Traveling overseas is always a real travel adventure. Traveling to an unknown country overseas with a turbulent past is truly a real adventure. It’s always nice to have someone in that country looking after you whom you can go to, should things go off track. I recommend Salvadorean Tours with its manager Rodrigo Moreno to plan and execute a pleasurable travel adventure with few bumps in the road. As you know travel anywhere has its risks. If you wanted to be completely safe, you would stay at home and hope nothing happened. But in travel, more times than not, especially using a travel supplier and common sense, you are safeand well cared for.

El Salvador is remembered for its turbulent civil war of the 1980s, and when you travel there you will be told of its effect on the country. But with the 1992 peace accord, El Salvador is building a bright future. A small country in size, on the Pacific coast bordered by Honduras and Guatemala, the natural landscape is dotted by many volcanoes, now mostly dormant, which is a reminder of its geological birth. Viewed today as tourist attractions, they can even be seen surrounding the Capitol of San Salvador, and from your hotel room at La Mirador, a good home base for your exploration of the city via the sights arranged by Salvadorean tours.

You will certainly want to have a walking tour of downtown. Stop in for a brief visit to the crypt of the Metropolitan Cathedral of San Salvador where you can pay your respects to the revered Catholic priest, Oscar Romero’s impressive resting place. The interior of the cathedral with its stain glass is a testament to the traditional strength of Catholicism in the country.

For a modern worship venue a few blocks away is the Church of the Rosary with its inventive use of glass and concrete, along with sculptures and stations of the cross, in a more contemporary style, often made from left over metal from the church’s construction. From the outside it appears to be a dark and heavy structure but inside the symbolic gradation of light and the column free expanse is imaginative.

If you have our tour guide, Eduardo, you can’t help but see and be affected by his enthusiasm for his country and what it has to offer. To ease us into our first day we had an enjoyable lunch and cocktail at the Bennigans in the World Trade complex, accentuated by a spectacular panoramic view of the city. The attentive bar tender and the large portions were greatly appreciated.

In the evening we were treated to the upscale and trendy Mai Thai Restaurant in the multiplex mall, where owner Jamie gave us examples of his bartenders art and dexterity before tasting plates of a variety of his specialties. Next door is a contemporary nightclub/disco with a popular late night crowd.

For a more relaxed and organic entertainment venue, Rodrigo took us to the nearby town of Santa Tecla, where a main street is closed to traffic in the evening and the patrons of clubs and restaurants spill out into the night. This is an example of the community saying, “build it, ~ or provide it ~ and they will come.” They upgraded the street and buildings for seven blocks, and entrepreneurs and merchants moved in, and it’s now the place to be. Wished we could have stayed longer.

Before venturing out into the countryside, the real Salvadorian attraction, a quick visit to the Archeological Museum will give you a basic history of the country, and a walk through the Museum of Art gives insight into the contemporary mindset. The two museums are within walking distance along a very busy thoroughfare. From your hotel you can often take taxis almost anywhere in the city with a fare of $6.00. It’s good to note here, that the U.S. Dollar is the currency used in El Salvador and the electric current is 110 with familiar pug-in outlet configurations. These are comforts that make Salvador convenient for US travelers. You won’t find many English speaking people, other than at your hotel or your tour guide, but with a piece of paper of the address of where you want to go, taxis are no problem. It’s good to ask the price before departing.

On one of my solo taxi excursions I had to see the 1950s mansion, around which the modern Centro Commercial Galerias Mall was built. Because of its turbulent geological past, few very old structures survive – so this midcentury architectural conservation is a rarity. The multi-storied mall, complete with foodcourt and cinemas, is host to a variety of department stores and upscale boutiques. There is even a Starbucks on the top floor of the mansion. 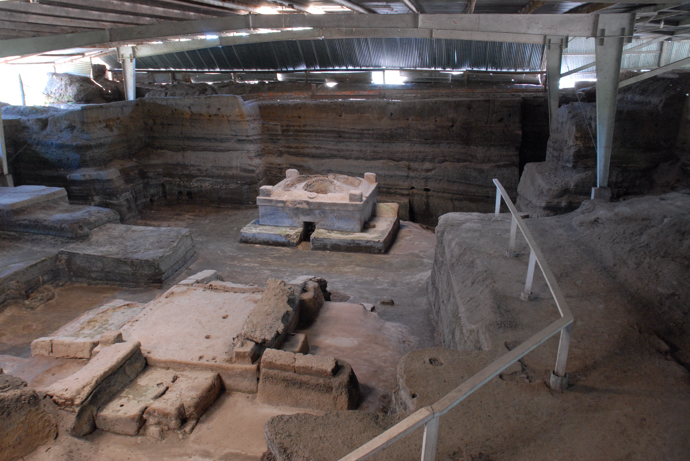 Preservation of the distant past is accomplished at the archeological site known as “Joya de Ceren,” which is a World Heritage Site, preserving the earliest structures of El Salvador’s ancestors. It’s called the “Pompeii of America.” Here also is a convenient small outdoor curio shop, where I found a modern clay figurine reminiscent of the ancient ones found in the archeological museum.