When a wine person speaks about the wine regions of Northern California, they usually mean Napa, Sonoma, and to a lesser degree Mendocino. When my cousin Colonel Lee Spechler invited me to visit him at his home in Penn Valley California near Beale Air Force base I looked at a Northern California wine map and realized there were lot of regions I had never visited. So began my 8-day driving journey from the San Francisco airport.

I love very early flights since the airplane starts here and so do the pilots. By Noon I was loading my Thrifty rental car and was off for my 85-mile drive to Davis. I was early for my 2:30 PM appointment with Dr. Roger Boulton, a professor in the Department of Viticulture (cultivation or culture of grapes) & Enology (science that deals with wine and wine making), so I checked in at the Palm Court Hotel and walked around downtown Davis, stopping at the US Bicycle Hall of Fame. The symbol for the town is a bicycle and they seem to outnumber the cars. Dr. Boulton toured me around the three academic buildings that are the Robert Mondavi Institute of Wine and Food Science, which opened in October 2008. The Enology Building and Cellar holds over 70,000 bottles of wine, some made by students and many donated by wineries. The Pilot Winery allows students to learn how to operate commercial-scale winery equipment. The adjacent UC Davis Vineyards are 120 acres of wine and table grapes. UC Davis has graduated more than 2,000 winemaker/owners. When people think of MIT for engineers or Harvard for the law, there is no other place like UC Davis for the study of grapes and wine making.

I was in Yolo County where 85% of the land is used for agriculture. There are a large number of artisan winemakers as well as 17 tasting rooms. Very few of the wines I tasted during my 8-day trip were available outside the wineries or their separate tasting rooms. That is the reason I was so excited about this trip. Great wines in very limited quantities and distribution. In 15 minutes I was in Winters where the Main Street business district is on the National Register of Historic Places. There were 6 wineries that came together so I could taste the best wines of the area, including Turkovich Family Wines, Route 3 Wines and Berryessa Gap Vineyards. It was less than an hours drive from Davis to The Old Sugar Mill (originally built in 1934) in Clarksburg, home to 10 winery-tasting rooms under one roof. Five of them are micro-wineries who make and process their wines at the Clarksburg facility. I met John Beckman, the owner of the Clarksburg Wine Company, a custom crush facility. They produce about 5,000 cases (one of the larger producers I tasted during this trip). I especially enjoyed the Chenin Blanc VS (Vouvray style) and Remenance (Cabernet Franc, Merlot & Cabernet Sauvignon) and the Petite Sirah.

I spent two nights in Old Sacramento, staying on the Delta King Hotel, the authentic riverboat that was renovated in 1984 and docked on the Sacramento River, never to move again. The Old Sacramento historic area is a national landmark and state historic park. It is a 28-acre site on the banks of the Sacramento River. The area now houses 125 shops, restaurants and museums. I had a whole day to walk to the Sutter’s Fort, California State Capitol, California State Railroad Museum, Sacramento History Museum and Crocker Art Museum. My highlight of the day was visiting Corti Brothers Fine Wine & Gourmet Foods Italian Grocery Store. To call this a grocery store is like saying the White House is a building. I first met Darrell some 40 years ago. His “specialty grocery store” was established in 1947, and Darrell is one of the world’s foremost authorities on fine wine and food.

Two hours heading southeast brought me into Calaveras County and the picturesque town of Murphys which has 25 tasting rooms, many known for rich red wines such as Syrah, Merlot, Cabernet Sauvignon, Tempranillo and Barbera. Mark Twain gave Calaveras County its claim to fame with his bestselling story ”The Celebrated Jumping Frog of Calaveras County.” My walking tour took me from the Old Timer’s Museum to the historic Murphys Hotel, in operation since 1856. Before my adventurous cave rappelling at Moaning Cavern Adventure Park I stopped at quirky Twisted Oak Winery for a tasting. I overnighted in a four-poster bed at the Victoria Inn in the historic district where I enjoyed dinner with the owner Michael Ninos. The next day was a two county day with the morning in Amador County, an hour north. Amador is old vines country; nearly 600 acres of the vines are at least 60 years old. This truly Gold Country, first settled in the early 1800s with historic gold rush towns. I did the mine tour at Kennedy Gold Mine and then visited Scott Harvey Wines as well as Bella Grace Vineyards in downtown Sutter Creek. It is known for Zinfandel, Barbera, Sangiovese, Syrah and Viognier. Another hour’s drive north brought me to El Dorado County. It sits at the north end of California’s famed Mother Lode, the 120-mile gold vein discovered in the late 1840’s, which became the site of the Gold Rush. Here the dominant grape is once again old-vine Zinfandel. I saw where gold was first discovered at Marshall Gold Discovery State Park and stopped at David Girard Vineyard. For the first time I got lost trying to find my evenings lodging. The Eden Vale Inn was located about 10 miles outside Placerville and Owner Mark Hamlin guided me mile by mile until I found his magnificent B&B featuring spa tubs, pool, fireplaces, patios and computerized lighting systems in an idyllic setting.

In 1 1/2 hours I was standing in front of my cousin’s house in Penn Valley. Colonel Lee Spechler has been in the Air Force for 19 years and has rented this 4 bedroom newly renovated house in a private gated community about 20 minutes from Beale AFB. We were almost immediately off to meet Lynn Wilson who owns Pilot Peak Winery in Penn Valley. There are beautifully landscaped terraces against the Northern Sierra Foothills where, during the summer, concerts are held. We had a walking tour of Grass Valley and an extensive tour of the Empire Mine State Park. The Sierra Vintners Winery Association arranged for a tasting of Grass Valley Wineries.

The next day Lee took me to lunch on Lake Tahoe (the largest alpine lake in North America- Placer County) after we drove through Truckee, over the Donner Pass, and through Squaw Valley (home of the 1960 Winter Olympics). We were back in time to attend a few hours of the Wild & Scenic Film Festival in downtown Nevada City. We met and tasted the wines from 5 wineries at the Nevada City Winery. At 10,000 cases they were probably the largest production of any winery on my whole trip. 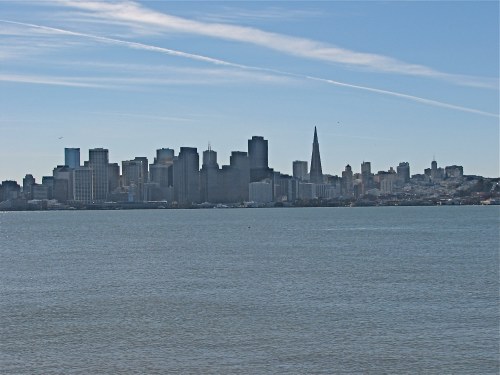