The endangered white rhino. The elusive silverback mountain gorilla. The rare tree-climbing lion. Hippos, elephants, crocodiles. The massive shoebill? Yup, him, too. These are just a few of the multitude of wildlife we cavorted with during our ElderTreks’s safari and trekking journey to southwestern Uganda. But the visit to the Kibale Chimpanzee National Forest to see the ever-playful chimps in the wild was one of the more delightful surprises. 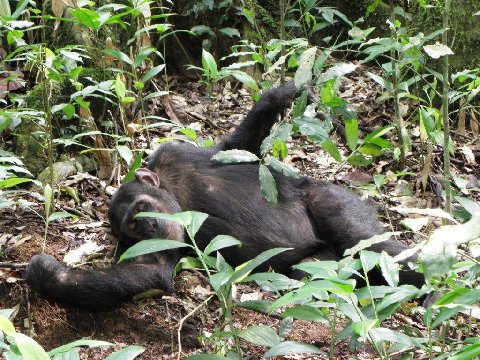 A quick briefing introduced us to the chimps said to share 98.7% of their DNA with us humans. 98.7! Already feeling an affinity, we split into smaller groups with an assigned guide carrying her assigned rifle. Were our relatives in danger? It seems elephants and buffalo also roam these grounds and are more aggressive than those seen on game drives where the animals are more accustomed to people in vehicles. The guides, we were assured, shoot the rifles only if necessary to scare them away.

Also armed, so to speak, with a number of rules governing our outing, we were told to stay 25 feet away, if lucky enough to find them on low-lying branches, to be quiet so that the guides can listen to the calls and not to mimic the sounds of the chimps — as if that were even possible — because you don’t know what you might be saying. I couldn’t help but think the chimp would probably turn down a date if I made the mistake of coming on to him.

Finally we took off through very dense forest. Lots of tweets and trills, whistles and warbles, cries and caws produced a symphony of sound which accompanied our walk. I knew our guide recognized every note and was thankful she didn’t feel compelled to share all that information with us. I’m pretty sure the resident bird watcher in our group would have preferred otherwise.

Our tracker did point out a variety of monkeys in the trees above but they were so high as to be indistinguishable from the leaves unless the branch was moving — and then, of course, it was already too late. Clearly, I would not make a good tracker — or birder.
The troop of chimpanzees we were tracking numbered 120 but because it was the end of September, our guide lamented that the chimps were harder to find because much of their nearby food supply had been exhausted. You might want to check ahead of time to see when the fig trees are bearing the most fruit — that apparently determines how many chimps you’re likely to see.

Due to this added challenge, we were diverging from the more standard trails and were pretty much blazing new paths. It had been over an hour and we were no closer to finding chimps. I, on the other hand, was more worried we’d never find our way back.
The guide, unfazed, claimed to have found our sought-after prey though those of us less technically proficient in chimp tracking could not yet see any. Still, ten pairs of eyes looked eagerly toward the tree tops, seeming miles away, to catch some movement, any movement, to justify our presence. Suddenly a cry of “There he is” erupted, quickly followed by a disappointed sigh of “Maybe not.”

And then an ear-splitting onslaught of a barking/howling/ screeching shriek indicated that yes, in fact, they were around. This gave us all hope but still, without any precise sightings. However, the periodic wailings breaking out in every direction were so loud and disconcerting as to be sufficiently exciting in themselves. When all of a sudden two chimps scrambled past within several feet of our group, we knew we had arrived. “Now that’s more like it,” someone declared!

We literally followed in their footsteps through the bush to find what our guide later insisted was a rare occurrence: an 18-year-old adolescent lying upon the ground in apparent repose, head resting on hand, taking time out to occasionally scratch and snort, totally ignoring our large semi-circle of astonished gawkers. We all forgot how frustrated we had been just moments before. Watching this young lad — whom the guide identified as Enfunzi — so close up did make me question a bit that 98.7 DNA statistic. Not that we don’t scratch…

Although our overall excursion took three hours, a number of very satisfied “wows” punctuated its end. And I was wrong about the tracker — she did indeed know the way back! And if seeing the chimps in the wild only whetted your appetite for a little more chimp exposure, an hour-long boat ride to the Ngamba Island Chimpanzee Sanctuary near Entebbe just might do the trick. Home to 48 chimps rescued from a multitude of adverse conditions, whether as orphans, victims of illegal activities, or needy of medical attention, these guys roam free on 95% of the 95-acre forest. The other 5% is devoted to feeding the chimps and keeping them safe at night. 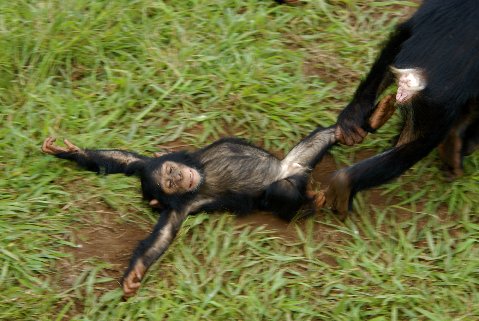 Our approach to view their 2 p.m. feeding was vociferously announced by loud guttural screeches, either as a chimp welcoming committee or an entreaty to leave — it was hard to tell. As it turns out, the greeting wasn’t for us at all but for the large alpha male approaching from the opposite direction. I was relieved we had not been the ones to elicit such a thunderous response. Okay, you’re not seeing them in the wild exactly but you’re seeing a lot more a lot more openly — and they are indeed fun to watch. In between eagerly devouring their lunch of carrots, oranges and pineapples, they scratched themselves and each other, chased each other around, fought over food and generally entertained their human luncheon guests.

Another rowdy fracas erupted when a larger chimp stole food from a smaller companion who loudly called out to his friends for reinforcement — and they rapidly responded forcing the perpetrator to relent and give back the food. Hey, they’re just like people.
As soon as the guys had ingested a sufficient amount of munchables, they headed back to the forest to play, gambol about, climb the branches or rest free of human intrusion. And we got to leave with new respect for our closely aligned cousins with whom we share so much DNA – except, of course, for all that scratching… For more information, visit eldertreks.com which promotes “Exotic Adventures for Travelers 50 and Over.”