The Barcelona Airport information agent answered my question without hesitation, “See as many pieces of Gaudi’s works as possible.” Not the food, not the shopping, not even the famed Las Ramblas. I had done my homework, reading up for my trip. Architect and designer Antoni Gaudi, who lived 1852 – 1926, is the most internationally prestigious figure in Spanish architecture. He is also one of the most revered personalities in Spain, particularly in Barcelona where his work is concentrated.
Catalonia is an autonomous region of Spain in the north-east portion of the Iberian Peninsula, with the official status of a “nationality.” Its capital city is Barcelona, the center of “Modernisme,” the term depicting a cultural movement by the people of Catalonia for national identity. And Gaudi is generally considered the grand master of Catalan Modernism in its heyday. World architectural experts have hailed his work, while adhering to Modernisme, to even go beyond that, being characterized by the predominance of the curve over the straight line, the expression of asymmetry, and the integration with various crafts such as stained glass, wrought iron forging and carpentry. 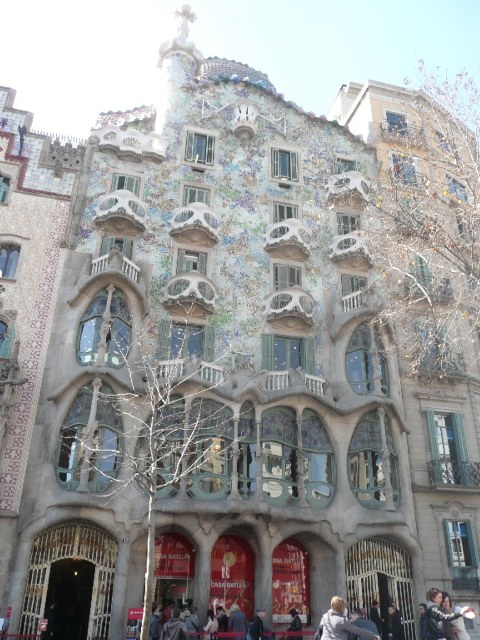 Well, one would be hard-pressed not to see it as he approaches it. And I was no exception. Casa Batllo’s front façade sure looked like a bunch of bone features to me, a layman when it comes to architecture. In fact, I later found out that the locals call it “Casa dels ossos” or the House of Bones. Built in 1877, it was restored and partially remodeled by Gaudi during 1904 – 1906. He focused on the facade, the main floor, the patio and the roof, and built a fifth floor for the staff. The facade is of Montjuic sandstone cut to create warped ruled surfaces, the columns are bone-shaped with vegetable decoration. Gaudi kept the original rectangular shape of the building’s balconies – with iron railings in the shape of masks – giving the rest of the facade an ascending undulating form. He also faced the facade with ceramic fragments of various colors (“trencadis”), which Gaudi obtained from the waste material of the Pelegri glass works. The interior courtyard is roofed by a skylight supported by an iron structure in the shape of a double T, which rests on a series of caternary aches. The helicoidal chimneys are a notable feature of the roof, topped with conical caps, covered in clear glass in the center and ceramics at the top, and surmounted by clear glass balls filled with sand of different colors. Much of the facade is decorated with a mosaic made of broken ceramic tiles (“trencadis”) that starts in shades of golden orange moving into greenish blues. The roof is arched and likened to the back of a dragon. At the first floor level of the undulating facade is a striking stone structure in the form of loggia supported by columns with frame fine windows decorated with stained glass. The ceramics and multi-colored glass mosaics of the upper part are interrupted by iron balconies in the form of venetian masks. Crowning the whole is a suggestive tile roof over double garrets, which evokes the back of a dragon. Casa Batllo gained UNESCO World Heritage status in 2005.
Casa Mila, better known as La Pedrera, was designed by Gaudi and built during 1905 – 1910. What a humongous building, I thought to myself, as I first saw it standing at the corner located at 92 Passeig de Gracia in Barcelona’s Example district. 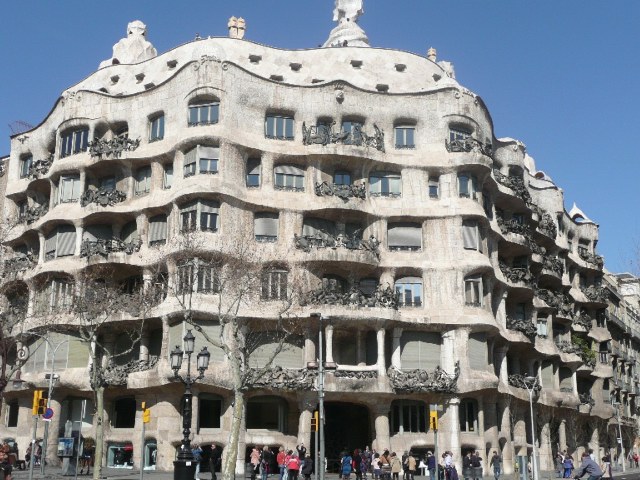 The brochures available at its gift store combined with my walk-through helped me to really appreciate what a fine and unique piece of architecture La Pedrea is. Gaudi designed the house around two large, curved courtyards, with a structure of stone, brick and cast-iron columns and steel beams. The façade is built of limestone from Vilafranca del Penedes, apart from the upper level, which is covered in white tiles, evoking a snowy mountain. It has a total of five floors, plus a loft made entirely of caternary arches, as well as two large interior courtyards, one circular and one oval. I particularly noticed the roof, topped with the four-armed cross, and the chimneys, covered in ceramics and with shapes that suggest mediaeval helmets. It was a controversial design at the time for its bold forms of the undulating stone façade and wrought iron decoration of the balconies and windows. In 1984, Casa Mila was declared World Heritage by UNESCO. Another interesting fact is that Gaudi wanted its occupants to know each other so he designed lifts on every other floor only so people had more interaction and thus had to communicate with one another from different floors. 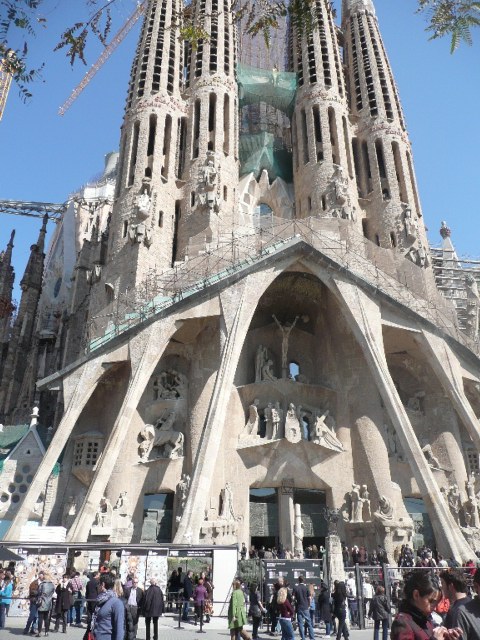 Perhaps his most famous work, during the last years of his career, Gaudi devoted almost exclusively to Sagrada Familia, a monumental church to say the least, whose formal name, in English, is Basilica and Expiatory Church of the Holy Family. I arrived at a morning hour that I thought was early, but the line of waiting visitors had already stretched from the front around to the left side of the cathedral, with more visitors to follow as the minutes ticked. Across from it, on limited open space ingenuous merchants had set up shop, selling a wide variety of souvenir items and snacks. In fact, on the sidewalk slightly from the curb, merchants had placed at various spots small tables and chairs for those who just wanted to sit, have a soda, relax and take in the majestic view of Sagrada Familia. I overheard from a passing tour guide that the wait to get inside the cathedral was going to be almost two hours. Taking a cue from other visitors, I bought a cold soda and some snacks and quickly grabbed an empty chair and claimed the table nearest to it. This was going to be my base for taking in the grandeur of the Sagrada Familia. 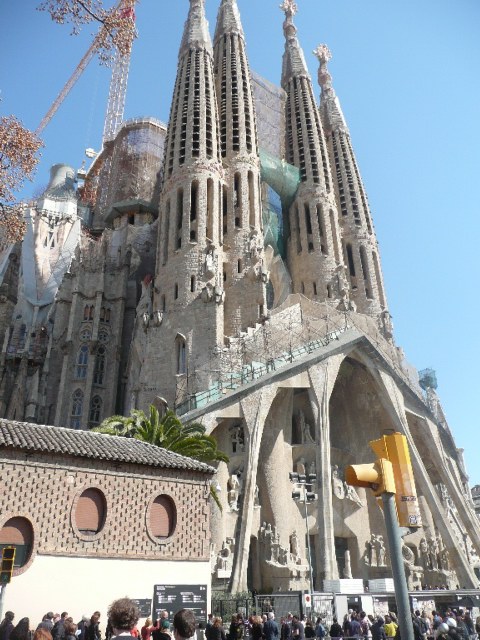 Among the many expert comments I read, Sagrada Familia can be summed up as Gaudi’s achievement of perfect harmony between structural and ornamental elements, between plastic and aesthetic, between function and form, between container and content, achieving the integration of all arts in one structured, logical work. It is probably the most remarkable cathedral in Europe, and it’s not even finished yet! It was in an unfinished state at the time of Gaudi’s death in 1926, the work stopped in 1936 and resumed sixteen years later in 1952. Projected completion is in 2026, the centennial of Gaudi’s death. At completion, there would be extraordinary facades representing the birth, death and resurrection of Christ with eighteen towers or spires symbolizing the twelve Apostles, the four Evangelists, the Virgin Mary and the Christ. UNESCO bestowed 2 titles of World Heritage status – one for the Nativity façade and the other for the crucifixion façade. I could see that visitors may be confused into thinking that these facades represent the front and the back of the cathedral, when in fact they are actually the sides. 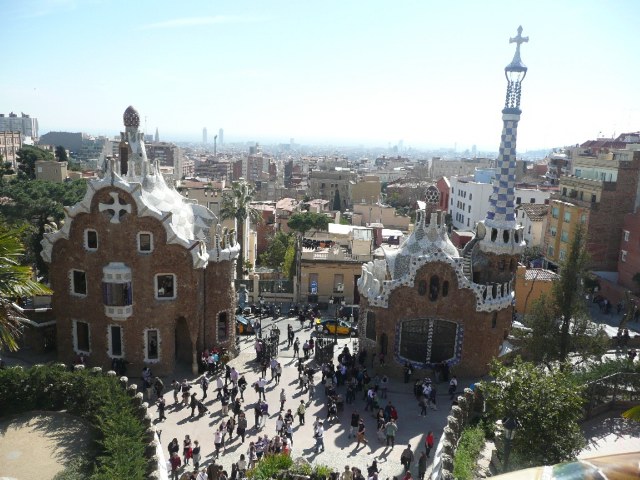 Locals I encountered invariably mentioned Parc Guell, a municipal garden on the hill of El Carmel in Barcelona’s Gracia district. On a pleasant Spring morning, I started off from Placa de Catalunya, the huge square just minutes by foot from my hotel, by taking the #24 bus. I had deliberately planned this particularly long ride, with the idea of leisurely seeing the various Barcelona’s neighborhoods from one end of the city to another. Parc Guell was originally part of a commercially unsuccessful housing site; of sixty lots, only two houses were built, and Gaudi occupied one of them from 1906 to his death in 1926. Among the many examples of Gaudi’s designing genius evident here is the huge plaza, surrounding by a long winding bench in the form of a sea serpent. The bench has small semi-enclosed areas where the facing of a brightly colored ceramics creates a spectacular collage.Declared a UNESCO World Heritage site in 1984, at its highest point Parc Guell offers a panoramic view of the city and the bay, including the Familia.