After the full day’s eyeful feast of Gaudi’s works, I was ready for a feast of another kind. For that, I followed the recommendation of a colleague and dined at Los Caracoles Restaurant, conveniently located off the city’s famed La Rambla, just a two minute walk from Reial Plaza.

I found this restaurant to be a combination of old world charm and very fine food. Started in 1835 by the Bofarull family as Casa Bofarull, it is run by its fifth generation under the more fitful name of Los Caracoles to reflect a signature dish of snails. As I stepped inside, I could see the long exquisite bar on the left and the big stove in the open cooking area on the right. I later found out that the coal-burning stove is over one hundred years old.

I made my way straight through about 15 meters (50 feet), slowly and at times even stopping, turning my head left and right, to admire the beautiful bar and the impressive cooking facility. At its end, I was greeted by a gracious woman who introduced herself as Aurora.

She led me through several floors of dining areas, some with private dining rooms of various sizes whose walls were hung with framed pictures of Spanish and international celebrities who have dined at Los Caracoles over the years. On one of the pictures, I recognized the famous Italian opera singer Luciano Pavorotti. After an appetizer plate consisting of garlic shrimp, bread with tomato, jamon (Iberian ham) and snail bread, I ordered the caracoles (snails) without hesitation.

When they came, I could smell the sauce, and went right to work on them with both hands. I was sure the sauce mix was proprietary but could taste that it included fresh garlic, a bit of salt and black pepper, olive oil and mint springs. 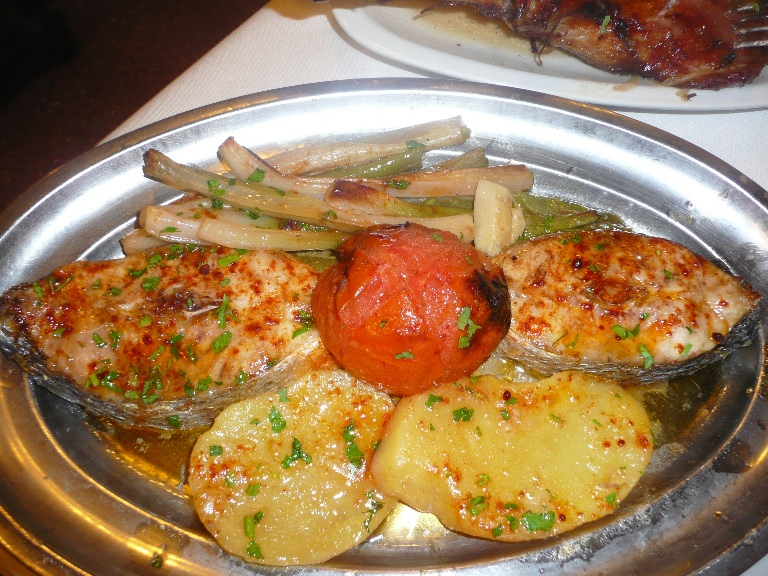 Next came the entrée, salmon “house style,” and what a dish. Just mouth watering and freshness of taste. I especially liked its accompaniments – lightly fried potatoes, green onion stalks, and tomato. While the restaurant has an extensive wines list, I opted for a pitcher of sangria and it served me well throughout the course as I enjoyed the delicious meal. For dessert, it was Catalan cream, similar to crème brulee. I had of course tasted flan, custard, or crème brulee, but this one was unusually rich and savory. All in all, a very fine dining experience for elegance and flavor.