The Mexican Mayan Riviera (South Cancun) is, in short, a public relation dream of a name. First and foremost, let’s get the geography lesson out of the way; Quintana Roo is a state in Southeastern Mexico on the eastern part of the Yucatan Peninsula with a population of 1.3 million. The Caribbean Sea is to the east and the nation of Belize is to the south. If the name Quintana Roo is not familiar, look at some of the cities contained within the state; Cancun (800,000), Playa del Carmen and the island of Cozumel enhanced further by the Mayan Ruins at Tulum, Oxtankah, Coba and Kohunich among others.

In the late 1960’s the Mexican government built the city of Cancun from a small fishing village to attract more American tourists to the area. In 2012 there were over 1.6 million visitors from the US. The hotel zone spans approximately 16 miles with more than 34,000 rooms in Cancun and 40,000 in the Riviera Maya (the largest number in Mexico). There are condos and resorts facing the Caribbean, plus over 2,000 stores. On the island side is Laguna Nichupte with marinas, restaurants, shopping malls, two golf courses (there are 13 in the Cancun/Riviera Maya area) and a few islands. There is only one road so you can’t get lost. Forty minutes southbound and you are at the airport, which is the second busiest in Mexico (after Mexico City). The “Party Zone” is halfway between the Hotel Zone and downtown and is filled with nightclubs and discos.

Leaving New York City in mid-March for 80-degree weather was a tough choice when I was invited to the 2nd Annual Cancun-Riviera Maya Wine & Food Festival. Founder & CEO David Amar explained the difference between this four-day celebration and other food and wine festivals: “We donate a portion of the receipts to Cancun’s City of Joy which houses, under one roof, children living in extreme poverty, the elderly living alone, a hospice for the terminally ill and women victims of domestic violence.”

The festival alternates its events between the two areas in their name. Even though I was staying in Cancun at the Fiesta Americana Coral Beach Resort & Spa all the events this year took place in the Riviera Maya area, less than an hour’s drive from Cancun. During the four days there was a delicious array of gourmet foods, interactive wine & spirit seminars, late night parties and entertaining cooking demos. 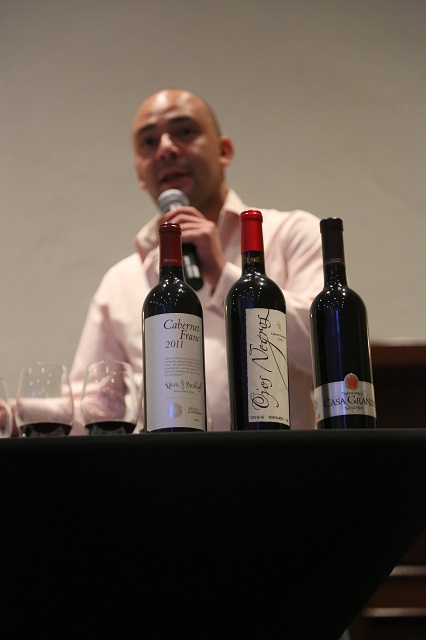 The Thursday opening event was a press conference for guests of honor chefs Massimo Bottura & Enrique Olvera. Chef Massimo’s restaurant Osteria Francescam was ranked #5 in the world, has 3 Michelin Stars and is located in Modena, Italy. Chef Olvera’s restaurant Pujol is in Mexico City and was ranked #36. There was a Star Chef Networking luncheon that was by invitation only. Typical dishes of Quintana Roo were prepared and cooked by women chefs. This was followed by a discussion on the future of cuisine. There were afternoon wine tastings on both Thursday and Friday showcasing European and American wines. They took place at the Karima El Dorado Royale Hotel and cost $50 each. That evening at the Paradisus Playa del Carmen Hotel I spent a few hours at the Taste of the New World ($250) where 20 Star Chefs from the Americas exhibited their signature dishes alongside top wines, all in a beachfront location. I ran into New York friends Drew Nieporant (Corton/ Nobu) and Mark Ladner, the executive chef of Del Posto.

Each day Friday–Sunday in the late morning there were cooking demonstrations ($60 each) at the Karisma El Dorado Royale Hotel. Even as the chefs gave out insider tips and culinary advice I did note a sense of friendly competition amongst them. Saturday & Sunday afternoon at the Grand Coral Riviera Maya Hotel the American Express Gourmet Tasting Village took place. For $100 one could sample tapas and desserts from 20 restaurants located in Cancun & Riviera Maya, along with jazz and wine. Friday evening at Hotel Grand Velas there was a tribute dinner ($350) for Chef Massimo Bottura where three top Italian chefs from the United States and two sous-chefs from Massimo’s own restaurant Osteria La Francescana produced a five-course dinner paired with wines selected by MW/MS Doug Frost. Saturday evening at Restaurant Passion at the Paradisus Playa del Carmen Hotel Chef Martin Berasategui and Master of Wine/Master Sommelier Doug Frost held an invitation only dinner.

The closing event of the festival took place Sunday evening at Paradisus Playa del Carmen. This beachfront dinner ($150) featured music, fireworks and entertainment as Italy meets Mexico. The ingredients were all Mexican and top chefs from both Mexico and Italy prepared the food.

Total attendance for the 4-day festival was about 5,000 for the 25 events. Next year the event switches back to Cancun.
For More Information-
http://www.crmfest.com
http://www.cancun.travel