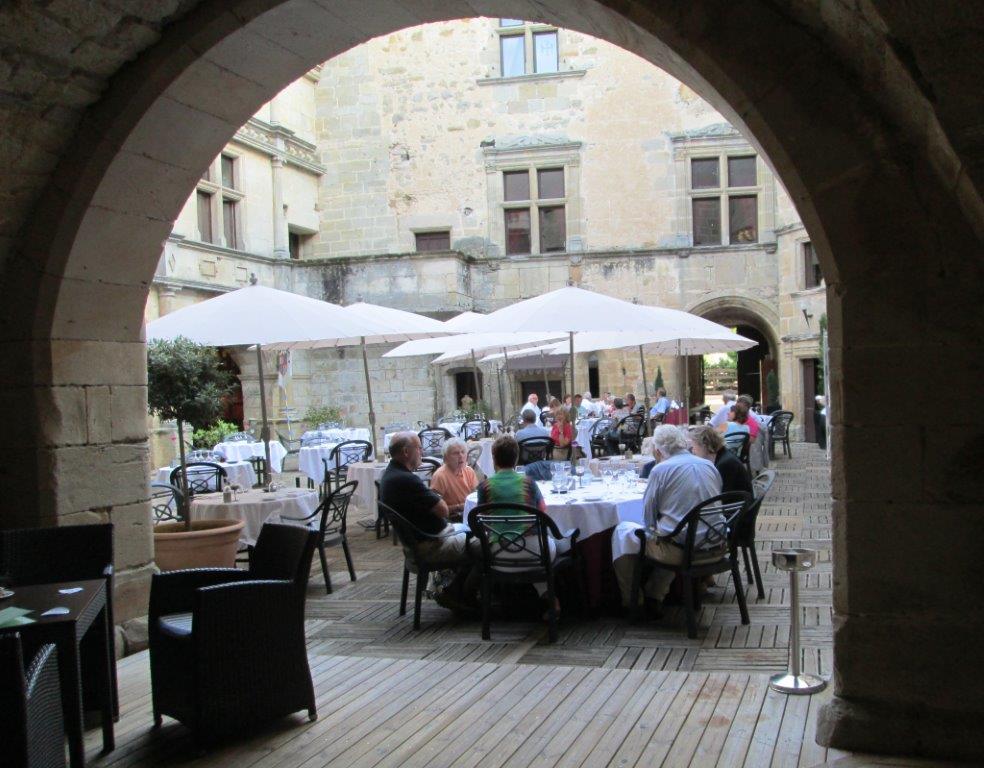 Climbing up the wide circular stone staircase to our hotel room in the Chateau des Ducs de Joyeuse on the first night, I knew this would be a very different trip. I could just as easily be accessing a medieval castle as a lodging facility — and then I found out I was. Although I suspect our room was a lot less drafty than those of the lords and ladies who preceded us.
Which certainly set the tone for our Walking Through History Tour of Southern France—conducted, ironically, by a company called New England Hiking. As we hiked through, around, up and over one medieval village after another, traversing castles and countryside and learning about the Middle Ages of the 11th-14th centuries, we were immersed in their history.
According to our guide, Richard Posner, every mountain, every hill, has great historic and cultural significance and his running commentary throughout the trip bore him out. Visigoth chateaux, Knights Templar towers, Cathar castles — admittedly I knew little about these guys but by the time we were done visiting their many abodes, I felt we were all old friends.
The walks ranged from easy to moderately challenging and the talks from fascinating to eyes glazed over, usually in direct proportion to the difficulty of the hikes when I might have preferred to be back at the castle courtyard relaxing with a vin de pays — but I was willing to wait. As one of our compatriots enthused about Richard: “He opens his mouth and facts fall out.” The fact that he could make these facts endlessly interesting was the real accomplishment.
Cresting a hill, I would often turn and look back down upon an expanse of beautiful countryside that was, of course, there the whole time, but I was too focused on putting one foot in front of the other to notice. As we walked, and everyone is encouraged to go at his/her own pace, we would come to a crossroads where multi-hued wildflowers whose fragrances accentuated the already-challenged senses, distant mountains, castle ruins, and crops of beans, vineyards and barley were all vying valiantly for attention — demanding notice in so many directions at once as to warrant whiplash.

Our first visit was to the tiny medieval town of Cassaignes that does not see a lot of drive-by traffic. Consisting of a few houses and churches dating back 900 years, the sense of history was somewhat moderated by the large red tractor by the side of one house that appeared anachronistic by several centuries. Still, it was a start.
As we traveled from one medieval village to another, we heard stories of church intrigue and love stories, military battles and religious controversies, mysterious anecdotes of priests and royals and other local residents over the centuries that brought the towns to life in a very tangible way. For one, in the 1890’s a priest named Berenger Sauniere sold secret medieval documents he found in the hollows of the church at Rennes Les Chateaux for great sums of money. Those documents? Well, does Holy Grail mean anything to you?
And every morning, Richard’s wife, Marion, scoured the market in preparation for our picnic lunch, composed of different breads, cheeses, fresh fruit, French sweets and some local village delicacy which we feasted upon overlooking a lake, a garden, a vineyard or some random medieval ruin. Every day, the same response — it just doesn’t get any better than this! 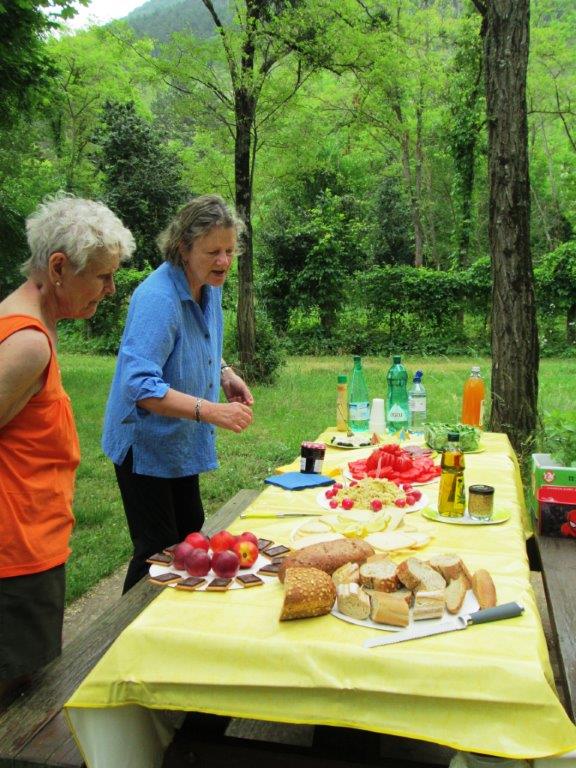 Accompanying us on much of our journey were the Cathars, Roman Catholic heretics who were prominent from the 10th-12th centuries, but were ultimately destroyed during the Crusades, and the Knights Templar, a well-financed military religious order of the 12th-14th centuries, and later rumored to be a secret society that exists to this day.
The impregnable Queribus Tower, the last of the Cathar castles to fall, was an old Roman structure, initially built in the 4th century. It was later refurbished by the Cathars to resist attack during the Crusades. The most recent restorations? They took place in the 13th century. This sort of time warp is ever present in southern France. The present and past – long-ago past — coexist harmoniously as one can travel back and forth through multiple centuries within a couple of hours of doing day-to-day errands.

As we climbed the almost half-mile straight up, I couldn’t help but think “Why would anyone want to attack this place?” Obviously, I wouldn’t have made a good candidate for medieval knighthood. Views from one tower to the next compete with each other for their own personal sense of wonder and enormity of vision. But then again, how often are you looking over a vast countryside from a 360 degree angle from multiple towers in a single day?
One morning early, Richard pointed knowingly to a small abbey halfway up a mountain. Our collective response was, “You’re kidding, of course?” He wasn’t. Not only did we make it to the abbey, we reached the top of the mountain. Admittedly, the ascent itself was much less challenging than it appeared, but we still all felt unduly proud.
Near Rennes les Bains, we stopped at Mount Cardou, where one of the most controversial of the Knights Templar theories is in evidence — that within the mountainside is a cave containing the buried remains of the body of Christ. Whether true or not, just standing there felt like a spiritual experience. The Knights were ostensibly eliminated as a religious order by the 14th century — although that may be a surprise to Dan Brown whose DaVince Code perpetuated many of these theories.
But nothing we had seen up to then could prepare us for Carcassone, one of Europe’s largest and best preserved fortified cities, an entire medieval town protected by almost two miles of double walls and 52 watchtowers.

Hard to imagine yourself walking among the knights, priests and ladies of the time with the proliferation of cafes and souvenir shops keeping you grounded in the modern world. Still, how often do you ask for directions to a bathroom and are told to take a right turn over the drawbridge? I managed to avoid the moat enroute…
Late in the evening or early in the morning when most of the tourists are gone, it’s much easier to imagine yourself a Cathar merchant meandering the cobblestone streets, through the maze of bridges, towers, concentric walls, castles, archways, tunnels and streets so narrow you can reach out your arms and touch both sides simultaneously. And then once they let the crowds back in, it’s possible to imagine another similarity to medieval times – only now the throngs, equally motivated, are coming to shop rather than siege.
As we left Carcassone, our exposure to medieval architecture and lifestyle wasn’t over, but our connection with the Cathars and the Knights Templar was, so it seemed an appropriate time to say au revoir.
For more information about the Walking Through History Tour of Southern France, visit nehikingholidays.com or call 800-869-0949.