From our itinerary we had no idea this would be a FULL day of travel! We flew about five hours from Santiago Airport to Punta Arenas, stopping briefly at Puerto Montt, which had the gorgeous backdrop of the Andes Mountains, two of which looked like Mt. Fuji and Mt. Ranier from our plane. We wish our tour had allowed time here in the Lake District of Chile.
We thought it would be a short drive to Puerto Natales. (We had not been able to find either on a map before we left home.) The transfer service who met us drove us to a tiny bus station near gorgeous manicured trees in a small park. We boarded a modern bus, which was comfortable, and we passed along the Straits of Magellan as we left Punta Arenas. This turned out to be a five hour journey through the sheep country near the bottom of the world. There were many views of Andes Mountains and small lakes, where we saw the native rhea (small ostrich) and wild pink and red flamingos in the background. This early December day was a bit misty and dreary. We arrived in late afternoon in Puerto Natales, which is on the Carreterra Austral, a long bay and natural inland harbor extending from the Pacific Ocean.
Our itinerary said it would be a short walk to our Hotel Erratick Rock 2, but we insisted on taxis for the several blocks because we all had lots of luggage. This place was like a log cabin with about 9 rooms around a grassy backyard. Each of the small rooms was comfortable and basic and very clean with modern private bathrooms, but we were told (throughout Patagonia) no paper in the toilets…only in the trashcans provided. We walked through the small town to the recommended restaurant Afrigonia. We were all in high spirits when we found the casual but elegant restaurant and had really delicious and unique dinners with excellent wines. We walked back about a half mile in the drizzle, stopping to shop at a really great curio shop of local items. 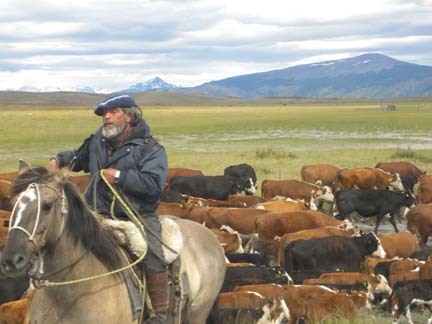 Our Hostelaria included breakfast the next morning and it was like being in someone’s home and we could order eggs or eat cold array. Several backpackers were fixing their own in the open little kitchen. We had all slept well and were eager for our 10 hour bus tour of Torres de Paine National Park of Chile. The weather started misty but grew brighter as we rode through gorgeous lake and mountain scenery. We passed a cattle round-up with huasos on horseback and dogs herding the vacas off the road. At one point we stopped to take pictures of the large herd of wild guanacos, the native llamas which are brown and white. 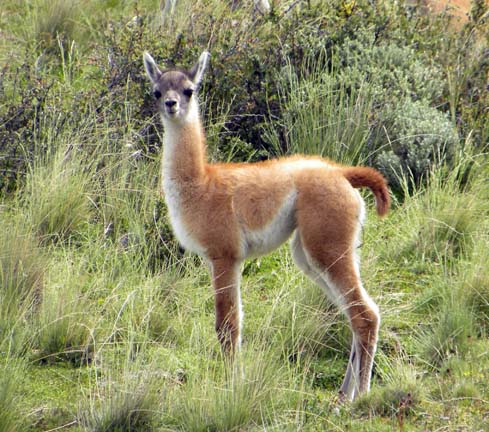 Here at the foothills and also high peaks of the Andes, the jagged rocks were softened by a covering of short, yellow-green, scraggly grass and sage/sorrel-like short shrubs where often we saw sheep grazing Our first stop en route to Torres de Paine was Mylodon Cave, which was discovered in 1895 and has become a protected historical site, important for its archeology and paleontology. Scientists have studied the geology here to learn that massive submarine avalanches started these hills while a glacial lake formed the caves eons ago. The remains of enormous herbivore animals found here from 14,500 years ago were similar to sloth, horse, and guanaco (llama). These were preyed upon by saber-toothed tiger, Patagonian panther and bear, all huge animals compared to their relatives today, and finally disappeared 10,000 years ago when climate change was a huge factor. The cave also revealed that nomadic human inhabitants lived here 11,000 years ago, perfectly adapted to the climate of Patagonia. 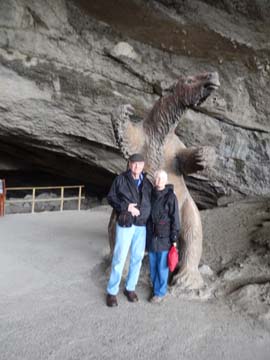 Mylodon Cave Trail also introduced us to the native trees and flowers of Patagonia. We learned about the lenga, nirres, and coihue of Magellan forests around us and the flowering shrubs calafate, and lenadura. We saw lovely yellow capachito (lady’s slipper), pink chilco and tiny white orchids. Many birds, grey fox, and large skunks also live here, as well as pumas. The long views in Ultima Eperanza reveal the paths of the glaciers, lakes, and ice of the gorgeous snow-capped Andes in the distance. 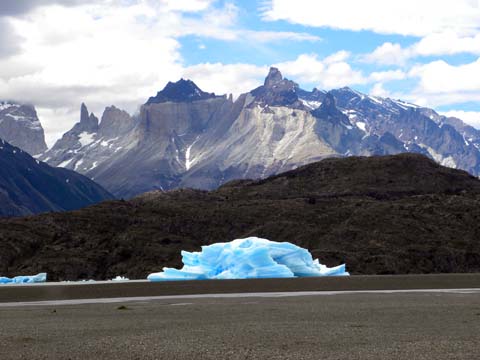 During our all day tour we stopped at lakes, a rushing waterfall, and enjoyed a long walk to see the icebergs of the Grey Glacier, which was around a bend and too far away for us to see. We wished for time to take the boat there. The icebergs were huge and the deep blue color, which indicates thousands of years of compressed snows. We had a delicious grilled buffet in the Parrilla Pehoe Restaurant within Torres de Paine National Parque, where we saw many birds including colorful large scavengers. Torres de Paine was exquisite and the long day of site seeing was over too soon. 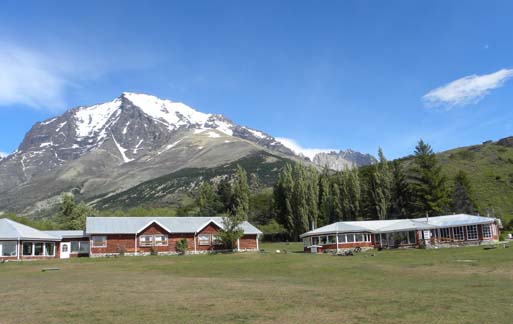 The Hotel Torres de Paine van picked us up after the tour van left us at Latuna Marga in the middle of nowhere, which was the typical pickup point for all tourists staying in the park, but we were happy to see the van arrive. Everything in Patagonia is very punctual. The hotel was fabulous! We were all delighted to stay two nights to hike and take photos of the gorgeous scenery. It was very, very windy but we had lovely sunshine and beautiful blue skies. Pollution is nil, so everything is brilliantly clear.
Our evening meal was casual in the lovely lodge dining room where an enormous and elegant buffet was served. No matter where we eat, dinner seems to be about $30 with wine and dessert, coffee, and cocktails. Although I’m sure the water and raw salads are safe all over Chile, we had been warned to prevent problems by drinking bottled water and eating no raw vegetables. Water was about $3 a small bottle, equal to beer or wine. Prices were the same throughout Patagonia. The next day we had a leisurely late breakfast in another huge buffet in the lovely dining room, I never knew there could be so many delicious breakfast selections. We saw the eco-tourist accommodations in geo-domed tent-like yerts just down the hill from the hotel and were so very glad to be in the luxury of this hotel.
http://www.allsouthernchile.com/pan-american-highway-in-patagonia.html http://www.tripadvisor.com/Restaurant_Review-g297400-d1650862-Reviews-Afrigonia-Puerto_Natales_Magallanes_Region.html
http://www.interpatagonia.com/paseos/cueva_milodon/index_i.html
http://www.torres-del-paine.org/