At Grand Hotel Villa Serbelloni in Bellagio, Italy, a pleasant-mannered manager will let you know that some guests come back to vacation here for decades, and that some suites are booked for years ahead. What life! Even a short break by the serene Lake Como framed by palm trees and wisteria shrubs with snowy Alpine peaks on the background have a miraculous power to sooth and restore your sole. I’ve found myself in a constant state of quiet exaltation while basking in the calm and beauty of this magical part of the world at the beginning of this year’s spring-summer season. Bellagio – the real thing, not a Vegas casino resort – is a picturesque little town in Lombardy, with “beauty” (bella) imbedded in its very name. However, the historical sources attribute it to the Latin Bilacus (two lakes) since the “pearl of Lake Como” is located between the two long “legs” that comprise the lake’s shape of a “running man.” Ancient Romans, who gave this place its Latin name, came to appreciate this uniquely magnificent area, poetically described by the consul and writer Pliny the Younger who owned real estate here in the first century CE. In a letter to his friend, he described two of his villas – one “high up on the rocks” and another “at its feet… on the lake shore” as metaphors for Tragedy and Comedy. “Each has its attractions… This one embraces a single bay with a gentle curve, that one stands on a prominent outcrop dividing two bays. That one does not feel the waves, this one breaks them. From that one you can watch the fishermen, from this one you can fish yourself…” Since then, very little has changed in the charming appearance of the crystal-blue glacial lake.

Grand Hotel Villa Serbelloni by the water edge was built as a summer home for the wife of Count Frizzoni, and inaugurated on her birthday in 1854. For some reason Contessa hated “the wide arches, the portico, the cornice with garlands and cherubs, all combined to give an air both sober and enchanting… the most classical of Italian gardens, laid out on different levels with a spectacular stairway linking the levels of the villa with those outside…” and many other breathtaking features admired by her contemporaries. The villa was immediately sold, changed hands a couple of times, and eventually accepted its new successful destiny as a grand hotel. At the end of the WWI in 1918 it was acquired by a Swiss hotelier Arturo Bucher. Thanks to his many innovations and improvements (like in-room bathrooms), extreme attention to the quality of service, and his diligent preservation of the original décor and furnishings, the hotel became highly popular with British lords, Spanish royals, Russian nobles, American presidents, and Hollywood movie stars. Today, the Grand Hotel Villa Serbelloni is owned and operated by the grandson of Arturo Bucher – Gianfranco Bucher and his wife, Dusia – a Polish woman who came to Switzerland in the 1990s to study hospitality and met her future husband there. The hotel director Giuseppe Spinelli and manager Antonio Calzolaro have been working here for several decades, overseeing the many levels of supreme hospitality and excellent customer service felt on every step in the luxurious rooms and lavishly decorated halls of Villa Serbelloni. On the night of our arrival I couldn’t tear myself off the wide open window of our room overlooking the lake. A full moon high above the outlines of palm trees was reflected in the pool in front of the hotel and filled it with its silvery calm. The night was quiet and profoundly blue. The gradually cooling night air was fragrant with spring blossoms.

In the morning, our delectable European breakfast was served at the opulent Salone Reale with frescoed ceiling, mirrored walls, and Murano glass chandeliers. Micheline-starred Executive Chef Ettore Bocchia reins at the hotel kitchen, supplemented daily with fresh produce from the neighboring villages and other regions of Italy. One of the hotel restaurants, La Goletta, serves fish from the lake, house-made pasta, and endless varieties of pizza. At the other – an upscale Ristorante Mistral, Chef Bocchia demonstrates his talent and skill in molecular cooking, being the first chef in Italy to appropriate it in his Mediterranean dishes. His method is based on scientific approach to the processes of heating and cooling with a goal of preserving the nutrients of fresh row ingredients. On the night we dined, chef’s tasting menu included Sicilian red prawns with guacamole ice cream, coconut cream, and cuttlefish ink waffles; tortellini with peacock breast meat and chanterelles; turbot fried in sugar; low-temp cooked veal with inuline sabayon, and baked pineapple with nitrogen-frozen ice cream. At the Villa Serbelloni Spa several types of heavenly massage await a weary traveler, as well as an indoor pool – a nice alternative to the beautiful outdoor one in inclement weather. At the hotel lobby, live music plays every night, way into the starry hours, and there is no reason to leave the premises of the enchanted villa ever… ever… but it would be unwise to miss all the other attractions of Lake Como that are so close to the central location of the grand hotel. 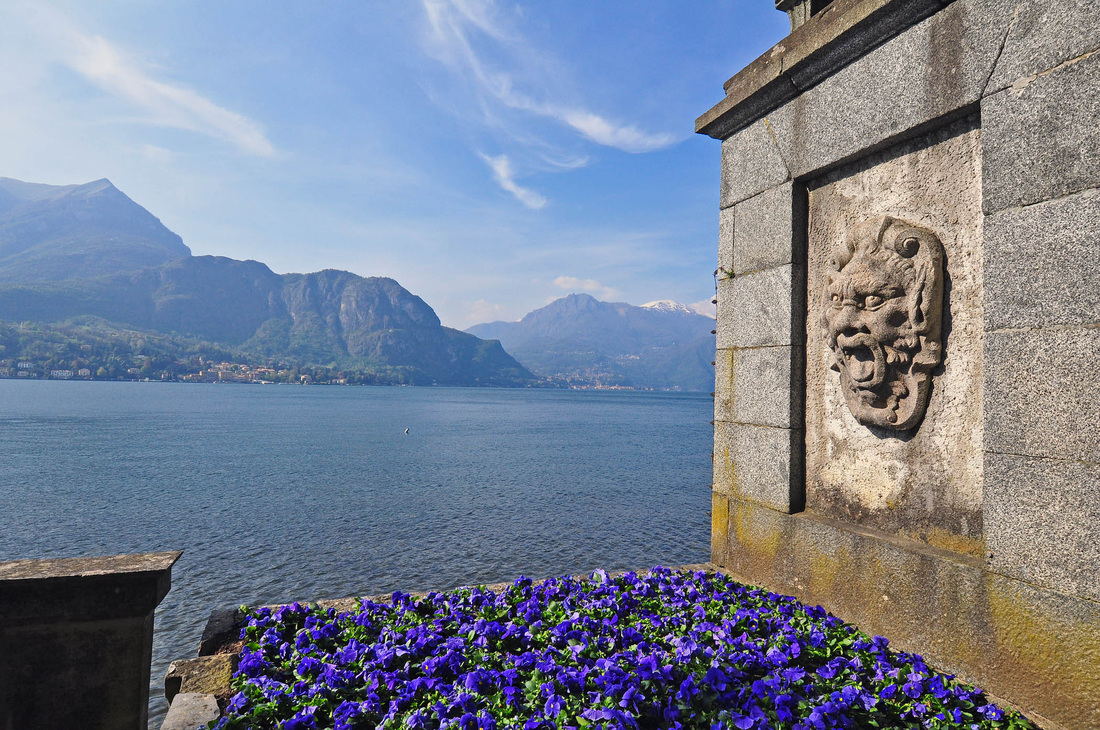 Next day, after a short shopping excursion to the Bellagio boutiques selling everything from marinated porcinis to Como silk shawls and Italian leather footwear, we sat for lunch at Ristorante Bilacus before taking a walking tour of Villa Melzi. Known for its gardens with century-old camellias, azaleas, and rhododendrons, the villa built by Francesco Melzi d’Eril (1742-1816) the former vice-president of the Italian Republic, contains his collection of ancient Egyptian, Greek, and Roman sculptures placed everywhere among the plants.

The stunningly majestic Villa del Balbianello in a town of Lenno on the opposite shore of the lake was built as a residence for Cardinal Angelo Maria Durini at the end of the 18th century. Lately it belonged to a world traveler, North Pole explorer, and the conqueror of Mt. Everest Guido Monzino, who left it in his will to Fondo Ambiente Italiano – a non-profit safeguarding Italy’s artistic and natural heritage. Due to its inimitable beauty and romantic atmosphere the Villa “starred” in Hollywood movies Casino Royale and Star Wars II: Attack of the Clones. In the middle of the lake there is one and only small island of Comacina, formerly a sacred site of Roman temples and consecutive churches. Back in 1169, the island fell victim to its siding with Milan against Como, and was burnt to the ground and cursed for centuries. Today, a very popular restaurant Locanda dell’Isola Comacina stands strong in defiance of the ancient curse, serving the same elaborate menu to crowds of tourists since 1949. 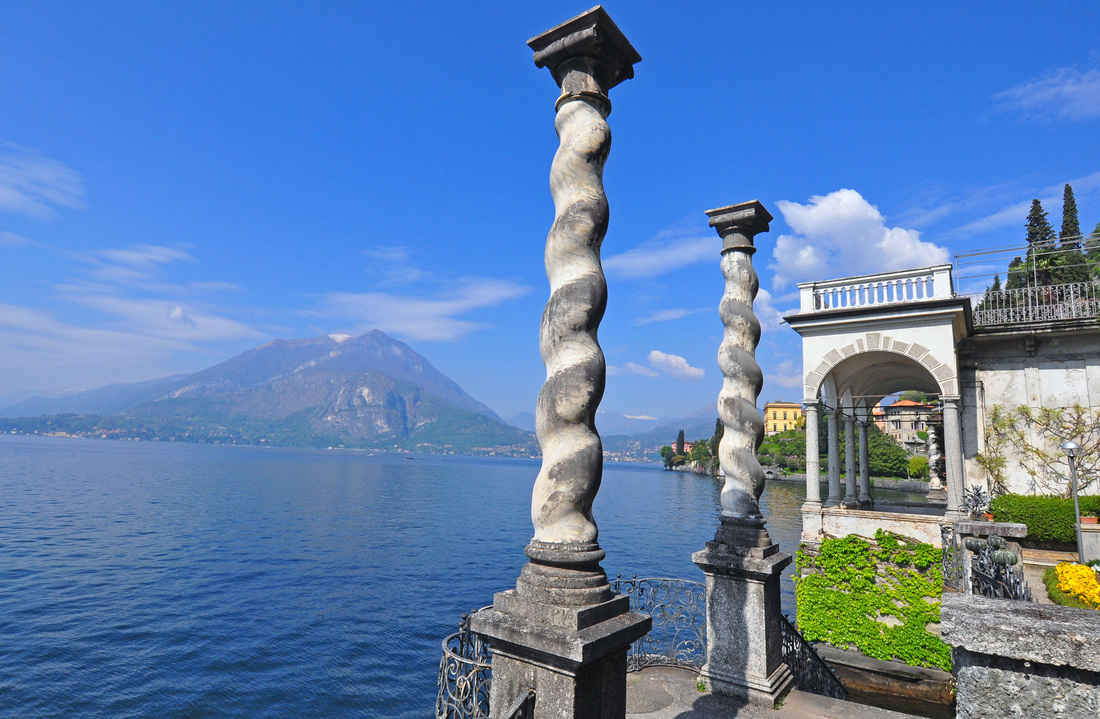 In the town of Varenna, which incidentally became a new home to Comacina’s exiled population, Villa Monastero presents another shining example of a wonderfully preserved historic dwelling. First, it was home to a monastery, and then was transformed into a temple of science by its 20th century owner, Marco de Marchi. A site of many international scientific conferences, the villa hosted Enrico Fermi in 1954 – an event, commemorated by a bronze plaque in a former chapel turned into a lecture hall. Every room at the villa is decorated in a different style and meticulously furnished with period antiques, like the gothic Sala Nera with exquisitely carved walnut, or rococo Sala Rosa with red silk upholstery and gilded wood. From the terrace of Villa Monastero you can see all three branches of the “running man” lake, and a 500-year-old magnolia tree still blossoming with heavy white flowers. There is a small botanic garden in front of the villa with Gian Battista Comolli’s sculptural group La clemenza di Tito “The Clemency of Titus” in white marble in a striking neoclassical style. It depicts the Roman Emperor Titus, his wife Vitellia and his friend Sextus, her accomplice in Titus’s failed assassination attempt. With Sextus and Vitellia repenting, the kind emperor pardons the conspirators with dramatic hand gestures. After a highly educational tour of the villa it feels good to relax at lunch time in a modernly designed dining room of Varenna Mon Amour restaurant with a glass of local white and a plate of frutti di mare supplemented with Lake Como fresh catch. More information and room reservations at: http://www.villaserbelloni.com