If there’s a better season than winter to experience California desert I’d like to hear about it… or better yet see it for myself. Meanwhile, when record freeze was bracing the American East and Midwest, and pouring rain (finally!) was falling all over the San Francisco Bay Area, the sun was shining brightly, and palm trees were gently swaying over blue pools in a charmed corner of the world known as Greater Palm Springs. It took us several hours in a problem-free Enterprise Rent-A-Car vehicle to get there from SF, and slightly over an hour to get back on Alaska Airlines uneventful flight for an exciting and relaxing. 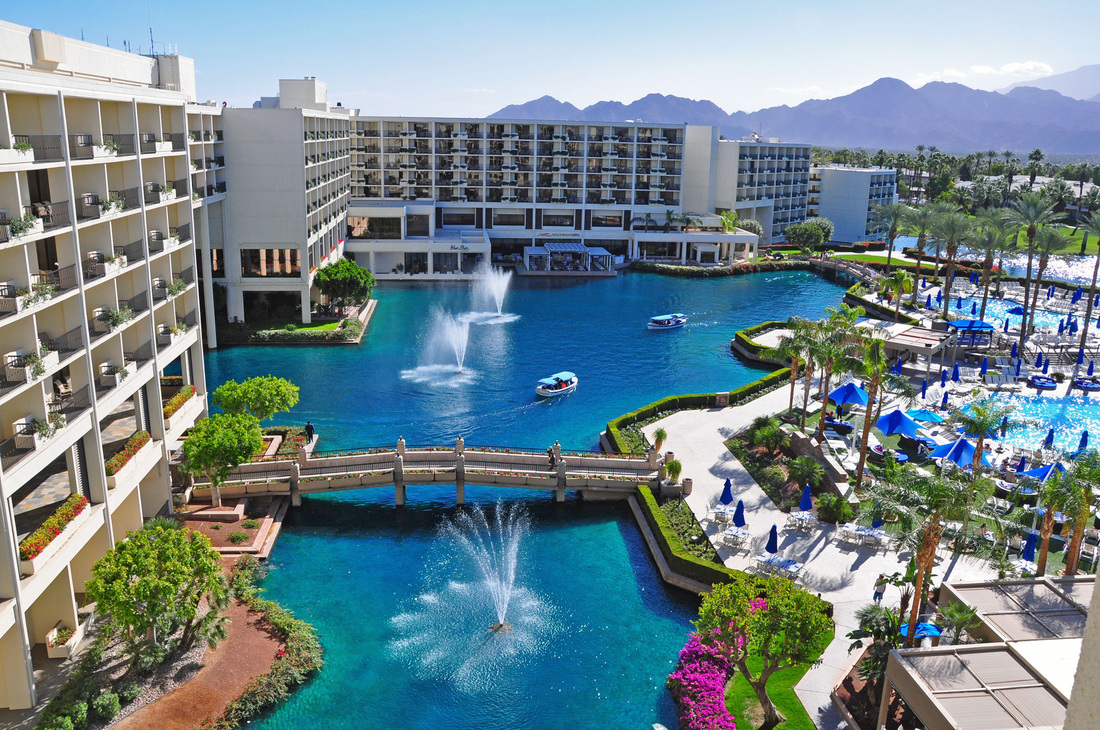 Located in Palm Desert, this aquatic oasis is designed to satisfy every whim of its guests so they would never want to venture beyond its 450-acre territory. Several eateries on the premises include the Lobby Bar and the Sushi Bar; Starbucks – also in the hotel lobby; voted “Best Seafood Restaurant” Fisherman’s Landing Market & Grill; and a few full-service restaurants on the shores of the resort’s own lagoon – poolside Oasis grill, waterfront Rockwood Grill, Blue Star Lounge, and Mikado, a Japanese steakhouse with teppanyaki dining. To get there, diners can board one of white-and-blue speedy boats that take passengers in the open-air lobby area and bring them back every 10 minutes. The lagoon, adorned with fountains and populated by black and white swans, geese, duck, carp, and pink flamingoes, stretches to the far reaches of the five heated pools and two 18-hole championship golf courses. 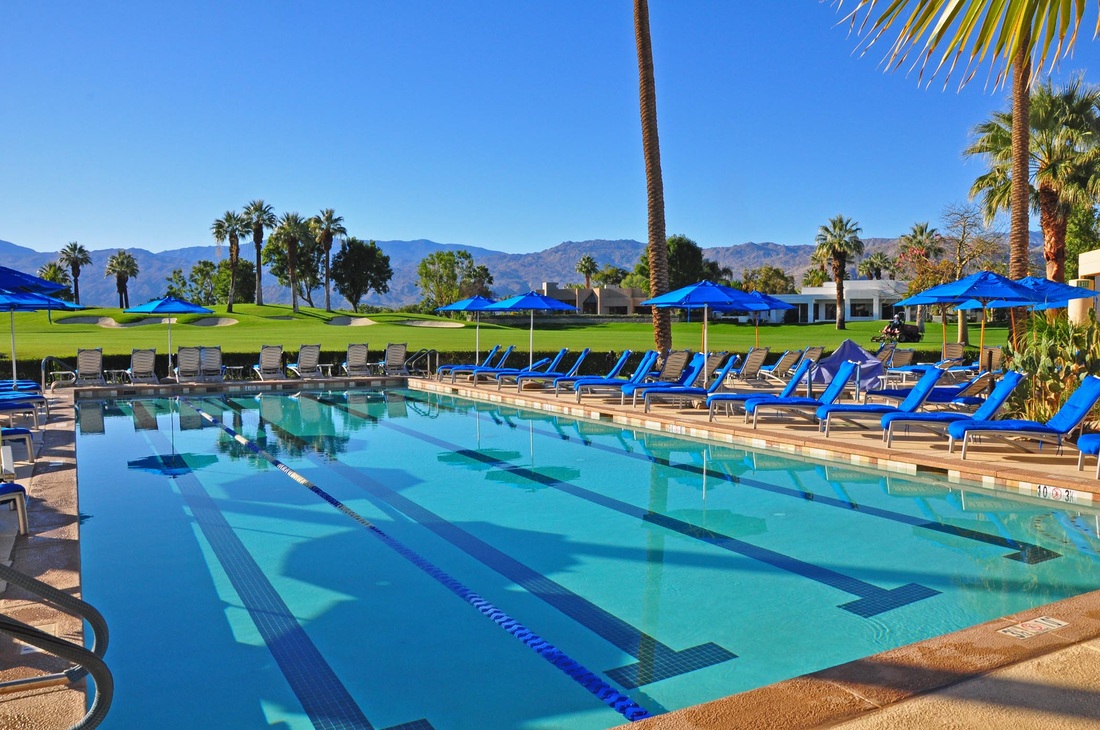 The Spa at Desert Springs offers wonderful massages, and has its own sunlit pool, its own café, steam rooms and saunas, a beauty salon, and an adjacent fully equipped gym, actually filled with health-conscious travelers.

A long chain of retail outlets with resort and gift wares stretches along the Colonnade of Shops, and even a contractor hawk trainer can be seen on the roof giving some practice exercises to his winged predator in-between guest-ordered lectures and demos. 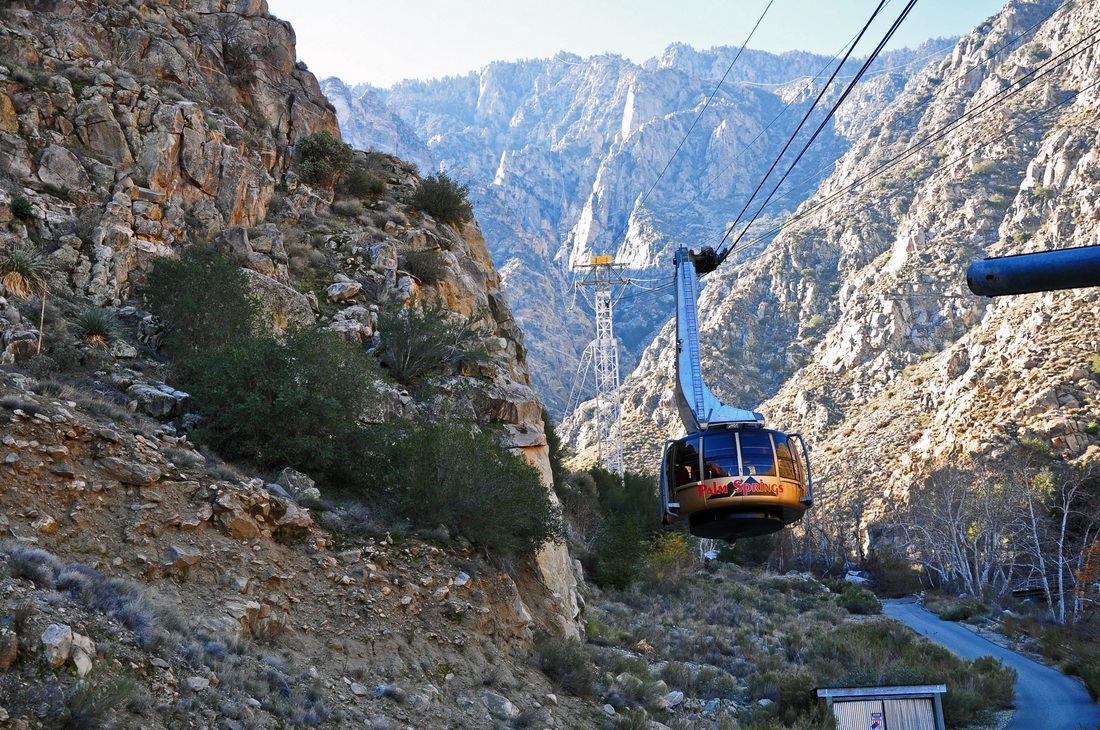 No trip to the area is complete without a breathtaking ten-minute ride up the mountains on the world’s largest rotating tramcar to the Mt. San Jacinto State Park. The two Swiss-built glassed cabins carry 80 passengers at a time up Chino Canyon from the 2,643-foot Valley Station to the 8,516-foot Mountain Station, passing as many climatic zones along the way as are found on a long Pacific shore stretch from Mexico to Canada.

At the top, where the temperature drops 20-40 degrees even in the middle of blazing-hot summer, the Mountain Station has Long Valley Deck surrounded by pines, covered with fresh snow in wintertime; Desert View Terrace with views of rugged mountains and a forest of windmills on the valley floor; an exhibition of flora and fauna indigenous to the area; a visitor center with park information and trail maps; a movie theater showing a documentary about the building of the Tramway in incredibly harsh conditions, and new tromp l’oeil murals by the local artist Keith Blum.
There are also Peaks Restaurant and Pines Café at the Mountain Station, now led by the new chef Kevin Land. Food stuffs are delivered to the top on the “first tram” early in the morning, before the crowds flock in, and water – in a special reservoir under the passenger cabin. Reportedly, some dishes have to be prepared in the valley and taken here, since the lower-oxygen mountainous conditions change the way food is being cooked and especially baked.

The little town of Cabazon can get really overpopulated with eager shopper battalions arriving by car and bus in great numbers, especially during the winter holiday season. Every- or almost every imaginable international brand has a factory outlet here, and tourists from as close as Los Angeles and as far as the Peoples’ Republic of China take full advantage of it. In the frenzy of gift shopping at the lit with myriads of Christmas lights East Village and West Village with a combined collection of 180 designer and name brand stores, the shoppers make a quick stop at Blaze Pizza, where the new speedy method of combining thin crust with a choice of sauce and toppings reduces lunch time to mere minutes. 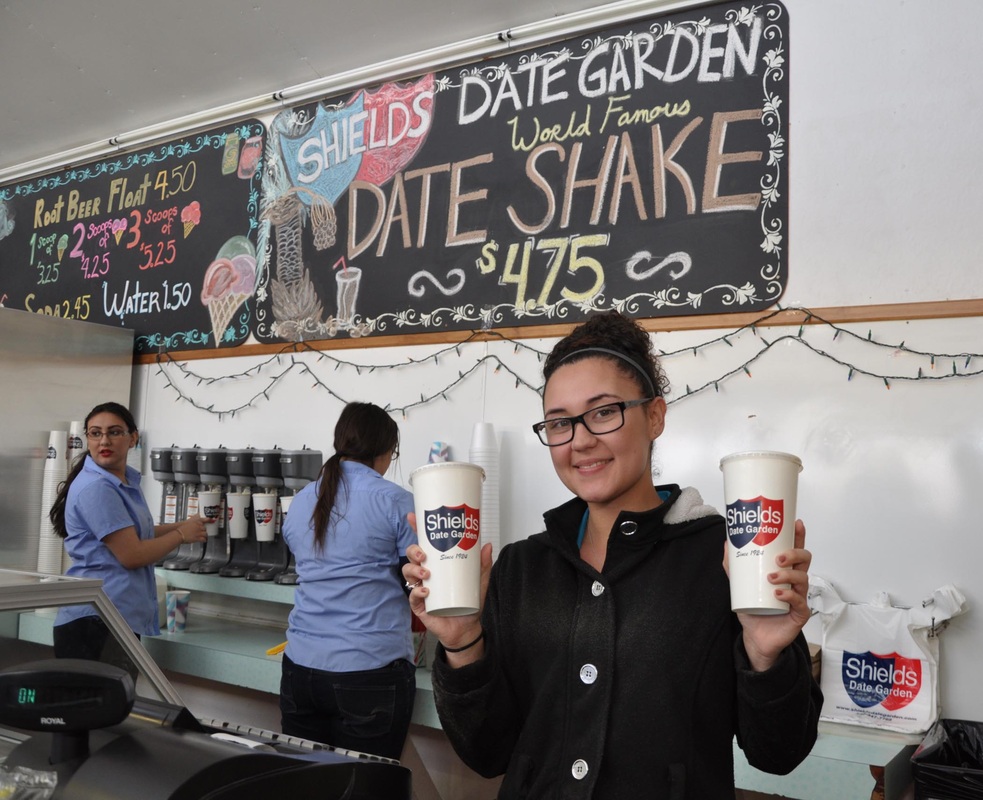 This unique “all about dates” farm and shop in the town of Indio features an incredible amount of date samples, recipes, and packaged varieties, plus a 1950s film “Romance and Sex Life of a Date.” Founded in 1924 by a husband and wife team of a mechanical engineer and a teacher from back East, Shields Date Garden is still producing those sweet hard-to-grow fruits, and is famous for date shakes, date ice cream, and fragrant citrus. Mr. Shields was the inventor of date sugar and the date crystal. Date sugar adds flavor to recipes and date crystals are a dry blend of dates used in cooking, on cold cereals and in date milkshakes. The Coachella Valley produces 90% of the dates in North America. 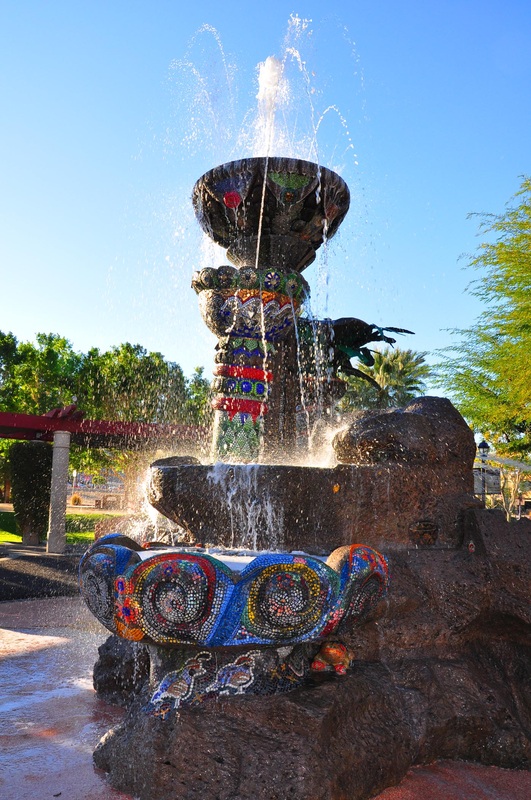 In the Center of Coachella Valley, the tiny, neat and trip Cathedral City has a remarkable Town Square with an elaborately sculpted and adorned with glass mosaic pieces Fountain of Life, symbolically depicting blooming palm trees surrounded by desert animals. Right next to it, there is Mary Pickford Theater – home to a small museum displaying personal belonging, some costumes, and two documentaries of “the girl with the golden curls” considered the most famous and beloved woman in the world in the silent film era. Equal in her international fame to Charlie Chaplin, the hard-working comedienne starred in 50-80 moving pictures a year, until the talkies which she contemptuously compared to lipstick on Venus de Milo ultimately ended her brilliant career. 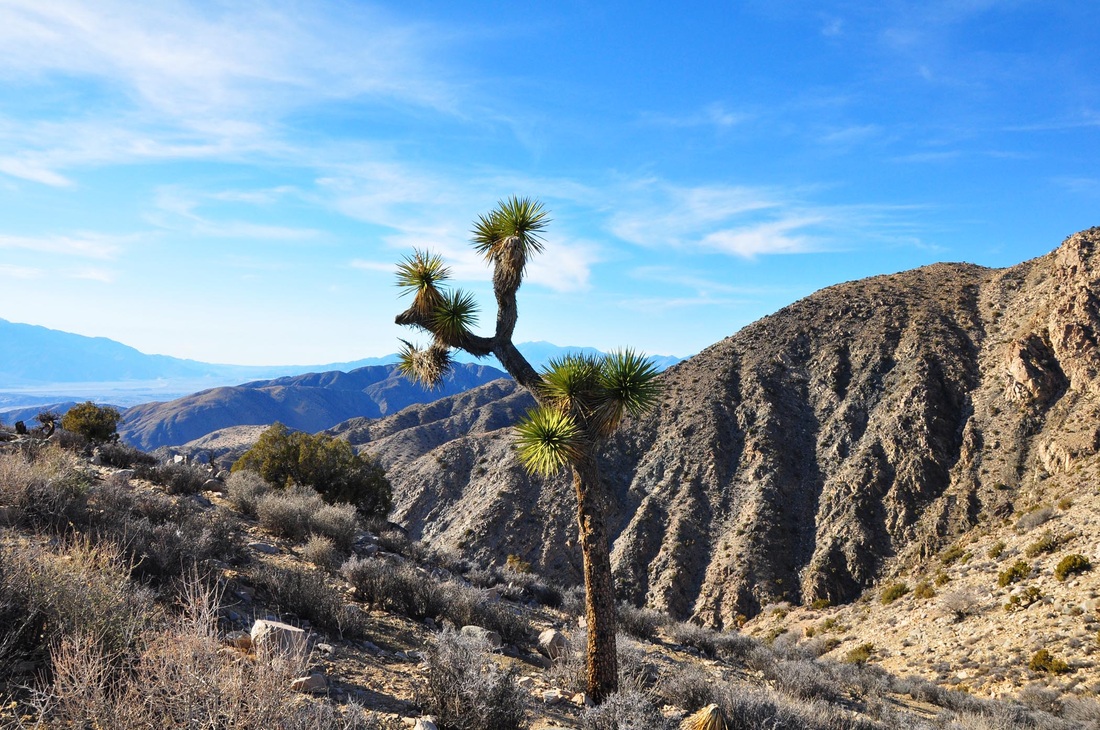 The true treasure of the California, Joshua Tree National Park lies in the overlap between the Colorado and Mojave deserts and stretches over 794 000 acres. The eastern half of the park is dominated by cholla cactus, palo verde, and ocotillo, while the western half contains forests of whimsically twisted Joshua tree amid giant smooth boulder stacks – the result of prehistoric volcanic activity in the area. 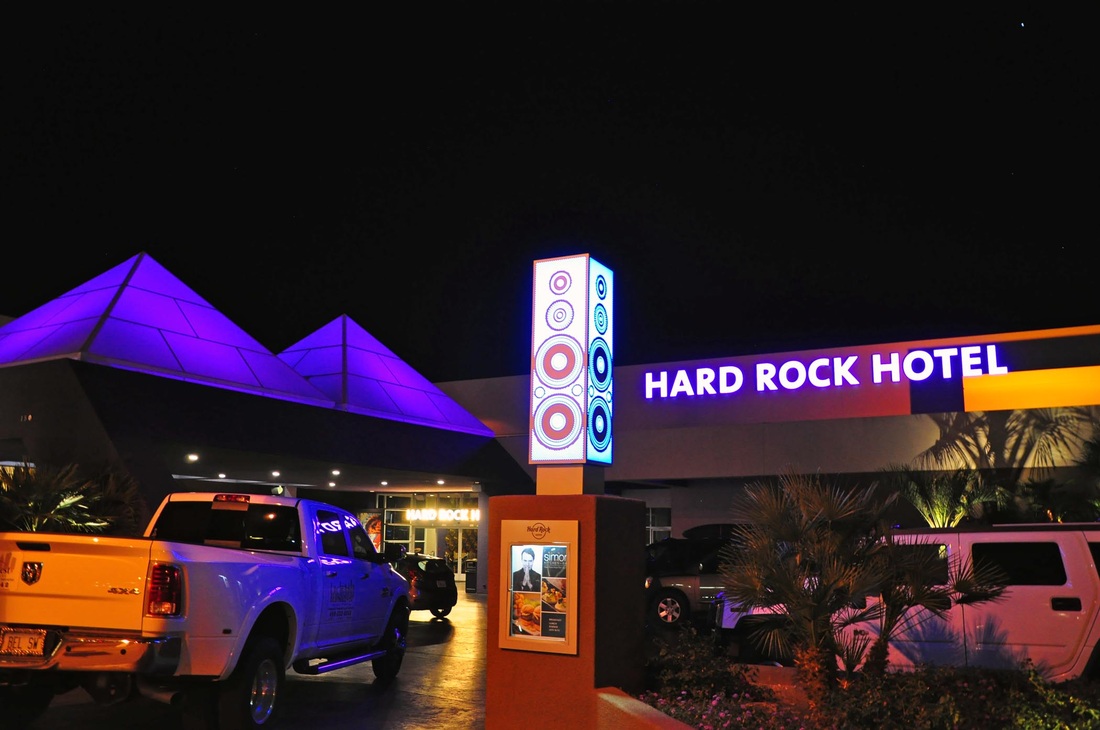 One of the newest hotels in the city center, Hard Rock is filled with rock musicians’ instruments, stage costumes, amplifiers, and other paraphernalia, and features over-the-top décor in the designer lobby, pool area, and in every room, each marked by a dedicated album from a legendary group. 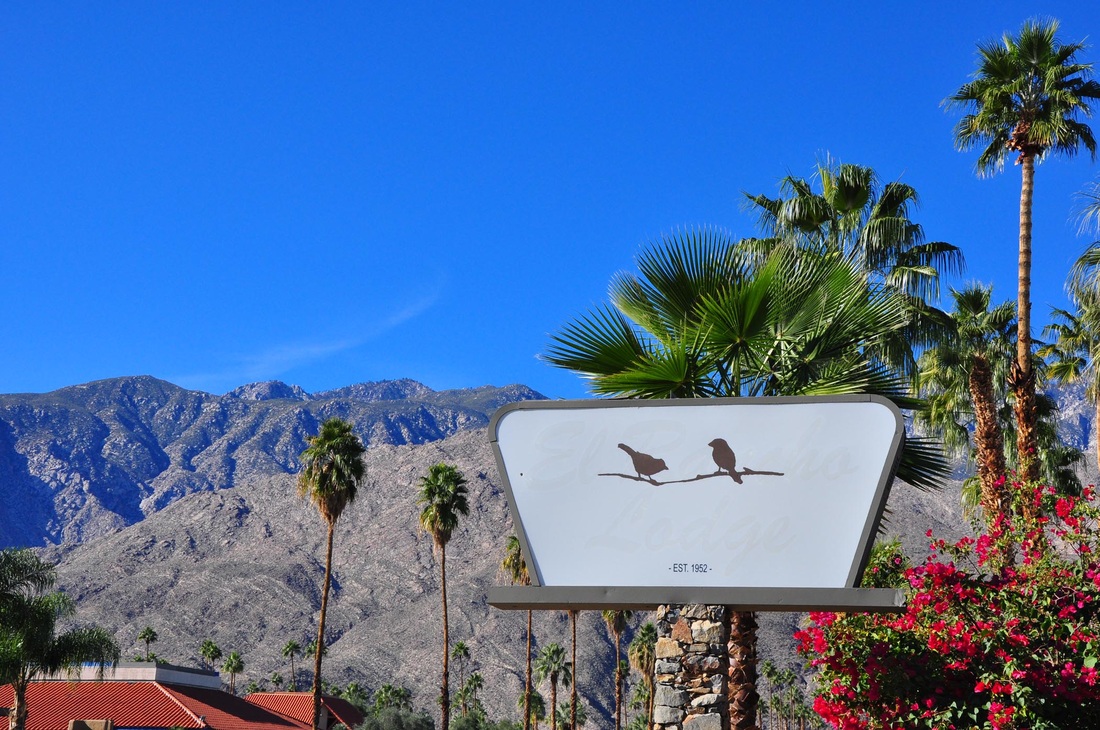 This brand new hotel, built to resemble a 1950s lodge, has only 20 rooms that surround a swimming pool with a hot tub and a fireplace. The rooms have cement walls with pebble trim, and a slate rock shower area with rough lead piping. Folding leather chairs and wooden tables constitute room furnishings, and the “papa bear” rustic beds are covered with Salvation Army-style thin blankets. There’s a cozy couch in front of a fireplace in the entrance area, and at the opposite end of the swimming pool that takes the center stage on the property – a breakfast nook and a bar with enough space for guests and their dogs in this pet-friendly establishment.