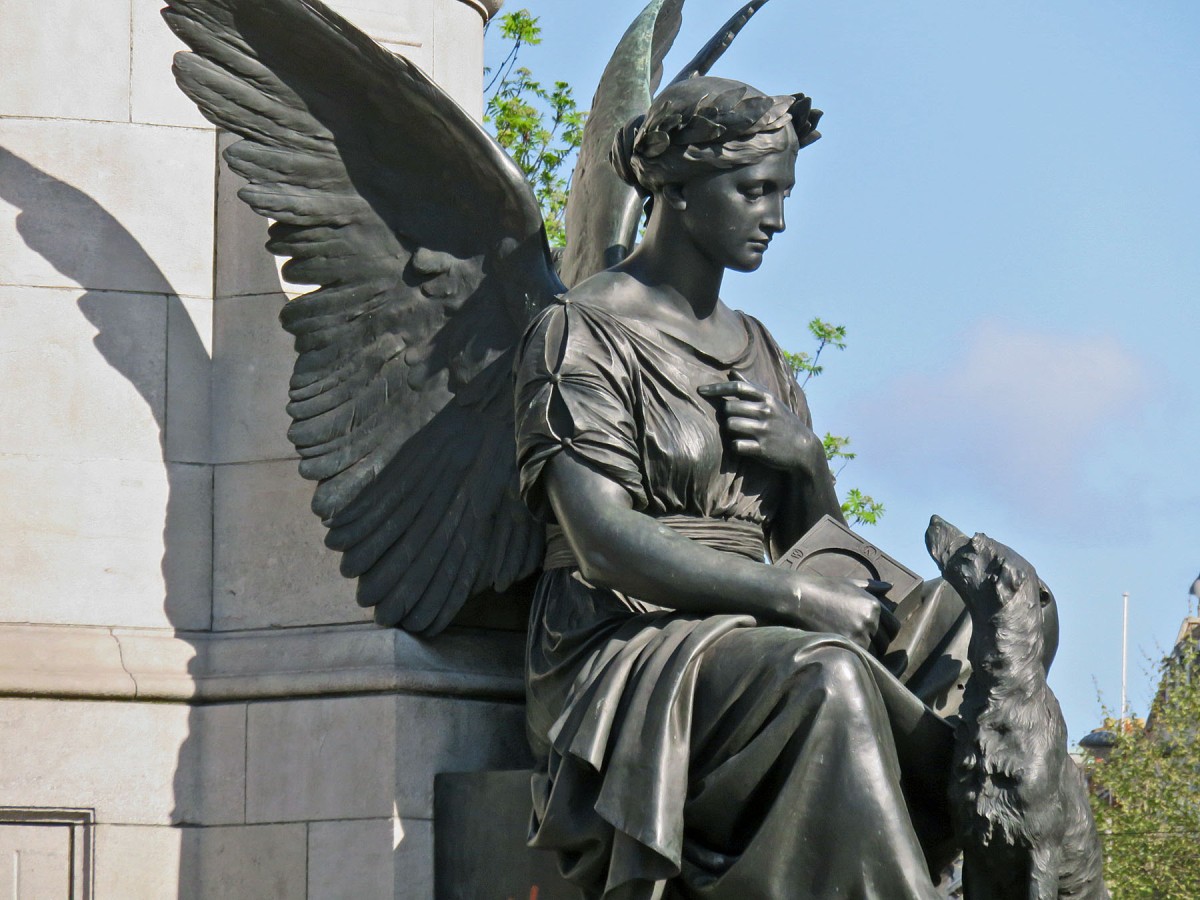 A poet of the Silver Age of Russian Poetry once referred to “the oceanic Ireland” as a country of profound lyrical influence, asking, “Why her foggy ripples are entwined into the clarity of my day? Why the sharp edges of her cliffs cut into my melancholy? How can I remember her black and scarlet dusks in sea foam and seagulls’ moans?”

The poet haven’t ever seen Ireland, but I have! All was true – the poignant oceanic beauty, the dizzyingly sharp cliffs, the black and scarlet dusks of the country’s history, laden with tragedy, and yet never yielding its glory, its quest for freedom, its poetic destiny.

In Dublin, the city of literary geniuses, first of all I visit the American College building on Merrion Square – a childhood home of Oscar Wilde, the king of paradoxes. Entering the United States with a course of lectures in 1882, he famously told the New York Customs officer, “I have nothing to declare, except my genius.”

I spend countless hours exploring the city on foot, walking along the banks of high-watered Liffey, and crossing its many bridges on a whim. At least three of them are named after Dublin’s writers of international fame – James Joyce, Samuel Beckett, and Sean O’Casey.

I cross O’Connell Bridge, built in 1880, and pay my respect to Daniel O’Connell (1775-1847) – the Liberator of Ireland, the national hero, and a strong advocate for human rights and non-violent political struggle. His monument in the city center bears the tragic traces of Ireland’s long road to independence that was finally achieved in 1922 as a result of Anglo-Irish and civil wars. Cast iron angels and allegories that surround the statue of O’Connell are pierced with bullets from the 1916 Easter Rising – the beginning of the Irish War of Independence. I stop at the National Museum of Ireland to see the text of the Proclamation of the Irish Republic, and – the many artifacts from the Emerald Isle’s rich history – from bog bodies to Celts gold, to Viking blacksmithing, to the weapons from Brian Boru’s 1014 Battle for Dublin.

Next door, at the National Library of Ireland I immerse myself in “The Life and Works of William Butler Yeats,” and then hurry to the Trinity College to marvel at the Book of Kells, and to inhale the intoxicating air of the Old Library, ever so slightly saturated with book dust, the air previously breathed by Jonathan Swift, Oliver Goldsmith, Bram Stoker, James Joyce, Oscar Wilde, and Samuel Beckett – all the former students of the college! 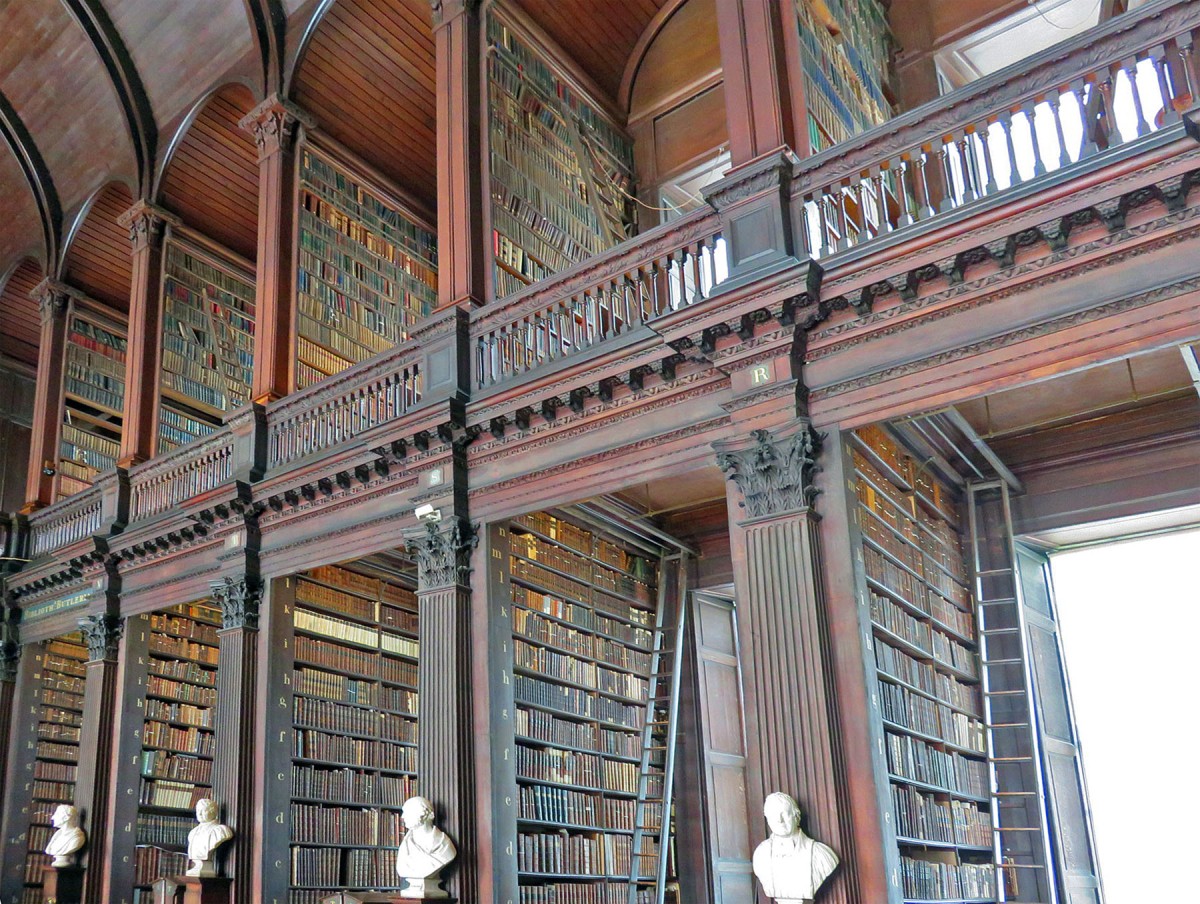 Then, traveling on Hop-On Hop-Off Dublin Bus, I visit Dublin Writers Museum, the Chester Beatty Library at the Dublin Castle with its overwhelming collection of manuscripts and early printed books, and the Saint Patrick’s Cathedral, where I observe the modest grave of the author of “Gulliver’s Travels,” who was also Dean of the Cathedral from 1713 to 1745.

For a sweet farewell to the city so remarkably reverent toward literature I embark on an evening Dublin Literary Pub Crawl – a very special attraction, never to be missed while in Dublin. An experienced tour guide, actor, literary expert, and entertainer Colm Quilligan and his actor assistant lead a group of guests on a wild excursion into historic pubs frequented by the world-famous Irish writers who liked to spend time in these select establishments with a pint or two of Guinness. The tour starts at The Duke Pub, and continues along the most important city landmarks (like Trinity College) and the most exciting city pubs for a couple of hours, ending at Davy Byrne’s adorned with Belle Époque murals, mirrors, and light fixtures. 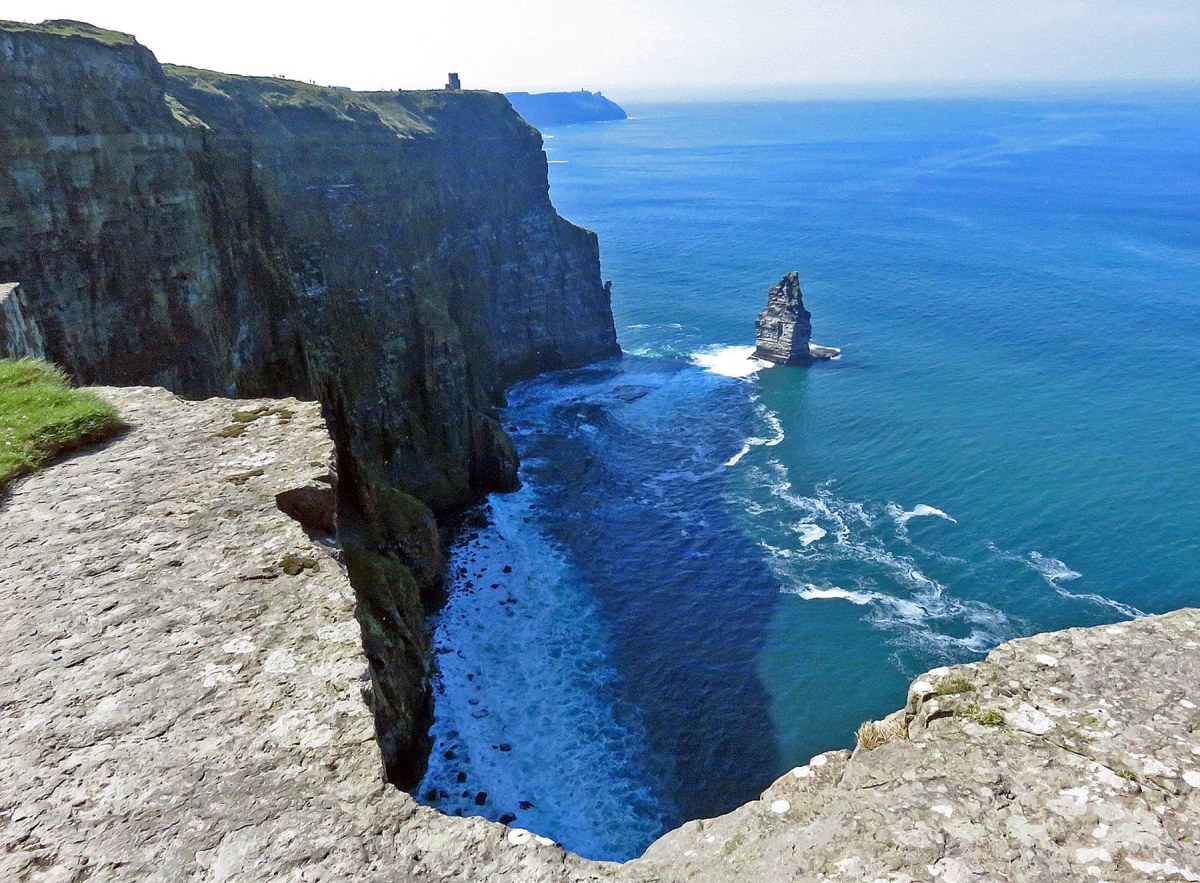 Despite the enormity of its historical, geological, and geographical events, Ireland is a small country. A road trip from Dublin to Doolin on the west coast of the island takes a little more than three hours – along the smooth newly updated motorways, past the emerald fields bordered by the “lace” stone walls. Sheep and cows – the sources of renowned Irish wool and dairy – graze all year round, since the temperatures never go below freezing, keeping the pastures green.

Doolin is a tiny fishing village on the northwest of County Clare – a traditional music capital of Ireland and a gateway to Aran Islands where Arctic and Alpine plants grow between the ancient rocks. The area of fertile grasslands is fed by underground rivers running over limestone plateaus. At the local tourist attraction, Doolin Cave, there is the longest free-hanging stalactite in the Northern Hemisphere – a stunning 24-feet underground wonder. The Cave owners are a family of farmers, and their fluffy goats pasture on the slanted roof of the Cave entrance, covered with green grass and yellow dandelions. 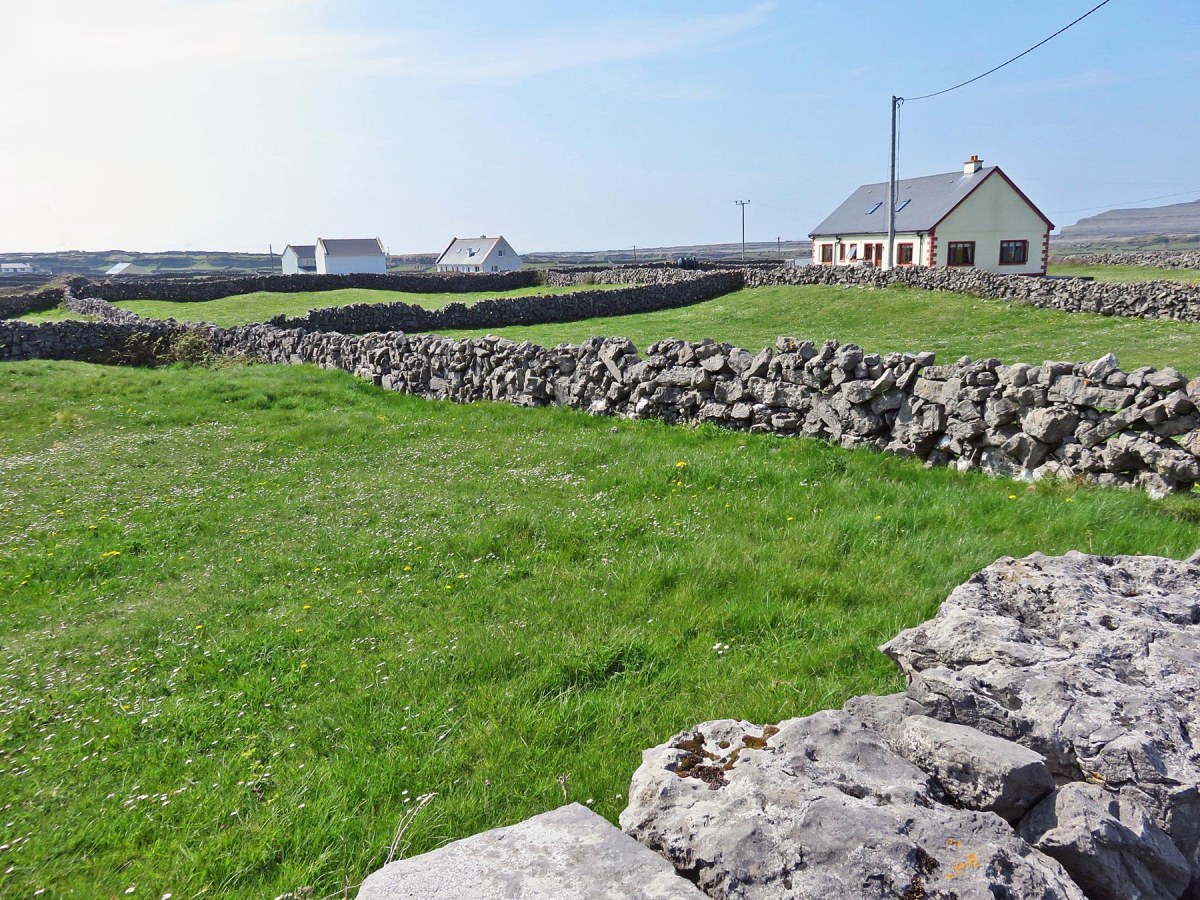 In the morning, our group of international travelers takes Doolin ferry to Inis Mór – the largest of the Aran Islands in Galway Bay. Martin McDonagh’s “The Lieutenant of Inishmore” that I’ve seen on stage in Berkeley, California, all of a sudden acquires a solid ground. Inis Mór (meaning “Big Island”) is a place of strong Irish culture, where people speak Irish as their first language, and where several national monuments are located, among them Dún Aengus – a Bronze Age hill fort surrounded by flowering gorse shrubbery on the highest point of a sheer cliff, and “The Seven Churches” – a site of 10th century masonry.

At the hospitable Tí Joe Watty’s we sit outside for lunch, eating delectable crab claws with butter and lemon. A big white cat is lounging nearby allowing strangers to pet him. “This is Odie, he’s very old,” says the hostess. “My children used to play with him, and they are now in their thirtieth.”

Oh well, I guess, anything is possible on Inis Mór.

Out of a hundred Geoparks in the world that include the Islands of Hong Kong, the volcano of Katla, Iceland, and the petrified forest of Lesvos, Greece, The Burren & Cliffs of Moher Geopark stands out as a place of inspirational beauty. A member of the Global Geoparks Network, supported by UNESCO, it’s managed by Clare County Council with dedication to responsible tourism, learning, and education.

The Cliffs of Moher, formed about 320 million years ago, is Ireland’s most visited natural attraction complete with easy hiking trails and stunning vistas, and teeming with wildlife. Peregrine falcons, puffins, kittiwakes, razorbills and fulmars nest on the ledges of the cliffs, while dolphins, seals, and even humpback whales can be spotted in the blue waters underneath. Our 10-kilometer walk atop the cliffs grants one breathtaking view after another – from green meadows covered with a rainbow of wild flowers to dramatic rock formations along the ocean edge. 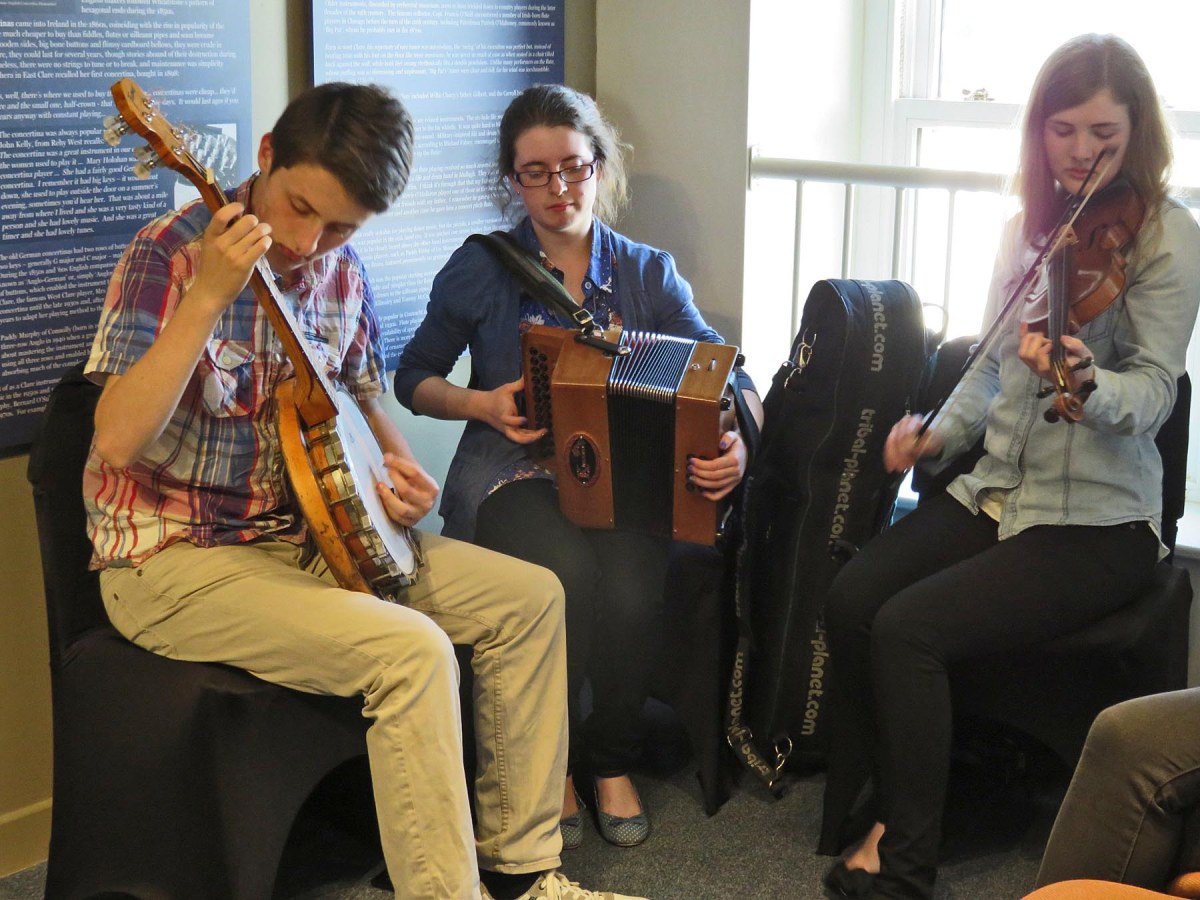 Traditional Irish Guinness at Gus O’Connor’s Pub, and later an impromptu concert of traditional Irish music, presented by the students of The Music Makers of West Clare in Miltown Malbay, fully restore our high spirits. 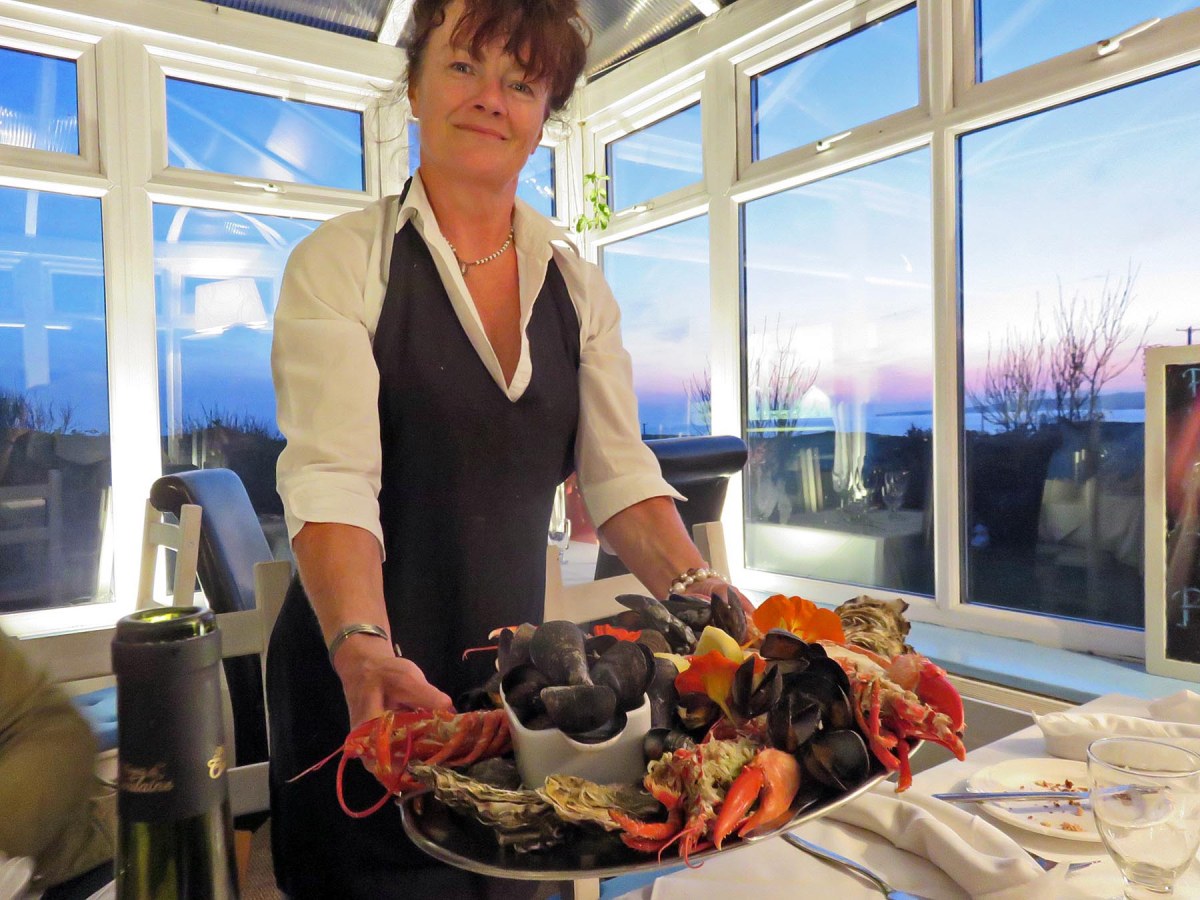 That night, we dine in Lahinch, at Barrtra Seafood Restaurant, where Theresa and Paul O’Brien serve platefuls of Atlantic lobsters, oysters, and mussels, and various preparations of freshly-caught fish. 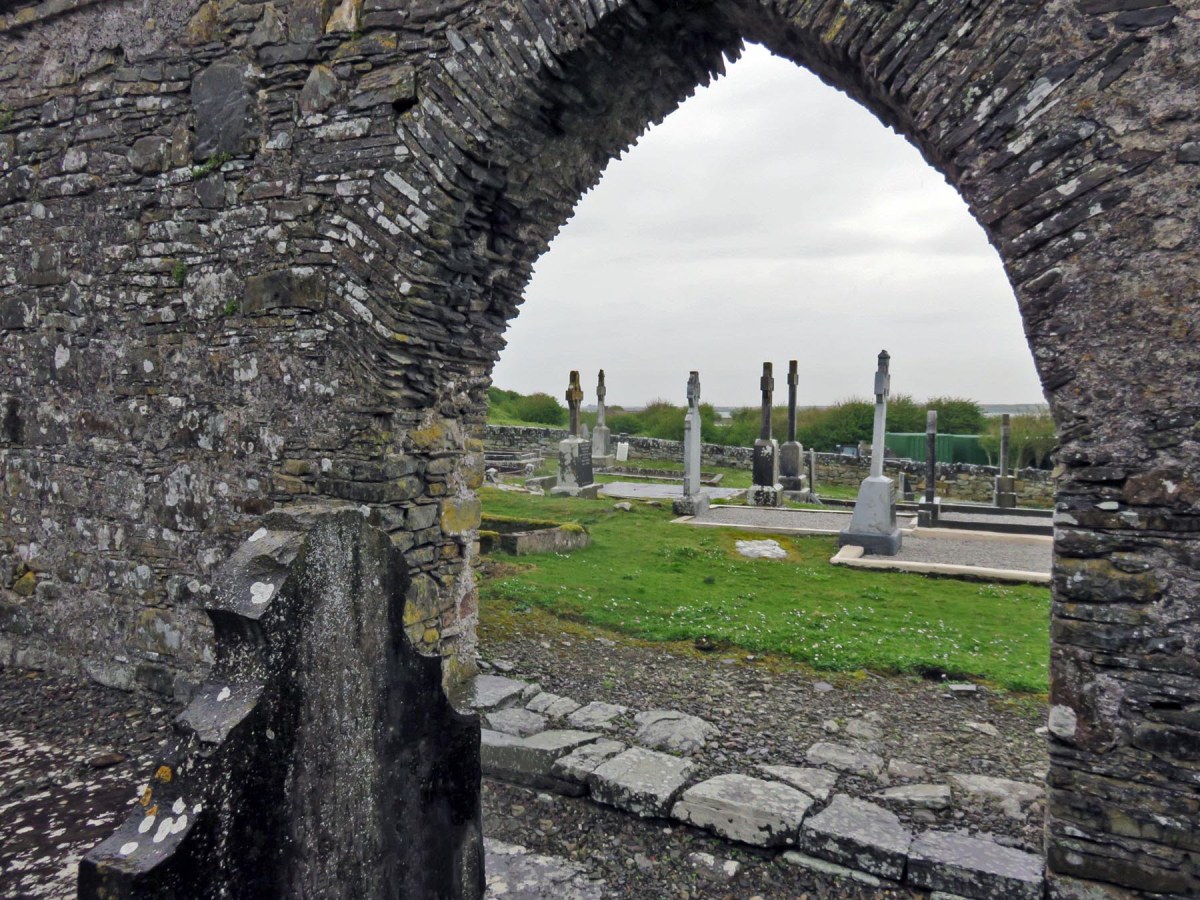 Next morning, in the drizzling rain we depart Kilrush for Scattery Island – a site of a monastic settlement founded in the early 6th century by the locally born St. Senan. The monastery was attacked by Vikings several times in the 9th – 10th century, but then recaptured by Brian Boru. The ruins of six stone churches, a 120-feet high round tower, and old cemeteries look especially picturesque and mysterious under the cloudy sky.

The Loop Head is another natural attraction of the area – a long and narrow peninsula with a lighthouse at its tip – the furthest point west on the Clare coastline. It’s a wild, wind-swept place with endless rock formations and naturally carved by wind and water stone “bridges.” The Loop Head Peninsula is also home to a thriving community of artists. Kilbaha Gallery & Crafts presents their wares, and has a little café operated by Liz Greeny and Ailish Connolly.

In Kilrush, we lunch at Crotty’s – a traditional Irish pub, founded by a prominent musician – concertina player Elizabeth Crotty and her husband, Miko. Back in 1914, the pub was divided into separate areas – the kitchen, the store, the tap rooms, and the “snug” – a hidden place for ladies to enjoy their drinks out of the public eye. The current owners, Kevin Clancy and Rebecca Brew serve hearty portions of pub fare with prevalence of fresh seafood.

Away from the coast, and off Wild Atlantic Way there is a city of Limerick, whose name became famous in time of medieval poetry contests. King John’s Castle, built in 1212, holds a vast exposition dedicated to the history of Ireland. St. Mary’s Cathedral dates from 1168, and Hunt Museum boasts a comprehensive collection of archeological finds and artifacts. Today, the city is vibrant and full of life, with the abundant Milk Market and a bustling Limerick Craft Hub, where more than 40 artisans work in textiles, ceramics, and jewelry under their motto, Handmade in Limerick.