Rebecca, an indentured servant, has only been at the plantation for two months, and already she has mastered the skills of milking, cooking, gardening and tending to the animals.

The Captain of the Dove, the ship that brought her from England, explains the intricacies of determining longitude and latitude in 1634.

Just as it was in 1634 when 142 settlers arrived under the leadership of Leonard Calvert. Based on the concept of religious tolerance — as well as profit — it was the first permanent settlement in Maryland. The emergence of St. Mary’s City — the first capital of MD until moved to Annapolis in 1695 — spawned a number of firsts. Here was built the first Catholic Chapel in the New World, with the Acts of Toleration created to promote harmony with the Protestants, in contrast to the persecution the Catholics received in England.

St. Mary’s legislature, a representative government — itself, a totally new concept — fostered the principle of Separation of Church and State. With the church at one end of the city, and the state house at the other, the geographically separate buildings were themselves a metaphor for the concept. The seeds of democracy were laid in St. 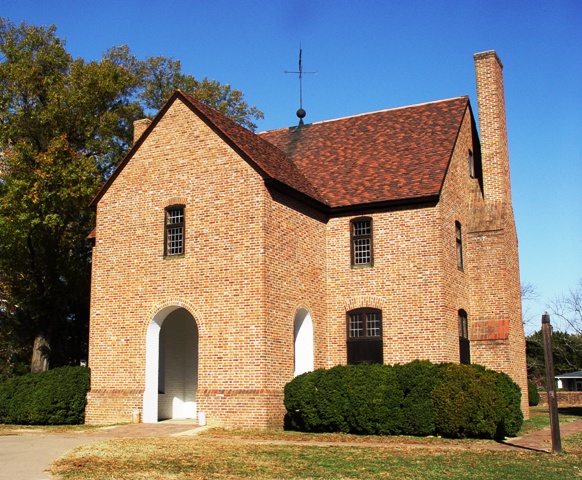 Just ask any colonist. Dressed in period attire and in character throughout, different settlers enthusiastically describe life in the colony — both good and bad — especially warming to their own particular circumstances. In easy conversations with visitors, they answer the wide variety of questions that come their way.

Male interpreters explain the way tools were made from stone and animal bones. Women are busy farming, weaving mats from river grass (real river grass), drying deer pelts (from real deer) for clothing. Nothing is Disneyfied. There are very few things that haven’t been authentically recreated — using the materials and the methods of the time.

Stop by Smith’s Ordinary — the town gathering place — for a drink, a game of draughts (English checkers) or Quoits, or perhaps to spend the night — on the floor, which defined “accommodations” in mid 17th century. 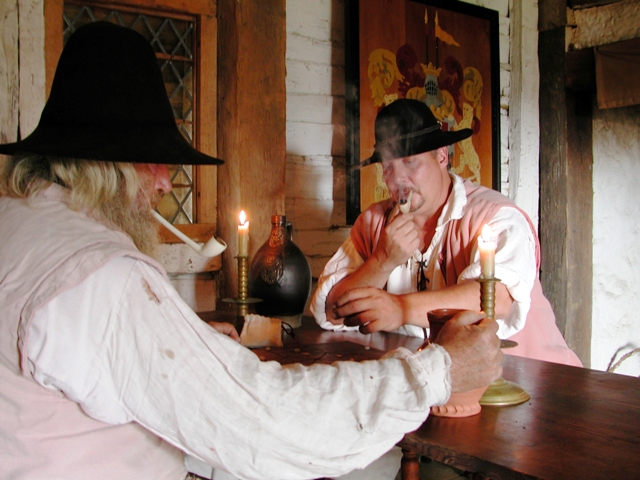 The Print House is the most recent addition to the ever-growing city. Locating the site of the structure involved a long, painstaking process of archaeological discoveries, intense research and lots of puzzle-piecing. The study of nearby glass fragments enabled exact duplication of windows. Counting and measuring the nails allowed for reconstruction of the original clapboard siding. Rare colonial skills, such as hand-hewing the beams, splitting the clapboard and forging the nails were employed to create the final inn. From excavation to the application of the final coat of whitewash, the new Print House virtually replicates the original.

Back to 1667. We encounter Sabella, a pretty young servant working off her indenture. She is crocheting a small herb-containing pouch that she will wear around her neck to promote good health. Good health is very important around these parts. Plantation owner Godiah Spray initially had doubts she’d survive the four seasons (many don’t), but now that she has been successfully “seasoned,” she eagerly looks forward to earning her freedom in five years.

Taking authenticity to new heights, not only do the materials actually reflect those that were used at the time, but so do the animals. The pigs, chickens and cows bear the same markings as the original animals — and bear little resemblance to their counterparts today. The cows are from a special herd with its own characteristic patterns; the pigs are stouter and snoutier.

But it’s the chickens that surprise me the most. They’re larger, some with hairy black and orange feathers sport fluffy, bushy balls on top of their heads; others, even bigger, are black with reddish-tinted fur and furry feet. The chickens I know don’t have furry feet! These animals are anachronisms — certainly not a part of today’s world. I must be in the 17th century!

Master Spray, while introducing his ‘guests” to his property, explains the workings of a 1660’s tobacco farm as he demonstrates how to split wood, till the soil and dry the “weed.”

He designates 10-year-old Chris Paul, from Berwyn Heights, Maryland, as his newest indentured servant, and instructs him in the proper raking of a small patch of land. Left to complete his chores, the group hears more about plantation life. Chris casts nervous glances at his parents, wondering if he really might be left behind, hoe in hand.

In conversation, Spray relates the benefits of smoking tobacco. To the colonists, not only is tobacco a cash-cow, but “good for whatever ails ‘ya.” When you grow 6000-10,000 pounds of tall dry stuff, you can afford to import fine dishes, glasses and furniture from Europe. Mrs. Spray is more than happy to show off her finely stocked home.

No doubt, she gets some of her finery at Cordea’s Hope. Mark Cordea would probably be an Enron executive today. He buys heavily anytime a ship from Europe is in town, stores his goods, and then sells them at extravagant prices during the times there are no other sources for his products. Everything from pottery and everyday necessities to rare crystal glassware, which he uses to toast his favorite — and no doubt, richest — customers. 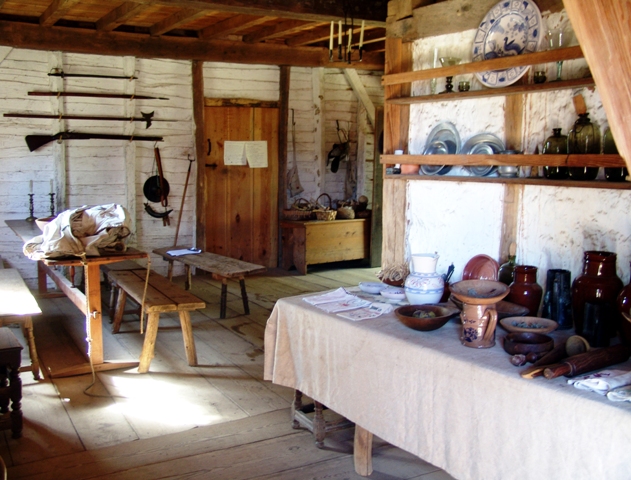 Aboard the Dove, there is always something happening — either the crew is loading cargo, testing the cannon, swabbing the decks or learning tricks of navigation, rope-tying or sailing. A visiting “sailor” is drafted to be a part of the crew during these demonstrations — to the delight of the rest of the crowd.

The Captain explains the intricacies of determining the ship’s latitude from the rudimentary instruments of 1634. What’s so impressive is how accurate they are. And they’re even older than the chickens… For more information about Historic St. Mary City, visit www.hsmcdigshistory.org.