There was a lot of talk about jumping into the seawater that was below freezing, also known as the Polar Plunge, and I wanted in. There was also talk that it may or may not be allowed. There are some dangers involved in doing the plunge. Americans don’t like to allow anyone to do anything remotely dangerous anymore, lest someone sue someone. So it was a big question most of the season as to whether it would go off or not. At one point I got wind of three of my friends doing an unsanctioned plunge and I was jealous. I was partly jealous because the two guys got to see the girl with her shirt off. It was something I figured was quite a sight by the look of her, but one I got to see anyway when she flashed me one night in the bar.   But the main reason I was bummed that I missed it was because I wanted to do the plunge and there might never be an official one.

Off-base excursions were prized possessions and we all tried to get them. But there was the official way to get them, which was to sign up through the Recreation Department, space permitting. Or there was the unofficial way, which was talking friends that had off base access (usually scientists) into taking you along. We as janitors were told not to encourage or accept these offers of unsanctioned trips off base. As I told you it created some controversy. We didn’t all listen to the rules and I found out about another friend who got a cool excursion off base that included a chance to polar plunge. I was so jealous, as the time to go home was nearing and I had not yet jumped in sub-freezing water. Crazy that I was jealous, I know, but you only live once and I knew the plunge would make a good story. I regularly teased my friend that she had not done a “real” polar plunge because she was wearing clothes when she did it, and that a real one should be naked. I think I just teased because I was jealous and I wanted my turn. Finally it came.

One day we got called to line handle, my voluntary service to catch the lines for the incoming ships, which I will go into later. It was not an ideal day to do so because it was a Sunday, our day off. For some reason though, after we got down to the dock, there was to be a delay and we weren’t needed until a few hours later in the afternoon. That’s when I got the word that they were doing the polar plunge over at Scott Base. Being Sunday, the shuttle service was sporadic to non-existent and I didn’t have much time to spare. I was supposed to be back on the dock in a few hours for my line handling duties but I wasn’t going to miss this opportunity. So I set out on foot to cover the three kilometers to Scott Base. I didn’t even make it a few hundred meters out of the base before a truck came by and I hitched a ride to the plunge.

It was all set up when I got there. They had a large hole in the ice with a ladder sticking out. There was a   metal platform about 10 feet long, leading to the ladder. There were two Kiwi helpers waiting to assist the plungers.

There was also a hut set up for changing purposes and it was packed. I showed up around the same time that a bus load of NAV CHAPS had arrived, all “eager” to jump into the sub-freezing water as well. The base was full of NAV CHAPS (Navy Cargo Handling Personnel) this time of year, because they were there to help with the annual ship unloading. They weren’t going to miss their chance to brag to their friends what a stupid and brave thing they had done so they were all keen to do the plunge. 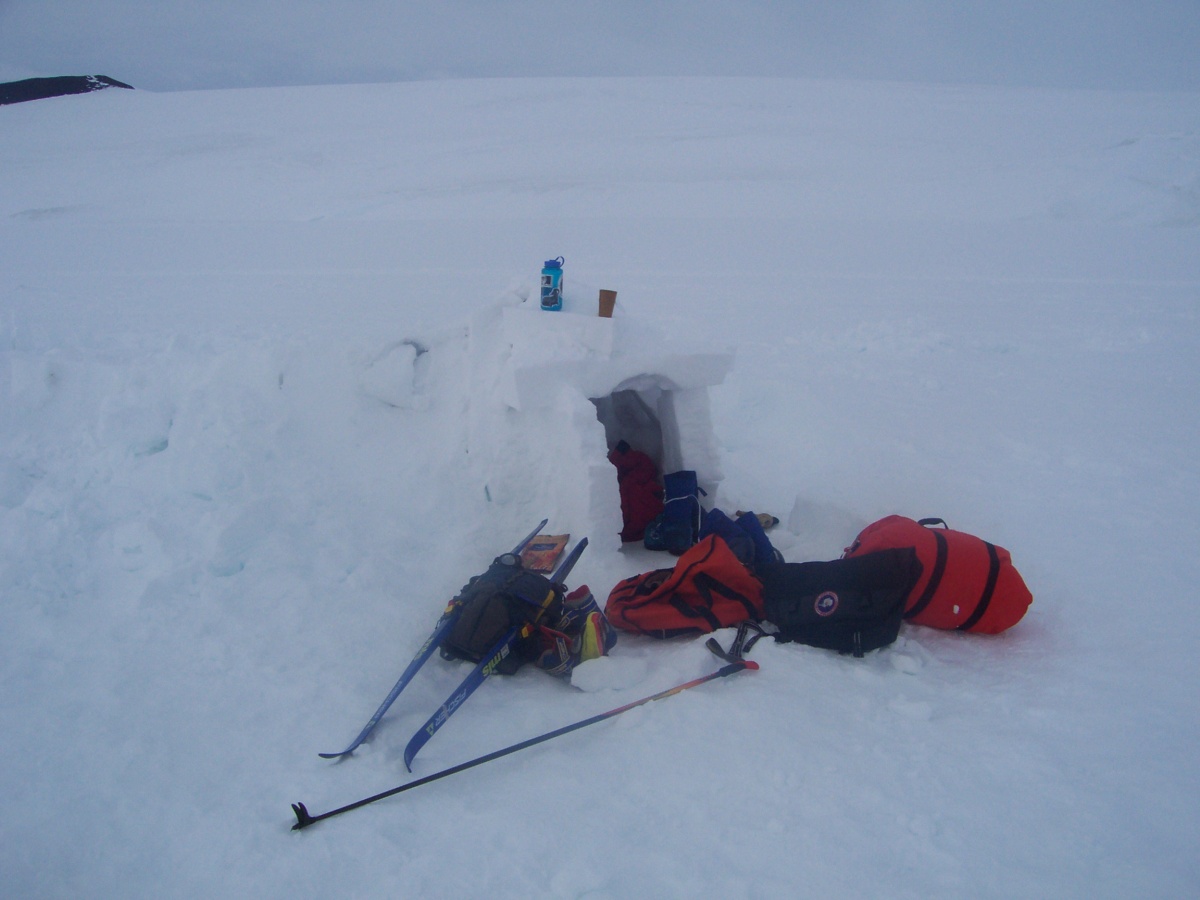 So in the hut packed full of young male and female NAV CHAPS, I proceeded to strip. The others around me were busy as well either getting dressed or getting undressed. There were cold, naked pink bits of skin sticking out here and there. We all had blankets to cover up with once we had taken our clothes off. We also were required to wear shoes. I almost had to plunge in my boots because I didn’t even think to bring other footwear. Luckily a guy I knew named Jim was there, he had just done it. He loaned me his way too small Teva’s and I waited in the hut until it was almost my turn.

Then I made my way out to the platform (in 10 F weather) wearing nothing but a blanket and tiny Teva’s.  I gave my camera to Jim so that he could document the event and the walked the plank. When I got to the end, I opened my blanket to the Kiwi helper so that he could help put on my harness. I knew there was no reason to linger so I dropped the blanket and plunged. Yes, it was cold!

Oddly though, when looking back, I don’t recall the cold really. Mostly what I remember thinking was “where the hell is the ladder?” I think I was actually in the water for all of about 5 seconds but that was enough. I wasn’t planning to do any laps and now I had my bragging rights. So I quickly climbed up the ladder, naked and cold, and they threw the blanket over me.

On my walk up to the hut, Jim informed me he hadn’t gotten a photo of it. He had me walking the plank but then my camera malfunctioned. I was bummed but there was no way in hell I was jumping back in that water. I had done it; that was good enough. I didn’t need photo evidence. Life still happens even if there is not a photo of it, which may be hard for some people to grasp these days. 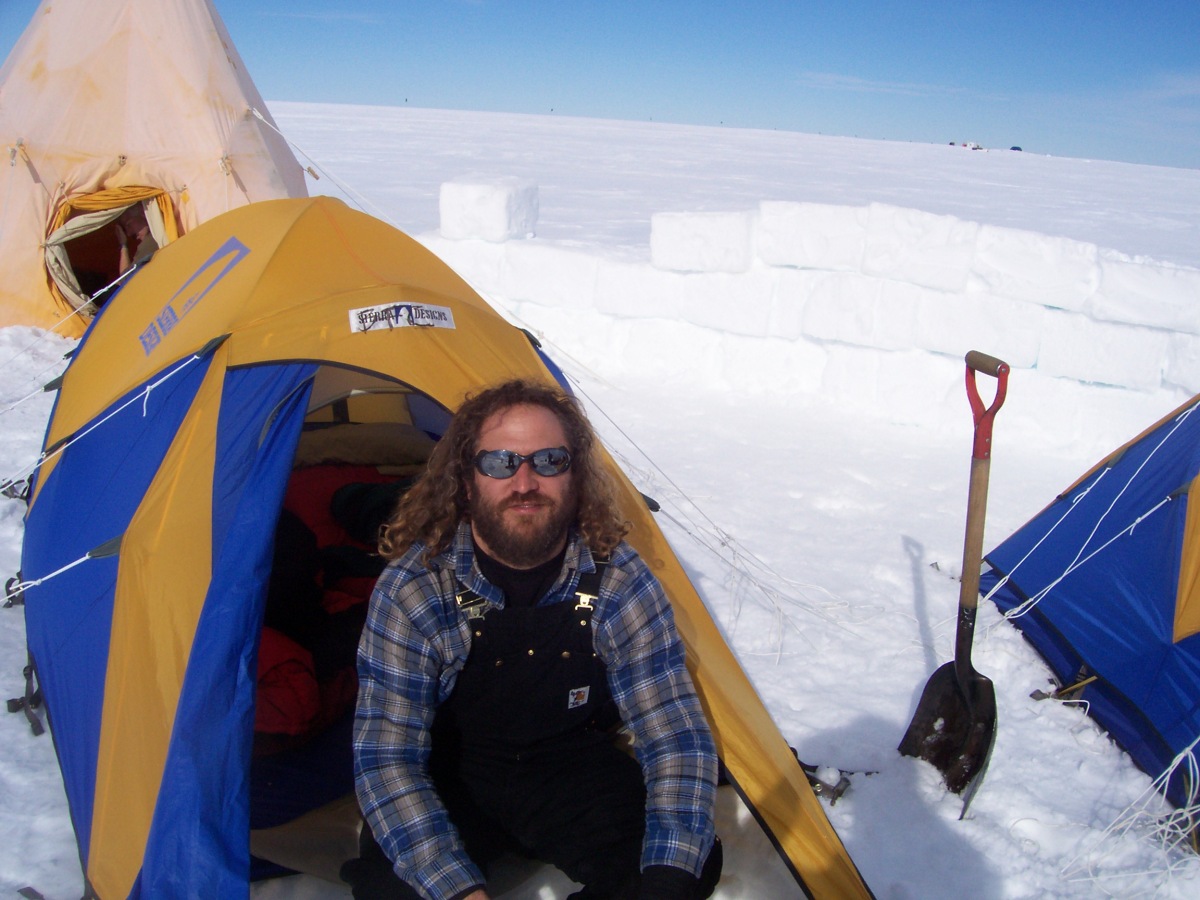 A few days later I bumped into one of the NAV CHAPS in the hall. He recognized me from that day and told me he had a video of the whole thing. He had recorded the whole group of them doing it and I was about in the middle. So I did get my hands on a copy of it and now I do have that photographic evidence. The funny thing is I was one of the few guys to do it naked. I didn’t realize it that day but after watching the video I realized only one other guy plunged in the buff. That didn’t include the NAV CHAP girls though, they were more daring. There were about five of them, and I think all went naked but one. She for some reason did it wearing a Roman Legionnaires outfit. I don’t know what the guys were worried about. They could always claim: “it’s not me, it’s the cold. It’s the shrinkage!!!”