The city of Oslo – clean, beautiful, and filled with light reflected off the blue waters of Oslo Fjord – exudes so much springy energy that it’s easy to associate it with a statue of a fierce tiger (by a contemporary Norwegian sculptor Elena Engelsen) casually walking across Jernbanetorget (“The Railway Square”) near the Oslo Central Station. In fact, Oslo was called Tigerstaden (“The Tiger City”) by the Nobel Laureate Bjørnstjerne Bjørnson (1832-1910) in one his poems…

Largely open to pedestrian traffic, and with a highly developed public transportation system, the capital of Norway holds many sightseeing treasures easily accessible with an Oslo Pass, launched in 1984 as one of the very first city cards in Europe, and issued by Visit Oslo.

A massive red-brick Oslo City Hall opened in 1950 is richly decorated with murals depicting the life and history of hard-working peaceful people proud of their Nordic heritage; and the legends and fairy tales of the gorgeous frigid land covered with dense forests, granite mountains, and pristine lakes. Free guided tours are offered at the City Hall throughout summer, including a rare Sunday tour of the clock tower with melodiously tolling bells.

A walking distance away, there’s The National Gallery with the country’s largest collection of paintings, drawings, and sculptures. Edvard Munch’s major works, “The Scream” and “Madonna” can be seen here among his other masterpieces, while the surrounding galleries present a wide variety of Norwegian artists from the early 19th through the end of the 20th century. 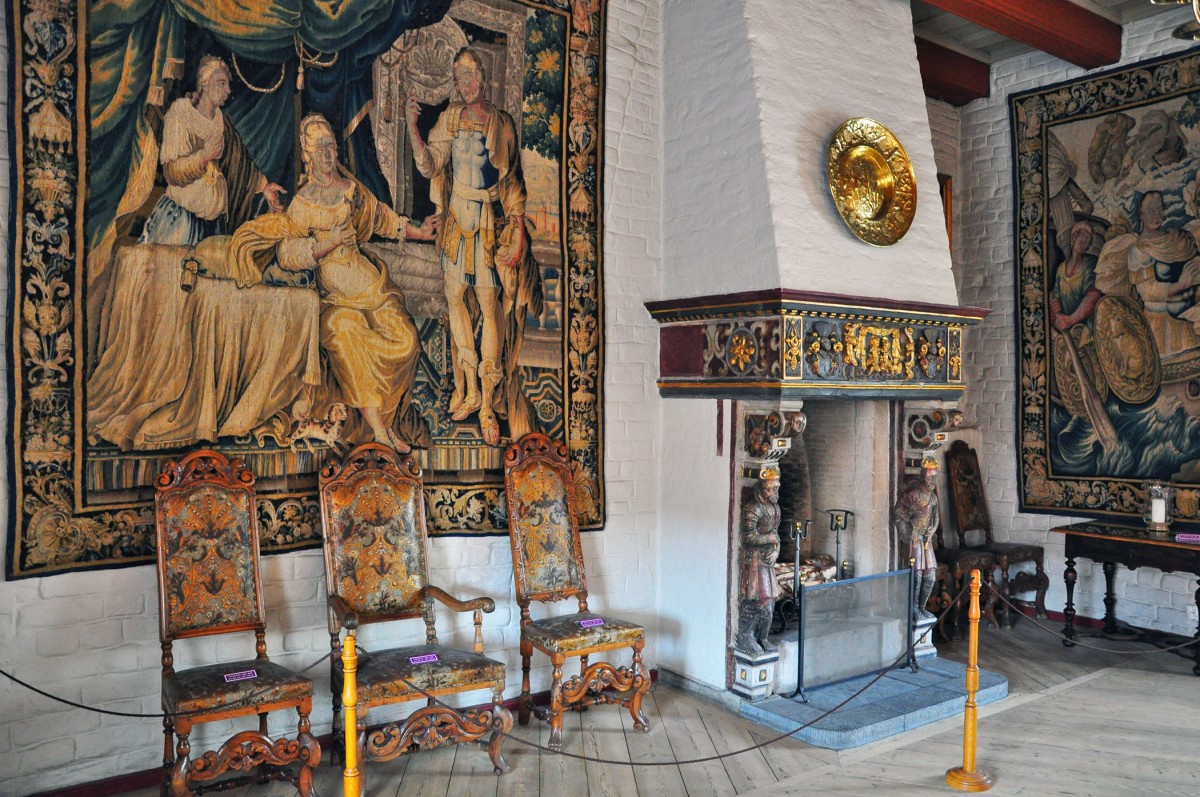 Also centrally located Akershus Castle provides a rare glimpse into the historical whereabouts of Norwegian royalty. Originally built as a medieval fortress circa 1300, during the reign of the Danish-Norwegian kind Christian IV in the first half of the 17th century, the castle was rebuilt in Renaissance style with ornate furnishings and intricate rugs and tapestries. There are also quite a few pieces of stunning public art installed throughout the park grounds around the castle.

A massive presentation of the entire body of work created by the sculptor Gustav Vigeland (1869-1943) can be seen at Vigeland Sculpture Park where 200 enormous granite, bronze, and wrought iron depictions of endlessly variable human subjects populate the world’s largest sculpture park with all the art pieces and architectural layout made by a single artist. The sculptures are grouped in five distinct units – The Main gate, the Bridge with the Children’s playground, the Fountain, the Monolith plateau and the Wheel of Life – all actively attended, especially on weekends, by the city dwellers and the visitors alike.

During our short stay in Oslo at the end of summer, my husband and I found ourselves in close proximity to all these attractions while staying at the Thon Hotel Oslo Panorama with excellent service and panoramic views of the city and the fjord below. 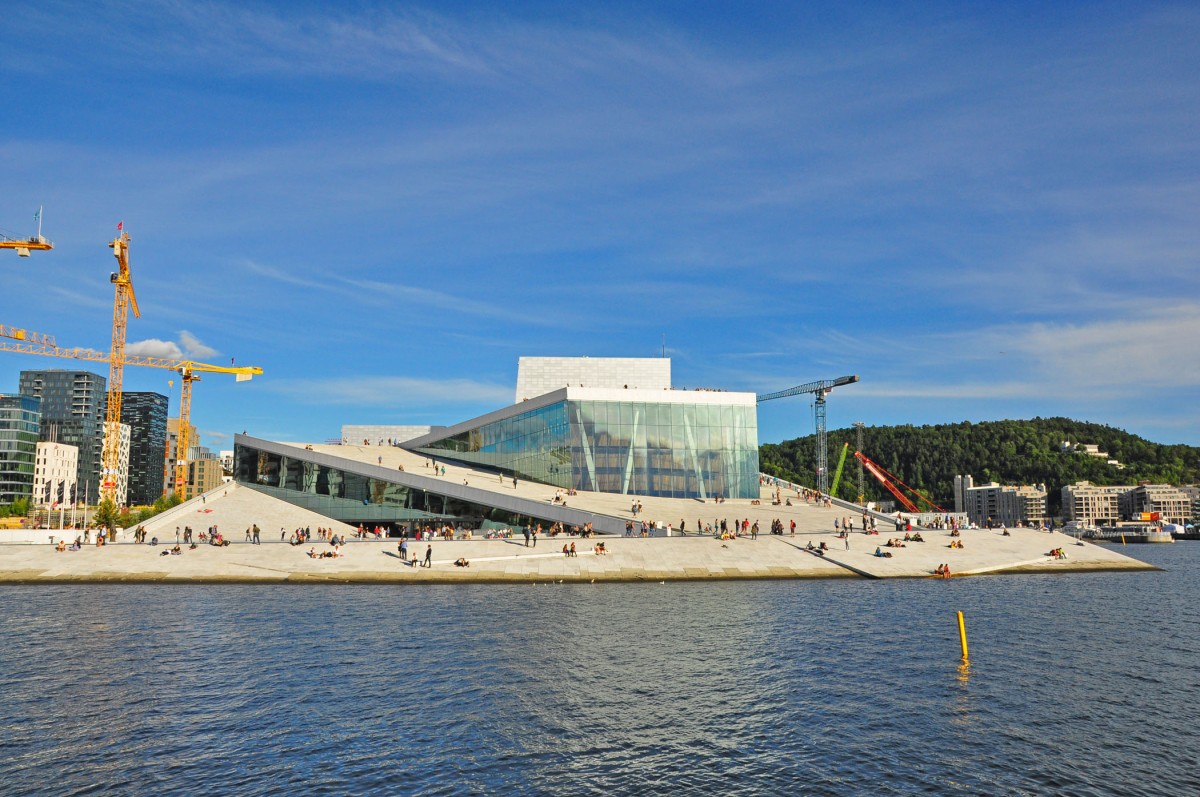 On a sunny day, the best views of the city can be enjoyed on board the Norway Yacht Charter Båtservice Sightseeing Oslo Fjord that sails past the most important landmarks, including the sprawling glacier-like white building of the Norwegian Opera & Ballet, designed by Snøhetta architecture and design firm, as if floating into the fjord.

We were lucky to attend the season opening at the Opera showing Gluck’s “Orpheus and Eurydice” with bold contemporary staging and costuming, highly talented cast and fabulous orchestra. The angled building, covered with white Carrara marble and white granite, boasts a walkable roof, a white aluminum stage tower, and floor-to-ceiling lobby windows overlooking the water.

The interiors are paneled with warm oak, and in the main auditorium an oval chandelier is comprised of 5,800 handmade crystals. There’s no supertitles screen above the stage, but instead the seats are equipped with monitors for the electronic libretto system in Norwegian and English in addition to an opera’s original language.

Since the shows start as early as 6 p.m. in Oslo, we had a chance to walk on the building’s outdoor terraces after the performance, and revel in sunset views over the fjord, enhanced by the ever-present clouds.

This closeness of water everywhere in the city center has a wonderfully refreshing and calming effect, especially pronounced at the famously artsy and extremely comfortable hotel, The Thief. Contemporary art pieces abound throughout the property, rivaled only by the picturesque views of the city architecture and nearby marina from every window and a rooftop bar. 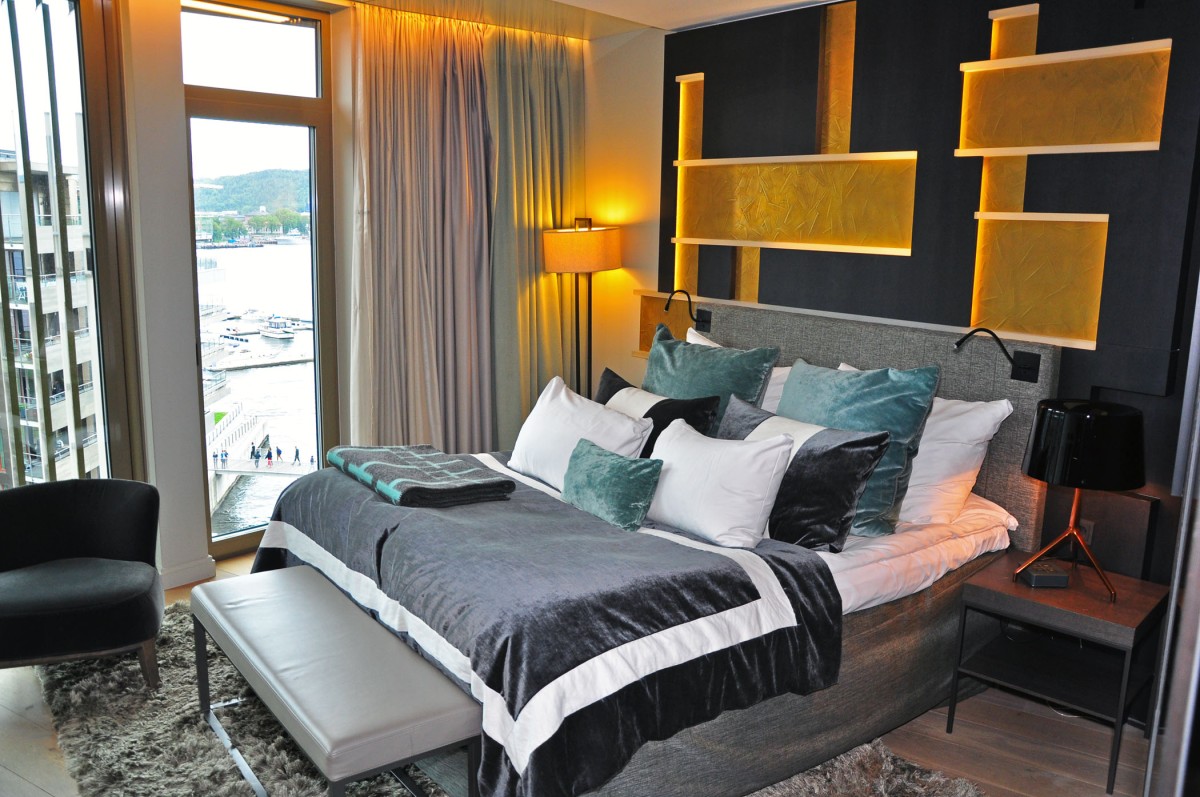 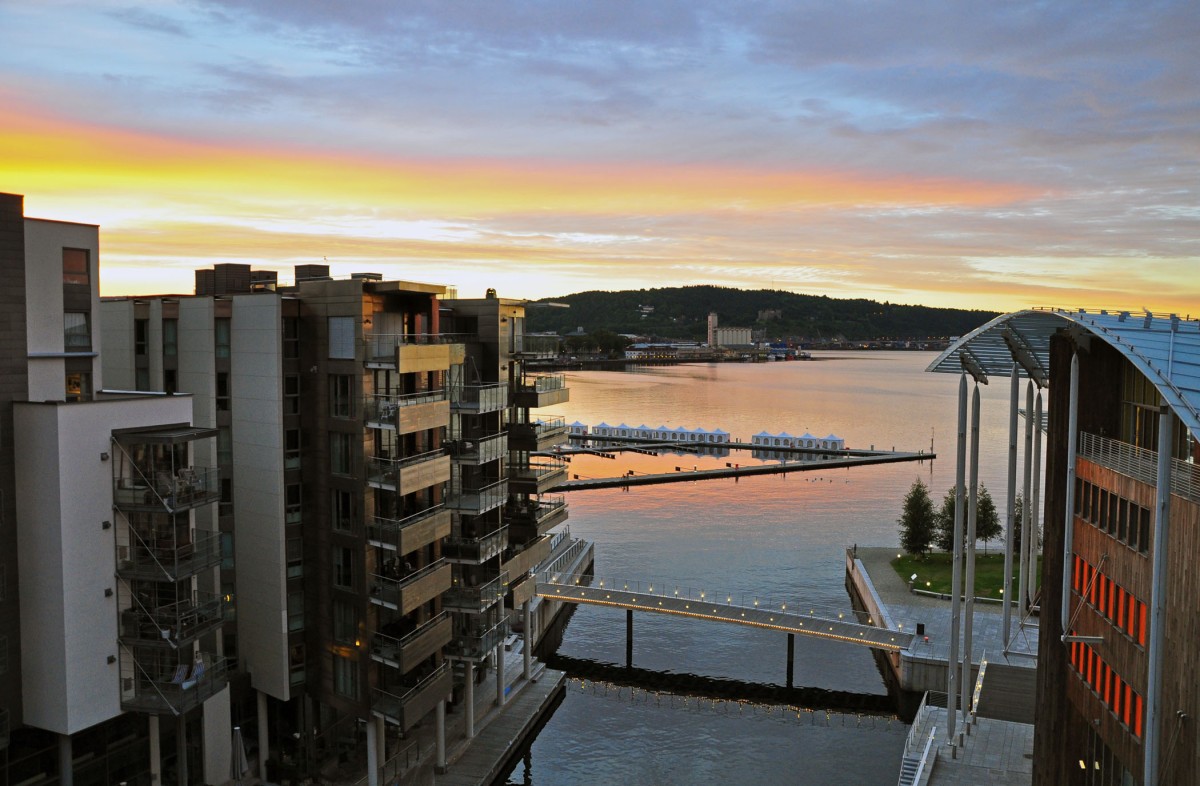 From our room’s hip triangular balcony along a glass wall, I could watch mooring and departure of numerous small boats, and an occasional couple of white swans nonchalantly gliding by. The room, equipped with modern furniture and a dreamy bed with plush pillows in sea foam, cloudy sky, and sand color scheme seemed especially appropriate in the close proximity to the wonders of Nordic nature.

The Thief Spa is an enchanting getaway with a full-size pool lined with thick candles, lit by multi-colored LED lights, and awashed in soft music for a slow relaxing swim. If it weren’t for a delicious dinner that was waiting for us at the Thief Foodbar I would’ve never stopped doing those lazy laps… 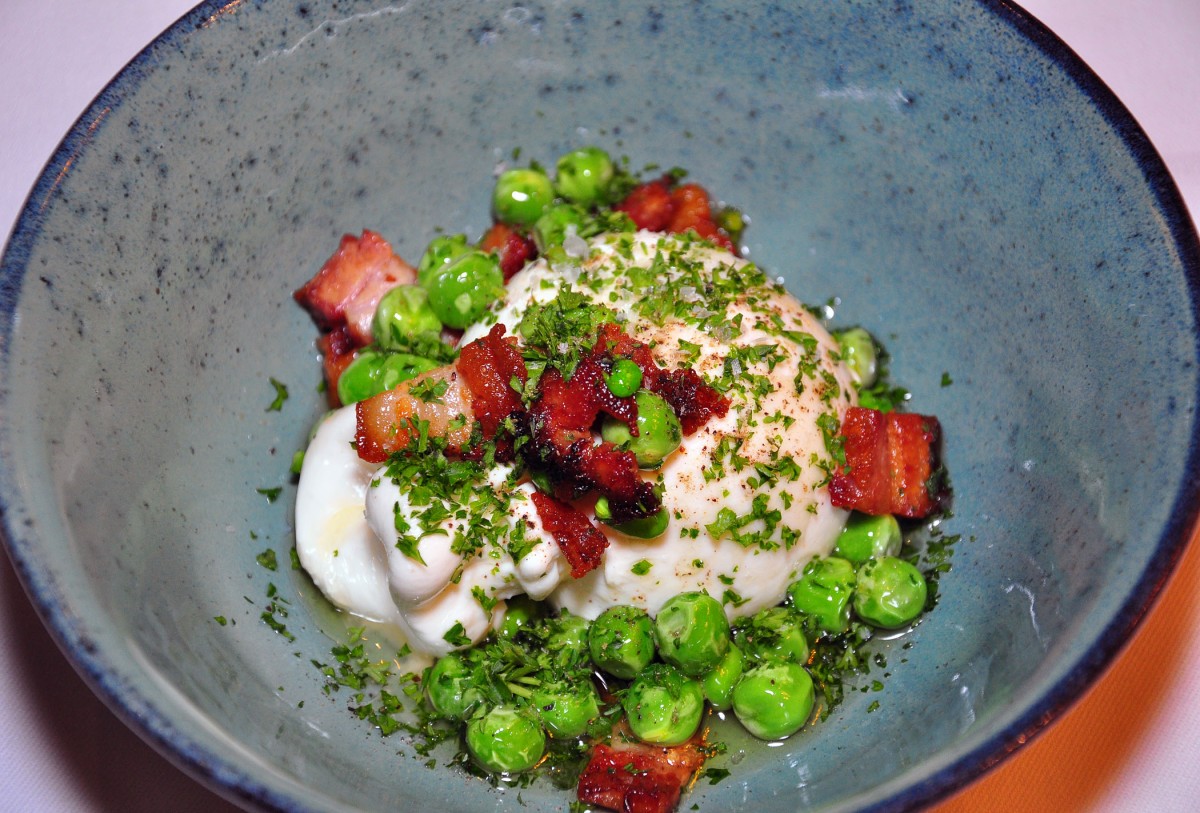 Contemporary Nordic cuisine is vibrant and exciting, and plays a big role on the Oslo culinary scene. One of the most interesting restaurants, Smalhans, is led by a creative chef Karl Torbjørn Andersen, known for his dynamic tasting menus that change every couple of weeks or so. 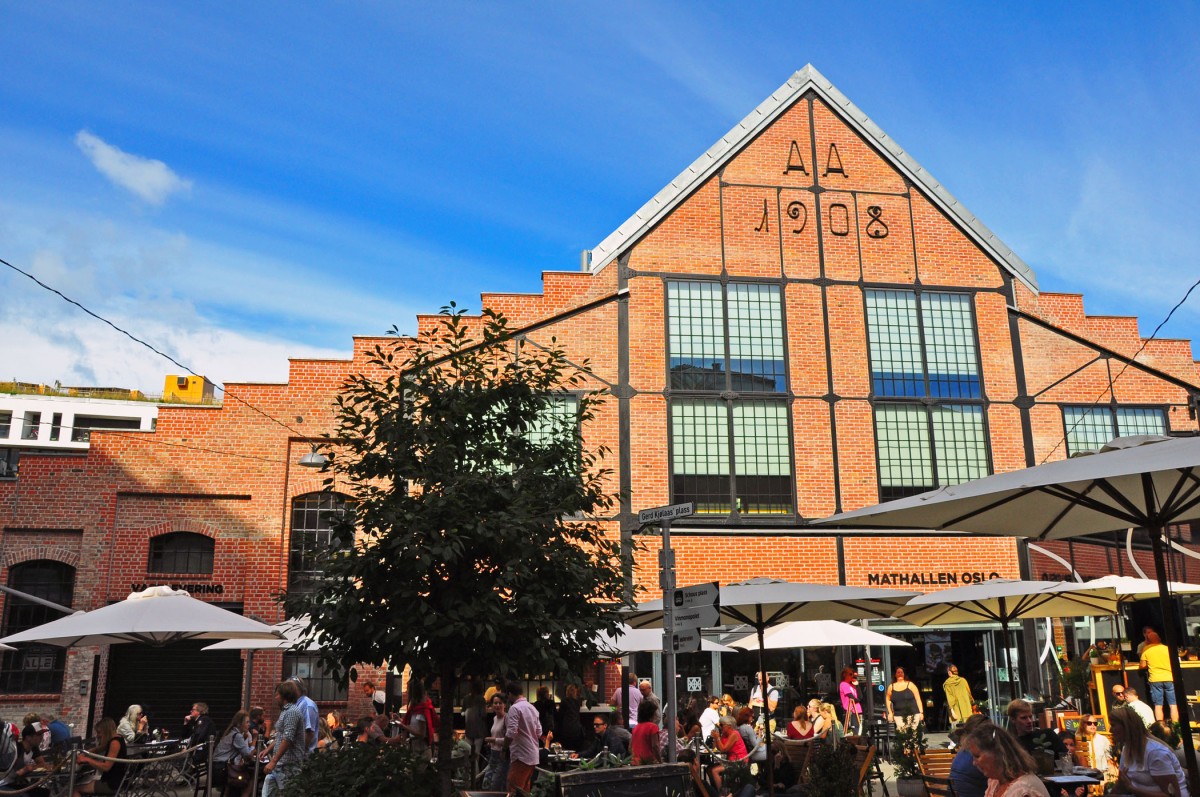 The company sees its mission in creating attractive urban environments while reducing energy consumption and facilitating sharing. As Aspelin Ramm proclaims, “Great cities depend on good buildings surrounded by multifunctional urban areas, and responsibility involves emphasizing both of these qualities. We all have a responsibility to make this happen through good city planning. Good architecture, the use of durable high-quality materials and respect for the environment and our surroundings are our hallmarks.” 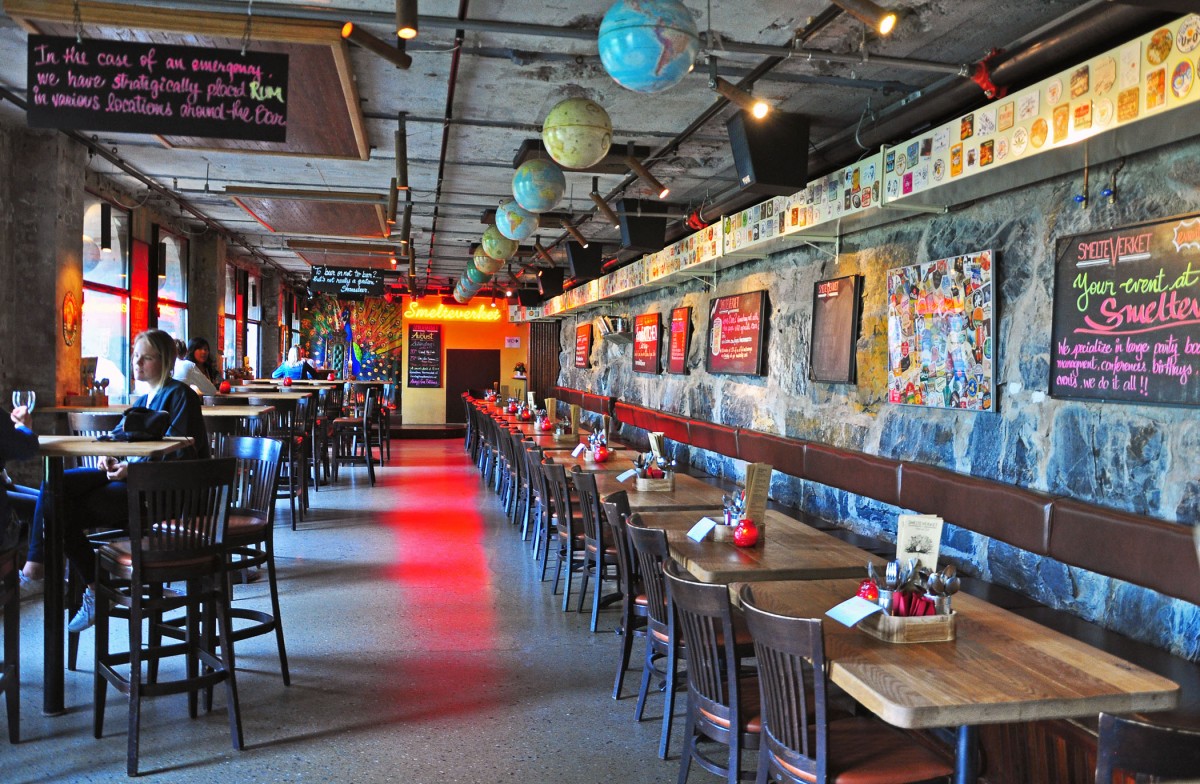 Mathallen Olso is located inside a historic 1908 building, and has some very special rooftop beehives designed by the Snøhetta architects. Shoppers like to take a break at communal tables with supremely delicious smoked salmon sandwiches on dark rye, cheeses, sausages, salads, and pastries from the Mathallen specialty shops – or drop in the remarkable “world’s longest bar” with equally long list of local beers and wines. 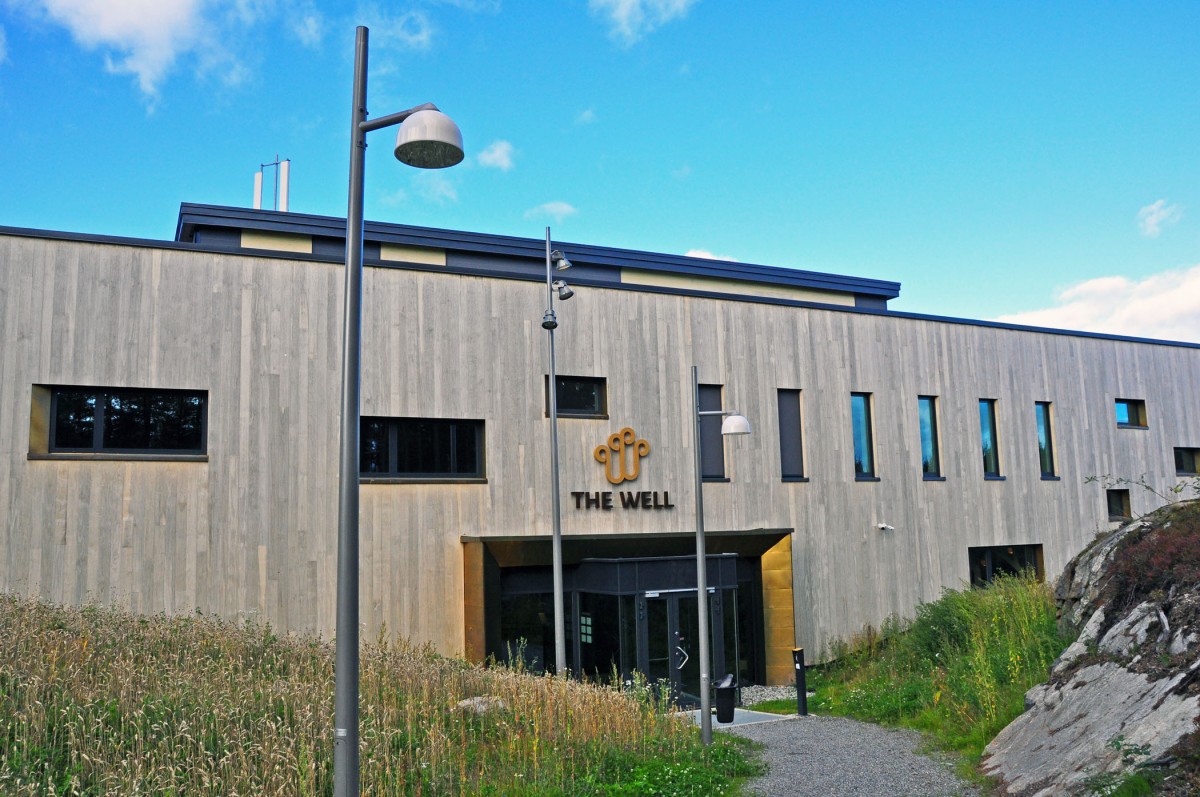 The last day of our short trip my husband and I spent at the new, wonderfully equipped spa at Kolbotn on the outskirts of Oslo, called The Well.

Sprawled over 113 022 sq. ft. on three well-appointed floors of the spacious building, surrounded by tall grasses and pine trees, The Well was founded by a billionaire Stein Erik Hagen, and opened just 9 months ago.

The spa philosophy follows a “daycation” trend that many Norwegians came to appreciate by taking a day off here and there several times a year rather than going on one weeks-long vacation getaway (lucky Europeans!)

Designed by architects Halvorsen & Reine in Nordic style with Art Deco influences, and inspired by the different spa cultures, The Well features 11 pools, a Turkish Hamam, Japanese gardens, a Blockhaus sauna, a Maroccan Rhassoul, waterfalls and grottos in addition to the many other relaxation options that can be enjoyed in the atmosphere of luxurious pampering that permeates the intricately lit facilities. 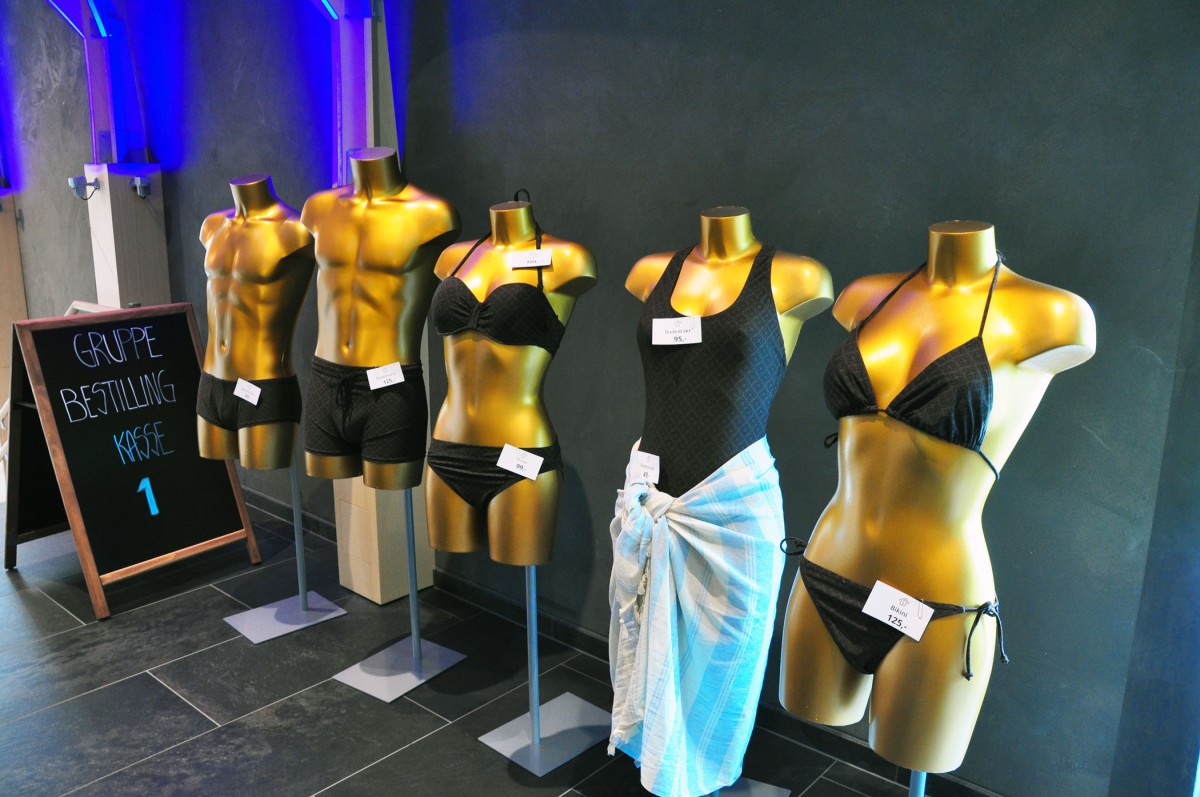 Northern Light Laconium is a mild sauna with heated walls and benches, and with a glass plate in the middle from which gentle green smoke billows up. The Irish Steam Bath is a modern reference to Roman baths. In the herbal sauna, the herbs vary according to the customers’ individual tastes. The Augfuss Sauna is one of Norway’s largest, for more than fifty people. Here, spa employees perform traditional spa rituals. The Moroccan Rhassoul is authentically built with tiles, with a column of water in the middle, and mud from The Atlas Mountains. In the Nordic Section there is a two floor loft sauna that was assembled in Austria with timber from Siberia, before it was dismantled and shipped off to The Well for reassembly.

A shower by the glass wall is surrounded by pictures of the Norwegian mountains. The Waterfall Grotto has a subterranean feel with cold tiles and relaxing sounds. The Tropical section has a Jungle Sauna of high humidity – complete with jungle sounds, imagery and a plethora of different shower nozzles. In the Japanese gardens, 1000-year-old principles of wellness are followed to the dot. You can sit in the warm Onsen pool, or view the Japanese gardens from the Japanese steam bath with its live coral and running water. There’s also a large outdoor Jacuzzi and a pool in the middle of The Well’s own woodlands.

Between the hydro massage nozzles at the pool, the masterful traditional massage provided by one of the skilled therapists on the premises, and a healthy lunch served in a spa’s own café decorated with birch tree trunks and Nordic folk art, the day just flew by in dreamy relaxation.

For more information go to: www.visitoslo.com.