I had been in Australia less than four hours when I saw my first platypus. It was adorable, unreal and clearly had been put together with leftover parts from the animal kingdom. If you think kangaroos are a world apart, the platypus is a guarantee that you have landed in an evolutionary twilight zone.

I was at the late Steve Irwin’s Australia Zoo, not far from Brisbane. That’s “Brisb’n”, mate – there’s nary an “A” in sight. Sure, I was a little jet lagged after the fifteen-hour flight from L.A. but I was excited to add a new continent to my conquests.

My host from Queensland Tourism had scooped me up and whisked me to this, the most famous zoo in Australia, perhaps the world.

It was a big, fun, raucous place with lots of animal encounters. Dashing millennial crocodile handlers played with the fearsome beasts, to the delight of families with excitable children. I swear some of those kids would have run right up to those huge jaws had they not been restrained by their parents’ grip on their leashes, er, child restraints.

It was here I met my crew. My pickup crew. I had drunk alone on my Qantas flight because Tourism Australia had insisted I use their people for my video shoot. This kind of arrangement was always a crapshoot, as you never knew if you would end up with the A Team or the local A/V squad. I had had good experiences with pick up crews in Rome and Edinburgh and… crikey(!), I lucked out again here in Australia.

My new buddies, a terrific cameraman and audio tech, became my constant ambassadors, dining mates, drinking pals and tour guides. I learned the important things from them, such as tipping tends to be a little less in Australia as waiters are paid way more than their international counterparts here in the land of the free.

Another pointer: It was better not to call my fanny pack a fanny pack, as in, “I can’t find my fanny pack. Have you guys seen it?” This only brought laughs and spit takes. Seems the word ‘fanny’ has a very different meaning in Australia. Something to do with a woman’s anatomy.

I guess I shouldn’t have been surprised. As we know, things tend to get a bit topsy-turvy when we venture below the equator.

So there we were at the Australia Zoo’s special Rescue Unit, where they do amazing, life-saving work with thousands of injured animals. We stood over and photographed the poor baby platypus – its beak didn’t fit right. So sad. But then the zoo person told me that was how it was supposed to look. It’s a platypus. The little guy was there for a problem with his foot.

The crew and I bonded over the baby bird…. or mammal, or whatever it was. What a fun intro to Australia. So close and yet so different. Actually, it wasn’t close at all. Did I mention it took 15 hours to fly here, from the West Coast? I was jetlagged.

After the zoo we departed for the Otways, a national park of rain forests, giant tree ferns and thundering waterfalls. We traveled the Great Ocean Road, all the way on the wrong side of the highway – in the manner of the British Empire. 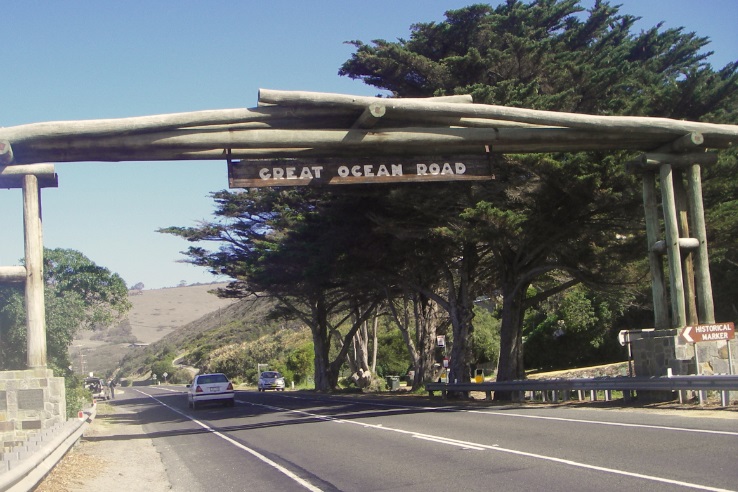 I had encountered this left side of the road silliness before… throughout the U.K., Jamaica, Barbados and wherever else the British had dropped anchor on the wrong side of their ships throughout the centuries.

Motoring in this manner, we would spot crowds on the side of the Great Ocean Road. But instead of a wreck or a woman in a halter top getting a ticket – the usual rubbernecking fodder back in L.A. – the crowds were oohing Koalas! Just as cute as the platypus, these adorable stuffed koala bears hung from trees, right above us. I marveled at the sight – who had put them there? 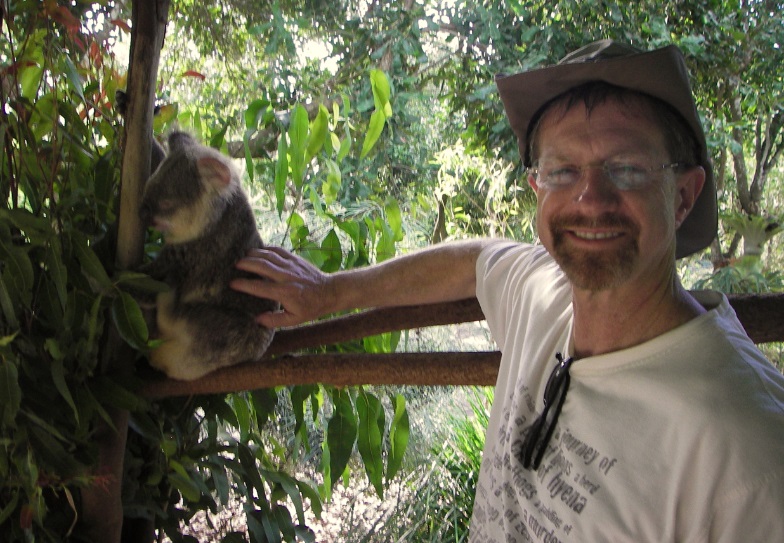 Then they moved! With scratchy, squeaky sounds. They were alive and lived right here – next to The Great Ocean Road. They were much more realistic than the pink and blue Chinese Koala bears I had bought for my kids.

What? What am I talking about? I really had to get some sleep.

Sleep finally arrived at a rustic lodge in the Otways, run by a lovely young couple. They served us a rich country meal. That night I dreamt Southern Hemisphere type dreams wherein my fatigue drained away… in a counter-clock wise direction.

In the morning we stepped outside to a golden field thick with early rising mist. There, not fifty feet away from my disbelieving eyes, a pair of adult kangaroos were boxing… like some Saturday morning kids’ cartoon! They were actually boxing each other as if they were two guys in kangaroo suits, hired for our entertainment. That’s how human they looked. 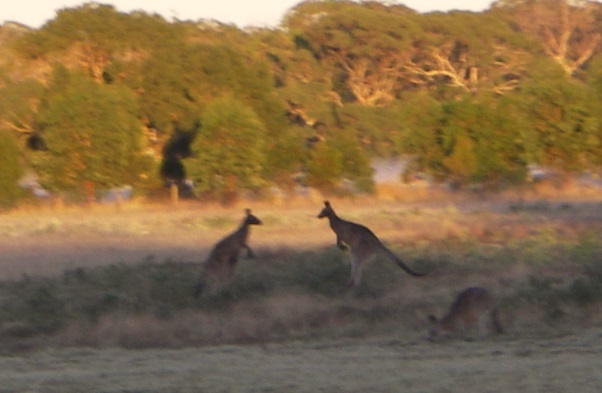 Perhaps word had spread in fern gully that some American was nearby and the animals decided, “Let’s put on a good show for the Yank, mate!”

So there I was, after finally getting a good night’s sleep, still having dream-like visions of exceptional Australian animals performing for me. All before coffee.

I had to get a grip. But then I decided, why bother? Travel is about letting go. It’s about accepting the dreamy stuff that occurs on the road. Like for instance, if I were to be carried off by a koala bear family for a spa weekend… should that happen. 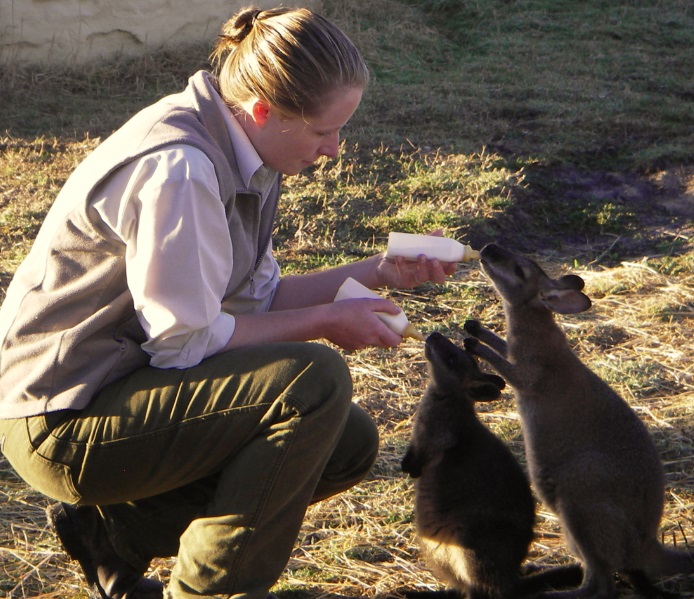 Within days our travels took us to Melbourne, a rather major city in the state of Victoria. We boarded a hot air balloon and floated right above the city center with its collection of skyscrapers… or in our case, balloon scrapers. Can you imagine doing that in the U.S.? 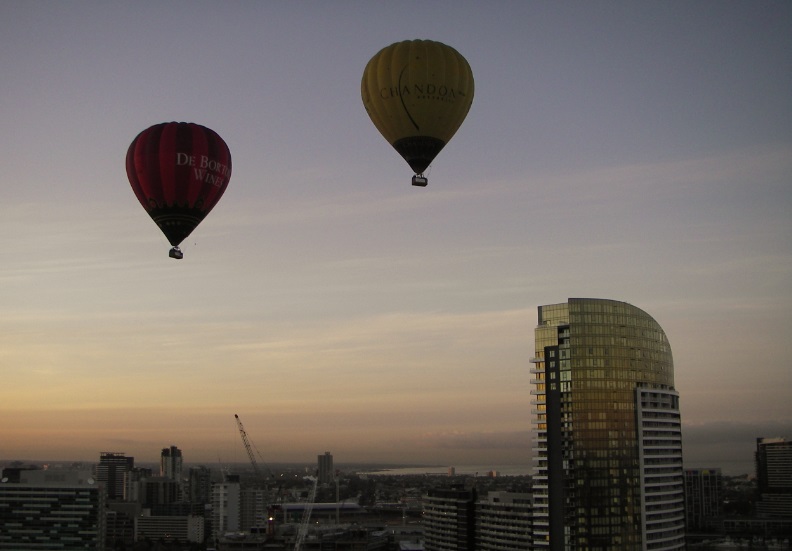 “Hey, let’s go for a hot air balloon ride over the Sears Tower in Chicago.” We’d be shot down. But in Australia, it seems things like this were possible.

Sometimes Australia felt like a sister state to America – it had a frontier and cowboys, wide-open spaces but also big cities and surfing too. Their attitude was loose and new world like ours.

So, on the one hand, everything and everyone looked western and familiar. Yet on closer inspection… their beaks didn’t fit quite right.

But of course not. This was Australia – not America, not Europe.

The happy, unexpected result? Taking in the intense landscape of the place with its vigorous population, this isolated continent could easily be a stand-in for another planet. A parallel world where life was like ours and yet… perhaps they enjoyed 3.5 dimensions to our boring 3.

So if you were to pose the question: Is there life such as ours, extraterrestrial life somewhere out in the universe? I’d say absolutely. It’s in Australia.