My wife Fern and I successfully navigated around Amsterdam and environs to celebrate our first wedding anniversary with a trip to the Netherlands, a country roughly the size of Maryland, but with about the same number of bikes as people (about 17 million).

We were fortunate to be in Amsterdam at the peak of the tulip festival. We spent ½ day at the Keukenhof tulip and flower gardens and bulb fields, which are only open two months per year (late March to late May), at the peak of the blooming season.  The world’s largest tulip fields feature the Netherlands most famous flowers in a dazzling kaleidoscope of colors.  We meandered for several hours along well-manicured paths and by ponds, struck by the vivid colors and hues with about 600 kinds of tulips in almost every color imaginable!  As we climbed up the Groningen windmill on the grounds, we saw fields of literally millions of tulips and other flowers in stunning colors stretching out over 80 acres of land. 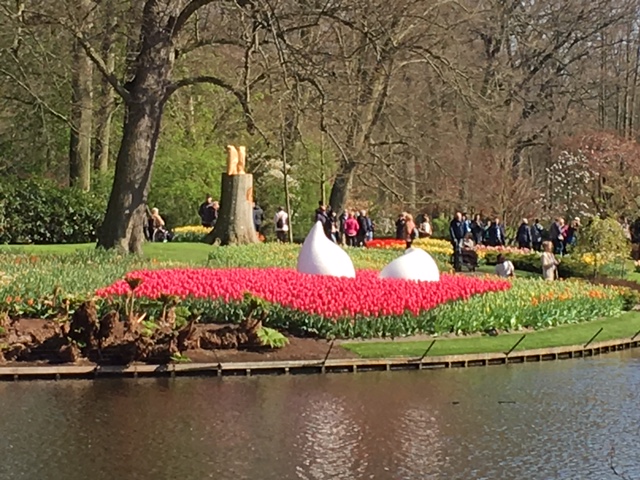 Central Amsterdam is not huge, but the sites are spread out enough that public transportation is essential. The above ground tram system was easy for us to learn as we traveled from our hotel in the south towards Central Station in the north or east toward the Jewish cultural quarter.  Tram transport and entrance to many museums and attractions were included in our I AM AMSTERDAM passes, which we would highly recommend.  These passes can be purchased for one to four days. 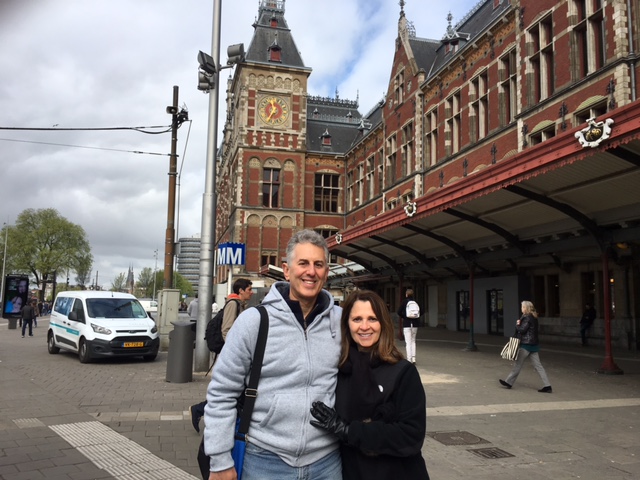 Highlights and high points- (1) the museums: With the museums close together in the museum quarter, it was easy for us to museum hop for one full day.  Housed in a beautiful and recently renovated neo-Gothic neo-Renaissance building, the Rijksmuseum’s vast collection is on part with the world’s great art museums.  The English language tour was amazingly informative.  Our guide explained why Rembrandt’s The Night Watch stood out amongst his paintings in the Gallery of Honour (e.g., techniques of depth and lighting) and how the museum itself was built to showcase this large work.  With the world’s largest collection of Vincent’s works, the crowded Van Gogh Museum – through an audio tour and great signage – does a superb job to highlight his troubled life, his development as an artist through various art periods, as well as his relationships with artist contemporaries.  Although we aren’t great fans of contemporary art, we toured the smaller Stedelijk Museum and the Amsterdam Diamond Museum.   Just outside the museum quarter, we took the obligatory photos by the bigly huge I AM AMSTERDAM sign. 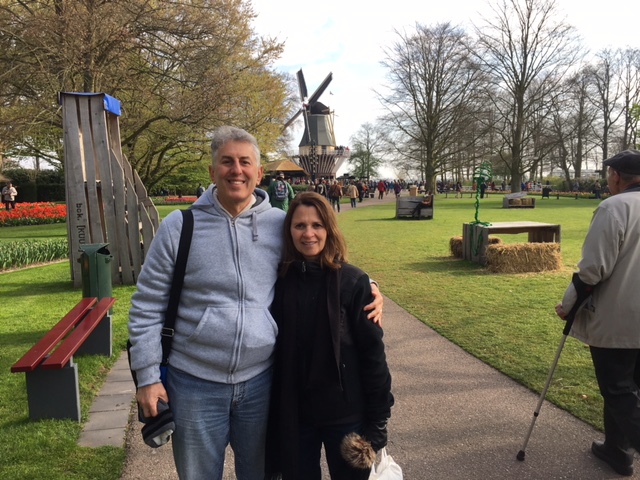 (2) The free walking tour: We love to go on free walking tours to learn information from the locals and the Amsterdam free walking tour did not disappoint us.  Starting in crowded Dam Square, our native guide was a wealth of information as we strolled together through the infamous Red Light District by other sites in the city center.  We learned how in Amsterdam the world’s oldest profession is essentially a “collection” of independent contractors providing sexual services for a fee, renting out their spaces of employment and providing a large percentage of fees to the city in taxes.  The most imposing site on Dam Square, the 17th century Royal Palace (formerly the City Hall) was well worth a separate visit to gaze at the Golden Age of Amsterdam with its lavish furniture and furnishings from Louis Napeleon, period paintings, white marbled floors and sculpted walls.

(3) The Jewish cultural quarter: We spent one full day focused on the many sites of our Jewish heritage, of which several are sad relics from World War 2.  Clearly the Anne Frank house is a must see, as the English language signage and audio tour fully explain the complete story of the Frank’s family secret hiding space and the tragic plight of Amsterdam Jews during World War 2 (with about 100,000 killed).  Three other museums tell the story of the prosecution of the Jews in the Netherlands between 1940 and 1945 – the National Holocaust Memorial, the National Holocaust Museum and the Dutch Resistance Museum.   We learned one particularly inspiring story of how Dutch citizens smuggled hundreds of children into hiding from a day nursery when trams blocked the view of Nazi soldiers assembling Jewish families at the Hollandse Schouwburg Theater across the street, from where they would be deported to concentration camps.  We also spent time touring the massive and majestic 17th century Portuguese Synagogue which still holds services and once was the home of the world’s largest Sephardic Jewish community.  Finally, we visited the Jewish Historical Museum which presented us with a broad picture the religious traditions of Jews in Amsterdam over many centuries, set within a complex of former 17th century synagogues.  Ironically our guide (Sem) for the fabulous free walking tour of Amsterdam was Jewish.

(4) The John and Yoko Lennon Honeymoon suite: By staying at the Hilton, we were able to view the suite where the Lennons staged their infamous week long bed in for world peace in 1969.  The suite still maintains extensive Lennon memorabilia, including one of John’s guitars, a beautiful white bed spread featuring a symbol of John and Yoko, John’s autograph on a wall and sayings on the window above the bed from their protest (hair peace, bed peace) and numerous pictures from their stay.  We were told that room 702 is available for bookings, although for many more Euros than the standard rooms!

(5) The iconic canals: Canals are a primary reason that Amsterdam is so picturesque and why it is often called the Venice of the north.  Our canal cruise provided us with a good orientation to the city as we traveled below street level along the concentric canal belts and by the two rivers (the Amstel and the Ij).   We really enjoyed looking out of our hotel room daily, watching boats of various types and sizes glide by on the Amstel canal.  We were very impressed by the historic 17th century Van Loon canal house, now open as a museum.  Most surprising to us was the size of the house alongside the Keiizersgracht canal (the Emperor’s canal) which contained a magnificent garden and a coach house.  The beauty of the historic canals led to their placement on the UNESCO world heritage list in 2010.

Some of the attractions did not live up to our expectations. The Heineken experience was juvenile and nowhere near as informative as our tour of the Coors Brewery in Colorado.  Our ½ day trip to Delft and the Hague was very disappointing as the bus did not stop in the Hague at all, we simply did a drive by of the sites – and the whirlwind tour of the pottery factory in Delft seemed geared around getting us quickly into the gift shop to make a purchase of the blue and white ceramics.