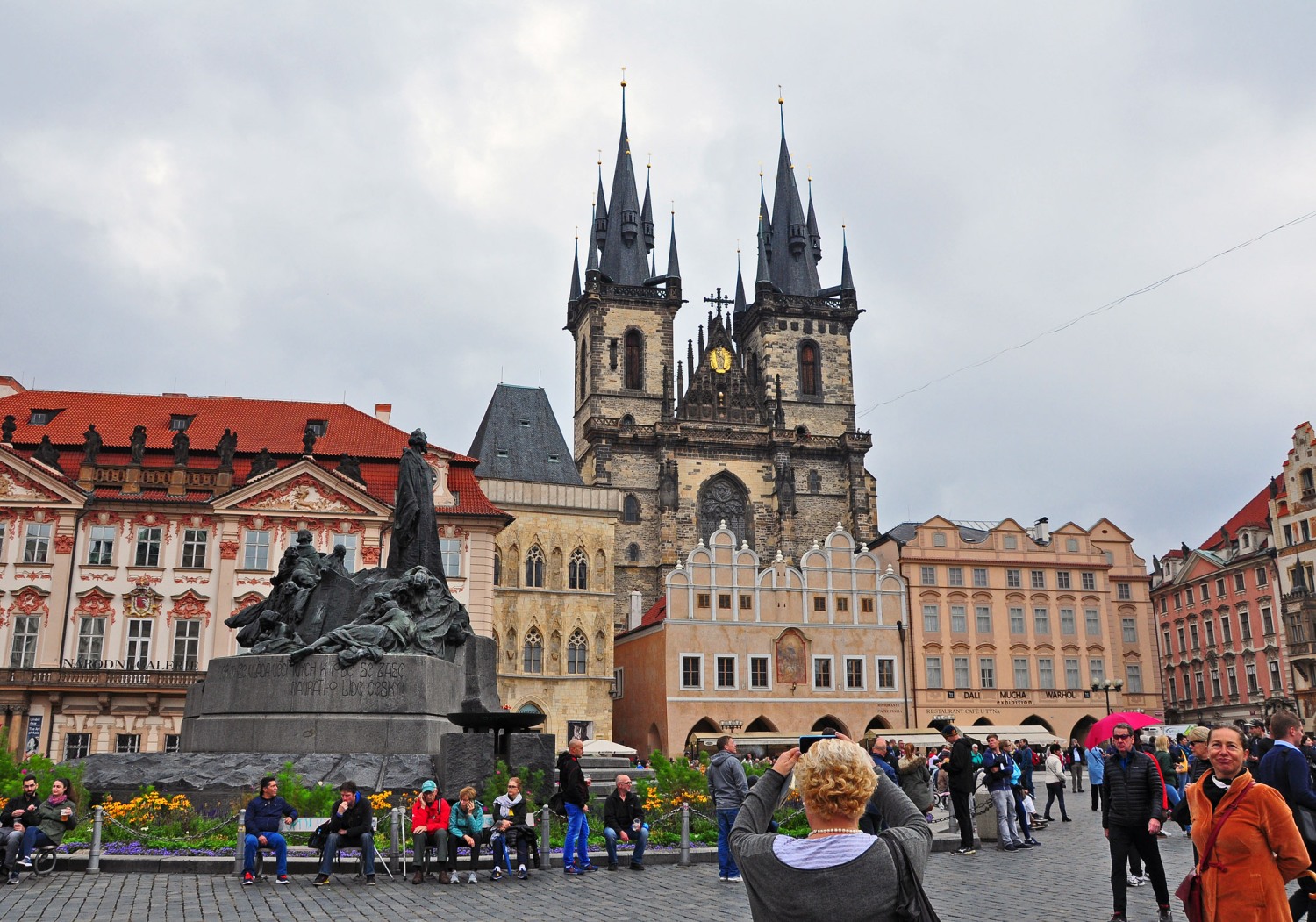 In Prague, every traveler faces a challenge of finding a place to stay that would be close to the major historical sites. And major sites in Prague are plenty! From the Old Town to the New Town, and from the Castle District to Lesser Quarter, the finest examples of Gothic, Renaissance, Baroque, Rococo, and Art Nouveau architectural styles are pulling all eyes upward, threatening cobblestone-related injuries to the viewfinder thrill-seekers. 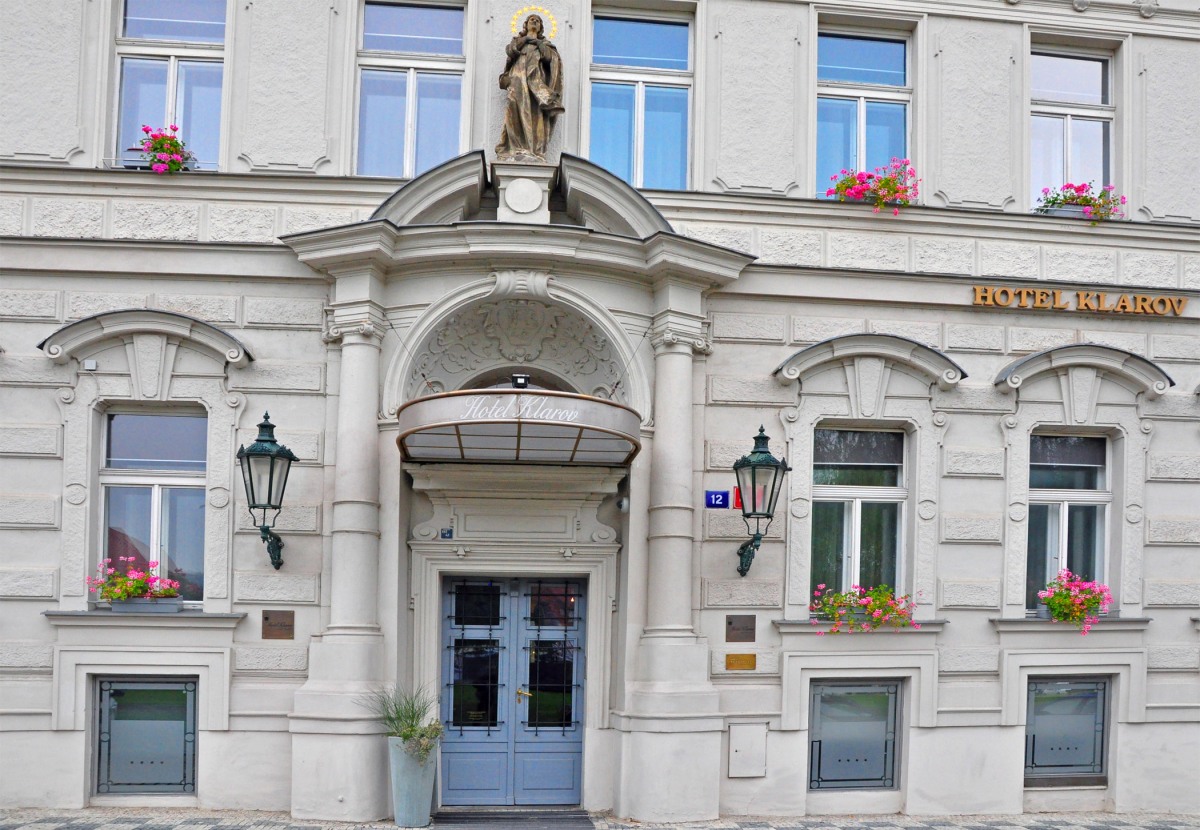 Were we lucky to settle at Hotel Klarov when my husband and I arrived in the capital of Czech Republic onboard economically conscious RegioJet bus? You bet we were! From our third floor window at the 25-room boutique hotel in the 1889 Neo-Baroque building we were able to see the legendary 1357 Charles Bridge across the high-leveled Vltava River, the spires of St. Vitus Cathedral and the patinated domes of Prague Castle rising above the red roofs of Mala Strana. 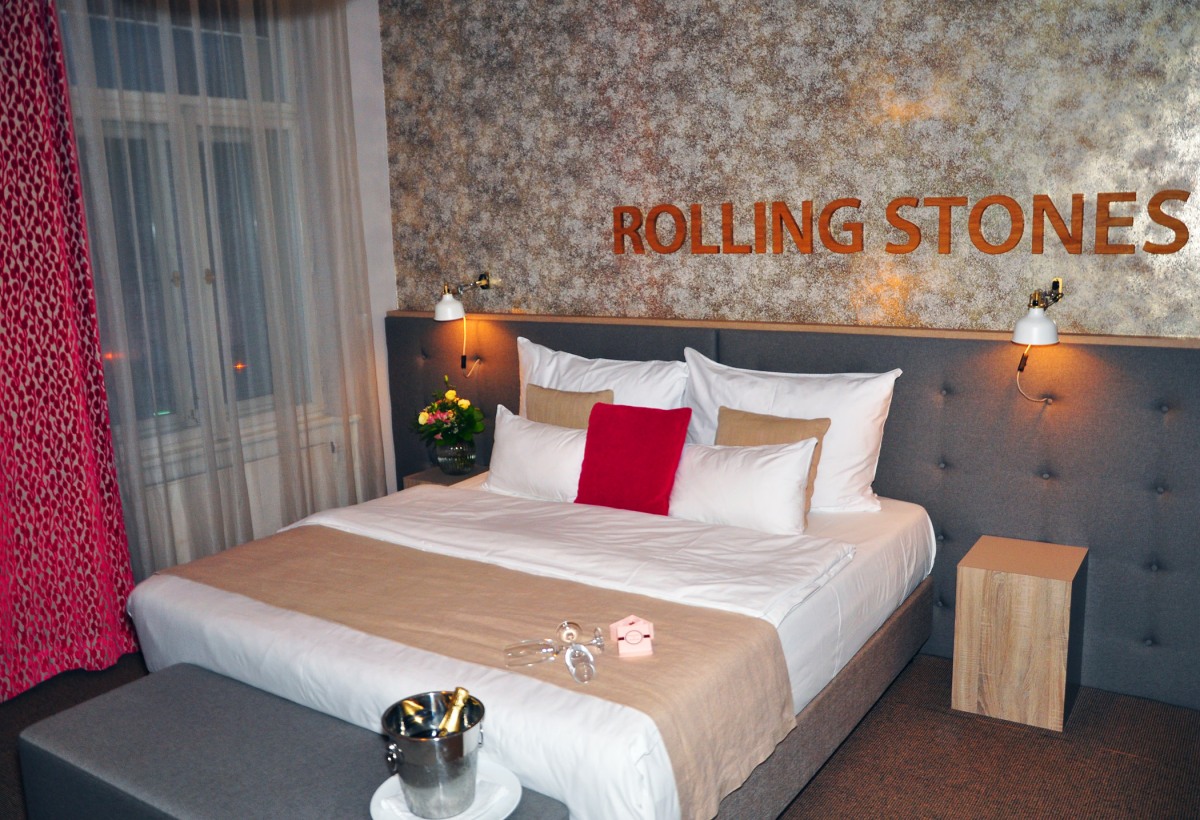 Interestingly, the spacious rooms at Hotel Klarov are embellished with names and memorabilia of world-famous musicians who visited Prague and left their mark in the city. Ours was dedicated to Rolling Stones who on one of their visits provided illumination for the Prague Castle so it would be lit at night and visible from afar. 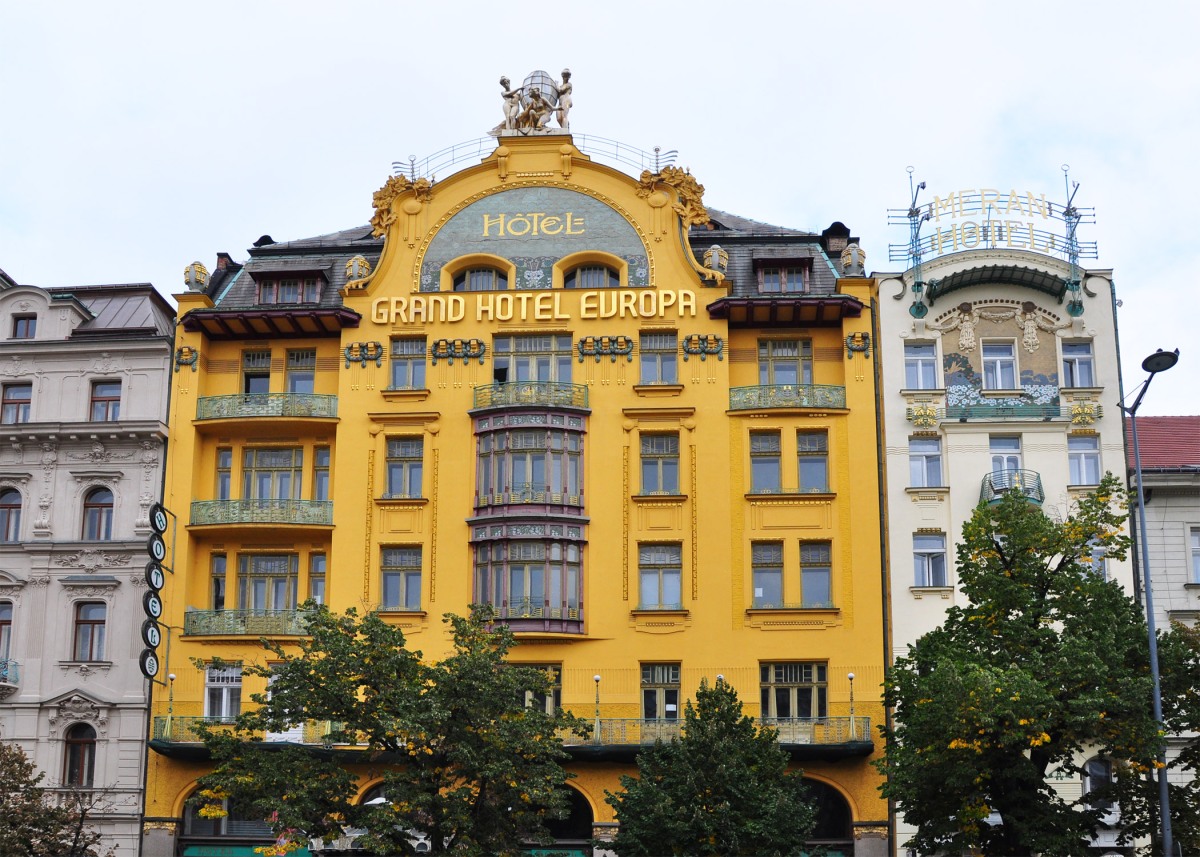 To get closer to all the treasures of one of the largest and best-preserved European cities, right after the hotel breakfast we embarked on a walking tour with Jitka Simkova of Prague Walks. Our guide took us across the Charles Bridge with its 30 statues, allegedly constructed in alignment with the tomb of St. Vitus and the setting sun on the equinox, and crowded with international visitors at any time of day and night; through narrow streets and wide-open squares to the lavishly decorated Belle Époque buildings, like the Grand Hotel Evropa; Baroque churches, and splendid old synagogues in the Jewish Quarter. 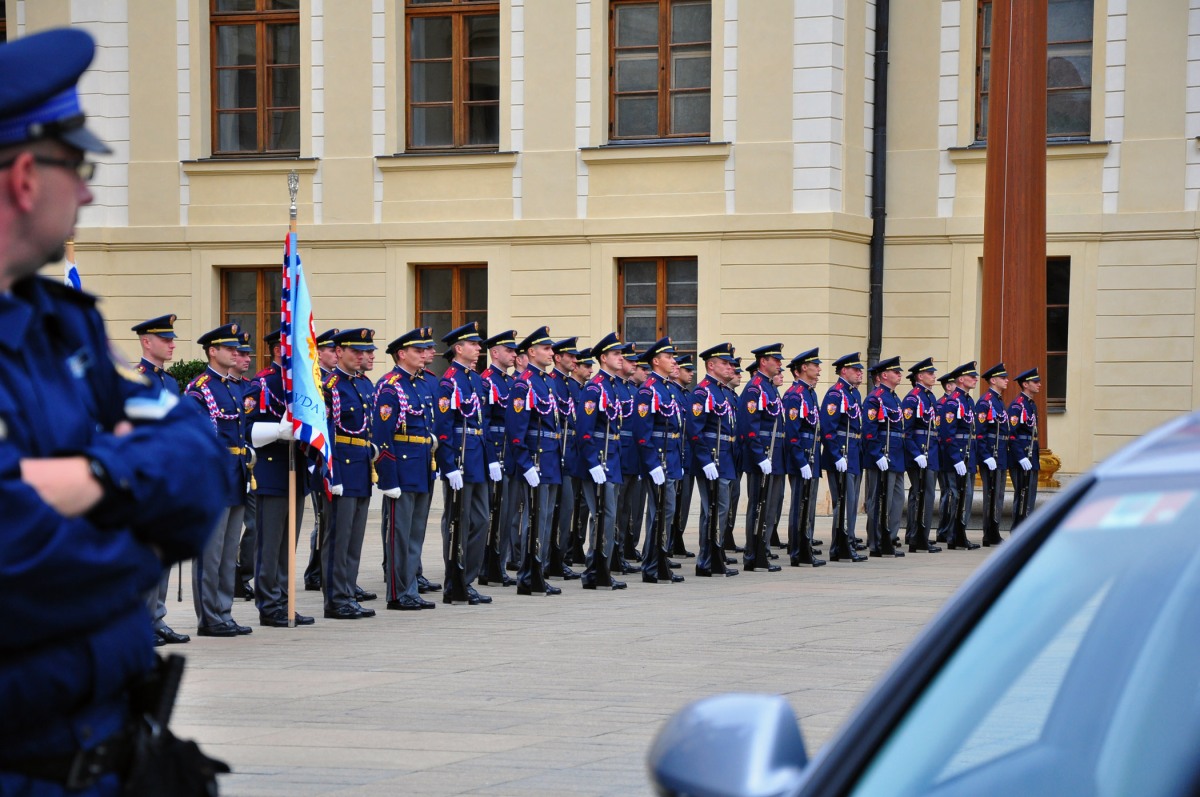 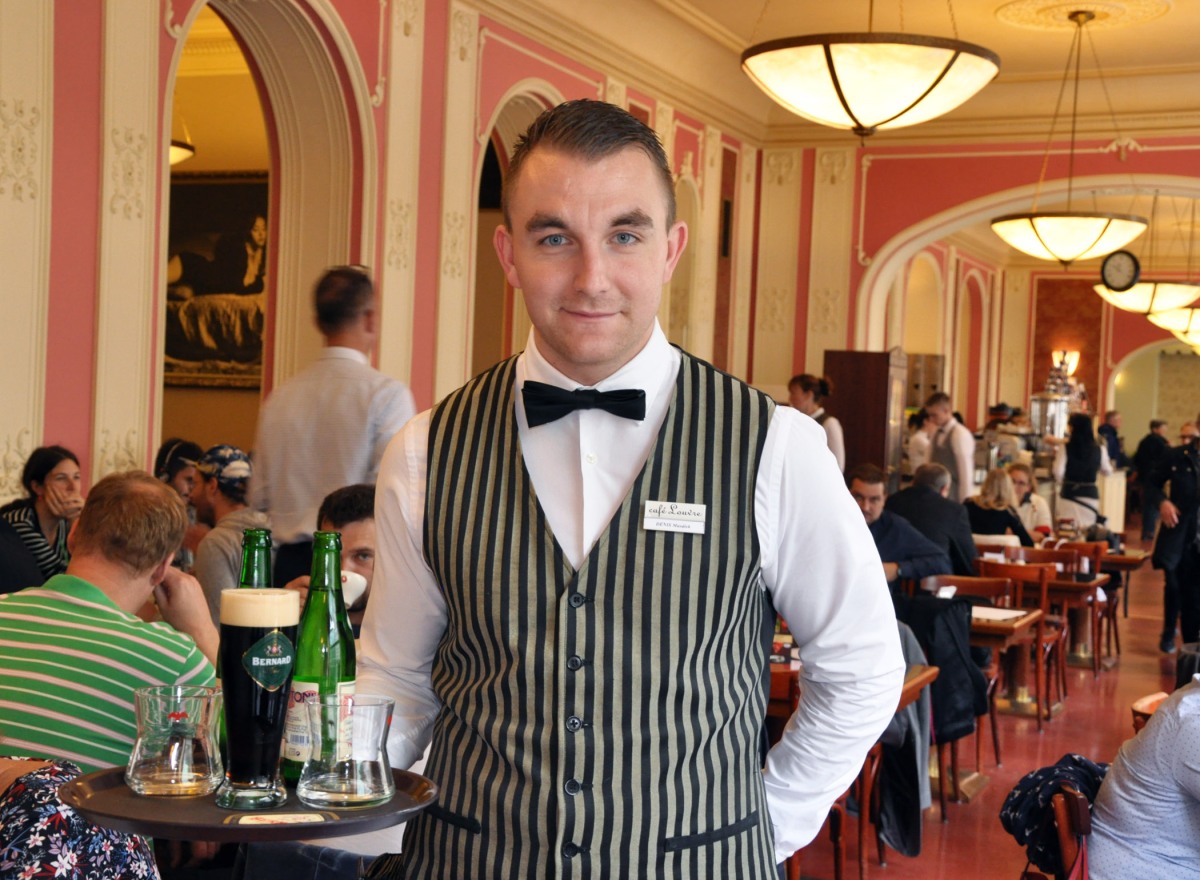 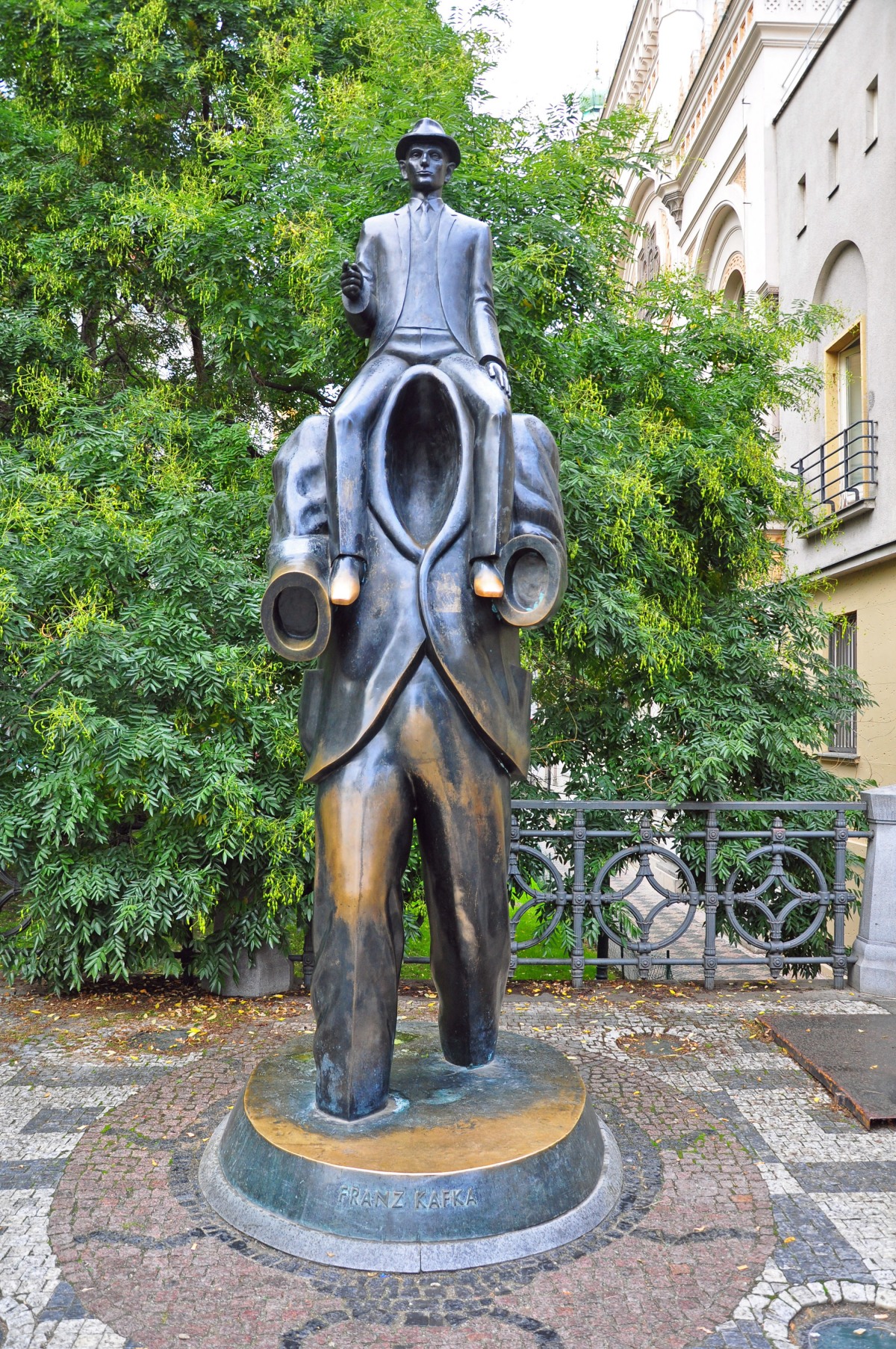 We watched changing of the guards at the Prague Castle, originally built as a walled fortress in about 970 – the largest ancient castle in the world, formerly home to Bohemia’s kings, now the official residence of the Czech Republic’s President, visited Café Louvre for a posh coffee break, and marveled at the curious monument to Franz Kafka by Jaroslav Róna. The bronze statue replicates a scene from Kafka’s first novel “Amerika” in which a political candidate at a campaign rally is carried to the people on the shoulders of a faceless giant. 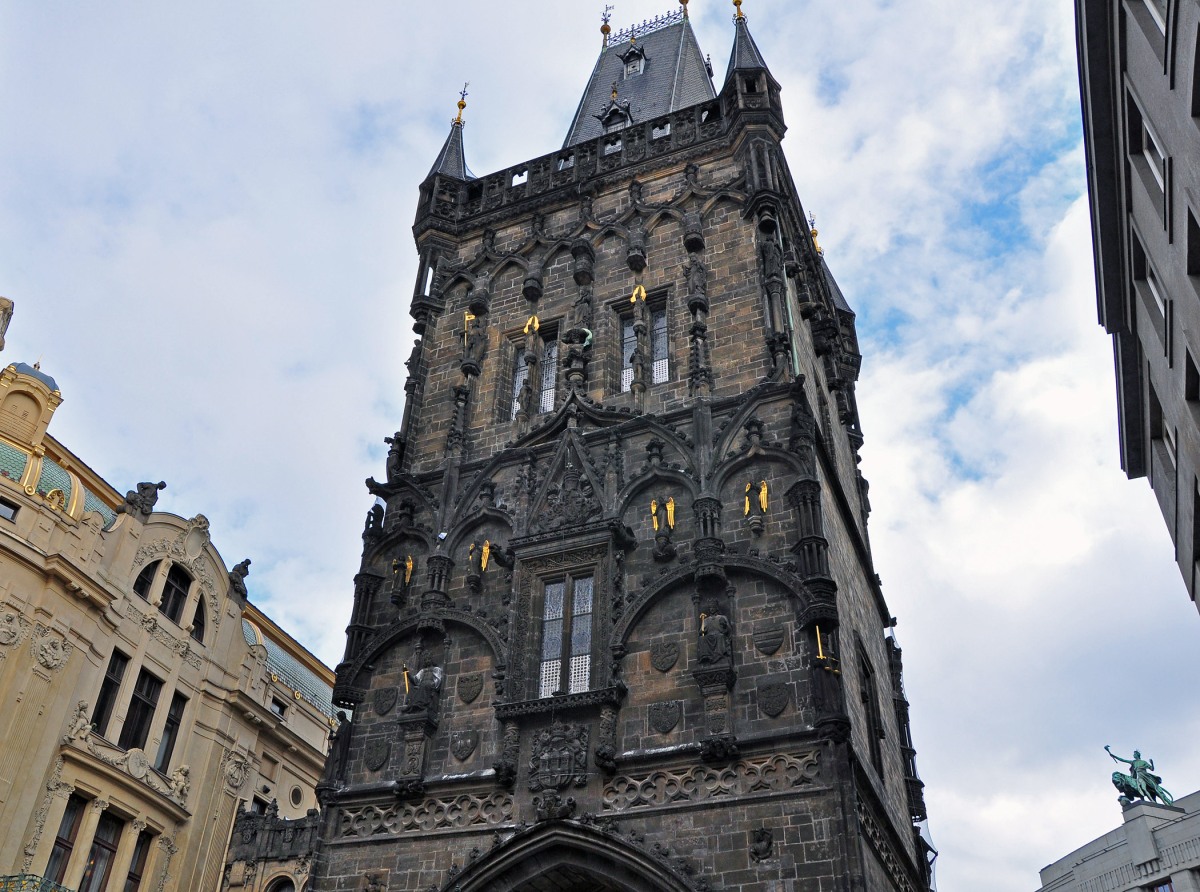 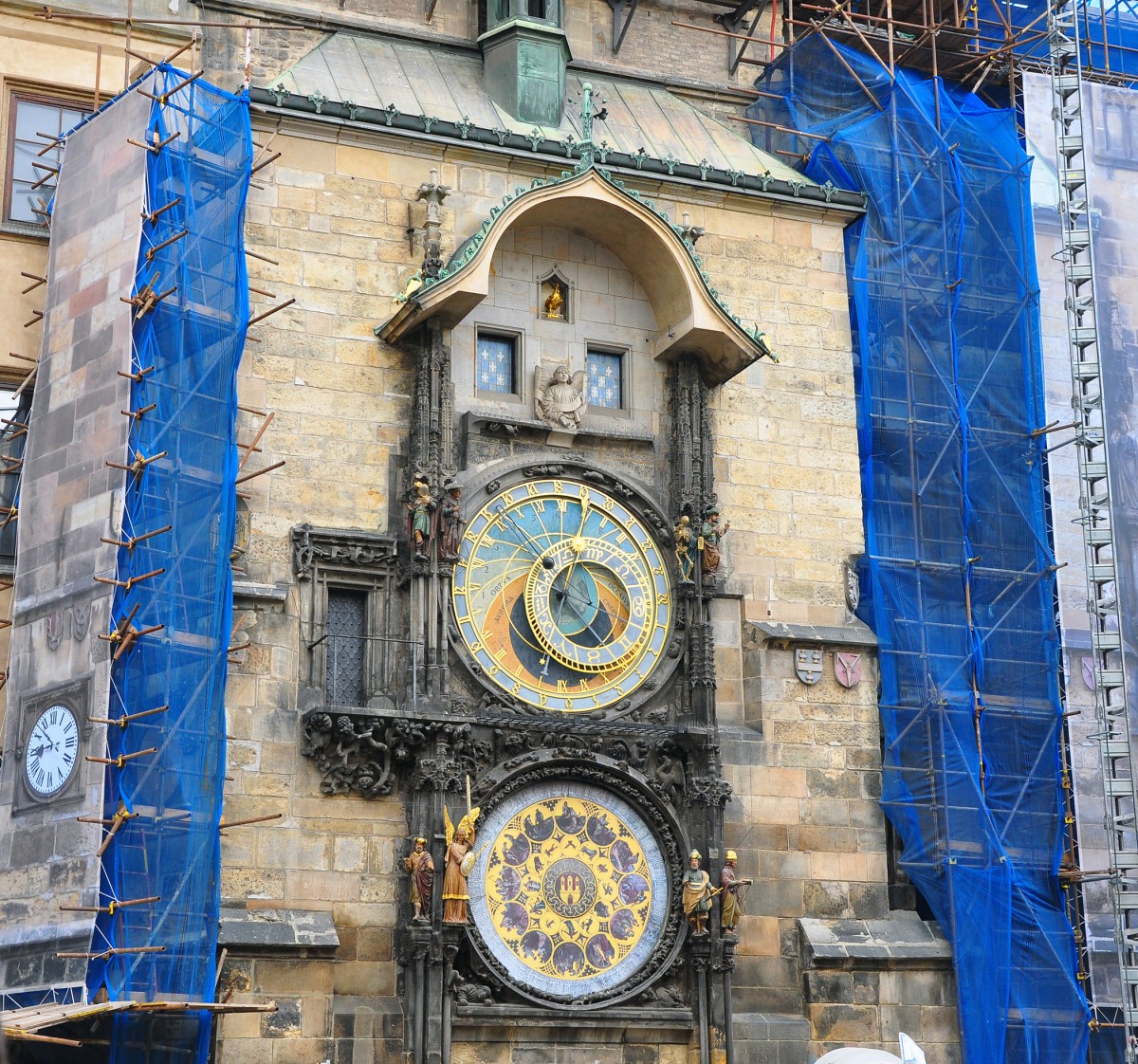 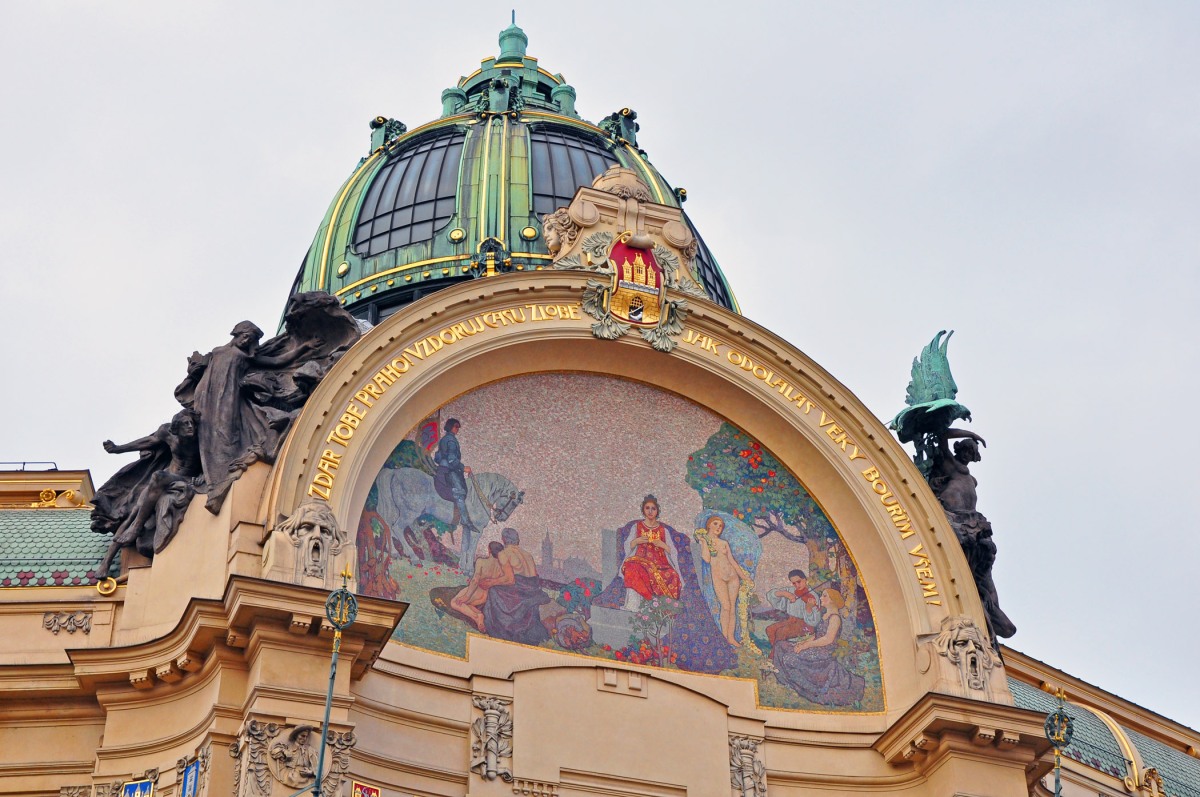 Besides the world-famous sights, like the 11th century Gothic Powder Tower remaining from the original city gates, the Astronomical Clock of the Old Town Hall, first installed in 1410, and the gorgeous epitome of Art Nouveau style – the Municipal House built in 1912 – we visited a few 20th century monuments, some of them grim reminders of the recent dark past overshadowed by Nazism and Communism. 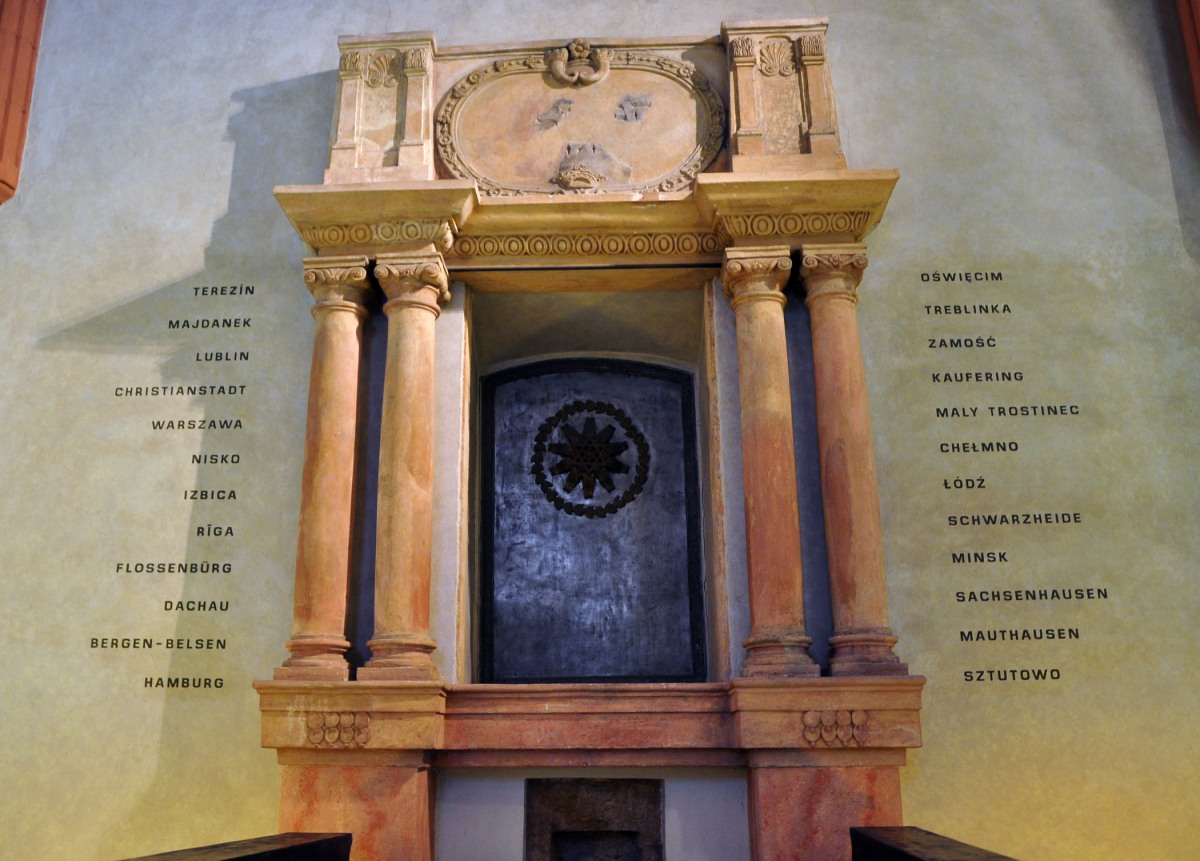 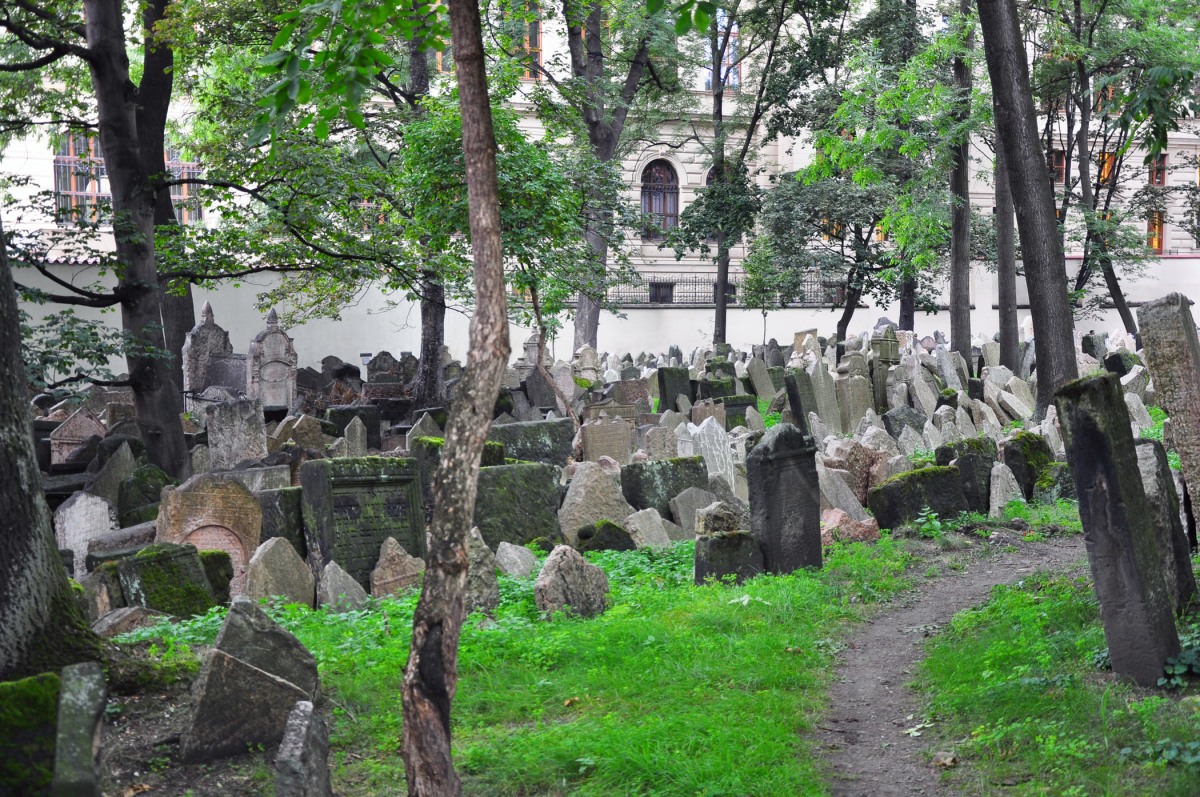 Pinkas Synagogue, built in 1535 in Gothic and Renaissance styles near the Old Jewish Cemetery with the most ancient graves from the 1300s, is now the Memorial of Holocaust Victims of Bohemia and Moravia whose names are listed with each last name followed by the first names of family members, their dates of birth and dates of death. There are 77,297 names of Holocaust victims – countless Josephs, Alberts and Rudolfs, Hannas, Marias and Albinas, ranging from babies mere months old to 80-somethings, all killed in WWII years – covering the entire wall space of the synagogue, with the geographical locations of 24 death camps listed in the center of the main hall. Among the victims names’ on the walls are the grandparents of Madeleine Albright, the first female US Secretary of State.

The Memorial to the victims of Communism by Olbram Zoubek presents bronze figures of a man descending stairs while gradually deteriorating, losing limbs and breaking open. The numbers, etched on the monument commemorate 205,486 arrested, 170,938 forced into exile, 4,500 who died in prison, 327 shot trying to escape, and 248 executed during the Communist rule in 1948-1989. 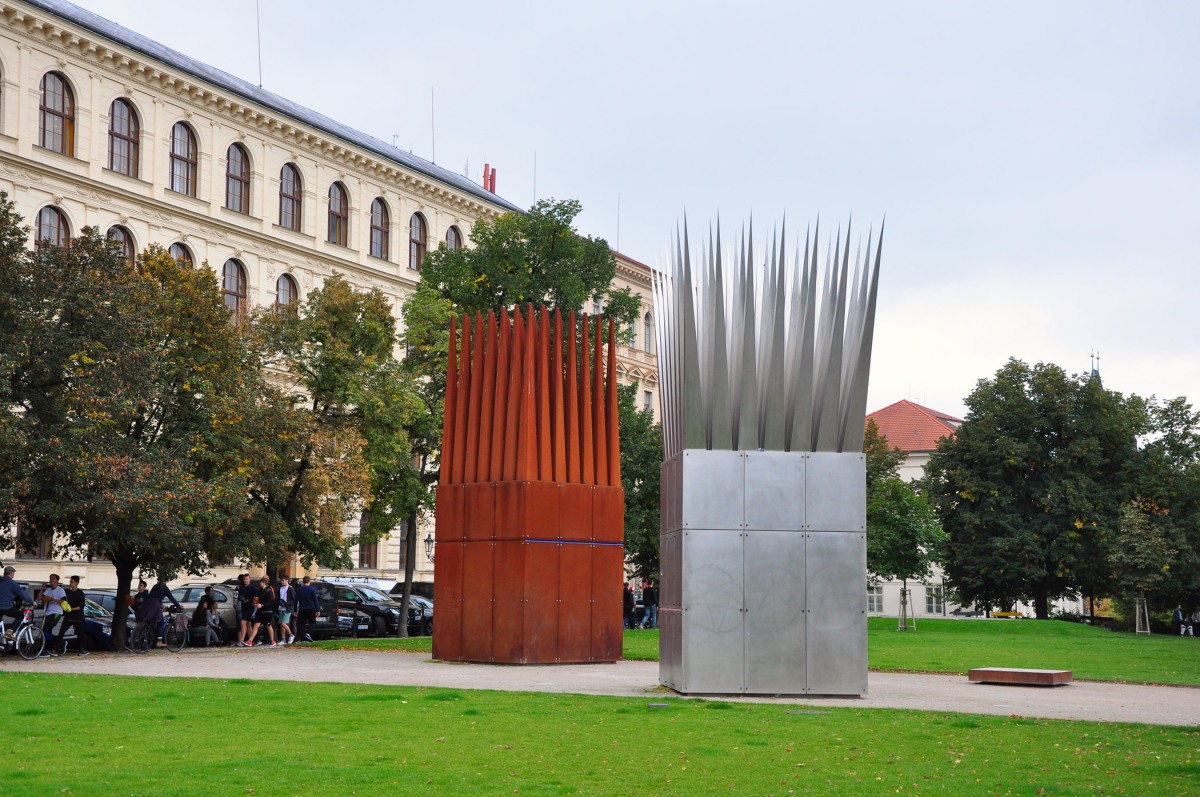 Two abstract steel sculptures by John Quentin Hejduk inspired by David Shapiro’s poem “The Funeral of Jan Palach” are dedicated to the memory of the Prague student and his 1969 self-immolation in protest of the 1968 Soviet invasion. Called The House of the Suicide and The House of the Mother of the Suicide the structures are accompanied by a plaque displaying the poem whose lines, “When I had a voice you could call a voice/My mother wept to me/My son, my beloved son/I never thought this possible” reflecting the ideological oppression of the regime and the desperate protest of the dissident. 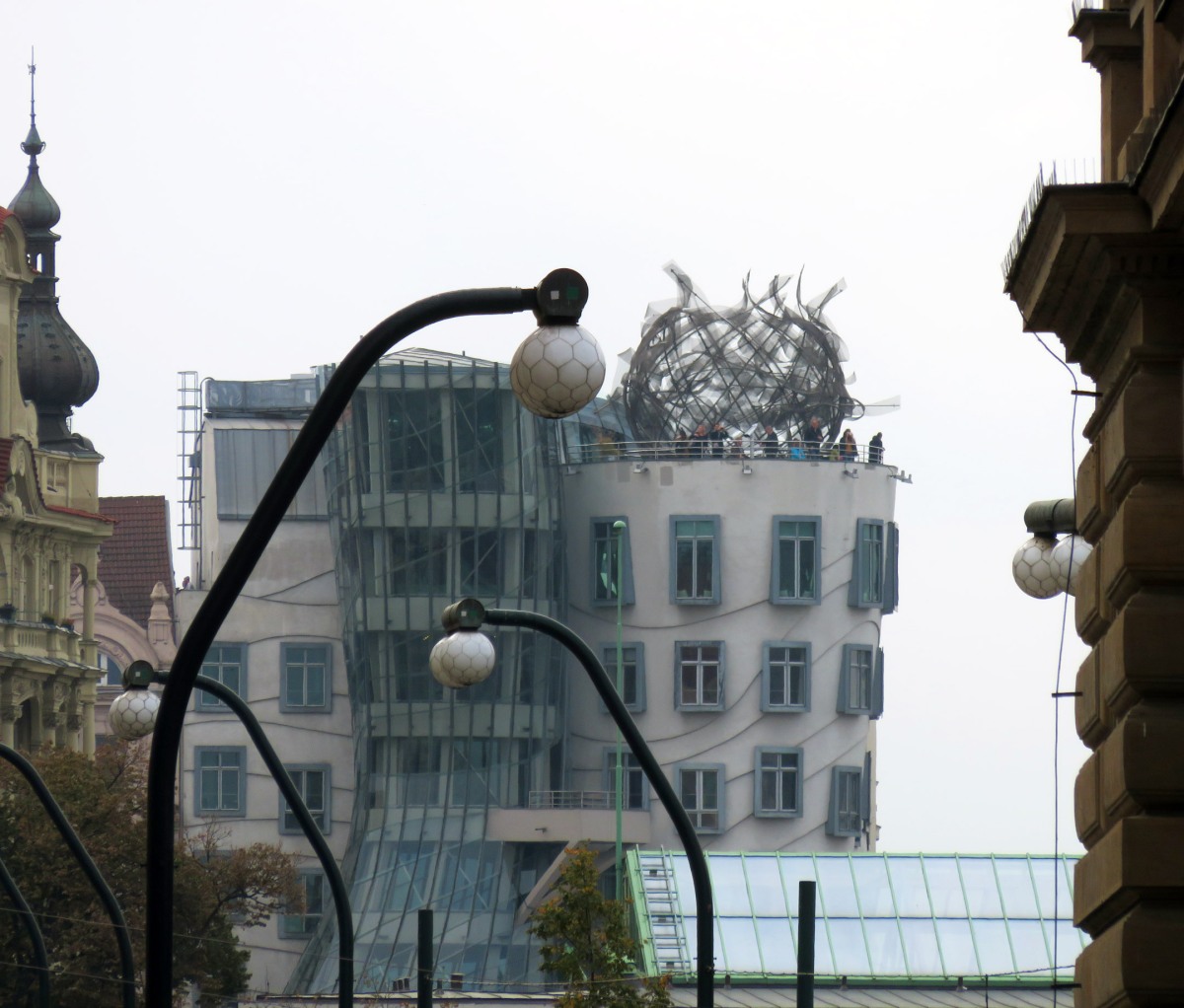 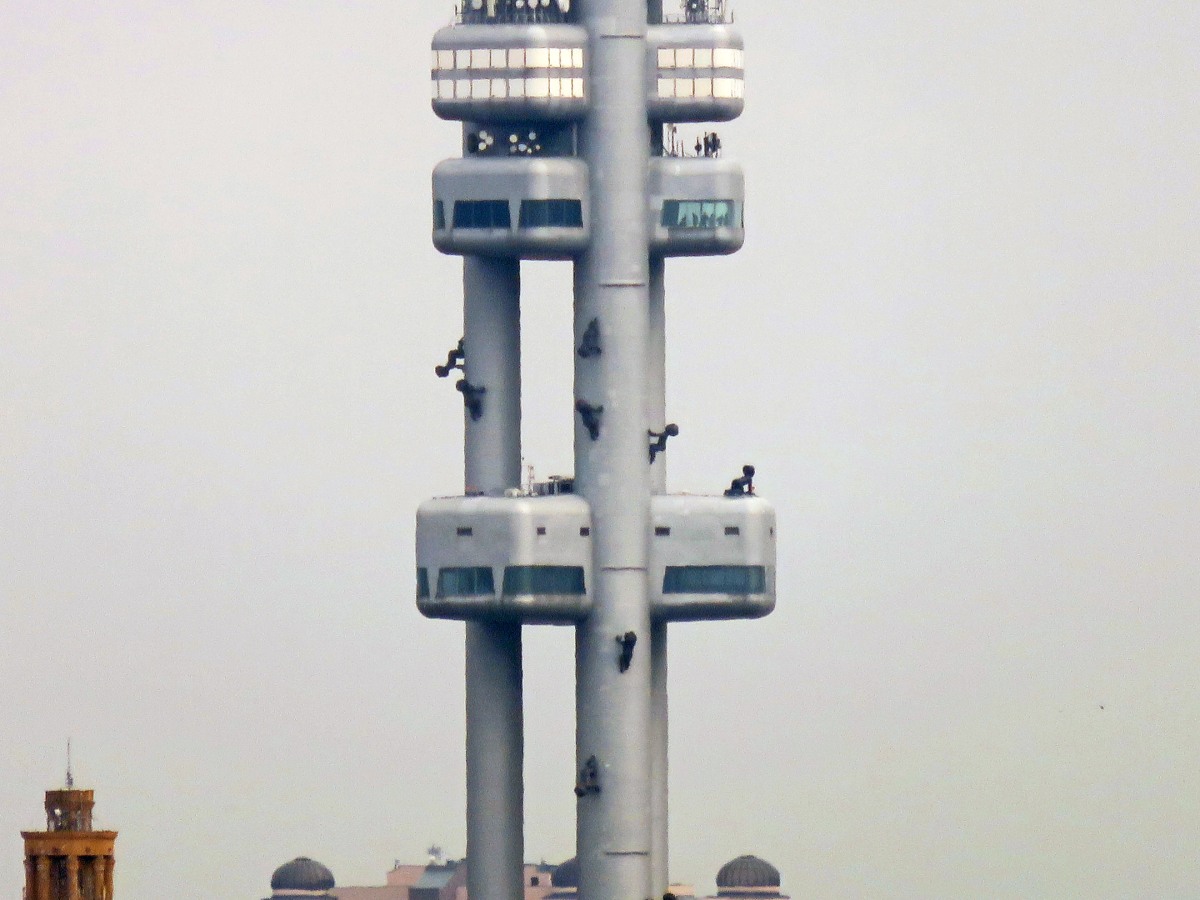 Among the contemporary architectural wonders visible from afar from the city hills and bridges are Frank Gehry’s The Dancing House completed in 1996 and Zizkov Television Tower by Vaclav Aulicky, built in 1992. In 2000, ten black fiberglass sculptures by David Cerny depicting giant babies were installed on the TV tower crawling up and down its pillars. 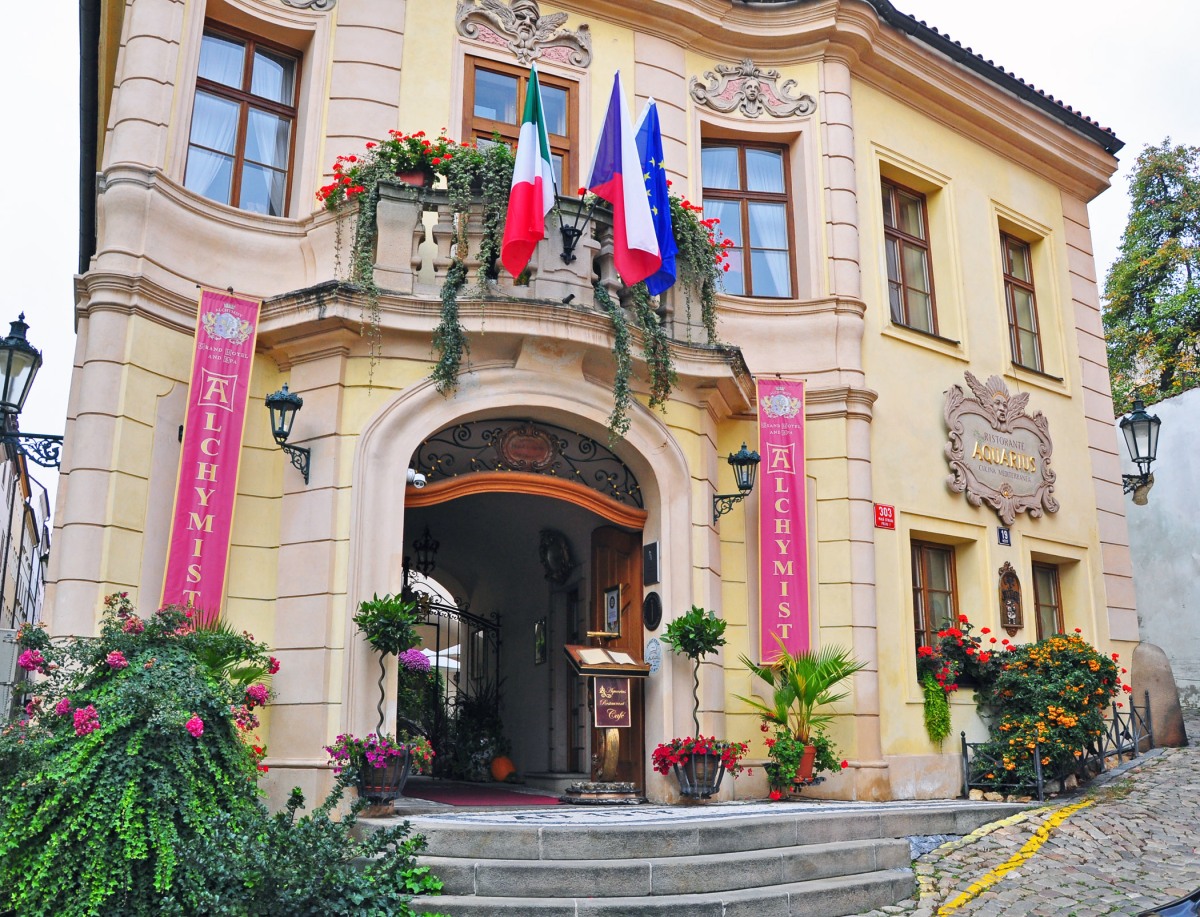 …In preparation to our trip to Prague, we planned on staying at the most luxurious and highly acclaimed Alchymist Grand Hotel and Spa in the city center, next door to the American Embassy. The hotel availability, severely limited in the high season of autumn travel, yielded only one precious night in a royally decorated suite with plush rugs, gilded furniture, and a crystal chandelier in a 45-room dream palace comprised of four historical houses, half-millennium old. 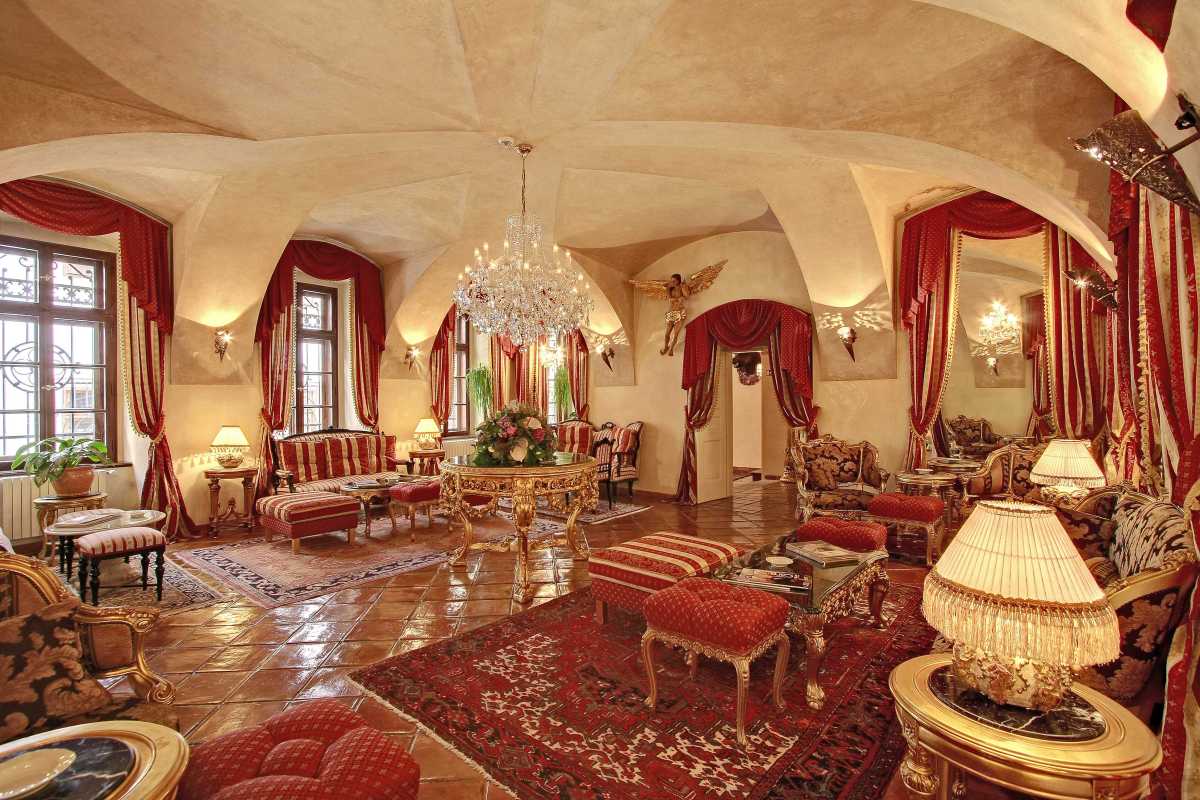 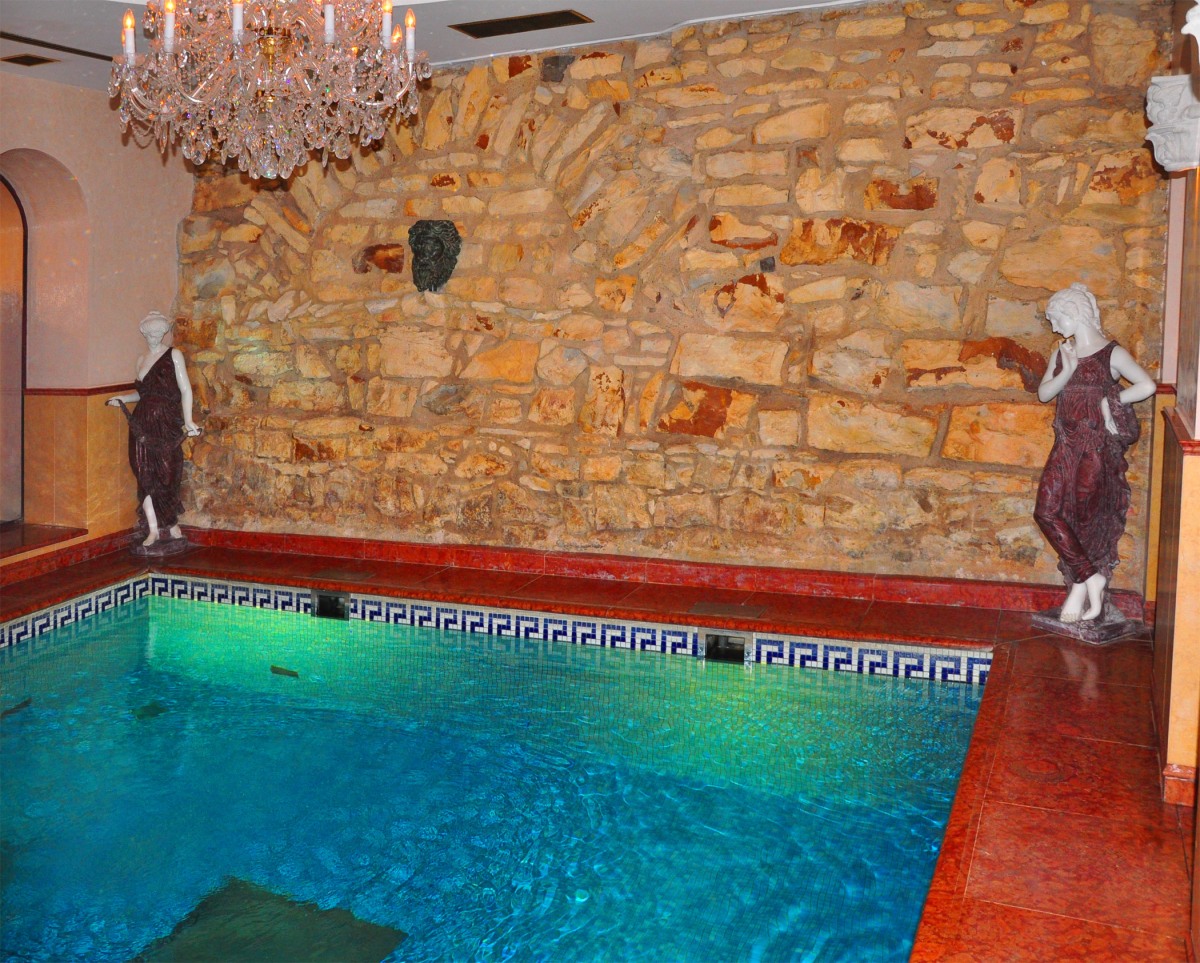 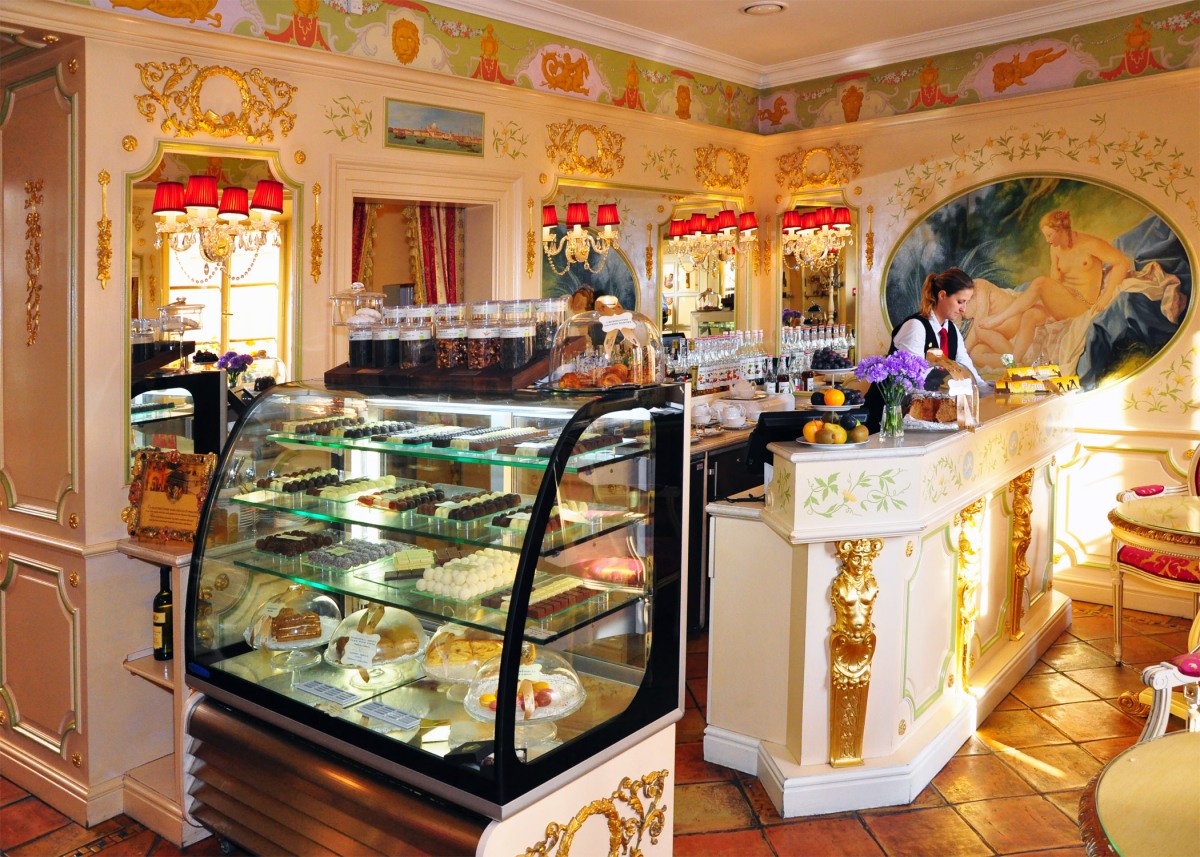 Rich hues of red and gold in a vaulted-ceilinged lobby adorned with live orchids; murals on the walls of the Aquarius restaurant, depicting exotic scenes of faraway lands; the Renaissance courtyard with a cherub fountain, and the turquoise water of a swimming pool at the Ecsotica Spa were topped by the melt-in-your-mouth hand-made chocolate pralines prepared at the cozy and decidedly decadent Barocco Veneziano Café. Even this brief encounter with the Alchymist luxuries left an indelible mark on our entire Prague experience, making it a memorable highlight of this year’s travel adventures. 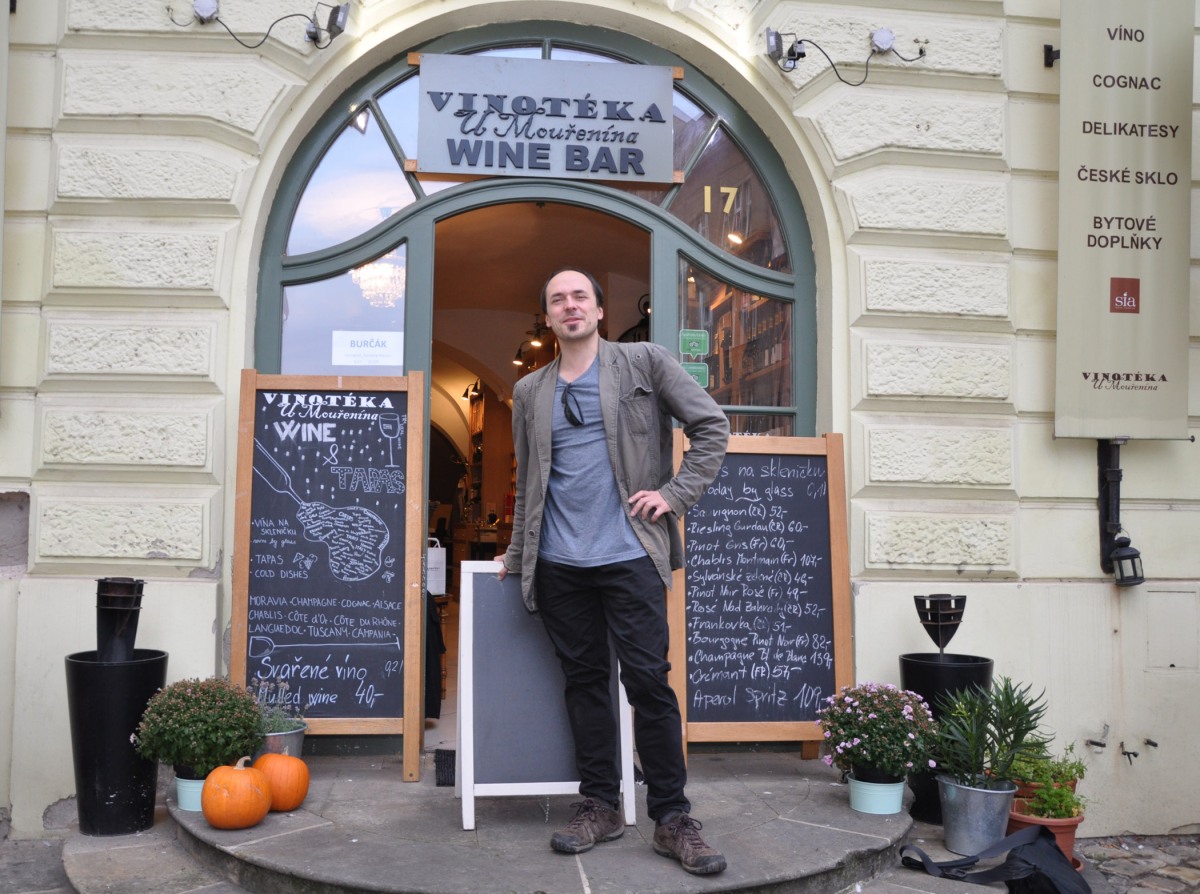 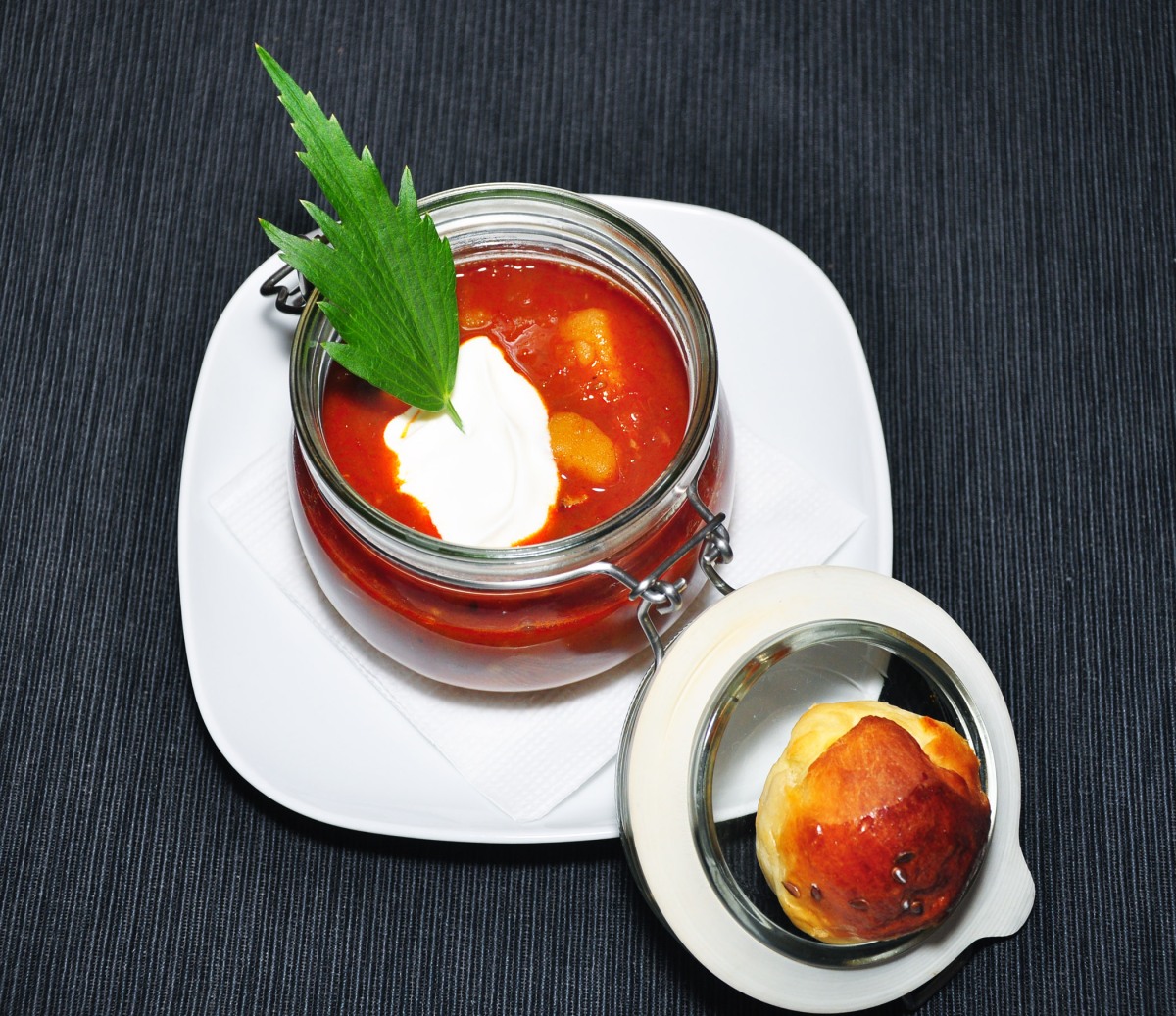 Of course no European travel is complete without some culinary exploration, and for that we turned to the tried and true Eating Europe – a great walking tour company that operates in several European capitals with a staff of professional guides, highly knowledgeable in history as well as in food scene of each city.

On an Eating Prague tour that was titled Prague Evening Food Tour, our excellent guide, Jan Macuch took us to family-owned bars and cafes so tiny they could’ve been easily missed in a maze of narrow streets and dark alleys surrounding the Castle hill. And that would be a pity!

From artisanal beer accompanied by locally produced cured meats and cheeses to amazing local wines, and from freshly prepared hearty soup to traditional goulash served with home brewed ale – our small group of culinary curious travelers consumed plenty of special treats along our leisure walk to the John Lennon Wall, Kampa island, and the famous Café Slavia – a historic hangout of Czech artistic intelligensia with live piano music and the notorious “green fairy” of Czech absinth. 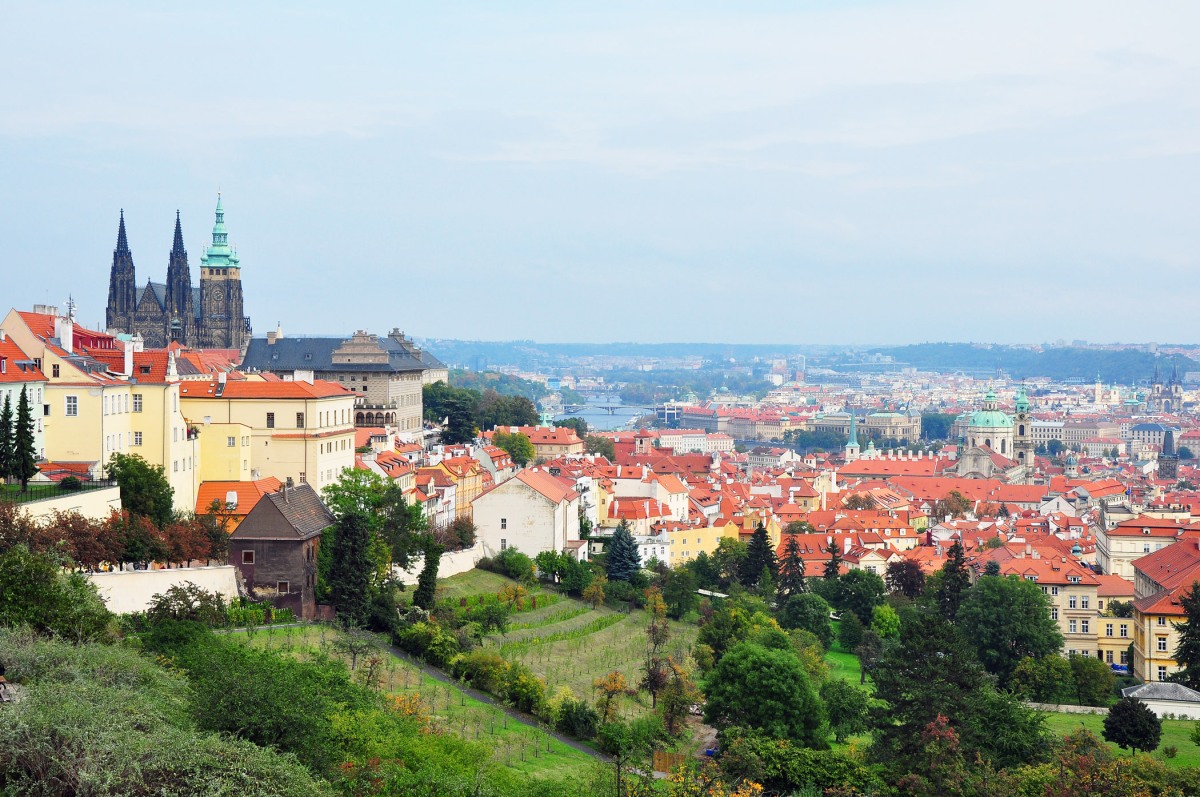 It was time to say good-bye to the “Golden Prague” with its spires and bridges, white swans on Vltava, and its old-world elegance and hospitality.