One innovative product can change millions of lives, and the Trionic Veloped is doing just that. Opening possibilities all over the world, the Veloped is known as the only off-road walker on the market. From Swedish snows to beaches in Australian to mountains to hiking trails everywhere, Trionic’s Veloped is making outdoor life possible for people of all ages who previously struggled with varying disabilities.

Designed and developed in Sweden, the Veloped has enhanced the health and happiness of Pennsylvania resident Jill Groves, 37.

“It’s amazing how much the Trionic Veloped has impacted my life in such a short time,” reported Groves, who began using the walker in August of 2017, when she and her husband embarked on a cross-country road trip during the time of the eclipse. 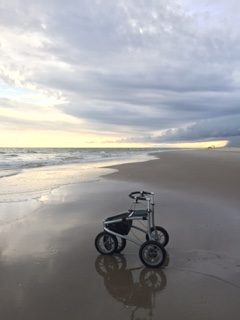 “I’ve been disabled for about 10 years, with varying levels of functioning that affect mostly my stamina and my ability to walk. I’ve acquired multiple devices through the years, trying to find the best option to allow me to remain active.”

In 2017, Groves began to become more active and adventurous, with the support of family and friends. She walked several 5K charity events with the rollator, which was somewhat helpful but also a bit of a hindrance.

“When using the rollator off-road, it would constantly get caught and pitch forward on grass, stones, sticks, and bumps,” Jill recalled.

The friction of the rollator also caused irritation and blisters on Jill’s palms if she didn’t wear gloves. Because of these inconveniences, Groves began searching the internet for a more user-friendly walker that might work better in off-road conditions. She knew that increased tire size would be important, and her goal was to find a walking aide that would assist in future 5K walks and her upcoming cross-country vacation.

Finding http://www.trionic.us during that web search changed Jill’s life. The Trionic Veloped was perfect for her needs.

“I couldn’t wait for the day it would be delivered and I could test it out,” Jill said. The day that the industrial-size box arrived, with two handles reinforced with plastic (making even the delivery employee’s life easier!), was an exciting one.

The assembly instructions were very easy to follow,” said Jill. “Basically I just needed to attach the tires and adjust the handle height.”

The Veloped’s tires easily detach with the push of a button, making the walker simple to transport, and the handles have numbered notches for reminders of favorite settings.

It was love at first step for Jill Groves that summer day.

“I tried the Veloped in the yard. I could easily walk on grass, and over tree roots and paver stones. I even tested it by rolling it over the stone fire pit that was piled with small logs and sticks. None of this stopped the Veloped, and I was in love with it.”

A week after the Veloped’s arrival, Jill used it for the next 5K.

“I walked quicker than I have for any of the others,” Jill said. “I was able to walk without stumbling or getting caught on anything, including curbs, stones, and sewer drains, all of which would have impeded a regular rollator walker. The sliding seats allows for space to walk within the walker for better support, giving me the ability to take bigger steps without hitting the walker with my feet or shins. The basket is great for holding bottles of water and other items without fear of them falling out. It even has a build-in cover to protect items in the basket from rain.”

The Veloped garnered lots attention that day, with many asking about the off-road mobility aide.

“Because it doesn’t look like a regular walker, I felt less disabled and more empowered,” Jill said. “For the first time in years, I kept up with non-disabled people . . . and during a race!”

Then came the planned cross-country trip with her husband Derrick. The Groves were traveling in a small car, but transporting the Veloped was no problem. They attached the walker to a bike rack on the back of the vehicle.

The first stop was a campground in Missouri, where the Groves would view the eclipse.

“I was able to walk all over the campground, and I used the Veloped to carry my laundry when it was time to do the wash,” Jill reported. “The owner of the campground used a rollator walker, but I introduced her to the Veloped and she loved it. She used it to get around the campground and to personally visit each campsite.”

After the total eclipse of the sun, the Groves continued on to Arkansas, where they would visit a gem-mining field. It was there that Jill gave the Veloped the nickname of “Jasper,” the gem that the Groves dug up the most.

“It was acres of tilled field with a few gravel pathways. The only thing that stopped the Veloped was the deep rows of soil. I was able to get around all the rest, including the muddy patches where others didn’t want to go. I was also able to walk around the town where we stayed, and visit shops and restaurants. Not all areas had sidewalks, but I was able to keep going as if there were.”

If it sounds as if the Veloped is magic, it is.

“Climbing to the peak of Mount Mitchell was our next destination,” Jill said. “The Veloped helped me to walk all the way up to the peak viewing area.” Groves now looks forward to future hiding adventures that without the Veloped were inaccessible.

The final destination of the Groves’ road trip was North Carolina, where they visited several beaches along the coast.

“I had apprehension and I thought that maybe the Veloped had met its match, and that I would have the normal struggle or inability to walk on the dry sand and down to the water line,” Jill recalled. “Boy, was I wrong! I walked right onto the beach and down to the water without a struggle or losing my balance. It’s been about ten years since I could do that! I was then able to take a romantic walk along the surf at sunset with my husband. It felt so great; I didn’t want to leave at the end of the evening.”

Jill’s trip was an absolute dream, she said, and she was thrilled at being able to participate in activities that would have been impossible with the Trionic Veloped.

And now, the future looks bright for Jill Groves, with Jasper in her life.

“The Veloped has truly improved my life and my confidence in myself to do more and to explore many more new adventures in the future,” Jill said.

The Trionic company, founded by a few young men in Sweden, is changing and improving lives all over the world. Disability has become ability, and the impossible has become possible.