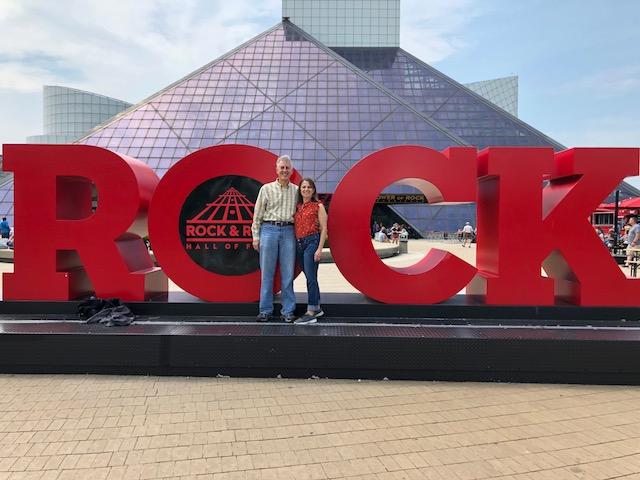 My wife Fern and I found Cleveland to be an underrated destination for a fun three day weekend. Now the second largest city in Ohio, Cleveland has a population of about 400,000 residents.  Its major attractions are contained within a modest sized downtown area and nearby communities in the city and its suburbs.  During our stay, Clevelanders were proud to inform us about their city by the lake and its cultural activities.  Our highlights:

Located downtown at 1100 Rock and Roll Boulevard, the museum’s towering building with its glass pyramid overlooks the shores of Lake Erie.  Opened in 1995, the Hall of Fame contains galleries on seven levels.  The museum’s exhibits depict the history of rock and roll and its music culture.  The massive collection includes concert posters, instruments, stage outfits, handwritten lyrics and personal items from the musicians.  The museum staff highlights its favorite pieces and marks them as spotlight artifacts.

Starting at the lowest level, we began with the roots of rock.  We particularly enjoyed an exclusive 14 minute film on Elvis and a 30 minute film with sentimental clips from Dick Clark’s American Bandstand.  Most impressive for us were the once in a lifetime performances featured inside the Connor Theater on a very large screen with great sound, including footage from Rock Hall induction nights and incredible concert combinations that we had never before seen or heard (such as Billy Joel with Bruce Springsteen and Tom Petty with Prince).  In this theater, we felt like we were in attendance at these spectacular shows.

The Hall’s entrance fee varies depending on the day, with adult admission costing from $23 to $26.  With very few dining options near the Hall of Fame and not wanting to leave this exciting venue, we ate dinner at the All Access Café which had a very limited menu.  http://www.rockhall.com

The Cleveland Museum of Art is located at 11150 East Boulevard in the University Circle area.  The art spans 6000 years and contains 45,000 works of art in more than 40 galleries.  This internationally known collection is very broad and diverse.   Opened in 1916, the museum includes both the original neoclassical building and updated modern wings.

We attended the one hour daily tour which took us through the museum in a chronological fashion – from ancient to modern, but focused on a particular theme of that day (i.e., horses in art).  Highlights included the impressionist galleries (with Monet water lilies), a wall of Van Gogh paintings, jeweled Faberge eggs from Russia, Tiffany glassware and an outdoor sculpture garden (with one version of Rodin’s The Thinker).

To spend more time at the museum, we stopped for lunch at the Provenance Café, which had many cafeteria style stations with tasty reasonably priced fare.  We were refreshed by taking this time out from looking at the art within the large airy courtyard under a soaring class canopy.

Both the museum and the tour are free, although parking is not free.  Just outside the museum, Wade Oval is a beautiful space to enjoy this scenic area.  http://www.Cleveland Art.org

The Cleveland Cultural Gardens consist of a collection of public gardens within Rockefeller Park, not far from University Circle.  With benches and trees throughout the gardens, we enjoyed a stroll through several of the sites.   There are about 30 different garden sites, linked to different countries or ethnic groups whose immigrants contributed to the heritage of Cleveland.

The gardens continue to very much be works in progress.  Some of the gardens are very elaborate (such as the ten foot tall sculpture of Gandhi in the Indian garden and a replica monumental arch in the Syrian garden, both of which included informative signage).  Others are little more than a sign with or without flowers (such as the Ethiopian garden).  We felt these gardens have great potential for educational purposes once more fully completed.  http://www.culturalgardens.org

On the grounds of the Mandel Jewish Community Center in Beachwood, a dramatic sculpture honors the memory of David Mandel, a 28 year old U.S. born Israeli weightlifter.  He was one of 11 Israeli athletes killed by Palestinian terrorists in the 1972 Munich Summer Olympic massacre.  Berger was a Cleveland native who emigrated to Israel.  This memorial is the only U.S. commemoration of the 1972 Olympic violence.  Managed by the National Park Service, this memorial is said to be the country’s smallest national park.

The Berger memorial is nearly 14 feet high, 11 feet wide and weighs 6000 pounds.  It is made of a type of steel alloy which oxidizes naturally over time to yield a rich rust coloring.  The sculpture depicts the five Olympic rings broken in half, symbolizing the interruption and cancelation of the Munich games by the tragic events.  The 11 segments on which the rings rest represent each athlete whose life was taken.  There is an upward motion in the broken rings to suggest the peaceful intent of the Olympics and hope for the future.  www.mandeljcc.org

Food (Eating Our Way through Cleveland)

The long time New York style Jewish deli is no longer easy to find.  Corky and Lenny’s definitely fits the bill, with its oversized sandwiches, fresh baked goods and crunchy pickles on the tables.  We had lunch at the main location in Woodmere.  The turkey was juicy and moist; the rye bread was tasty.  We chatted with the very friendly owner Kenny Kurland who treated us to rugelach pastries for dessert in a number of extremely delicious flavors (including chocolate, cheese and raspberry).  The atmosphere of the restaurant is very warm.  In Cleveland, this really is where “people meet to eat!”  www.corkyandlennys.com

Now with nine locations, Mitchell’s Ice Cream is easy to find in the Cleveland area.  The chain began in 1999 when two Cleveland brothers Pete and Mike Mitchell opened their first store.   We stopped for a refreshing snack at the Uptown location near the campus of Case Western Reserve University.  Each batch of ice cream is hand crafted.  With over thirty flavors, there were many options to choose from.  We were quite satisfied with our choices.   www.mitchellshomemade.com

The Hilton at 100 Lakeside Avenue East was an excellent base for driving to these sites.  Located in the heart of downtown Cleveland, the hotel was a short walk away from the Rock and Roll Hall of Fame.  Our room had an exceptional view of the Lake Erie skyline.  The fitness center contained a nice variety of cardiovascular equipment and weights.  We enjoyed the breakfast buffet in the executive room.  The hotel staff was helpful and courteous.  www3.hilton.com

Often mocked, we learned that Cleveland was once was of the richest cities in the United States.  Well, we believe in Cleveland.  Fern and I found this city to be a very pleasant place to spend a Memorial Day weekend.  Three days was just enough time to get a feel for its gem destinations.