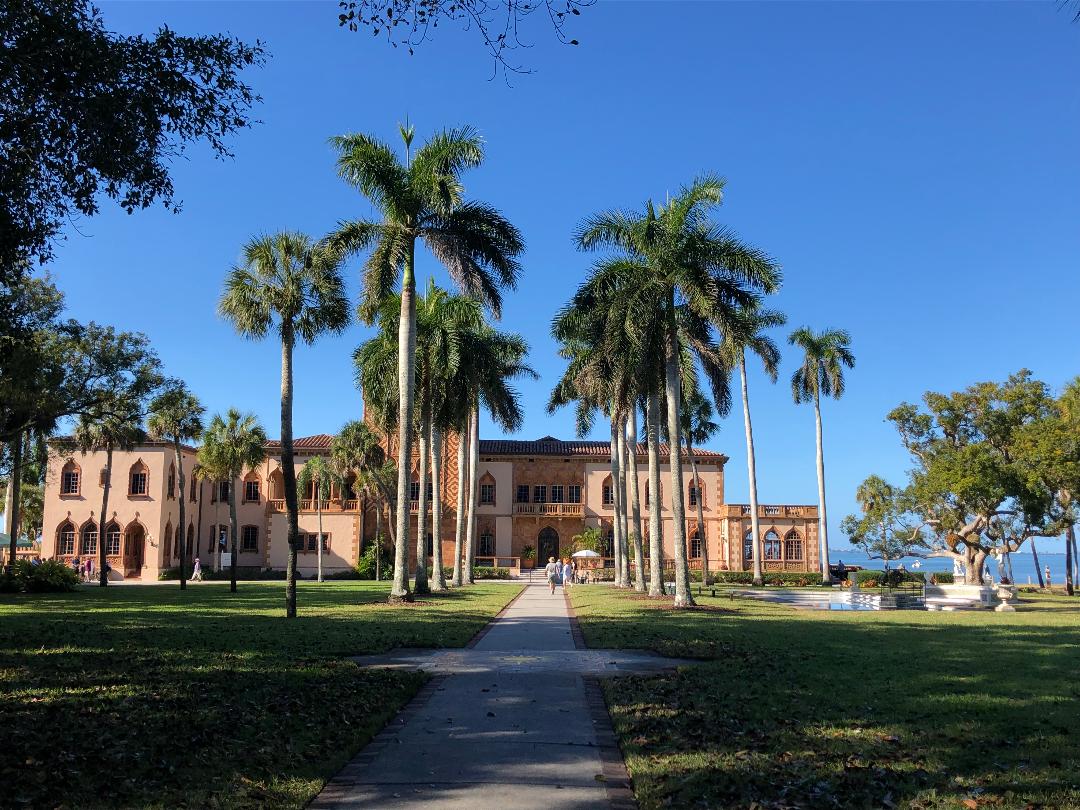 My wife Fern and I decided to begin 2019 with a five night trip to the west coast of Florida.  During our stay, we visited two sets of friends that had moved to Florida in their retirement.  The trip provided us with both beautiful beaches to enjoy and intriguing museums to explore.

From Washington National Airport, our flight to Fort Myers was in the air for only two hours.  Southwest Florida Airport is easy to navigate.  From the airport to our first stop in Naples it took about one half hour.

Residents of Naples live the good life.  This affluent area is blanketed with stylish shops and swanky restaurants.  We drove through the palm lined Fifth Avenue South Neighborhood.  This shopping district is charming, with pleasing Mediterranean-style structures featuring a mix of galleries, shops and hip restaurants.   We drove along Gulf Shore Boulevard just to see its beachfront multi-million dollar homes with views of the Gulf of Mexico.

Located on the Gulf, Naples has long earned accolades for its sixteen miles of wide alabaster beaches.  The area is irresistible for sun worshipers and shell collectors.   We stayed with our friends Bob and Ellen in their condominium within walking distance of Vanderbilt Beach.

We spent the better part of two days on Vanderbilt Beach in North Naples, enjoying the sunny and pleasant early January weather, with high temperatures over 80 degrees.  This beach has several points of access, including the public Vanderbilt Beach Park at the end of Vanderbilt Beach Road.  This beach features gorgeous powdery white sand, large turtles and intriguing sea birds.   We stayed into the evenings to watch the vivid orange  sunsets, as the sun dipped below the ocean at around 5:30 p.m.

In Naples, we had an outstanding Italian dinner at Sophia’s Ristorante Italiano at 3545 Pine Ridge Road.  The service was wonderful and the food was really good!  Our portions of eggplant parmigiana were exceptionally tasty and large enough for two meals.  The restaurant décor is very welcoming with tile and marble accents, looking very much like a restaurant set in Rome.

From Naples to our second stop Sarasota was a drive of about two hours.  The circus is an integral part of Sarasota’s past.  In 1927, John Ringling (1866-1936) selected the town for the Ringling Brothers and Barnum and Bailey Circus and made it his home.  He exerted a major influence on the growth and development of Sarasota because people came from all over the world for the circus.

The 66 acres of grounds and gardens provided us with spectacular views of Sarasota Bay, as well as various gardens.  The complex is decorated with statutes and dotted with banyan trees.  The Ringling combines the beauty of art, the spectacle of the circus and the grandeur of an historic home.   The Ringling is one of the top visitor attractions in Florida.  We spent most of one day within the Ringling.

The John and Mable Ringling Museum of Art contains twenty one galleries.  In 1925, John Ringling decided to build an art museum, both as a legacy meant to outlast his business interests and as a memorial to his wife Mable and himself.  By sharing the arts of Europe with the people of Florida, Ringling sought to educate and encourage curiosity for the wider world.  The museum opened in 1930.

The Art Museum building itself is exceptional.  John Philips designed the pink Renaissance-style palace.  The galleries enclose an inner courtyard graced with copies of iconic sculptures from Italian foundries.  The dominant copy at the back of the courtyard is a 19th century bronze cast of Michelangelo’s David (from the 16th century).

In addition to European paintings, the Art Museum contains paneled rooms purchased from the Gilded Age Astor Mansion in New York, as well as ancient and medieval objects purchased from distinguished collections.  More recently the museum has added art from Asia and the Americas, including contemporary art, in new wings.

The Ringling Circus Museum is contained in two buildings, the original Circus museum and the Tibbals learning center.  Ringling is best known as a circus impresario.  The buildings allowed us to experience the sights, sounds and showmanship of the American circus.  One of the highlights is the Howard Brothers Circus Model, the world’s largest circus model.  The 42,000 piece miniature circus includes detailed information about the circus, its wagons, animals, clowns and folding chairs under the big top.  The museum also contains displays of gilded parade wagons, costumes, restored posters and photographs.

Built in the roaring twenties, the Ringling Winter Residence, Ca d’Zan,  was used to entertain friends and family.  Politicians, business associates and celebrities came to Ca d’Zan for lavish parties.  The 45 minute tour of this 56-room historic home is included in the upgraded admission fee of $45.  The tour includes two of the terra cotta mansion’s five floors.  Acclaimed New York architect Dwight James Baum created the mansion in the Venetian Gothic style.  Much of the furniture was purchased from New York auctions.  Highlights included tapestries, the ballroom with its ceiling depicting whimsical dancing couples from cultures around the world and the court with an 1892 Steinway piano and a beautiful crystal chandelier originally hung in New York’s Waldorf-Astoria hotel.  Photography is not permitted inside Ca d’Zan.  There are two slightly different tours available for the upgraded fee.

We had an exceptionally tasty lunch at the Muse restaurant, located within the McKay Visitors Pavilion.  The Muse provides upscale local cuisine with an international flavor.  Our salmon came from the Faroe Islands off of Denmark!

In Sarasota, we stopped for dinner in St. Armands Circle and had a very tasty pizza with homemade dough from the pizza oven and salads with special dressings at Venezia Italian Restaurant, located at 373 St. Armands Circle.  The bright café offers classic Italian dishes and it was very pleasant to sit outside on the circle’s sidewalk.  We enjoyed our discussion with our waiter from Albania.   www.venezia-1966.com.

We spent some time walking around the quaint St. Armands Neighborhood.  Nested between the Sarasota Bay and the Gulf of Mexico, St. Armands was a fun destination to relax and unwind by walking around and dining.  St. Armands is an island within the Sarasota Bay.  The Circle is a roundabout with restaurants, fine art galleries and boutique stores.  Of particular interest to us, the Circle includes a series of thirty Italian statues purchased by John Ringling and one of Ringling himself, as well as plaques honoring celebrated circus performers, such as P.T. Barnum!

In Sarasota, we stayed at the Homewood Suites at 3470 Fruitville Road.  The newly renovated hotel was a short distance from downtown and the beaches.  The lodging rooms were very spacious and the reasonable rate included an extensive breakfast and access to a small but adequate fitness center.  www.homewoodsuites3.hilton.com.

We stopped to see the sunset at Siesta Key Beach on the Gulf of Mexico.  On this beach, the sand is sugar-fine quartz, so it is soft and cool on the feet!  A short walk from the beach is a village of dining and shops.  Parking is free and plentiful.  Many experts have ranked Siesta Key as the top beach in the United States.  The beach is so wide and long that the crowds are not quite as noticeable.    www.visitsarasota.com.

On the way out of Sarasota, we stopped to see our friends who moved to Lakewood Ranch.  On the border of Sarasota and Bradenton, Lakewood Ranch is a huge master planned community.  The community includes golf courses, clubs, shops and trails.  https://lakewoodranch.com.

From Sarasota to Clearwater Beach is a drive of about one hour.  In Clearwater Beach, we were right on the beach at the Hilton on 400 Mandalay Avenue.  The broad white sand beach is nestled along the shores of the Gulf of Mexico and our room had a nice view of the Gulf.  The Hilton offered daily beach-front yoga within the resort fee, as well as a fitness center and an extensive breakfast buffet.

The soft white sand and pleasant temperatures of Clearwater Beach draw visitors year round.  The beach sits on a barrier island and has frequently been ranked among the top beaches in the United States.  We spent the better part of one day relaxing on the beach.  We had an informal dinner at the Salad Shop.   Located at 474 Poinsettia, the café is a short walk from the beach.  The salads are large, the ingredients are fresh and the staff was very friendly.  www.thesaladshopfl.com.

Our trip from Clearwater Beach to St. Petersburg took less than one half hour.  Our purpose of this trip was to say “Hello Dali!”

Salvador Dali was one of the most complex and controversial figures of the 20th century.  He is one of the most celebrated artists of all time.  Not satisfied with convention, he boldly explored a variety of media, creating a vast collection of work.   The museum features paintings, sculptures, photographs and prints.  It is the largest Dali collection outside Europe.  The heart of the collection came from the collection of Reynolds and Eleanor Morse, originally from Cleveland, Ohio.  The Morses were both friends and patrons of Dali.

The Dali Museum has a permanent collection with art spanning Dali’s career, from his student pieces through works of surrealism and his later career creations.  The collection is delightful and includes some of Dali’s finest works.  With over 2000 pieces dating from 1914 to 1980, the Dali Museum is one of the largest collections of his works.  The museum opened in 2011 in its current location.  The museum is currently featuring a retrospective comparing Dali with Magritte, two of the world’s most celebrated Surrealists.  Ironically we saw many of the works of Rene Magritte during our recent trip to Brussels, Belgium.  The very detailed one-hour docent led tour is included within the admission price.

Outside the museum, on the St. Petersburg waterfront, the museum’s Avant-garden has a number of whimsical features, including a sculpted Dali mustache.  https://thedali.org.

From St. Petersburg, we headed back to Fort Myers.  Reflecting during our outgoing plane trip home, Fern and I concluded that the West Coast of Florida is a great destination for both relaxation on the top ranked beaches and culture within its museums.