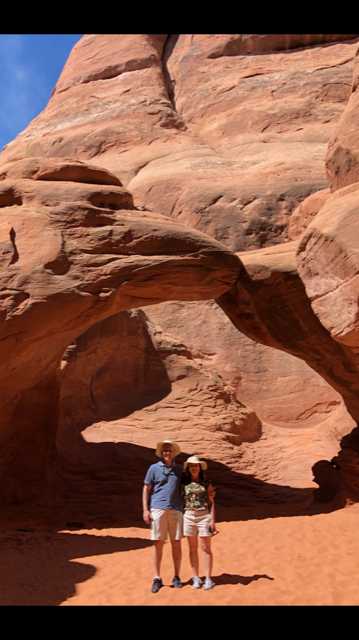 My wife Fern and I spent three days exploring the dramatic canyons and colorful natural arches of the south east end of Utah and the Great Salt Lake in the north.  To break up the drive, we spent several hours visiting the Brigham Young University campus in Provo.  After spending several days in Salt Lake City, these outdoor adventures provided us with a super contrast and a great trip.

The Great Salt Lake is the largest natural lake west of the Mississippi River.  On average, the lake is 75 miles long by 28 miles wide, covering 1700 square miles.  Because the lake has no outlet, high concentrations of salt and minerals are left behind.  Salinity at 15 to 25 percent is too high to support fish, but migratory birds have food sources with the algae, shrimp and flies in the lake.

Opened to the public as a state park in 1978, Great Salt Lake Park provided us with beautiful views of the lake, nearby Antelope Island State Park and Black Rock.  This State Park provides the closest public viewpoints of the lake to Salt Lake City.  The lake is a popular destination for bird watching, as it is a major stop for migratory birds.

Sixteen miles west of Salt Lake City, this small state park provides access to the south shore of the lake.  The cost is $3 per vehicle.  The park has a newly built visitor center and provides beach access at Silver Sands beach.  At the park, we observed stunning views of the snowcapped mountains above the blue lake.  Water trapped in open dikes near the park leaves inches of almost pure white salt that is harvested for commercial purposes.   https://stateparks.utah.gov/parks/great-salt-lake.

About one hour from Salt Lake City, the park charges $10 per vehicle for entry.  This 28,000 acre state park is the largest island within the Great Salt Lake.  During our stay, we saw four members of the free roaming American bison herd grazing, many birds and one lone pronghorn antelope running at a very fast pace on the rangelands.   The bison herd contains about 550 to 700 animals.  The pronghorn antelope are native to Utah.

Antelope Island is 15 miles long and 4.5 miles across at its widest point.  We stopped for information at the visitor center where we learned that the Great Salt Lake is one of the saltiest bodies of water on earth.  Only the Dead Sea in Israel and Jordan has a higher saline content.  Unlike the Dead Sea, we did not try to float in the Great Salt Lake because there were no facilities here to change or wash up afterwards.  The island was opened as a state park in 1981.  The park provided us with dramatic views of the lake and Wasatch Mountains.  https://stateparks.utah.gov/parks/antelope-island.

Moab and the National Parks of Southeast Utah

Tucked into a valley at the foot of red-hued cliffs and the La Sal Mountains, the town is a major departure point for excursions into Arches and Canyonlands National Parks.  The town has an elevation of 4000 feet and a population of about 5000, excluding tourists!  This red rock wonderland is also on the Colorado River.  Since neither Arches nor Canyonlands National Parks has either lodges or restaurants, Moab is the best location to stay and dine when touring either park.

We stayed in Moab for two nights.  The cute main street features many hotels, stores and restaurants.  In particular, we enjoyed several art galleries featuring photos and paintings of the area’s natural beauty.  We had an excellent Italian dinner at Pasta Jay’s at 4 South Main Street.  We ordered baked eggplant parmigiana in a tasty red marinara sauce with a side of pasta and crusty bread.  The portions were large enough to provide us with a second meal.

Just five miles from Moab, this rugged area contains the largest number of natural stone arches in the world.  The park was established in 1964.  Along with about 2000 arches, the park contains many red rock canyons and balancing rocks.  The arches range from 3 to 300 feet wide openings.   The formations are made of salmon or buff colored sandstone.  The cost for admission is $30 per vehicle.  The park attracts about one million visitors per year.

The rangers at the visitor’s center provided us with several options for hikes and sites.  The sites are accessed along a paved road that ends 18 miles from the visitor center.  Close to the entrance, the Park Avenue viewpoint provided us with an easy hike through a red rock canyon whose walls resemble a big city skyline.  We then drove to the Windows section, where there are a series of arches, including two large arches that look like windows.  These two arches are reached by a gentle climb up a gravel trail.

Later on we hiked to the famous Delicate Arch viewpoint which you can view an arch with an opening of nearly 45 feet.  Set amid cliffs and sheetrock domes, this free-standing arch can easily be seen from several distant viewpoints.  At the recommendation of the ranger, we then drove to the secluded Sand Dune Arch which is tucked among sandstone fins and is not seen from the park’s road.  After a short walk through deep desert sand, we arrive at this particular arch.

There is more to see in the park than the fabulous arches.  We stopped to see one of the many huge balanced rocks which are fragile, picturesque rock formations where rocks appear to be balanced on top of each other.  The big iconic Balanced Rock in the middle of the park is 128 feet tall.  Also near the entrance to the park, there is an overlook of the Moab Fault, created by a dramatic break in the earth about six million years ago.

Due to intense sun, it is essential to bring water into the park, along with a hat and sunscreen.  In June the park was somewhat crowded, but the crowds were only noticeable as we waited for entry into the park and on a few of the trails.  We spent approximately one day at the park and felt that this time provided us with a good overview of its attractions.   https://www.nps.gov/arch/index.htm.

Also established in 1964, this national park preserves a wilderness of rock at the heart of the Colorado Plateau.  The entire park covers 527 square miles.  Canyonlands encompasses deeply eroded canyons interspersed with a variety of arches and unusual rock formations.  The entire park preserves 337,598 acres in the heart of southeast Utah’s high desert.  The cost for entry is $30 per vehicle.

This national park is divided by the confluence of the Colorado and Green Rivers.  As a result, Canyonlands has distinct sections which are not directly connected to each another.  We spent our time in the Island in the Sky district, which is about a 30 minute drive from Moab on paved roads.  This district has its own visitor center where the ranger provided us with highlights to see in this section over a half day period.

At Islands in the Sky, vegetation is sparse.  This district is a huge level mesa where dramatic canyons at towering depths can be viewed.  The mesa rests on sheer sandstone cliffs over 1000 feet above the surrounding terrain.  We spent much of our time driving from one “grand” canyon to another!

The Islands in the Sky district is the most northern of the districts and the most visited because of its proximity to Moab and its paved roads.  The entire mesa is accessible through a 34 miles round trip scenic drive.

We first hiked to Mesa Arch where a half mile hike leads to a cliff edge arch with stunning views toward the La Sal Mountains.  We then drove to the 6000 feet high Green River Overlook which provides amazing views as the Green River meanders below.  Fern and I thought that the most dramatic viewpoint was at Grand View where there are panoramic views above the canyons at the elevation of 6080 feet.

The crowds at Canyonlands were much smaller than at Arches National Park.  Again at Canyonlands the sun is intense due to minimal shade, so water, sunscreen and hats are musts.  http://www.nps.gov.

Provo is the third biggest city in Utah, with a population of about 113,000 residents.  Fern and I made a stop there on the way back to Salt Lake City from the two national parks.  Provo is about one hour south of Salt Lake City.  This scenic city is at an elevation of over 4500 feet, in the shadow of the Provo River, and sits beneath the Mount Timpanogos Mountains and the Wasatch Ridge.

At the base of the Wasatch Mountains, the BYU campus hosts one of the largest church-related universities.  The school is run by the Church of Jesus Christ of Latter Day Saints.  Its 634 acre campus is dominated by the 112 foot centennial carillon bell tower.  Fern and I wandered around the campus for several hours.

We particularly enjoyed seeing the sculpture garden outside the art museum and a very large pendulum in the science building.  Within the Joseph Smith building we viewed various displays on the Church of Latter Days Saints, including a replica of the golden plates found by Smith.  Outside the Smith building, a very large sculpted wall features Smith, several families and a quote inspiring the teaching of the religious doctrines of the church.  The campus also includes a planetarium and a museum focused on dinosaurs.

Just east of the school is Y Mountain with the hillside letter Y built in rock as an insignia for BYU.  The large block Y can be hiked and is seen from many locations in Provo.

Located on the northeast corner of the BYU campus on North Campus Drive, this museum was the highlight of our BYU visit.  There is no admission charge.  The art museum has galleries of European Art and local artists, including temporary exhibits.

We spent some time viewing the permanent collection entitled “Becoming America” which features American Art (e.g., paintings, prints and sculptures).  Artworks are grouped based on themes, with a focus on America’s many frontiers – cultural, ideological and physical.  One of the more interesting pieces that we were surprised to find here was called Immigrants to New York, Jewish Refugees by Minerva Teichert.  This large oil campus was painted in 1938.  This ode to America’s immigrants was inspired by the artist’s son’s experiences while serving as a missionary in Germany personally witnessing the abuse of Jews.  In this painting, the ship of Jewish immigrants enters New York harbor and they see the modern New York skyline and the towering Statue of Liberty.   We found some irony in this work focused on Jewish immigration being house in a museum sponsored by the Church of Latter Day Saints.

Upon our return to Salt Lake City, Fern and I concluded that the outdoor sites of Utah are amongst the most spectacular in the United States.  This trip gave us a slice of wild America with pristine natural beauty untrammeled by urbanization and civilization.