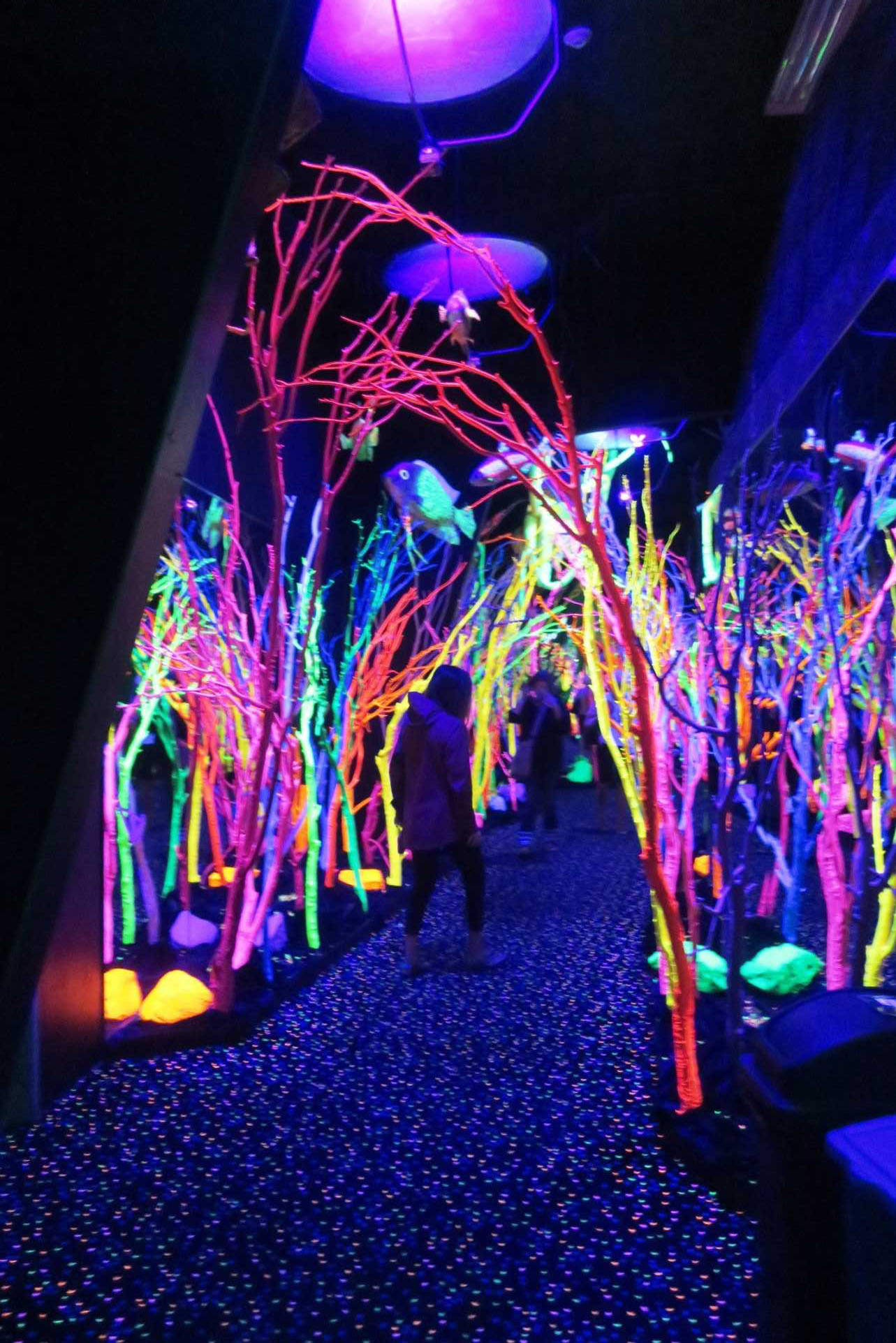 A travel writer’s worst nightmare? Being at a loss for words to describe something. And so it is with Meow Wolf, an immersive interactive art installation and technological wonderland with unending surprises at every turn in Santa Fe, New Mexico. Oh sure, it’s magical, mind-boggling, awesome, inspirational but no mere words can capture the experience.

Prior to entry, you are encouraged “to do things.” And indeed there’s lots to do. Also be careful of flashing lights, dark spaces, uneven terrain; Watch your step, Watch your head, Watch your mind. You are advised not to run, eat or gossip; and incidentally, to stop the Apocalypse. What else is there to know?

As you walk in, around, about and through a house, there is supposedly a sci-fi mystery about what occurred there – with clues ostensibly placed throughout – but I quickly gave up on even trying to imagine what or where they could be. There are apparently 100 hours of narrative content superimposed upon 70+ rooms of inspired idiocy. Way beyond my pay grade. Besides the experience itself is one big distraction from focusing on anything but trying to figure out just where you are, how you got there, what you’re actually seeing and what there is next.

To say there are secret passages is like saying alphabet soup has letters in it. Eventually climbing through a fireplace on your knees or walking into a refrigerator or sliding down a dryer begins to feel normal. Then those portals lead to other rooms, ramps, caverns, hallways, stairways, each one of which houses its own mesmerizing series of shapes, sounds, games, statues – perhaps some psychedelic monsters, multi-colored puppets, optical illusions, but mostly huge unidentifiable objects that appear to have no particular purpose other than to pique one’s imagination and cause one’s head to shake repeatedly in disbelief. Or maybe it was just me.

It’s like being shot into a living, breathing kaleidoscope, the sensory overload akin to 2001: A Space Odyssey combined with Fantasia on steroids – and drugs. Sure, it’s a multi-dimensional art gallery because this is, of course, Santa Fe, but the creative chaos is interspersed with being ensconced within a human video game, jungle gym and an other-worldly dimension that defies any normal concept of reality.

Did I mention the multiple theme rooms with their bright lights, colorful designs, mystical music? Of course, the treehouse alone is its own adventure. Occasionally voices emerge, but who cares? I was too busy playing the dinosaur bones and producing a sound and light show before moving on to the laser harp room. Don’t even ask. Then on to an invitation to visit multiple fictional destinations or view a peephole containing dioramas of weird – might I say macabre – objects. There were inexplicable videos that to some level of intelligence beyond mine may have meant something – or not.

What? An arcade room? Something must be wrong. It looks normal. Okay, not so much. The sign saying the games are free is perched right above the token machine. Onto a graffiti-engraved wall: “How is one to know one’s mind when one’s mind is all one has to know it by” pretty much sums up what I’m feeling at the time. An extensive garden of wide-ranging floral arrangements attracts until one realizes it’s just a reflection of single plants magnified multiple times within a mirrored room. More head-shaking.

At  the risk of repeating myself, none of these words even begins to do Meow Wolf justice. It just might be the 8th Wonder of the World – and demands a visit so that you too can shake your head, roll your eyes, and laugh knowingly when someone asks you to describe it.

If You Go:  The best idea is to buy your tickets online. This allows you to choose your date and time. Don’t even think about going for the 10 a.m. opening; the lines are too long. By later in the afternoon, you should be able to walk right in. You may or may not ever come out…

Meow Wolf is open until 8 p.m. and closed Tuesdays: Tickets are $29 for adults; $21 for children. For more information, visit https://meowwolf.com.