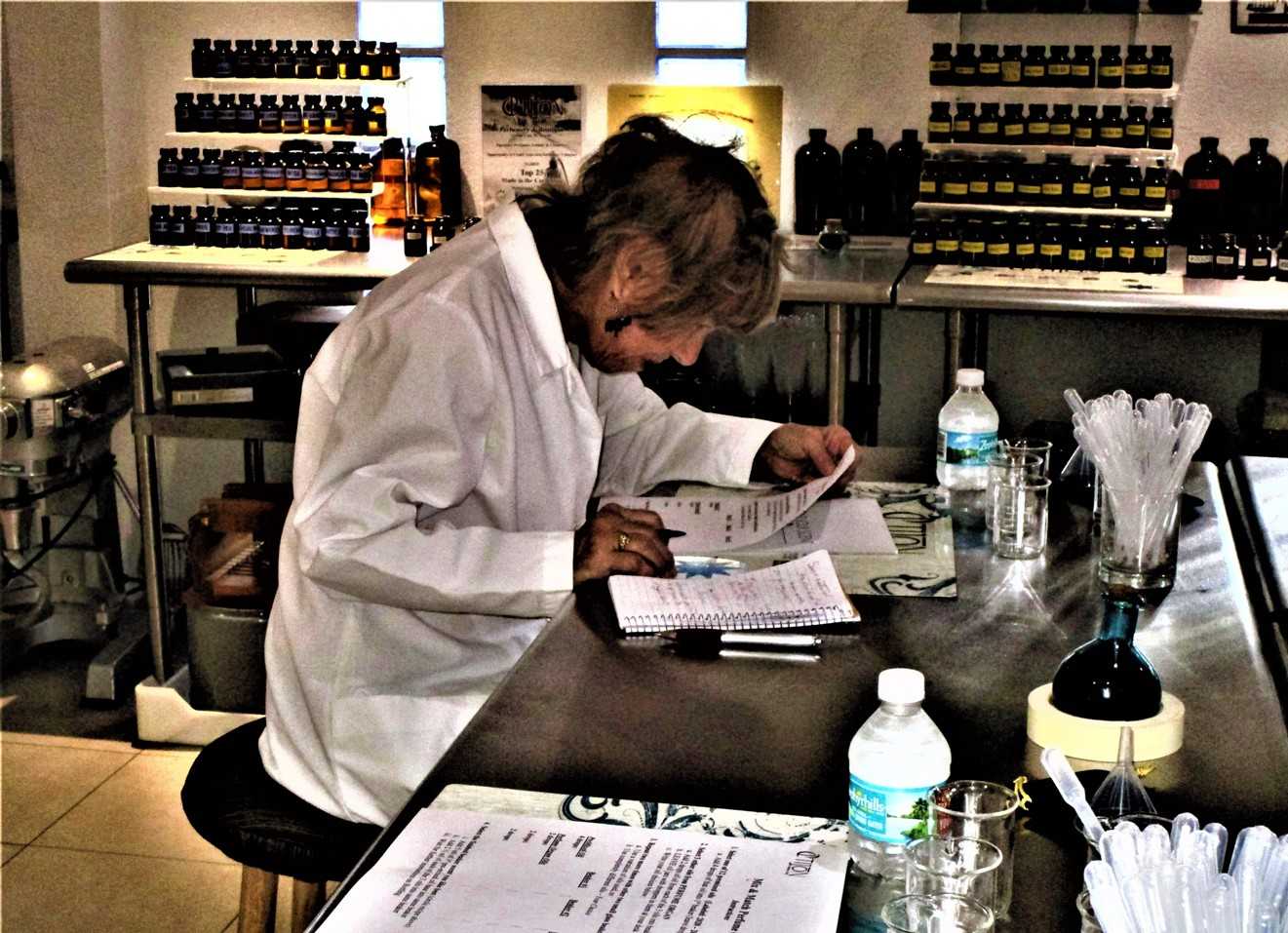 So there I was in my white lab coat examining the 40 different vials and trying to determine which combinations to mix to get the best outcome. Admittedly, I wasn’t enacting some important scientific discovery or creating a medical breakthrough but it felt almost that significant. What if I screwed up, made ridiculous choices as to the most effective ingredients and came away with an awful smelling product. Yup, I was making perfume at the Tijon Parfumerie & Boutique on the French side (obviously!) of the Caribbean island of St. Martin. The other half – Sint Maarten – is the Dutch side and the two together form the smallest land mass in the whole world to be shared by two different countries (France and the Netherlands). Still the cultures are very different, but more on that later.

First some background. The Parfumerie itself is a study in sensory overload; a cologne colony. There are over 300 individual oils to choose from. Of course, a little history is imparted before you’re let loose to create your own personal perfume. As an amateur “nose” – someone who uses oils to create new fragrances – you learn that heat, humidity and sunlight are the enemies of perfumes. There are natural essential oils and man-made fragrances. You must combine top notes, middle notes and base notes to fashion “an accord” that will constitute a pleasing perfume.

Becoming a chemist is no easy task. There are a whole series of intricate steps to follow in the search for perfection. First, you choose three bottles from a series of 12 pre-mixed oils sporting such descriptions as “warm, exotic, rich earthy base,” tropical, citrus blend,” or a “soft, floral base.” Then you select nine other oils – for three perfume creations — from a selection of a mere 300. I randomly – because really, how else can you do it? – chose Beach, Cashmere, Grass, April Rain, Vanilla Oak, Sunflower, Amber Musk, Aqua Spa and Rose. After a while, I didn’t know whether to eat the flavors, bathe in them or plant them in a garden…

And then using beakers and droppers – because yes, this IS a lab experiment – you yourself choose how to combine the different options of all the fragrances into three potential bottles of perfume. Once you determine which of the final prospects you like the best, you add a number of other chemical properties to solidify the perfume-making process so that your own personal perfume came be beautifully bottled and placed in a classy cloth carrying case. And of course, it all ends with a champagne toast because, remember, you’re still in France. Voila! You are a perfume-maker. And every time you use the perfume — which by the way, you have also named so that it is intrinsically yours – you will remember St. Martin.

But will you remember Sint Maarten? Of course, thanks to the Amsterdam Cheese and Liquor Store, a very fine representative of all things Netherlands where the number of cheeses almost rivals the variety of fragrances.

Souvenirs from Dutch shoe key rings to windmill earrings; Dutch cookies and candies to soft clog slippers; tulip candle holders to Delph Christmas ornaments, and wooden shoes, large and small, in every iteration! And we haven’t even gotten to the cheese, yet. Fifty varieties of cheese, all imported from the Netherlands – as well as every kind of cheese-related item from slicers and skewers to cutting boards and serving dishes.

According to owner Etienne Rogers, the Dutch cheese market is huge and little known outside the Netherlands – and now Sint Maarten, which boasts little of Dutch origin despite its heritage. Etienne is happy to offer not only tastings but pairings with its select liquors as well. He also offers knowledge – which cheeses with which rums with which crackers.

I am in Amsterdam, immersed in Dutch memorabilia. There is so much diversity but everything says Netherlands. And as startling as the vast varieties of perfumes at the Parfumerie , so it is with these cheeses. Forget about your cheddar and your Camembert – there’s coconut, pepper, pumpkin, truffle, jalapeño, cumin and asparagus – to name a few. Even the colors are surprising. Green, black, brown, orange for starters. Still Etienne defends the Gouda. He says that people come in and say they don’t like Gouda. His response: “You don’t like American Gouda; Dutch Gouda you will love.”

So there’s French culture and Dutch culture but the island itself is Caribbean and what better way to celebrate that than with rum (or rhum, as it is locally known).

And since I wasn’t yet sufficiently intimidated by an over-dose of oils or cheeses, it was on to the family-owned Topper’s Rhum Distillery where there are as many different flavors of rum as there had been fragrances and wooden shoes. And then there’s the rum cake! But before we got to that, there was a lot to learn about the craft itself. A small price to pay.

Topper’s has been winning medals in international rum tasting competitions for years – quite a testament to a liquor whose origins began in Melanie Daboul’s own kitchen. She went from serving family and friends to making over 100 flavors of rum in a few short years. And a tour of the factory takes you on a rum adventure spanning more than 20 different samples ranging from the recognizable to the exotic – all from natural ingredients. From your basic coconut and spiced to white chocolate raspberry and banana vanilla cinnamon. And oh yes, of course, there’s also your bacon maple syrup and buttered popcorn varieties.

You can drink as much or as little as you want – no judgment. Eventually I just stopped taking notes so just know that the 17 rums I tasted were really, really good. Okay, maybe a little judgment…  But admittedly, at this point, my eyes were glazing over on the history of rum-making.

And if you need some diversion in between tastes, there are always the t-shirts: “Girls Just Want to Have Rum,” “All for Rum, Rum for All.” “I’m on a rum diet – I’ve already lost 3 days.” This is a very hands-on operation from brewing to bottling. Nothing is automated. And did I mention the rum cake?

So  two chemists: John at the Parfumerie, a cultural product of the French side of the island, and Melanie at the rum factory, a very Caribbean creation – both inventing hundreds of products from scratch. Plus the hundreds of products directly imported from the Netherlands. Cultural overload. But the island has even more to offer.

Its claim to be The Friendliest Island deserves a truth-in-advertising award. Literally three times when we stopped to ask directions (a common occurrence as road signs are basically non-existent), the guy got into the car and took us to our destination. And not once did we get robbed or even asked for a tip, a de rigueur practice in many other Caribbean islands.

Indeed the island abounds in distinctive cultures — and oh yes, there are also beautiful beaches! For more information, visit st-martin.org and vacationstmaarten.com