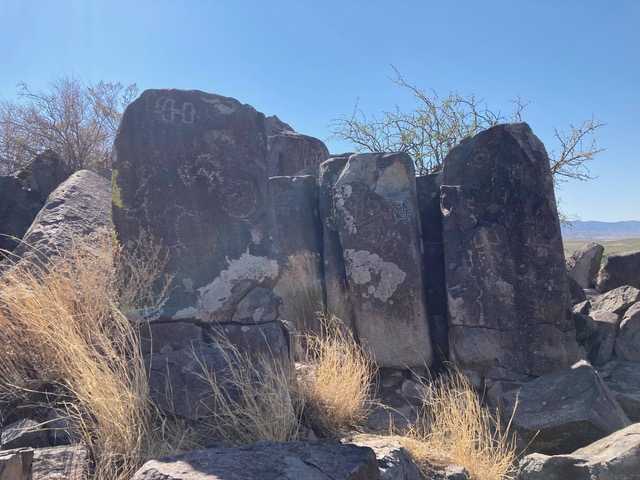 By Bonnie and Bill Neely

Driving our RV from home in South Carolina to see our family in Los Angeles, California, is always an ambitious trip. Spending as much time outdoors as possible and avoiding crowds is quite easy in the beautiful campgrounds across the USA. RV travel and tent camping has increased 1,000 percent in the last year, and we are grateful for all the people who run these wonderful State and National Parks and private campgrounds. Even on the busiest of weekends in this summer of 2021 when most of the campgrounds have been fully booked, we have found them pristine clean with friendly staff. People who love the out-of-doors seem to be willing to follow safety rules of wearing masks indoors and keeping safe distances from all others. Family groups camp near each other and stay together in most instances. We never found noisy people after quiet time at 10 p.m.

We chose to avoid major Interstate highways because of heavy traffic and fewer interesting sights. Instead, we frequently drove the “blue highways” (old two and four lane asphalt highways through small towns) because we find it more relaxing with interesting roadside scenery and great little towns or wayside parks at which to take rest breaks. Because we have driven across the USA so many times to see family, we try to vary our routes to stop and explore places we have not seen before. We drove through Ruidoso, New Mexico, a favorite area for mountain tourism year-round. Many lovely motels, lodges, RV Parks and Campgrounds are there.

Alamogordo, New Mexico, was one of those special destinations selected to spend several nights this summer. Our stay was at the Alamogordo White Sands KOA, an excellent campground. Because extreme heat wave attacked the world in early June 2021, we made an early morning drive about seventeen miles to Three Rivers Petroglyph Site for our self-guided walking tour. This high desert climate has dry air, so different from muggy 100 plus degrees we had experienced coming through the Deep South states, so hiking in early morning at this high and dry desert was pleasant, although no one recommends hiking near here between noon and about five p.m. when dangerously high temperatures are normal. The site is managed by the Bureau of Land Management and open year-round. There are six shelters with barbecue grills, tables, trash cans, a few RV sites with water and electric hook-ups. In some places BLM campsites can be reserved ahead of time, but most are first-come, first-serve. Some are free and some have a nominal fee. We have found some little known but fascinating places in BLM locations through the years.

Instead of going on the trail to the partially excavated ancient village of the Jornada Mogollon people, who lived here from about 200 – 1450 AD, we got the self-guided tour brochure and proceeded to have a fun “Easter egg hunt” in June; however, we were not looking for hidden eggs but for something far more fascinating and unusual. We were climbing the rugged, rocky trail among many boulders searching for as many as we could find of the 21,400 ancient petroglyphs, which are pictures carved into these local boulders by the Jornada Mogollon prehistoric Native Americans, who lived in this area. We had recently spent time in Roswell, New Mexico, where a spaceship crashed in 1947, and we had been exposed to lots of information and enthusiasm about spaceships and aliens. With that in mind, we especially searched for ancient carvings that perhaps depicted space vehicles and ancient alien beings. And we were not disappointed, at least not with our own interpretation of several pictures that looked to us like flying saucers and even an airplane in the sky and some really weird-looking humanoid shapes. However, most of the petroglyphs depicted recognizable animals including sheep, birds, human faces, arrows, corn, and rain. The most frequent carved rock pictures were of a circle with a cross in the middle and little dots around the circle perimeter, the meaning of which archeologists have not been able to interpret.

The darkened surface of the rock is called patina, caused by the oxidation of the minerals inside the rock. Some of the petroglyphs appeared to be simply scratched faintly with a sharp tool into the patina of the rock. It seemed a bit like graffiti of children in ancient times. But the more vivid rock pictures were carefully chiseled into the patina by the ancient artists using two rocks as tools in the fashion of a hammer and chisel to remove a deeper layer of the patina, exposing the white rock beneath.

The basaltic rock where the petroglyphs are found is at about 5,000 feet elevation overlooking the Tularosa Basin with the backdrop of San Andres Mountains to the west and views of the vast White Sands gypsum fields in the south, and to the north a great contrast of the black lava flow where Sierra Blanca rises 12,003 feet high. To the east we could see the location of the Mescalero Apache Indian Reservation.

Although the three rivers are dry now, the region is really worth and a petroglyph hunt. Sometimes the unique store owned by Native People is open at the entrance, where we found hand-made crafts and fascinating souvenirs to entice our friends to ask about our visit here.