In Savannah, GA, you are steeped in history, maybe even overwhelmed by the periods you could study there, but no matter what your skin color, don’t miss visiting the First African Baptist Church in Franklin Square, where the oldest continuous black Baptist congregation in North America worships. This church, now with a membership of about 500, was built by slaves on this location in 1859 and is listed on the National Register of Historic Places.

In 1775 the church was started by Rev. George Leile, a slave who was granted permission to preach on various plantations, and even some whites enjoyed listening. He was ordained the first black Baptist minister in North America and in 1777 obtained his freedom. He began the First African Baptist Church on Keokee farms in the Brampton Barn wtih six members, which quickly grew to thirty. He led his growing congregation until 1782 when he disappeared or was killed in the Revolutionary War. First African Baptist Church
Savannah, GA

By 1855, under the leadership of the Reverend Andrew Cox Marshall, the congregation had grown to over 3,000 members who decided to build a new building themselves. Slaves were not allowed to own property but they raised $1,500 to purchase the land, which their masters held in trust for them. “It is amazing to think they could have used this money to free themselves or family members, but they chose instead to build this building to the glory of God to stand for future generations,” said A. K. Roberts, the deacon who led us on the tour of the amazing sanctuary. The original building was completed in 1859 under direction of the Reverend William J. Campbell.

The slaves who formed the congregation at that time came from many surrounding plantations and shared tasks, many traveling long distances after their plantation labor was completed each day. Walking the long way to town was exhausting, so they often used the River as their highway. They used little boats to ride the tide in, worked all day or all night, and rode the tide out again. This was both exhausting and dangerous.

Each brick was made by hand by the slaves near the Savannah River and carried by the women to the building site. It is said that the man who placed the first brick also laid the last brick upon completion of the building. Although now covered by stucco, the church walls are four bricks thick. When the slaves were in Beaufort to build they worshipped in Prayer Houses which grew up all around the city to service these people. Other churches grew out of these . The sanctuary, which holds 1600 people, is resplendent with the rich colors of authentic Tiffany stained glass windows, with glass portraits of the African-American ministers from earliest years. These windows and the pipe organ were added in the late 1800’s. The wood floors are original. 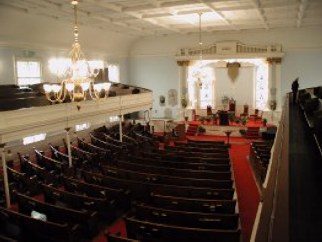 Climbing the stairs to the balcony was a poignant moment when we realized who had climbed these before us. In the balcony we found wood pews with markings of the nine African tribes represented in the original congregation, and surprisingly some Arabic calligraphy from the Koran inscribed on the pews’ end panels. Because the balconies of white churches of the times were used only by slaves, we were surprised to find a balcony in this sanctuary, but balconies were part of the normal church styles of the period. Today this building is rated excellent in architecture.

Savannah has had a tunnel system since its earliest days. Many historians believe possibly the British soldiers built and certainly used it. It was used by pirates in the early days too. When this property was purchased by the original black congregation they were well aware that an entrance to the tunnel system was on this site. It may or may not have been foreseen that it could later lead some of the slaves to freedom. The basement has a false floor with airholes and was built over a tunnnel entrance, as were other buildings in town.

Sometimes slaves wishing to escape to freedom came to services in the sanctuary, were given food, and then slipped into the tunnel to hide until it was safe to escape to the River, where they either went upriver by boat or crossed over and hid in barns in South Carolina until their masters stopped looking for them and they made their way to freedom in the North, via the “underground railway system.” Visitors can see this floor marked by airholes today, although the tunnels have been stopped up.

The present congregation is in a campaign to raise $2.2 million dollars for renovation of the building. When it was built, the church had a steeple almost 100 feet above the roof, but a hurricane in the 1890’s knocked it off. Plans include adding a similar steeple. The stucco will be removed to expose the original brick work. Donations for this restoration will be gratefully accepted. You can send them to: