Knoxville was a fortified outpost, capital of the Southwest Territory and later of the state of Tennessee. It is named after Henry Knox who was President George Washington’s War Secretary. The city furnished the political and intellectual leadership for Unionist East Tennessee when the region struggled to remain loyal to the United States at the time of the Civil War. The contending armies made this strategic railroad center a battlefield during the sectional conflict. My first question was, “Why is Tennessee known as the Volunteer State?” I was told that General Andrew Jackson led 1,500 Tennessee volunteer soldiers into battle during the War of 1812. During the Mexican-American War Congress asked Tennessee for 2,800 soldiers, and 30,000 men “volunteered!”

In the twentieth century, the development of the Great Smoky Mountains National Park (less than an hour away), the Tennessee Valley Authority and the atomic complex at nearby Oak Ridge (20 miles south), together with the phenomenal growth of the University of Tennessee (27,000 students), have given the city a new dimension. Knoxville has a population of 175,000 while Knox County total is around 400,000. I am told that the city is less than an hour’s drive from half the population of the US. An opportunity to attend a Tennessee football game and visit the Women’s Basketball Hall of Fame was too much for a sports fan to resist. 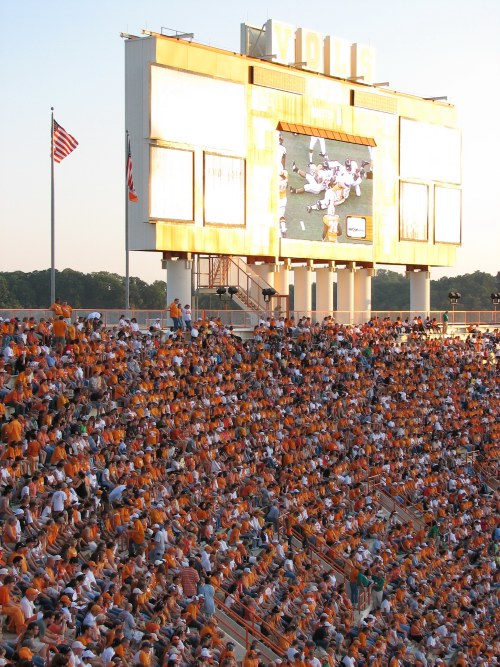 Let’s start with Neyland Stadium and almost 105,000 fans, seemingly all wearing Orange. Built in 1921 it has been renovated 16 times with the latest addition being 78 executive suites for the school’s larger donors. I loved the video replay scoreboard which is 44 X 28 feet and made it easy to watch the game from any seat. Is there a better view in college football? One side is the Tennessee River, where fans arrive by boat and tailgating begins in the early morning. Rising above it all are the Smoky Mountains. As an aside, Tennessee won the game.

Continuing the sports theme but switching to basketball, Pat Summitt, the coach of the Lady Vols basketball team, has won over 900 games, the most victories for any collegiate men’s or women’s coach. Also her teams have won six NCAA titles. The Women’s Basketball Hall of Fame was built in 1999 and celebrates all aspects of woman’s basketball from professional to high school. It is easy to spot because the world’s largest basketball sits on its roof. I stayed next door at the Marriott during my weekend in town.

And the Jeopardy question is: When and where was the last World’s Fair that made money? The answer is Knoxville and the year was 1982. Another question could be: What is the smallest city to host a World’s Fair, and you get the same answer- Knoxville. Actually, the last World’s Fair held was in 1984 in New Orleans but it lost money. I had forgotten about World’s Fairs until we visited the recently reopened Sunsphere and rode to the 26th floor observation deck. This served as the center of the World’s Fair site which is now a park and sits next to the new Convention Center. The park is very kid- friendly with fountains and lots of open space. While we were there a wedding was taking place.

Continuing with the outdoor theme we visited Market Square, which was the site of the city’s original market area founded in 1854. It has been revitalized with shops and restaurants. Every Thursday from April to June there are free outdoor concerts (Sundown in the City) on the band shell at Market Square as well as free outdoor movies on Thursday nights during the fall. Knoxville has several trolley lines that crisscross the downtown area and are free. The Waterfront at Volunteer Landing & Marina is a one mile promenade along the Tennessee River with fountains and places to jog or just rest. The Star of Knoxville is a stern-wheel paddleboat headquartered there; nearby is the Three Rivers Rambler, a vintage steam engine train that makes 90 minute excursions. I did not know that Alex Haley adopted East Tennessee as his home after writing “Roots,” but I did visit his 13 foot bronze statue, which is the largest sculpture of an African-American citizen in the US. 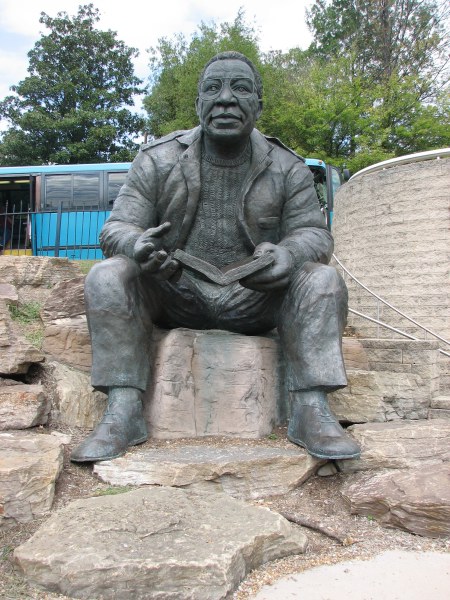 Moving indoors in the downtown area our group spent time at the Tennessee Theatre and listened to the beautiful vintage Wurlitzer organ still in use. It is the Official State Theatre of Tennessee and one of the few great movie palaces from the Roaring 20’s still in operation. Performances include music, films, dance and drama. Across the street is the East Tennessee History Center built in 1874. This regional history museum has extensive archives, exhibits and programs plus the home of the South-East’s largest resource for genealogical research. In one minute I was able to locate my grandfather upon his arrival in the US from Russia. It was all our hosts could do to get us going to the next stop. Fascinating stuff!

Rounding out my education was a stop at the Frank McClung Museum at the University of Tennessee. It focused on archeology and the Native People of Tennessee, plus the Civil War and much of the history of the state. Having limited time I had to look at the Blount Mansion, in the center of downtown and Knoxville’s only National Historic Landmark, from the outside. I also did a drive-by at the Mabry-Hazen House; an Antebellum home built is 1858. It was in the same family until 1987 when it became a museum. More than 1,600 soldiers from the Civil War are buried on the property.

As I finished my weekend visit wearing my orange Tennessee t-shirt I thought about some of the city’s native sons and daughters: Kenny Chesney, Johnny Knoxville (guess where he got his name), Quentin Tarantino, Polly Bergen, Peyton Manning (if you have to ask, you are not a football fan) and an almost native- Dolly Parton, whose Dollywood is a half hour outside town.