Observing whales frolicking just feet away! Conducting seals underwater swimming in a swirling symphony! Hiking over small pristine islands, vistas of the deep blue Sea of Cortez in view! All this adventure waits for you when you board Cruise West. Late winter/early spring is the best time of year to take part in this trip. With that in mind we signed up for a January Baja and Sea of Cortez Whale Watching Expedition and flew to Cabo San Lucas in Baja California, Mexico. Upon arrival, we boarded Cruise West’s Spirit of Yorktown, joining a hundred guests for a week to sail north to Loreto.

These whale-watching cruises are offered late December through March when the gray whales migrate south from Alaska to the warm bays of Baja to give birth and breed. One of the principle sites is Magdalena Bay, across the peninsula from Loreto, on the Pacific side. As we found out, however, there are also other whale species to be seen in the Sea of Cortez.

Just before sunset we were underway, sailing around the landmark El Arco arches, at land’s end. Soon we headed north, our first stop next morning-Isla Espiritu Santo, north of Baja’s capital, La Paz.

A little background: Cruise West operates nine small ships, with capacities up to 138 guests. The line has itineraries worldwide, including Alaska, Asia, the South Pacific and Central America. As well, ships explore the Columbia and Snake rivers.

The advantage of traveling via small ships is that many of the stops made are in spots that large cruise ships cannot access. This enables guests to observe wildlife from up close. When we anchored off seldom visited small islands, DIBS (Demaree Inflatable Boats) took us ashore for sightseeing and beach activities.

There is no need to sacrifice shipboard amenities while on these smaller vessels. In fact, shopping on board, although limited, is available: nature books, logo shirts, hats, sweatshirts and jackets, film and the usual coffee mugs, although these were unusually attractive. With unseasonably cool weather, many of the guests were wearing warm “Cruise West” gear.

On a small ship, space is at a premium. The Yorktown’s main deck’s large, attractively decorated lounge is home to the gift shop, bar and meeting area. Every breakfast and lunch guest could choose lighter fare at a buffet in the lounge, and at 6 p.m. every evening hot and cold hors d’oeuvres were served here as well. Not only could guests enjoy others’ fellowship, but the window-filled room provided the opportunity to watch the daily sunrise and sunset as well as passing scenery. Dinner was served at 7 p.m. and only in the dining room. Tables seated six, and it was fun to find new guests to dine with each evening.

While the dining room breakfast menu was the same daily, it did feature a different special – from blueberry pancakes and Crepes Nancy to Huevos Rancheros. Lunch always had a featured soup with a choice of sandwich or salad. And, one could always have a hot dog or hamburger.

Again, on a small ship, kitchen space is also limited. But at dinner the chefs offered soup, two salads and choice of three entrees – one always vegetarian. Dessert, too, featured one special, although ice cream, sherbet and cheesecake were always available.

The Sea of Cortez is known to be a fisherman’s paradise, and the ship responded by having a delicious fish choice every night, all fish from Mexico. While I enjoyed the various seafood, my wife raved about both the lamb and duck, saying the duck was the best she’d ever eaten.

To make us better appreciate our onshore explorations, before and after dinner there were slide presentations on the geology, flora and fauna of areas visited given by staff naturalists and Paulino Perez, a marine biologist from La Paz. As a special added attraction, a professional photographer was onboard to give photo tips and lead picture-taking walks. All talks were well attended; folks on these cruises are adventurous and want to be educated on the environment.

Our first stop, second day, was Isla Espirtiu Santo. We stepped ashore on Bonanza Beach, a nature conservancy site. Some took hikes over the dunes and through arroyos with Paulino pointing out the many endemic plant species. Others walked along the beach, finding a treasure trove of shells and sun-bleached fish skeletons washed ashore.

Kayaks were available and groups of kayakers explored the rocky shoreline. After a beach stroll, my wife and I went snorkeling among the array of colorful fish and marine life. The water is a little chilly in winter, but wetsuits were provided and certainly welcomed.

On day three, we left ship in the morning and took an hour’s bus ride across Baja’s scenic peninsula to Magdalena Bay, where we boarded outboard motor boats (pangas). We were primed to see the whales and their calves-but, unfortunately, no whales were here yet.

The grays are usually here late January, but there are no guarantees. This year they hadn’t come yet. (Just our luck-we heard that next day 14 were spotted.) We did have fun, however, spotting birds among the bay’s mangrove forests.

We were very lucky, though, next day. While cruising to Loreto, Captain Paul Figuenick broadcast that sperm whales were spotted on the horizon. As the ship slowly progressed, we immediately came upon a rare sight-a pod of 15, playfully swimming alongside. Breaching and spouting, the giants were a great sight to see. We could even hear the clicks of their calls. It was more than an hour before they swam away. 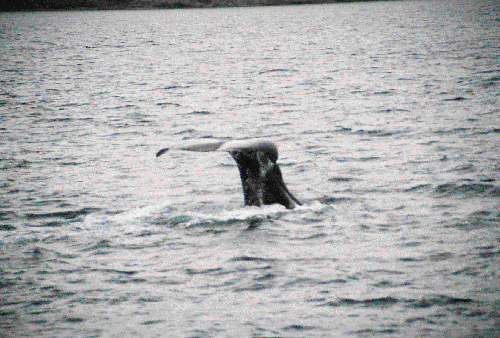 Sperm whales, handsome with sleek gray skin, are the largest mammals in the world which have teeth. We were fortunate because groups this size are seldom seen here.

On tap next day was more small-island exploring. We visited the lovely Isla San Francisco. The water was especially clear and snorkeling was excellent. Photographers had a field day capturing the desert island beauty.

On Day 5, we got off in Loreto. There were a variety of things to do in this quaint town, including a tour, highlighted by visiting the historic mission and museum, Nuestra Senora de Loreto. This was the first in the string of missions leading up to Northern California.

Another advantage of sailing Cruise West is the fact that city tours and daily outings are included in the cruise price. On larger lines shore excursions are usually extra. Some exceptions were the day-long bus tour from Loreto to historic San Javier, the best preserved of all the Jesuit missions, and a Ceviche By the Sea event in Loreto; both came extra.

Following Loreto, we anchored off seldom-visited Los Islotes (Little Islets), my favorite stop, where we had the opportunity to swim with the sea lions. I enthusiastically signed on, but my wife and others felt that it was too cold in the overcast weather. They chose instead to see the sea lion colony up close in a DIB.

We hardy souls were taken a hundred yards, near shore, and told to jump off in our snorkeling gear. At once playful calves greeted us as if our arrival was the day’s big event. The little guys were attracted by motion, so I made wavy motions with my arms as they bobbed and weaved, encircling me like synchronized swimmers. Once in a while a large parent would come up, looking me in the eye as if to say, ”Be careful with the kids.”

We finished up our trip with a day in City La Paz, Baja’s colorful capital city. Late afternoon, we left for Cabo, bringing to a finish our adventure below the border.