Spinalonga, a small island off the northeast coast of Crete near the resort area of Elounda, has evolved over thousands of years from a hiding place for Christians fleeing Roman soldiers, followed by Cretans fleeing invading Turks, to a massive fortress constructed in the 1500s by the Venetians to protect its eastern Mediterranean interests. Finally, sadly, it became the official Greek leper colony for the first 50 years of the 20th century. Abandoned, desolate and decaying, the intrinsic and haunting beauty of the island evokes a myriad of emotions from the thousands of tourists, researchers and historians who tour the island each year. The former Venetian fortress island of Spinalonga now lies deserted.

For centuries leprosy, now known as Hansen’s Disease, was misunderstood, and the ability of a patient to transmit the disease was exaggerated. Now, we know that only about 5% of the population is susceptible to the bacillus, a bacterium similar to tuberculosis, and close, personal contact is required for transmission. However, for centuries patients showing signs of the disease had been quarantined, often for the balance of their lifetime, to supposedly protect the citizens around them. Thus, in the early 1900s, Greece decided to send all their diagnosed patients that had been lodged at various places around Crete and Greece to Spinalonga, though the reasons for the transfer are still unclear. Some authorities say it was to rid Spinalonga of a resident population of Turks that were deemed unwelcome in Crete. Others indicate that the natural isolation of an island, coupled with its existing village and homes made the decision easy, especially since the patients could be supported by goods and personnel transported the short distance from the village of Plaka by boat. However for the first twenty years, very little was done to help those patients who were uprooted from their families and unceremoniously dumped on the island with little infrastructure to support them. Finally, the 1930s brought some welcome change. Patients were awarded pensions; electricity was brought to the island; churches and schools were built and better medical care was made available. With the discovery in the 1940s of medicines to treat Hansen’s Disease, Spinalonga was no longer needed to quarantine patients, and it was closed in 1957. The island lay in desolation with the passing years taking their toll on the buildings until the Greek Tourist Board and the community of Elounda began renovation of some of the buildings to allow visitors to view this historic site during tourist season.

Tour boats take visitors to Spinalonga from Agios Nikolaos and Elounda several times each day at a cost of approximately $15; the trip from the Elounda harbor across the Gulf of Korfos requiring about fifteen minutes, while those boarding at Agios Nikolaos must allow approximately an hour from the dock. Since no accommodations exist on the island, visitors must depart before nightfall.

This dark tunnel greeted Hansen’s Disease patients’ entry to Spinalonga. Identified on many maps as Kalydon, a name never used by locals, this is but one of mysteries that surround this tiny island. No one seems to know exactly from where the name Spinalonga comes. Some attribute it to the nearby peninsula that resembles a “long spine” jutting out from mainland Crete. Others believe that the Venetian historian, Flaminios Kornilios, called the island Spina Leonis, which loosely translates to the “back of the lion”, and that this name was corrupted over the centuries to Spinalonga. Still others maintain that the Venetians named it Spinalonga after their own nearby island, now called Giudecca.

Whatever the origin of its name, what is certain is that Spinalonga has a fascinating history as does the entire island of Crete, which is believed to have provided Greece with the basics of a democratic society attributed to the Minoans. They left a legacy of elegant ruins at Knossos, south of the capital of Heraklion. Those with an interest in pre- and ancient Roman, Greek and Arabic histories can find much of interest in the numerous villages and archeological sites on this, the most southerly of the Mediterranean islands. However, visitors with more sybaritic interests will find them fulfilled with a visit to this friendly, low-key, sun-dazzled escape.

A spectacular sunset over the Bay of Korfos ends a perfect day on the beach.

While all corners of Crete offer vacation and beach opportunities, the coast from Agios Nikolaos north to Elounda (pronounced ee-loon-da) and on to the village of Plaka forms the nucleus of the beach resort and hotel corridor that attracts mostly European tourists. Lodging from small, family-owned apartments to five-star resorts dot the landscape, tumbling like white building blocks down the dry rocky slopes.

This windmill is a remnant of the famous salt-works near Elounda.

While April 1 to November 1 encompasses the high season for travelers to Crete, Elounda remains a fairly quiet fishing village until the weeks of July and August. The off-season months of March and November offer the attraction of peaceful strolls and quiet contemplation in comfortable weather at low season pricing. However, the number of open hotels, restaurants and shops are markedly reduced outside of high season. Corali Studios, an apartment hotel, located across the road from the beach and overlooking Elounda harbor has a full view of Spinalonga. It remains open all year with prices ranging from $65 to $100/day depending on the time of year and size of apartment. A short five minute walk brings the visitor to the village where grocery stores, shops, restaurants and bars line the waterfront. 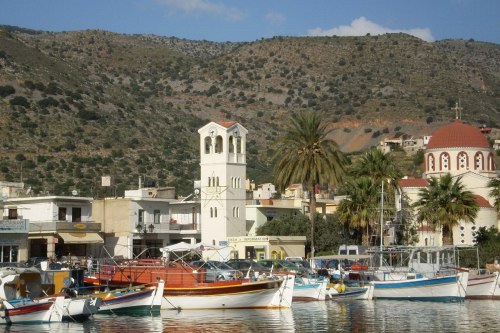 The picturesque fishing village of Elounda is a charming stop for a day or a month.

While many European travelers travel to Crete by charter planes as a part of a vacation package, Americans may find the best connections through Paris, Frankfort or London to Athens and continuing on to Heraklion. Many visitors spend time in Athens and take the ferry to or from Crete. Taxis can be hired in Heraklion for the hour-long drive to Elounda, or the hotels in Elounda will happily send a local taxi to pick up their clients at the airport or ferry terminal. The cost is about $100 each way. Rental cars are available in all major towns, but for those who prefer to not drive, the public bus system, KTEL, offers inexpensive fares around Crete at convenient times. Also, during the season, tour companies in Elounda and Agios Nikolaos offer reasonably priced half-day to full-day excursions to further explore this lesser-known destination.