If sales are all about forming relationships, then the women of the Black Hmong tribe in northwestern Vietnam should write the marketing book. This discovery was made on a recent trip to visit Vietnam’s small ethnic minority tribes, many of them located in the mountains surrounding Sapa. These include the Black Hmong, Flower Hmong and Red Dao people.

Thanks to its cool weather in the long, hot summer months, Sapa was a hill station retreat for the French when they colonized Vietnam. It fell into disrepair until recently. As Vietnam has attracted more travelers and as more Vietnamese have been able to vacation, the area has grown into quite the resort, sporting over 100 hotels. This has been a financial blessing to the local tribes whose villages are near Sapa.

I was traveling with two girlfriends. Our plan was to trek through the valley with a guide and explore some local villages. As we walked out of Sapa, we were surprised to be joined by six women of the Black Hmong tribe dressed in their colorful headresses. They are named for the dark indigo dye used in their clothes. Two of them paired up with one of us. “Hi, what’s your name? Where are you from? How many children do you have?” At first, I was resistant to their questions, but they were so friendly and kind that I opened up and began to question them also. They had items to sell but there was no mention of that. 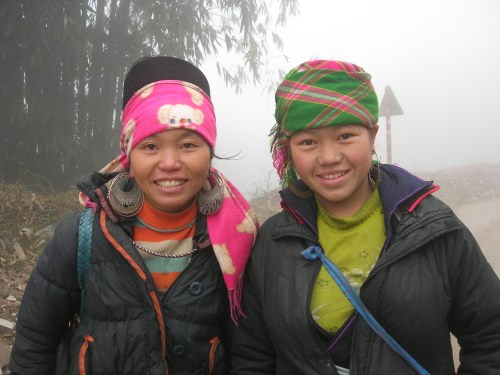 We meandered down into the valley, chatting and visiting. The path became very steep, muddy and slick as we turned off the main road. The women gently took our arms and steadied us as we descended to the river level. Our group paused at one of the women’s houses for her to briefly nurse her baby. At Lao Chi, we stopped at a restaurant where our guide was to cook us lunch. It was there, two hours after the start of the trek, that we finally looked at the women’s goods. They had invested much of their time getting to know us (and we them,) hoping we would buy something. Obviously, we did. It helped that they had some nice selections of the embroidered purses, pillow covers, and wall hangings that we had seen in Sapa stores. But we would have bought something anyway, simply because we were now on a first name basis and had shared so much personal information. After hugs, Yen, Coo, Zoa, Lillie, My and Zaa left, and we had lunch seated in an open air restaurant overlooking the river and dormant rice fields.

After lunch we discovered that this marketing system was not limited to one walk. As we continued on, twelve new Hmong women joined us. “Hi, what’s your name? Where are you from? How many children do you have?” I don’t know if the word got out that we were generous buyers, but more women continued to join us. When we finally stopped at our destination, 22 women were walking with us. We couldn’t buy from all of them and actually we bought very little from the second group. But they candidly said that was okay, “there would be other visitors.” 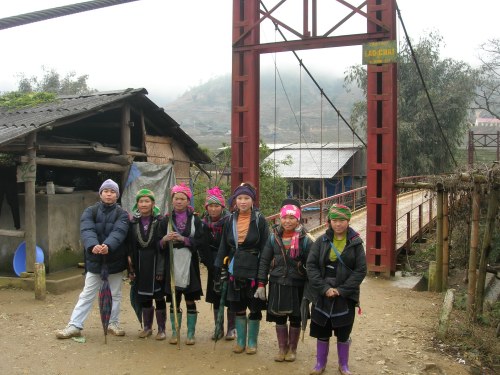 From our walks with the women (there were more walks), we learned that the men are too shy to sell. Because the women are now selling, the men have assumed extra chores, including minding the children. The villages have even brought in English teachers to help them with the vocabulary they need. There is a system among those selling in the villages. Only one sale per person is allowed until all in the group have made a sale. They share goods among themselves to be sure everyone gets a sale.

During the next couple of days, we would see some of our new friends in the marketplace or on the streets of Sapa. They always smiled and said hello but did not ask us again to buy. Not all of the Hmong women were so disciplined as we were often approached on the Sapa streets to buy. It is certainly a risk that this new found industry could seem like begging. But we were impressed with the self-imposed rules that the village women used to protect both us and them.

The business schools in our universities could learn some lessons from the Hmong women. After all of the business, marketing, and financial plans, the decision to buy is an individual one. And being on a first name basis can tip the scale. 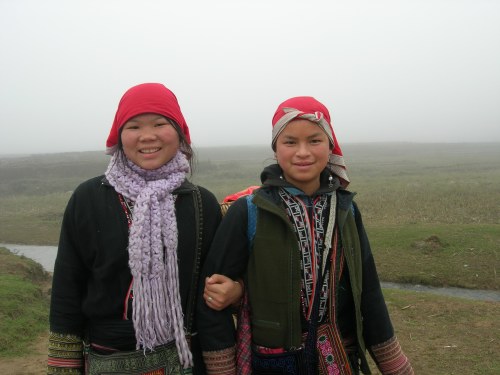