I told myself ahead of time I would not stare. Even though the bare breasts hung low and large, my eyes instead went to the large, intricate metal jewelry adorning their necks, wrists and ankles. I was believed that what might have been an embarrassing focus became only a gloss-over glance.

Viewing a live nude show in Vegas? Not quite. Instead, this was my introduction to the beautiful bodies and gentle lifestyle of the Himba people, the last remaining tribe in Namibia, on the southwest coast of Africa, to cling savagely to its native identity dating back over 500 years.

Although most of the country’s 12 separate ethnic groups have retained their own language, food and beliefs, many have been converted to Christianity and, while still very poor, have become somewhat Westernized. Not so the Himbas. Clad in very little clothing, breasts exposed, their bodies covered daily through a lengthy ritual with red ocher pigment mixed with animal fat, the Himbas maintain a primitive culture. There are no stores in the village, no satellite dishes, and no outhouses. Using the woods that border their village as their toilet, it was clearly the largest bathroom facility I had ever seen. On the other hand, the men don’t have to worry about remembering to put the seat down.

Unlike other tribes, the more isolated and economically self-sustaining Himbas were able to resist the influence of missionaries who wanted them to cover their bodies, change their gods, upgrade their stick, mud and dung huts, and modernize their nomadic lifestyle. They are similar perhaps to the more well-known Masai tribes in Kenya in their ability to maintain ancient customs.

Bhavi related the story that several years ago, one of the Himba leaders was invited to Germany, a country that once controlled Namibia in the early 1900’s, to talk about the German atrocities that occurred there in 1904. Though urged to wear modern clothes, he refused to sacrifice his traditional attire.

Commenting on the matriarchal society of the Himba, in which the women do most of the work inside and outside the household, our guide pointed out: “The women call the shots but they make the men feel they’re in charge.” Somehow this did not seem like such an alien concept to the men on our tour…

Several of the women in the small village, made up of circular huts that might, depending upon the time of day, house as many chickens or calves as they do people, gathered in a circle to tell stories and sell their wares. Through a local interpreter/guide, I queried the female elder of the tribe about whether the young girls object to the daily ocher ritual or might want to dress in a more modern fashion: “They do not want to change,” she adamantly assured me. “They are happy continuing their traditions.” Nonetheless, the local guide shyly indicated that that’s not always true.

The guide further explained that in reality the Himbas are slowly being forced to alter their lifestyle due to lack of pasture for their cattle, encroachment upon their land by more modern-leaning tribes, and other Western influences. Not surprisingly, this is something they do not want to accept. I then asked my captive audience if the Himbas were under any pressure from the government to change. The response: “Because we are a self-sustaining society — we tend our own goats and cattle and grow our own food — there is nothing external that can force us to change. Even people coming with electricity and other forms of modernization — even if they come with cattle prods to move a stubborn herd — we will resist.” She was pretty convincing. The local guide looked skeptical. 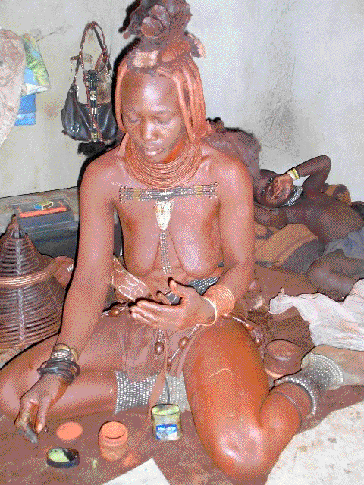 The Himbas were only one of several different tribespeople we met with and in every other case, the mere mention of President Obama brought exuberant thumbs up and high fives. When I alluded to him in front of the lovely group of Himba women, however, I was greeted with blank stares.

Those of you who wish a closer look at Himba culture without traveling to Namibia should rent the feature film, “Babies,” which came out, appropriately, in time for last Mother’s Day. It follows toddlers from four countries, including one from a Himba community in Namibia.

Namibia is not only known for its interesting two-legged inhabitants; its four-legged creatures are equally intriguing. Although Etosha National Park is the premiere game-viewing area, we had seen quite a few animals, including ostrich, oryx, kudo, springbok, giraffe, zebra, baboon, jackal and elephant, during a previous stop at the Palmwag Concession southwest of the park.

By the time we got to Etosha, we were all pretty much of one mind: if it’s not a lion, cheetah or a rhino, don’t bother telling us. But Etosha, home to 114 species of wildlife, didn’t disappoint. Within 10 minutes of entering the park, we saw a lion. Okay, it was more than 350 yards away, but Bhavi said it was a lion and we believed him.

After that, however, it was downhill. When we next stopped miles later, it was for a rabbit. I thought, “Wow, he’s getting desperate!” But my cynicism was short-lived. Soon we arrived at a watering hole giving sustenance to a whole family of lions — a large-maned dad, a sleek-looking mom and a number of cuddly cubs, while nearby a lioness neighbor was feasting on a dead rhino. Hanging out at a safe distance were dozens of thirsty springboks, zebras and jackals just hoping the lions would tire of the watering hole and leave. They just stood there — lusting — and Bhavi predicted that none would get to drink that day. 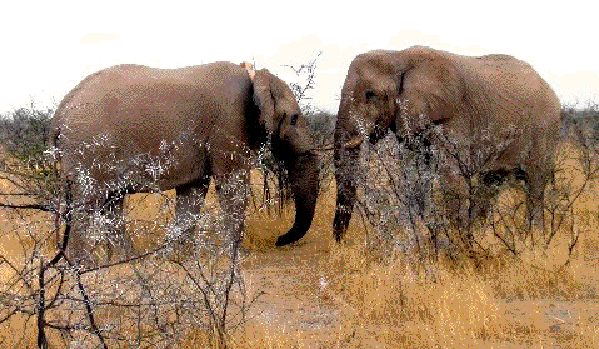 The intimidation was palpable — until one very brave little warthog approached the far end of the waterhole; eventually, a couple of zebras and springboks followed suit. I could just imagine the thought process: “Well, if he could do it, I may as well try.”
At that point, I could have returned to our lodge and been very happy with the day’s outing — and it was only 9 o’clock in the morning! But in truth, animal viewing in Etosha can be somewhat sporadic.
If the goal of your trip is a safari, go to Tanzania, Kenya or Botswana; but if you’re seeking sheer diversity of experience extending from unique topography — the highest sand dunes in the world — to indigenous culture to a fair amount of animal viewing, Namibia should be at the top of anyone’s Big Five (to keep with safari terminology) list!
For more information, log onto oattravel.com or call (800) 955-1925.

Photo credits: Bruce Genderson for the rhino and the village.
Victor Block for the elephants and the Himba woman