Imagine the thrill of some mild-to-wild water rafting on Southwest Colorado’s Animas River, followed by the excitement of one of the great train rides of the world–the Durango/Silverton Narrow Gauge Railroad. Believe it or not, this and much more is what’s in store in a visit to the old, Wild West town of historic Durango, Colorado, located just 3 ½ hours north by car from Albuquerque, NM.

Mild to Wild, by the way, is the name of the company that gave the two of us, along with our two eight-year old granddaughters, our first-ever experience of shooting the rapids – well, okay, we didn’t go above class three — which is the “milder side” of the one-to-five rating of the severity of the rapids on any given river water course, but the experience was nothing short of fabulous.

Fitted out neck-to-toe in wet suits, water boots and helmets, we spent what was to us an amazing four hours on the water, with a short break half way for some apple and orange slices, protein bars, and ice water, all served river side on a picnic table. The folks at Mild to Wild go out of their way to make sure every need is met. For example on our tour, Sam, our guide was great at explaining all the safety precautions, assisting us in and out of the rubber boats, pointing out the abundant wildlife, and even giving some of the highlights of the area as we floated on down the river. This included showing us the cliff where Paul Newman and Robert Redford took their terrifying jump into the river in the classic Western film, “Butch Cassidy and the Sundance Kid.” Rafting on the Animas is truly a thrilling experience that we heartily recommend for young and old, including family groups; it’s a real winner! We couldn’t believe the squeals of delights from our granddaughters.

The company also offers exciting jeep trail tour adventures for some extra non-stop fun. Also in the small and beautiful city of Durango is one of the two departure points for a ride on the Durango/Silverton Railroad, another experience unlike any other. Built in 1882 by the Denver & RioGrande Railway, this narrow-gauge, coal-fired, steam-engine railroad was named one of the “Top ten most exciting train journeys in the world” by the Society of American Travel Writers. The railroad has served miners and tourists continually since the day it was built, and now roughly 200,000 passengers ride these rails each year. 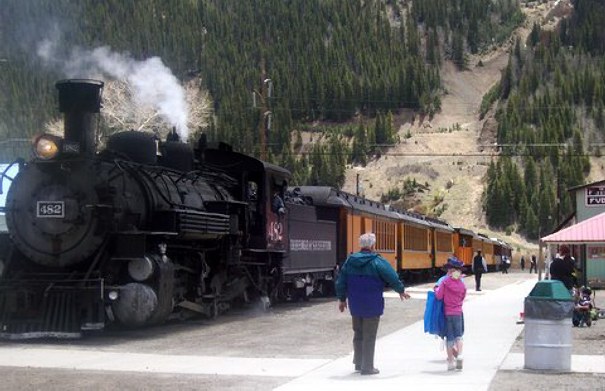 Passengers may choose to travel the railroad line north to Silverton and return to Durango by coach (or vice versa), or they may also choose to ride the railroad both directions. We decided on the option of a comfortable 52-mile ride on a bus coach to Silverton and were thrilled with the majestic mountain scenery on the way and also the informative narrative provided by our animated and well-informed bus driver. This choice provided us with essentially two trips in one, thus providing some greatly varied scenery.

Boarding at 9:15 am, we and our two granddaughters arrived in Silverton less than two hours later, spending another two hours there walking the streets of the old, gold mining town, once with a population of 2,000. Due to the snow and cold, now only 300 people live in this remote little city year round. We had fun stopping at Grumpy’s Restaurant and Saloon in the old, Grand Imperial Hotel to hear Dale Elliot plunk out some great, old ragtime tunes on the honky-tonk piano and later shopping for a few souvenirs. The time passed quickly until the big, black engine, puffing coal smoke, chugged into town for the return trip to Durango.

We returned to Durango on the 3 ½ hour train ride, sitting mostly in one of the open-air cars, through some of the most rugged and beautiful scenery anywhere. The train mostly follows the Animas River as it churns and snakes through the deep gorge, then rises high into the precarious slopes of the mountain sides where passengers look down at the breath-taking vistas below, beholding an ever-changing and exciting panorama.
San Juan County, highest in the U.S., boasts 13 peaks rising over 14,000 feet. The train ride weaves though many of the granite cliffs of this part of the Rocky Mountains with their endless waterfalls cascading down over the tortuous rock formations. Thousands of stalwart pines cling to life in this hostile environment, and one of the conductors on the train told us he never tires of the breathtaking excitement of the trip. We could easily understand why.

We stayed in Durango, by the way, at the elegant, city-center Victorian-style General Palmer Hotel and, this, too, was a delight – especially the freshly baked cookies each afternoon and hot muffins every morning at the tasty Continental breakfast. Were it not for the electric lights and computers at the front desk, we would have thought we had been transported back in time to the real days of the Old West. 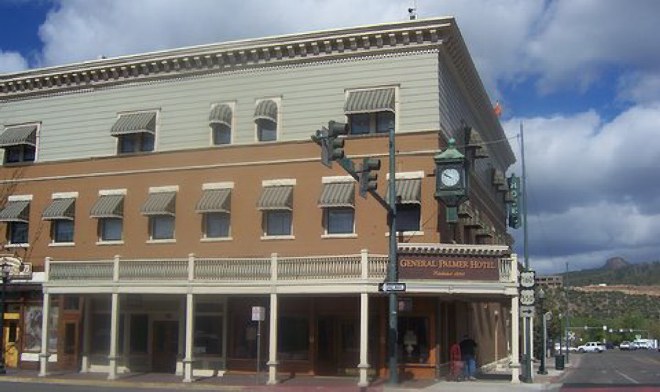 To remember our visit, we even had our vintage photos taken at the “Thru the Lens” Fine Portraits shop on Main Avenue.

A popular eatery in town, by the way, is the Steam Works Brewing Company with its signature dish, Cajun Boil.
To experience some “dang good fun and excitement” be sure to put Durango, Colorado – where dozens of Western movies, by the way, have been made over the years — at the top of your travel wish list.