What can the oldest city in the United States tell us about romance and destination weddings? To answer this question we need to revisit the history of St. Augustine located on the eastern coast of Florida. Some 500 years ago, Ponce de Leon, the Spanish explorer on Christopher Columbus’ second expedition to the Americas in 1493, is credited for contributing to the roots of romanticism in the new world. While serving as governor of a province in the Dominican Republic, Ponce de Leon heard of a magical place not far away that held the answer to eternal youth and
health. Now an older man himself, tales were circulating of a frail old man who drank from a magical spring and was transformed into taking a new young wife and having more children. Ponce de Leon requested permission of Charles V, King of Spain, to search for treasures and the legendary spring known only as “the Fountain of Youth”. After searching the near-by islands and drinking water from hundreds of springs, he eventually landed on the coast of Florida where history tells us he truly believed he finally reached his “Fountain of Youth”. Once on land, now the city of St. Augustine, he met the tall native people of the Timucua Tribe, and attributed their exceptional height to the spring water they drank.

Unfortunately, after being shot by an arrow, Ponce de Leon died in Cuba in 1521. Did he actually believe he found the magical spring waters? Most probably not; however, locals and historians continue to perpetuating the myth.

As a result, St. Augustine is known today not only as a celebrated place to pursue the spirit of youth and romance but also as the most appropriate destination location for weddings and marriage anniversary celebrations. Hardly ever mentioned is St. Augustine’s first-recorded wedding, that of Gabriel Hernandez and Catalina de Valdes on January 24, 1594. 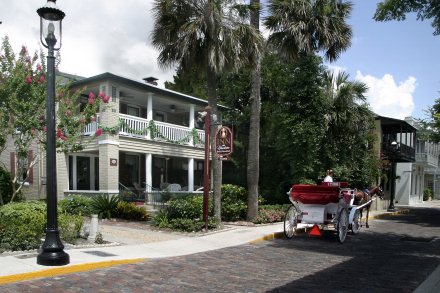 When couples search for wedding sites, they want an intimate setting that is both romantic and memorable. While St. Augustine satisfies these requirements, it also contributes a legendary touch of history. The historic district of the city with its beautiful shops and inns is the perfect place for such a festive occasion. Horse-drawn carriages replace limousines while century’s old inns and boutique hotels offer a local tradition in place of glitzy modern hotels. This quaint picture book setting provides everything from florists, caterers, photographers, wedding officials and beautiful locations should the wedding couple select a beach, an old fort or any of the town’s many historic sites.

The St. Francis Inn is a perfect example of traditional historic accommodation. Located in the heart of the original part of St. Augustine, it is renowned as our country’s oldest continuously operating inn. Built as a family residence in 1565, it was converted to an inn in 1845. For many years, The St. Francis Inn has been a member of the Select Registry, the organization of distinguished inns of North America. It’s not a secret that its secluded courtyard garden has been the setting for many weddings. Each room and suite is unique and appropriately named for historical characters associated with the Inn. Period furniture and décor add to the historical ambiance. However, modern convenience items have not been excluded such as Wi-Fi, I-pod docks and flat-screen cable television. One of the Inn’s biggest attractions is its sumptuous gourmet breakfasts made to perfection by Chef Gary. Guests find the menu of Cinnamon Pecan French Toast Bake, Citrus Pancakes with Mandarin Orange Sauce or the home-made granola completely irresistible.

Chef Gary and his staff at the Inn are experts at hosting wedding parties. Whether its accommodations for visiting guests, the wedding ceremony itself, rehearsal dinners or receptions, one cannot deny the most romantic settings possible are offered at the St. Francis Inn and the many other inns and small hotels that comprise the historic city of St. Augustine.