New Providence (21 miles long and 7 miles wide) is the island home of Nassau, the capital of the Bahamas and is located in the middle of the Bahamas archipelago of over 700 islands. These islands start within 50 miles of Miami and stretch hundreds of miles to the northern coasts of Haiti and Cuba. Only about 35 or so are populated with Nassau, Freeport and Paradise Island hosting most of the tourists. About two thirds of the population of around 260,000 live on New Providence. The city shopping area is compact and easy to leisurely explore on foot. I do not recommend renting a scooter unless you are used to driving on the left side of the road. When the cruise ships dock at Prince George Wharf in the downtown area one can stroll the city and look for bargains in the shops along Bay Street and in the straw markets. U.S. currency is accepted and is interchangeable with the Bahamian dollar. 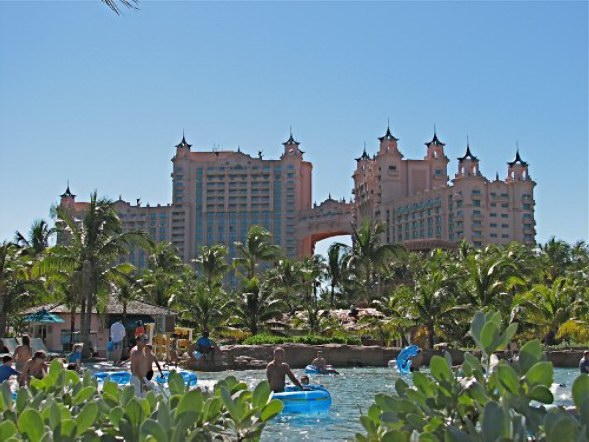 European settlers first came to the Bahamas in 1648. By the late 17th century the Bahamas were full of pirates such as Edward Teach (Blackbeard). The British managed to bring the islands under control and the Bahamas became a colony of Great Britain in 1728. During the Revolutionary War, British Loyalists who left America settled in Nassau, many bringing their slaves with them. In 1776 the American Navy briefly captured Nassau. The islands are still part of the British Commonwealth of nations and British culture and traditions are seen in Nassau (they drive on the left side of the road). The U.S. captured Nassau and held it for two weeks during the Revolutionary War. The Bahamas also were involved with the United States during two storied eras of our past–gun-running during the War Between the States, and rum-running during Prohibition. They were granted internal self-government in 1964, and on July 10, 1973, the Bahamas became an independent nation with Prince Charles attending the ceremony. On the proclamation of independence Queen Elizabeth II became Queen of The Bahamas, and Her representative, the Governor, became Governor General of The Bahamas. 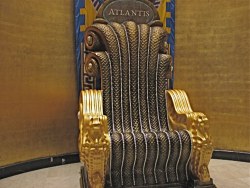 There is no way to avoid coming through Bay Street from the airport on the way to the toll bridge into the 4-mile-wide Paradise Island. Atlantis Paradise Island is a 3,400-room resort with 40 restaurants created by South African hotel magnate Sol Kerzner. The Coral and Beach Towers were first opened as Resorts International, changing its name to Atlantis when the Royal Towers were built in 1998. The 1,201 room Royal Towers contains the 10 room “Bridge Suite,” maybe the most expensive hotel room in the world at $25,000 a night. In 2007 a 600-suite luxury hotel named The Cove Atlantis opened (with a Bobby Flay Mesa Grill) as well as the 497-room Reef Atlantis, which is a condominium hotel residence. The resort contains a marina designed to dock large yachts. The eastern side of the marina features the Marina Village which is a small shopping center featuring numerous restaurants and stores. The Harborside Resort at Atlantis is located on the south side of the marina and consists of 392 villas and a harbor-front restaurant, enjoying all-day shuttle service to Atlantis. If the Coral and Beach Towers are “Coach,” the Royal Towers is Business Class. If the Cove and The Reef are First Class there remains the One Only Ocean Club as “Private Jet.” There is an 18-hole golf course with a Jean-Georges Vongerichten Dune Restaurant. Jean-Georges has also opened Café Martinique in Marina Village serving classic French gourmet fare. The casino is the largest in the Caribbean with a Nobu Restaurant next to its entrance.

Trying to describe the water activities is impossible. I stayed 4 days and got to only a half-dozen. There are 20 swimming areas, 12 different pools, 3 miles of beach, a health spa, fitness center, tennis and basketball courts, 12 rock climbing surfaces and a seven-acre snorkeling lagoon. Aquaventure was opened in 2007 and the 141-acre, 200 million gallon Aquaventure combines slides, lazy rivers, and rapids into one large waterscape. The centerpiece of the attraction is the Power Tower, which contains four waterslides. The slides include The Abyss, The Drop, The Falls and The Surge (you can guess which one I tried). Aquaventure also includes The Current, a mile long, three million gallon water ride complete with waves and artificial tidal surges (which I braved). At the Royal Towers is the Mayan Temple entertainment attraction consisting of 4 major slides: Leap of Faith, the Challenger Slides, the Serpent Slide, and the Jungle Slide. The Dig is a series of aquariums located beneath the lobby of the Royal Towers and is the world’s largest open-air marine habitat. Hundreds of different aquatic species can be spotted in the Dig’s various tanks such as angelfish, sharks, manta rays and various types of jellyfish. If one observes the bottom of the floors in the different aquariums, wreckage and debris will be scattered about representing the “Lost City of Atlantis.” A Predator Lagoon is full of sawfish, barracuda and stingray, which I did not try. A 100-foot clear acrylic tunnel runs underwater, allowing visitors unobstructed views of the marine environment. Dolphin Cay is the 14-acre dolphin interaction and education center. It is home to 16 displaced Hurricane Katrina dolphins. There is shallow and deep interaction along with sea lion programs. When the kids are not in the water there are activities that free up the parents. Included are: Atlantis Kids Adventure with movies, games, computers, culinary kitchen and arts and crafts for kids ages 3-12. Club Rush is a fully supervised “No Adults” tweens club. Recently opened are Crush, a state-of-the-art teen club for ages 13-17 with an interactive Internet lounge, gaming stadium and 1,500 square-foot dance club.

Atlantis LIVE: In the last few years, Atlantis has made an effort to host concerts and other events. In 2010, Jerry Seinfeld performed at the Atlantis resort as well as the Jonas Brothers, Taylor Swift, Justin Bieber, NSYNC, etc. Miss Teen USA 2008 took place at the resort and in 2009 the 58th Miss Universe pageant was held at Atlantis, the first time in the Bahamas.

Now a description of the basketball tourney Battle at Atlantis with a pitch from Yours Truly: A basketball team can play in a “Qualifying Regular-Season Multiple-Team Event” (commonly referred to as a “QRMTE” or an “Exempt Event”). They can play either 27 contests and one QRMTE or 29 contests during a season in which the team does not participate in a QRMTE. Basically, the NCAA permits schools to play 29 regular season games, but schools can play up to 31 games in the regular season by participating in a QRMTE/Exempt Event (27 regular season games, plus 3 or 4 in the event). 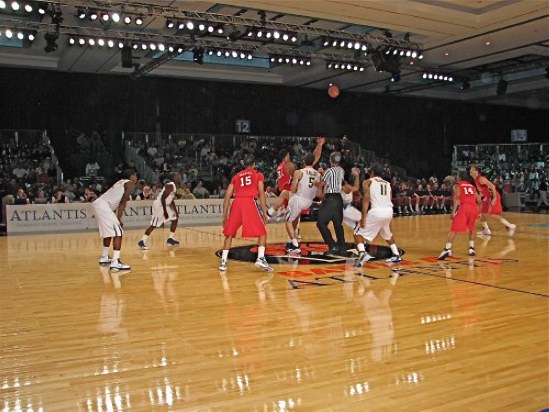 NCAA Bylaw 17.3.5.1.1, currently defines a QRMTE/Exempt Event as one in which: (a) the event is sponsored by the NCAA, an active or affiliated member institution or a member conference of the NCAA and must take place in Canada, Mexico or the United States or one of its territories; (b) the event includes no more than four contests per school and concludes not later than 14 days after the first contest of the event; (c) participation is limited, by conference, to one team per conference and, by school, to not more than once in the same event in any 4-year period; and (d) each participating institution is using 27 games plus the QRMTE/Exempt Event as its maximum contest limitation for that season. Proposed legislation would add The Bahamas to the list of territories in item (a) above.

Editors Note: After I wrote this article the NCAA gave the Bahamas exempt status, clearing the way for the island nation to host a new holiday tournament that organizers hope will become the East Coast version of the Maui Invitational. The legislation goes into effect August 1, 2011. There are already preliminary plans in place to hold an eight-team tournament of Division 1 schools over Thanksgiving weekend.

Coaches want more games, not less, so none play in non-exempt tournaments. A few years ago there were 10 exempt tournaments and today there are almost 50 Invitationals, Classics, Challenges and Shootouts. Go ahead and name a half dozen of them. The Great Alaskan Shootout and the Rainbow Classic in Hawaii were started in the 1960s to help ease the scheduling problems of non-mainland schools. Now, both of these tournaments are in danger of being discontinued. The NCAA now owns the NIT Season Tip-Off. In 2010 I have watched the Coaches vs. Cancer and NIT tournament in New York as well as the Puerto Rico Tip-Off, Maui Invitational (Editors Note- Matt Mahar, the Chaminade Athletic Director & coach is the younger son of Buddy Mahar who was a friend when he coached at Columbia College), Cancun Challenge, Old Spice Classic (Orlando) and CBE Classic in Kansas City. 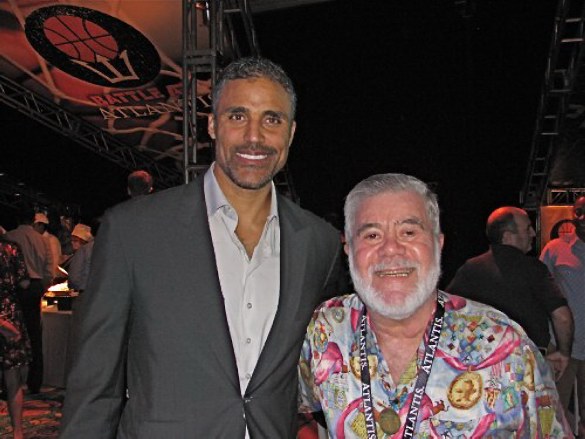 One coach told me at Battle of Atlantis: we get money for our program; the kids get game experience and by playing on neutral courts, they get a chance to bond, as a team, and see interesting sites, and it is great for recruiting. In mid-December I was invited (3 nights hotel and most meals were covered, plus my press credentials for the games) to cover “Battle of Atlantis” with Virginia Tech playing Mississippi State and Georgia Tech playing Richmond in two non-exempt games (Note- Seth Greenberg, the VPI head coach, has been a friend since his early coaching days also at Columbia College. I first met Dennis Wolfe, former head coach at Boston University, and now an assistant at Virginia Tech, at a basketball camp in 1974).

George Markantonis President and Managing Director of Kerzner International Bahamas spoke at the Friday night team banquet: “We spent more than a year finding the four teams, purchasing the hardwood floor that met NCAA standards and the baskets and lights. The games were held in the convention center that hosted the 2009 Miss Universe Pageant as well as our live concerts. We have set up seating for up to 4.500 with food and souvenir concessions set up outside the ballroom. The NCAA Legislative Council will make a decision in January regarding our exempt status and then the NCAA member schools vote. If passed, there will be an eight-team tournament next year with four or five top-level teams and the remainder of the field will come from smaller schools and conferences.”

The Bahamas are a basketball crazy nation, and Mr. Markantonis promised that some of the profits from future tournaments would be used to build a basketball court for every school in the Bahamas. By the way, Rick Fox, former Los Angeles Laker player was at the games. He is from the Bahamas. Len Elmore, former NBA player and ESPN college basketball analyst, also spoke at the Friday night team dinner.

The Bahamas are less than a three-hour non-stop flight from New York City and less than an hour from Florida. All four teams were from the Eastern Seaboard area, which worked for everyone concerned. Atlantis even opened Aquaventure an hour early on Sunday so the teams could try out the facilities before returning to the U.S. This was a first class experience for the players, fans and press. I hope they invite me back in the future.