We drove over the Taurus Mountains, which are the same range as the Himalayas and the Alps, dating from the Mesozoic Age. In a short time the climate totally changed from an area for swimming to an area to ski. As we rode, Matin, our excellent SmarTours guide who has a Ph.D. in political science, continued to educate us about Turkey, about today’s culture and customs and about the ancient archeological sites we were about to see.
Once we passed through the mountains heading west, we were traveling along the Aegean Sea with the mountain range running parallel to the coast, Because of the natural harbors and good farmland, Greek people settled here from about the 13th Century B.C. They started city-states, autonomous in internal affairs but related as confederations for military and other collective relations…the first democracies with leaders elected by males who voted. The architecture was copied from the Sumerian and Babylonian civilizations with columns used to support ceilings. 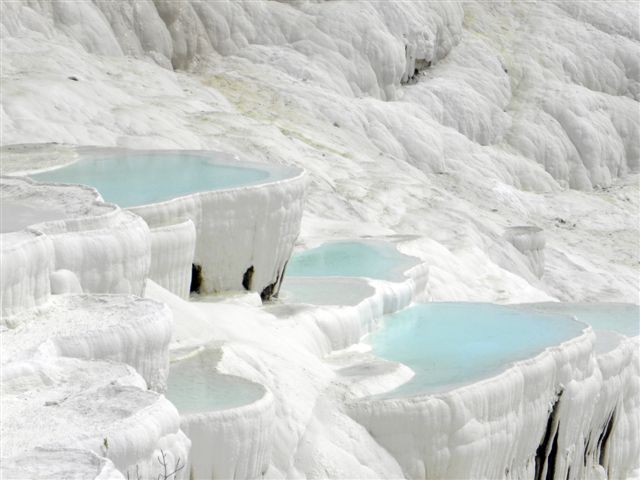 Our first stop was the unique and beautiful Pamukkale, which reminded us of Yellowstone National Park but even more amazing. The natural hot springs through the centuries have formed enormous “waterfall” formations of calcium carbonate, like many stalactites blending together, only not within a cave. The running water forms pale aqua serene pools which visitors are allowed to walk in barefooted. The pools, which having dried, left large geometric patterns in the snow-white ledges. From the road the whole structure appears to be a massive glacier or waterfall nearly the size of Niagara Falls. This whole area overlooks a lovely town with orange tile roofs and verdant green meadows, backed by tall mountains all around. We were there in early spring amidst a carpet of yellow dandelions, white daisies, red poppies, purple grape hyacinths and pink asters, all surrounding the archeological ruins of travertine and marble, mined locally for millennia. The ruins contain an ancient gym, bathhouse, latrine, agora, and necropolis. The archaeological museum here has many artifacts from the area.

Hot springs here became the first spa for therapeutic healing, but the hot water made many conditions such as heart trouble worse and many people who came for a cure died here instead. Because the bodies could not be removed, a large necropolis formed here. It is a very important historical cemetery dating from the 3rd Century B.C. to the 3rd Century A.D. The ancient burial rites included parading the body around three times as farewell, transport it to the cemetery in early morning, sing, and then bury the body. Cremation began after the 5th Century A.D. The family placed the person’s belongings with the body. Poor people placed only a cup of wine, a little food, a mirror, and two coins (to pay the boatman to cross the river to eternity). If the family was rich they placed all the possessions of the deceased with his body. The mirror was because after the long sleep of death the awakening person may not remember himself. Mourners returned home for a large meal and then washed the entire house with salt water to keep evil spirits away. On the 9th day of mourning the family shared whatever possessions are left. 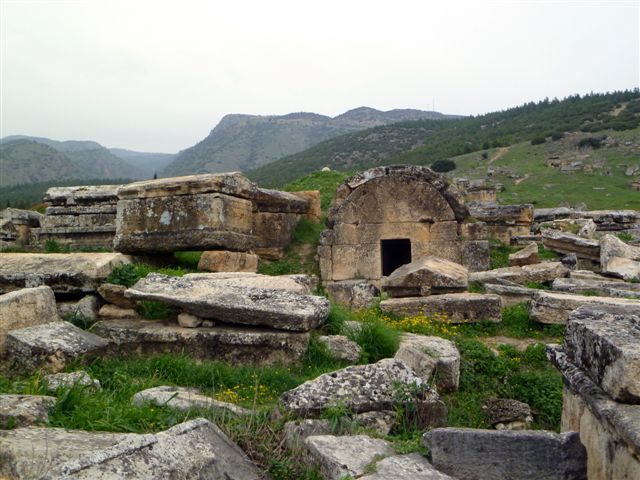 Here at Pamukkale we saw excellent examples of the three kinds of graves which would be purchased before one died: a sarcophagus was a stone box sometimes elaborately carved with scenes of mythology or of the person’s life; a mausoleum was a small marble house for wealthy families, also elaborately carved; a tumulus is a mound shaped grave only for very important and wealthy people. Although the stones here were in remarkable condition and the inscriptions in Greek and Latin were often legible, the necropolis itself was destroyed and the graves tumbled by a huge earthquake in the 3rd Century A.D. and grave robbers plundered the remains. 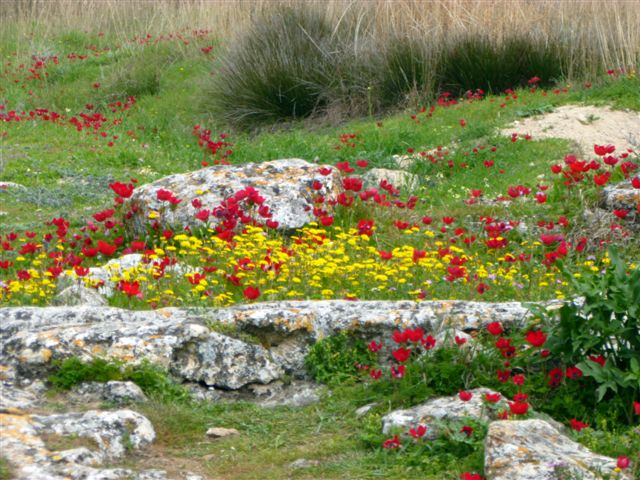 Ruins of the holy city of Hieropolis could be seen at the top of the hill above the hot springs. The bath and gymnasium ruins are impressive. In Greek and Roman times boys and girls were educated, and education was compulsory. They learned ancient Greek, writing, calculus, and abacas. After five years in school boys went to the gymnasium for physical fitness, participating with naked and oiled bodies. At 18 they graduated as citizens.

After leaving Pamukkale we traveled on to the city of Izmir. On September 9,1922, Izmir was freed from Greek occupation. Now it is a center of education with two of the best universities in Turkey. Izmir is a farming center for cotton, chickens, turkeys, olives, and fruit. The city is over 5,000 years old and Christianity came here in the 1st Century AD. Izmir is thought to be the birthplace of the poet Homer.
In Izmir we stayed for two nights at the Kaya Prestige Hotel, located only a few blocks from the bay.