As you watch NASCAR racing on TV have you ever wondered how in the world those cars are made to endure so much and keep the drivers safe? Well, it is time to make a trip to Charlotte, NC, and learn all about NASCAR at the heart of the events, where racing was born in and around the adjacent little towns of Concord and Kannapolis, NC, in Cabarrus County and 90% of racing lives there. We had a delightful time going to so many places significant to racing and learning about how racing helps every driver on the road around the world, every minute.

The Charlotte Motor Speedway features all kinds of racing including two huge NASCAR events each year: Memorial Day weekend in late May and again in mid-October, but some kind of racing is always in the area. The dirt track racing and dragstrips are always popular. And that track is near the big Motor Speedway. It seems all of Cabarrus County and much of Charlotte are into racing, and fans are everywhere. This is where racing LIVES. You could even pass your favorite driver on the street, or find yourself eating beside a pitcrew member at a restaurant, or worship beside them with their families at one of the local churches. 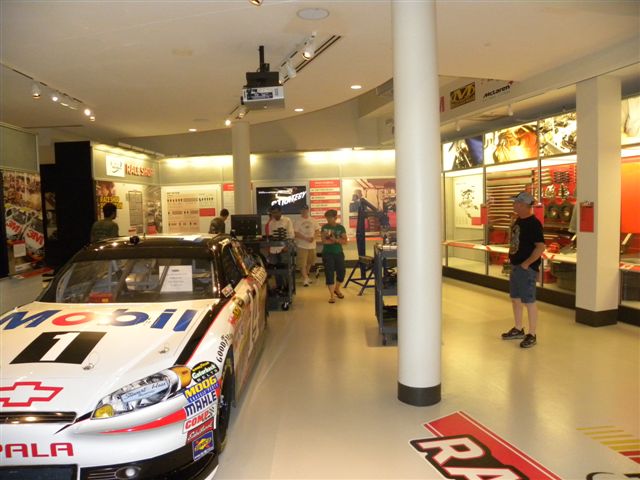 In downtown Charlotte you can learn all about racing and have a great day doing all the fun interactive things at the amazing new NASCAR Hall of Fame . We loved the films about the history of racing on country roads and farms when Dale Earnhardt’s father Ralph was known for his field races as a teen and beyond. With the popularity of this field sport the local hobby progressed and became real sponsored sports events, of which Ralph was one of the stars, and real tracks were created. His son Dale Earnhardt, is immortalized on the DaleTrail through Cabarrus County to places he frequented before his sad death in a crash in February 2001 in the Daytona 500. Don’t miss the Dale Earnhardt Tribute statute is in Kannapolis, near the old Idiot’s Circle, where Earnhardt learned how to drive.
But today because of all the research in science and physics of a crash, few drivers on the track are injured even in the most impressive smash-ups, and you can learn all about this at the Hall of Fame. The Interactive displays are so much fun. And the explanatory boards answer how in the world the cars and drivers can stay safe when it seems everything is flying apart as they hit a wall or each other.
But the very scientific research that keeps them safe makes our own cars safer and safer for our own driving. Some of the things innovated for us through racing are disc brakes, safety strap seat belts, front-ends which accordion on impact better fuel consumption, stronger tires that don’t blow out, steel cages around occupants within the automobile structure, better shock absorbers, durability of chassis, cooling system of the engine, lighter but stronger materials for engine block and car body, aerodynamics of car shape, and many more features.

In 1984, Rick Hendrick founded All-Star Racing. with one NASCAR Winston Cup Series (now Sprint Cup) team and only five full-time employees. After some major wins the company was renamed Hendrick Motorsports in 1985 and today it is a huge 430,000 square foot plant located on Cabarrus and Mecklenburg counties. At Hendricks many full-time employees build and maintain the cars of four full-time teams in NASCAR’s top division: Jeff Gordon, Jimmie Johnson, Mark Martin, and Dale Earnhardt, Jr. You can visit their museum display room where you can see fascinating memorabelia and cars they have built. The manufacturing plant is off limits to the public. The museum and store are really interesting place and the best place to purchase official souvenirs of their drivers. 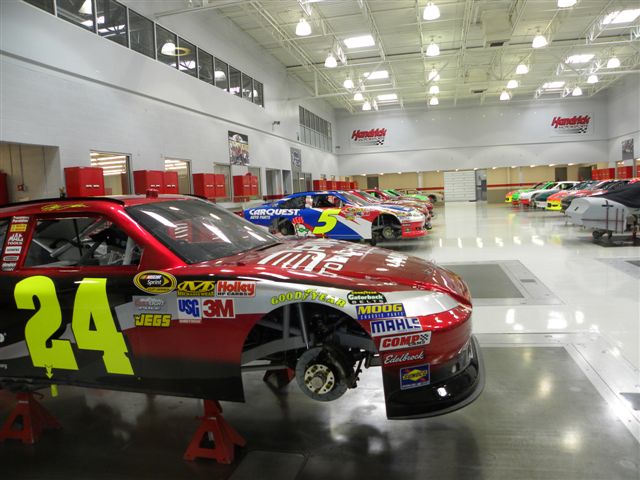 In Cabarrus County there are many other things for race fans of all ages to see and do related to racing. Include these in your plans also: Roush Fenway Racing and Earnhardt Ganassi Racing you’ll see your favorite team cars up close. Take a self-guided tour of each team’s most famous stock cars, sports car exhibits, historical photos and championship trophy displays, shop in their stores. Many other car plants and facilities are in the area and some are open to the public. Consult the Cabarrus County Convention and Visitor Bureau for details.

Your entire family will love playing at the NASCAR SpeedPark . This is seven acres of racing themed amusement park rides, six race courses for all ages, and an arcade and 19 holes of miniature golf. Located just behind the huge Concord Mills Mall, where you’ll also want to shop and to eat at Dave and Buster’s terrific restaurant and place to play games.

And you MUST visit Sam Bass Gallery , the official NASCAR artist who has painted many of the famous posters related to these events. His Gallery is at 6104 Performance Dr SW, Concord. He is a legendary artist and the first one officially licensed by NASCAR. At his gallery you can see over 300 of his famous pieces of art and learn other aspects of the history of the paint schemes used by the teams. His gallery also includes his collection of rock and roll memorabilia and is across the street from Charlotte Motor Speedway.