In my previous article I gave a brief over view of a typical day in the life of a passenger aboard the Viking Danube, one ship in the Viking River Cruise fleet. When you are aboard such a congenial and efficient ship, you are of course more than just a passenger. Your adventure from new port to new port, allows bonding with your fellow travelers, as you share your mutual first impressions. On my Grand European fourteen day Tour from Budapest to Amsterdam, all of our ports of call were new to me, even though I’ve been to Europe many times. Everyone I talked with before the cruise raved about Budapest, and I must say I didn’t see its appeal. But after a brief two days there, I could see how this large metropolitan city with extensive history in culture and architecture entrances visitors.

The city’s various bridges connecting Buda to Pest makes for a visual treat both day and night. As mentioned previously, our ship’s farewell cruise along the river during the night time departure, under lit bridges and public buildings, was a joyous and memorable highlight. There is much to explore in Budapest and a plethora of information is available, but just like our cruise vessel we have to move on.

I didn’t know much about such towns as: Bratislava, Melk, Passau, Bamberg, Wurzburg, or Wertheim before the cruise, but after visiting each for a few brief hours, I can say they are all worth a visit. The church and abbey at Melk, can best be described as “over the top” in opulence. Photos do not do it, or many other Danube/Rhine locales, justice.

Melk with its huge golden figures peering down at you; Passau with its monotone white decor, and of course Cologne’s Dom with its magnificent selection of stain glass; are stunning. We were told that the Dom Cathedral is in constant exterior restoration, and exterior scaffolding may never completely disappear – ever! 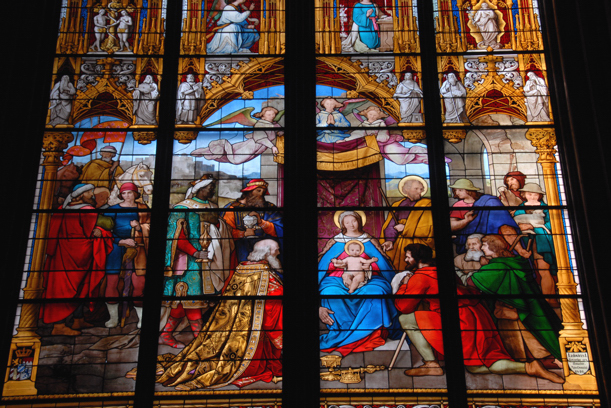 One expert tour guide contracted by Viking jokingly said, “Here we go, another ABC tour.” She said it with a smile, and so we knew the definition was going to come with humor. “It’s Another Bloody Church tour.” We all laughed. Every major and some minor towns in Europe all have noteworthy Cathedrals and some have castles or palaces that could double as castles. Many tours focus around the town’s churches or imperial buildings, as they are a visual benchmark of their golden age. A visit to a grand cathedral a day might be monotonous if it was not for the variety of styles and décor celebrating the personality and proclivity of each locale.

The towns of Wurzburg with its opulent Bishops Palace replete with magnificent frescos, Regensburg with its charming arched and perhaps the oldest surviving stone bridge in Europe (built 1125-46), and Rothenberg’s preserved medieval walled city are all surprise adventures. Then there is charming Wertheim, home to Karl Ittig, (a Disney-like Gepetto of Animated Pinocchio fame) who instead of toys makes exquisite art glass creations, including the original Galileo Thermometer.

A glassblowing demonstration on board our ship was our introduction to this charming gentleman the night before we arrived in Wertheim. His craftsmanship and his charisma captured many passengers ~ this one included. We rewarded him with letting him capture some of our souvenir budget in exchange for fond memories and his stunning creations. His shipping of our purchases back to the states was free and arrived within the time limit he offered. All arrived at my Oklahoma doorstep in perfect condition. Now that’s a Grand European cruise delight.

I can’t leave this brief over view without expressing my exhilaration at the concert contracted by Viking River Cruises in the Palais Auersperg in Vienna. It could not have been more artistically performed in a space where once the Archbishop attended and Wolfgang Amadeus Mozart is known to have performed. Hearing his music and other old world songs along with dances in this setting, could only have been equaled by a glass of champagne at intermission ~ and it was!

You never know for sure when you book a cruise or tour exactly what you are getting. I can say with experience that Viking River Cruises takes care of your cruising adventure in style. For more information on Viking River Cruises and their special offers go to: http://www.vikingrivercruises.com