As soon as my friend and I hopped off the little boat and onto Malaysia’s Tioman Island we jumped into the ocean and swam until sunset. The island is full of life so it wasn’t long before I spotted huge monitor lizards scurrying beneath beach huts and monkeys fighting by the lake. 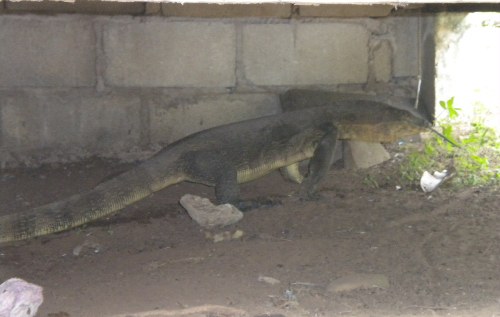 It was on my first evening that I learned about the infamous Monkey Beach with its clear water and beauty. Not realizing what hardship it would take to reach, my friend and I clambered up the rocks that promised to lead us there. Not only were the jungle paths twisted and rocky, but also the trees towered above us, impressing upon us how vulnerable and insignificant we were. In
parts we scrambled over large rocks or used ropes attached to rocks to haul ourselves over the all too frequent steep slopes. Due to the constant scuttling, rustling, croaking and shrieking that was never far away, we were very aware that we were not alone on this jungle walk.

We were proud of our progress and very much looking forward to arriving at our desired destination, but about half way through the trek, our pathway was blocked. The offender happened to be the biggest monitor lizard that either of us had seen and certainly the most menacing. Despite the fact that monitor lizards look like alligators, you can never get too close because they are so frightened of humans that they instantly flee. This monitor lizard, however, was quite different from others that we had dealt
with. He would not move because as far as he was concerned, it was his path, and we would not cross.

We considered our options to be either climbing over him or walking around him. To the left of the lizard-blocked path was a rock far too large to climb over and to the right was a precipitous slope covered by dense trees and thick undergrowth. On agreeing that we wouldn’t turn back and that we couldn’t wait around forever we proceeded with option one. With each step
I took, the lizard stamped and smacked his tail against the rock. Not too far from him I froze, scared that he would lunge at me, and then I retreated.

As the lizard persisted to swish his tail, hiss his forked tongue and stamp, we decided to leave the path in order to get around him. I didn’t stray far from the path before I heard rustling and my friend informed me that the lizard had turned to face the direction in which I had walked. Terrified he would follow me, I returned. At this point, I thought we would be stuck forever, but eventually after we pretended to leave, he moved. We crept past because we could hear that he was still close by in the bushes. As we passed he hissed loudly , so we ran with pounding hearts the rest of the way to Monkey Beach.

It was certainly a much more intense trek than originally intended, but once arriving at that deserted beach with white sand and turquoise water we felt this all made our previous distress melt away. Besides, diving into the cool water was more satisfying than ever.