In 1916 when Rueben Syrett moved his family of four, his wife MInnie, 8 year old son Carl, and six week old Amanda, to the wilds of Utah, his future career of extending hospitality to folks visiting Bryce Canyon had never entered his head. However, almost 100 years and 3 generations later, that is what he did and his family still does.

Ruby, as he was known, aimed to homestead on land of his own, loaded up their wagon and buggy and headed for the edge of Paunsaugunt Plateau in southern Utah, 25 miles from where he and Minnie had been born. Two days of travel covered the distance, bringing them to the top of Red Canyon and a beautiful view. A few weeks after his arrival a neighbor’s unexpected question hinted at the true treasure adjacent to the land he had bought. The neighbor asked if he had seen Bryce Canyon and commented that it was “just a hole in the ground, but Ruby should go to see it.” The next Sunday afternoon the family drove the buggy over to see the “hole in the ground” named Bryce Canyon.

They stood gazing at the site of the red, yellow, and cream formations in “the hole” and were astounded! Eager to share this unbelievable site with others, they began to invite friends to come to visit and to see Bryce Canyon for themselves. By late in that year the Syrett family found themselves offering food and a place to stay to their visitors.

By 1919, the visitors outgrew the Syrett home. Ruby erected a tent at the edge of the canyon for guests to stay, and the next year he built a lodge near Sunset Point in the canyon. He called the lodge “Tourist Rest.” Later Ruby added additional tents and a dance floor for entertaining. The main door of the lodge became an historic guest register of those who visited as guests carved their names in it. Little did they realize the historic significance of the recording of their visits.

This spring we were fortunate to be counted among those guests to Ruby’s Inn, still extending rustically elegant hospitality to Bryce Canyon visitors almost a century after Ruby’s meager beginnings. (Although we did not carve our names in the present door!)

“Tourist Rest” succumbed to the establishment of the Bryce Canyon National Park in 1923. Missing the contacts with guests, the Syrett’s built another lodge in 1924 on their own ranch and called it Ruby’s Inn. The huge stone fireplace in the lobby offered convivial warmth, as does the present one today. The motto engraved above the lobby fireplace originated from tales told around the earliest hearth’s warmth: “Tell your friends about me.” 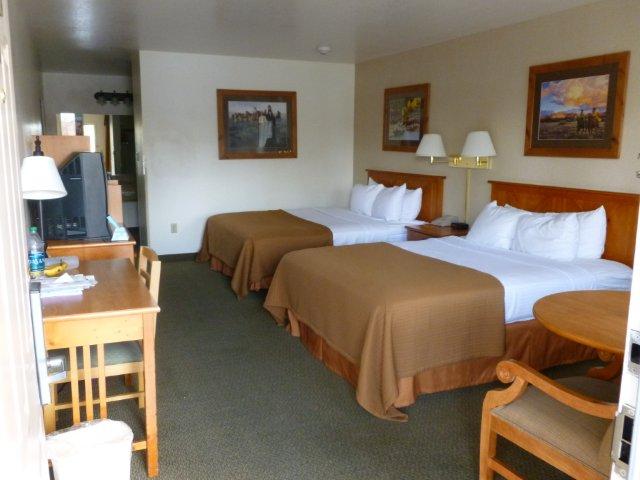 We discovered Ruby’s Inn, which is now modernized and greatly enlarged, met, under one roof, every need of our stay at the canyon area . We spent several hours during our stay browsing and supplying our needs in the well stocked General Store and in two gift stores offering beautiful souvenirs, books, jewelry, alcohol, and clothes at reasonable prices. The dinning room, named Cowboy’s Buffet and Steak Room as well as the entire lodge reflect the rustic decor of the West with unmilled, unpainted logs as structure beams, finished only in natural wood color. Entering the lobby reminds me of a visit to a taxidermy studio as artistically mounted heads of local animals surround the ceiling. 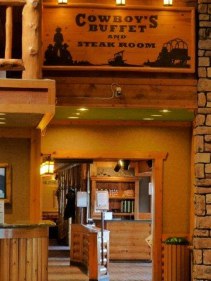 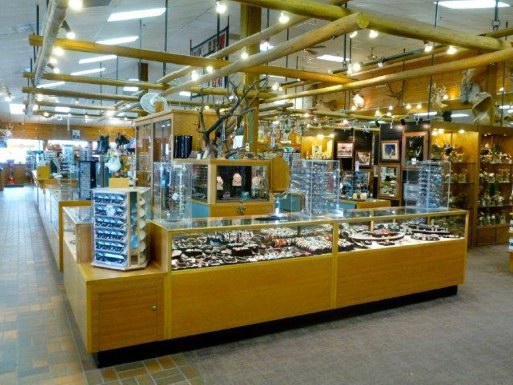 The restaurant offers a hot buffet and a complete menu at each meal. The buffets are delicious and adequate; tour buses frequently stop as a special treat for their guests. I found the restrooms spotless, convenient, and well stocked, meeting a frequent necessity for travelers! An additional treat hung along the halls and walls: old black and white photos of the Syrett family, visitors both famous and everyday, and significant memories of the Inn, all creating the visual story of this unique establishment.

Across the street, Ruby’s present owners extended their offerings with additional stores and shops, but these had not yet opened for the season at the time of our visit. An ice cream cone from one I observed would have been a welcomed treat as well as the Rock Shop and other interesting craft and gift shops! Gas Pumps provide this necessity of every visit. A Rodeo in season could be enjoyed by all family members.

The present Ruby’s Inn, having changed to meet modern needs offers a small lake, swimming pool, spa, cable TVs and phones in all rooms. It is open throughout the entire year, owned and operated by the fourth generation of Syrett’s. It is my joy to have followed the Ruby’s Inn’s fireplace motto and shared with you our delight in our stay at Ruby’s Inn during our visit to Bryce Canyon. It was so convenient to Bryce Canyon and to our other family who were staying adjacent to Ruby’s Inn in Ruby’s RV Park.