In late November of 20011, I traveled to Northern, Canada, to photograph polar bears in the wild near the Hudson Bay. Outfitted with all my cameras, especially my favorite, my 500mm lens with my 1Dmark iv camera, heavy snow boots and down jacket, I learned how to photograph in the frigid temperatures of the Northern Arctic. One has to be careful of battery consumption when shooting in freezing temps. We often removed our batteries, put them inside our sweaters next to our bodies to warm them up to last longer. We also had difficulty with lenses fogging up due to temp changes. 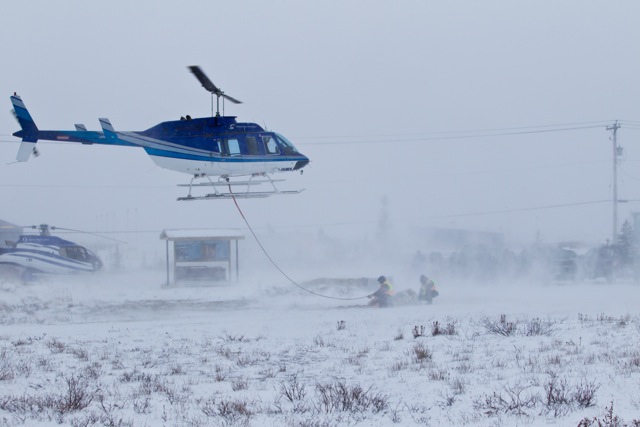 The polar bears hibernate most of the summer and move toward the bay around mid October waiting for the bay to freeze. The town of Churchill in northern Manitoba, braces for the presence of the bears as the town stands right on the shore of the Hudson Bay. The town’s polar police are activated and patrol the town’s periphery nightly. If a bear gets near the town, a warning blast is shot from a shotgun. This will often be enough. If the bear passes through the town’s perimeter, it is shot with a tranquilizer gun and taken to the polar “jail.” This jail can hold up to thirty bears. When a group is organized, the bears are again tranquilized, put on a truck, or else air lifted to an area hundreds of miles north. Under the watchful eye of a veterinarian, the bears are monitored until they awaken in their new homes. 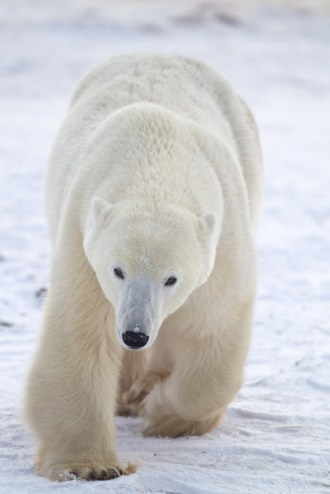 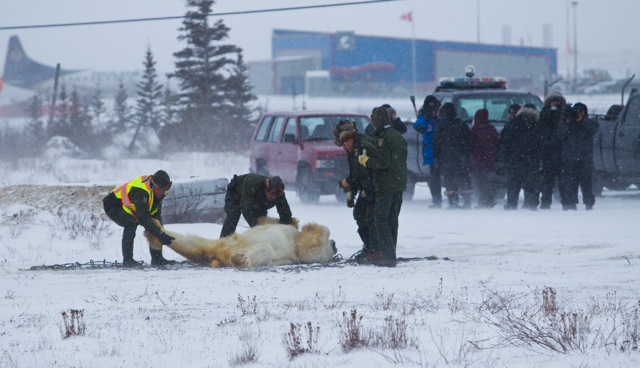 The bears that do not come through Churchill, eventually make it to the Hudson Bay. Once the bay is frozen, the bears grab on to a piece of ice and float out to deeper water wmye they hunt for seals. This feeding frenzy continues until spring.

Photographers like me were driven out to the protected polar bear areas in polar tundra buggie,s which stand high on ten foot wheels. Inside the buggies the temps barely went above freezing. Shooters are permitted to put their lenses out a window in order to have a clear shot of the animals. There was also a “back porch” where folks could stand and be up close to the curious bears. All visitors were warned never to attempt to touch a bear… they are so powerful and strong that they can rip your arm off in one swat. Polar bears are known to pierce 2 feet of ice to capture seals swimming beneath the ice. I was able to capture extreme close ups of polar bears, adults exercising and mothers with cubs. During the time I was in the arctic, we experienced a blizzard with temperatures dropping to below -30 degrees.

Black bears are also a passion of mine. I have confronted a few bears at the Smokey Mountains National park, but this year I headed up farther north for a bear workshop. I went to the Vince Shute Wildlife Sanctuary.

Located near Orr in northern Minnesota, the sanctuary today is the home to numerous black bears in a very special meadow.

During the depression, Vince Shute was forced from the struggling home farm to the forest to earn income to help support his family. He started a small logging company. During this time, the workers were often frightened by the presence of the black bears in the logging camp. After years of killing the bears, Vince noticed that the bears did not want to harm the humans, just eat their food. So to co-exist, Vince started to feed the bears. The bears remained wild, but learned to cohabitate with man during those trying times. As the years went by, Vince was concerned for the bear’s future once he passed away. A group of nature loving folks got together and formed the non-profit American Bear Association which now supports the sanctuary. People began hearing of the bears in the meadow and many wanted to witness the bears in the wild. I did too.

I was amazed to see so many bears in this meadow. There are no fences and the bears are completely wild. However, they know that man will not harm them in the meadow. As a photographer, it gave me ample opportunities to capture their images as well as learn so much about their behavior. We learned to speak to the bears in low, calm voices and that the bears are just as scared of us as we are of them, probably more so. The cubs scampered up trees due to the presence of the large male bears. We never stooped down as this meant that we occupied the same space as the bear and that made them feel frightened. I inadvertently did stoop one time and a big black bear came right toward me. I stood quickly, spoke calmly, and backed away giving the bear lots of space.

Today, the sanctuary is home to hundreds of visitors who come to watch bears in the wild and learn about their behavior.

“The first bear I saw and photographed in the Smokies more than made my knees shake. I was so nervous that it took many shots to get one that wasn’t blurry from my hands shaking. At the Vince Shute sanctuary, I felt comfortable around the bears, although cautious, and was able to concentrate on capturing the moment.” 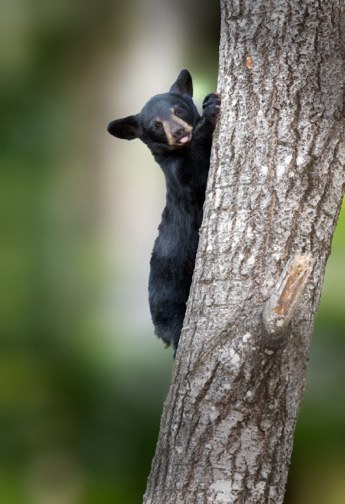