While in Prague we heard about the medieval town of Kutna Hora, located about 120 km from Prague, a drive through undulating, Czech Republic farmland. We were informed that Kutna Hora and the neighboring town of Sedlec are designated as a UNESCO World Heritage Site and well worth taking in as a side trip in conjunction with a visit to Prague, so we contacted the Prague tourist agency Premiant City Tour Travel Agency and booked our visit to Kutna Hora. Premiant City Tour offers a number of different tour opportunities in and around Prague, as well as places like Kutna Hora and Dresden, Germany.

We were picked up at our hotel in the morning of our departure for Kutna Hora and began our journey through what turned out to be a little over two hour journey on a comfortable bus through a snow covered landscape. Prague and the Czech Republic had experienced an unexpected, overnight snowfall for this particular, late autumn time of year. Between the commentary about the history of the region given along the way by the tour guide accompanying us and the views of the snow covered fields, forests and towns we passed, the trip to and from the town of Kutna Hora passed quickly.

We discovered that the area around the town of Kutna Hora was found to be rich in traces of silver in the 10th Century, bringing miners first into the area in the 900s. The medieval town of Kutna Hora was the site of the first Cistercian monastery in Bohemia, established there in 1142 AD. The town was, at the time, situated in the Central Region of Bohemia, which is now called the Czech Republic. The town competed with Prague economically from the 13th to the 16th century and was a favorite residence of many Bohemian Kings. 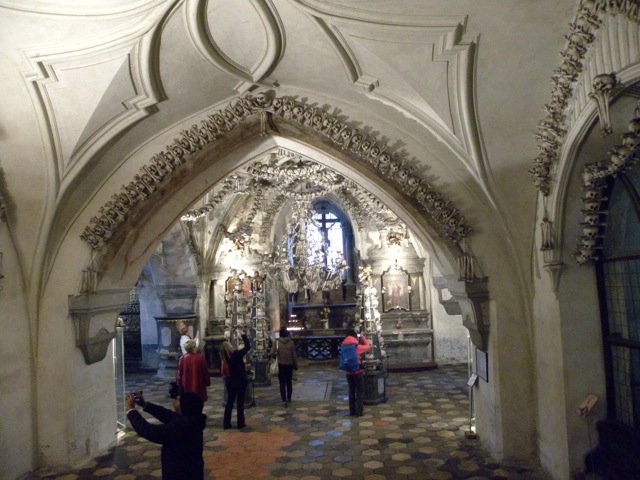 Our first stop on reaching Kutna Hora was the Sedlec Ossuary, which is a small Roman Catholic chapel next to the Cemetery Church of All Saints. The Ossuary contains the bones from an estimated 40,000 to 70,000 skeletons, which have been artistically arranged to decorate the interior of the chapel. The nearby cemetery became a popular place for burial when the abbot of the Cistercian monastery went to the Holy Land at the request of King Otakar II of Bohemia and returned with a small amount of earth he had removed from the hill in Jerusalem called Golgotha and sprinkled the earth on the abbey cemetery. During the 14th Century with the Black Plague sweeping the country, many thousands were buried in the cemetery. In the 1500s a half-blind monk of the monastery was given the task of exhuming skeletons and stacking the bones in the chapel. Through the years the bones were assembled into artistic decorations and became a great attraction.

After our stop at the Sedlec Ossuary we traveled over to the magnificent Church of the Assumption of Our Lady and Saint John the Baptist. The Church was built in a Gothic style at the end of the 13th Century. It was destroyed and rebuilt at the beginning of the eighteenth century in the style of the baroque. After the reunification in Germany and the independence of such countries as the Czech Republic the Church went through another restoration in 2001. The architecture both outside and inside is remarkable to behold.

A walk from the Church of the Assumption of Our Lady and Saint John the Baptist into the central part of the town of Kutna Hora took us over a bridge like structure that gave us a view of the hillside on which the town was built, the town, and the building known as the Italian Court. In the center of town, we entered the Italian Court, which was originally the Central Mint of Prague. Because of the silver being mined in the area around Kutna Hora, the town became a natural place to establish minting the coinage used in the Bohemian Kingdom, beginning as far back as the late 13th Century. The original mint became known as the Italian Court because of the Italian experts that were instrumental in the minting reform that took place there. The Italian Court was reconstructed at the end of the 14th Century and became a part-time royal residence. Our tour took us through the rooms in which the coin-makers workshops were housed around the building’s courtyard and up into the museum of coin minting, as well as through the royal chapel and hall of audience, which were once used by Bohemian Kings.

Having gone back in time in this UNESCO World Heritage site and viewed history taking place through a period of almost 900 years covering all aspects of society, we were amazed at the wonderful experience we received from our visit to Kutna Hora and how lucky we were that someone had recommended this tour to us. We also found that instead of hampering our trip to Kutna Hora the snow was like icing on a cake, giving the experience a heightened effect.