To many people, Monticello and Charlottesville, Virginia are synonymous. Indeed, even more than his famous home, the presence of Thomas Jefferson the Man can be felt throughout the quiet college town, about a three-hour drive from Washington, D.C.

For any history buff, a tour of Monticello is heaven, but even those less historically inclined will be enthralled by fascinating displays of Jefferson the Creative Homeowner. In fact, Jefferson — governor, ambassador to France, secretary of state, and the third president of the United States — when asked his profession, replied: “I’m a farmer.” Indeed, gardening and architecture, two of his life-long passions, are reflected throughout his beloved home and grounds.
Few homes anywhere more accurately reflect the personality of their owners than does Monticello. From the time his vision began as a young bachelor to his death as a widower with 12 grandchildren, Monticello remained at the center of Jefferson’s heart. He was responsible for almost every detail of its design, construction, furnishings and remodeling, a process that spanned over 40 years.

The fact that about 75 percent of the furnishings are original helps bring to life the sense of Jefferson the Private Citizen. For example, handsomely adorning a wall of the front entrance are several sets of antlers that Lewis and Clark brought back as personal souvenirs from their famous Louisiana Purchase expedition — no easy task considering the travel conditions of the time — commissioned by then-president Jefferson in the early 1800s.

Many innovations designed by Jefferson, influenced by his years in Paris, were ahead of their time. Doors that automatically open continue to operate today, 190 years later. A seven-day wall clock which indicates both day and hour still chimes. Jefferson introduced dumb waiters, first seen in a Paris cafe, to Virginian society, as he did skylights, twelve of which shed light throughout the mansion. And a desk constructed to display five open books at a time attests to Jefferson’s renowned literary prowess.

Even the dinners he served, prepared by a slave who was trained by a French chef, reflected Jefferson’s cosmopolitan tastes. A list of guests reads like a Who’s Who of early American history. The statesmen, politicos and socialites who walked here before you — among them James Monroe, James Madison, Daniel Webster and, of course, the Marquis de Lafayette — wrote many a chapter in our country’s history over coffee and brandy.

Interestingly enough, the many political positions he held meant little to Jefferson. Writing his own epitaph, he focused instead upon three accomplishments: Author of the Declaration of Independence; Author of the Statute of Virginia for Religious Freedom, and Father of the University of Virginia. The latter becomes more than self-evident — to borrow a favorite Jeffersonian phrase – once you get there.

A visit to the University of Virginia brings you back to modern times — but only for a moment. Jefferson’s vision of his “Academical Village” became reality during 1817-1826 and the University continues to function much as its founder intended. Welcome back to the 1800s.

In addition to offering arguably the finest education among public institutions available to capable students “regardless of wealth, birth or other accidental condition or circumstances” — producing more Rhodes Scholars than any other state university — UVA maintains a tradition of student self-governance, including a student-run Honor System (that, unlike some, actually works – at least most of the time…).

Although the University has expanded since Jefferson’s time — the initial student population of 40 has grown to over 20,000 — Jefferson’s original buildings remain much as they were. The Rotunda, a scaled-down version of the Pantheon in Rome, was designed to maintain architectural balance in harmony with the five Pavilions on either side, which house classrooms and faculty residences. The original library it housed was considered a temple to knowledge rather than religion.

Jefferson envisioned a scholarly community where students and professors live in close proximity to share knowledge and together nurture a life-long commitment to education. To help achieve that goal, he intermingled students’ rooms among the Pavilions, connecting them with low colonnaded walkways.

The expansive Lawn between the two rows of buildings and the serpentine walled-gardens weaving in, out and around the Pavilions provide quiet space for personal reflection and personal connections between teacher and student. This was a radical approach to education at the time. 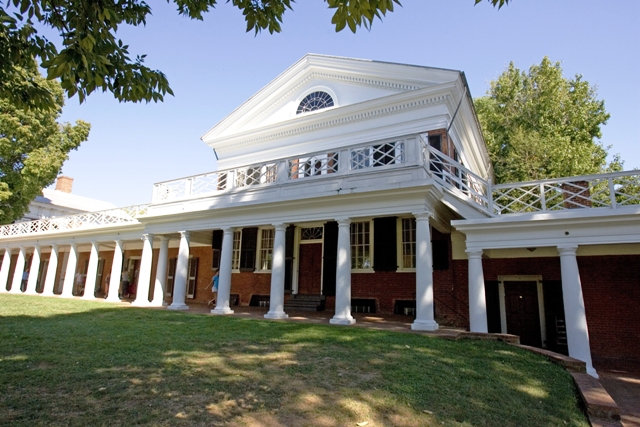 Jefferson’s “outdoor classroom” afforded both students and faculty the opportunity to experience first hand examples of classical architecture not readily familiar to the American public. The stately columns forming the Pavilion’s facade reflect Ionic, Doric and Corinthian models of Greek and Roman temples. Attesting to the durability of Jefferson’s forward-thinking aesthetics, the American Institute of Architects has proclaimed the Academical Village the most significant architectural achievement in the nation’s first 200 years.

The 54 student rooms along the Lawn are astonishingly unchanged since the University opened. The 15-foot-square rooms contain a wooden bed, an old-fashioned secretary’s desk, fireplace and a small free-standing wooden closet which contains a sink. Other plumbing facilities — minor amenities such as showers and toilets — are located a bracing winter’s walk away.

Upon first viewing, I assumed they were just another historical attraction that recreates living conditions — in this case, of students — in the early 1800s. Imagine my surprise to find that students today actually vie for the honor of living there! A select few fourth-year students who have made substantial contributions to the University are chosen for the opportunity to closely approximate the lifestyle of the scholars of the day who lived and studied in these same rooms. 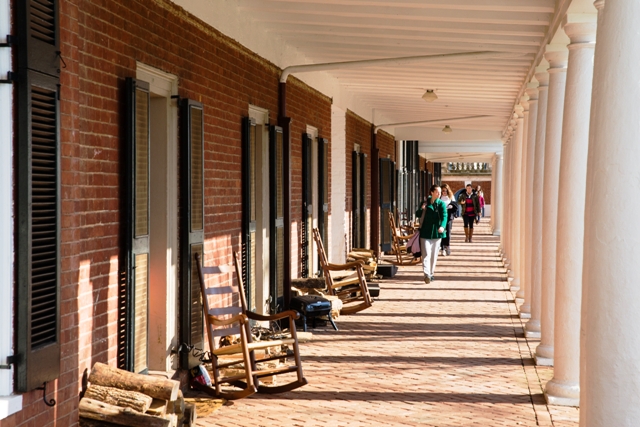 It is not surprising that Jefferson invested so much heart and soul into his final triumph. The University embodies Jefferson’s three greatest passions: his vision as an educator, his talent as an architect, and his skill as a gardener. Even more so than at Monticello.

The very essence of his dream — the interactive student/faculty community, the student-run University governance, the personal code of ethics — still permeates how campus residents think and act today. Thomas Jefferson is alive and well and still attending the University of Virginia.

As he is throughout the rest of the area. Walking tours trod streets upon which Jefferson no doubt frequently strolled, past businesses, taverns and other local establishments he patronized. It is with good reason that Charlottesville and environs are often so lovingly referred to as Mr. Jefferson’s Country.

A stay at the venerable Boar’s Head Inn, built in 1965 with a restaurant dating back to 1834 and now owned by the University, continues the connection with Jefferson. Famous for his healthy lifestyle, Jefferson studied the healing properties of many herbs and botanicals – and these same plants are currently being incorporated into spa treatments designed to treat specific ailments. As promoted by the resort: “Where the past combines with the present to make a healthier future – while making your experience historic.” Jefferson still lives at Monticello, studies at UVA and relaxes at the Boar’s Head Spa… For more information, go to visitcharlottesville.org or boarsheadinn.com.