Genève, Switzerland, a rather small city of 186 000 inhabitants is the world center for diplomacy, the birthplace of Red Cross and Geneva Conventions, and home to the United Nations and numerous international humanitarian organizations. Located on the bank of Lac Léman – the largest lake in Europe – surrounded by the Alps and Jura Mountains, Geneva is green, architecturally beautiful, and pedestrian-friendly. Geneva residents are well-educated and open-minded, speak three or four languages, hold important jobs with the 171 diplomatic missions, 35 international organizations linked to the UN, or 250 non-governmental organization. Their quality of life is higher than in some of the richest European capitals.

I flew to Geneva from Zurich in the first class of SWISS. At the airport, I picked up a free train ticket to the city, available to all visitors. Soon I was observing a snowy peak of Mont-Blanc and Jet d’Eau – a 140-meter high water jet in the middle of the lake – from my luxurious room in Hôtel Le Richemond in the 1875 building, previously enjoyed by Marc Chagall, Charlie Chaplin, Louis Armstrong, Rita Hayworth, Sophie Loren, and Andy Warhol. A Geneva Transport Card, handed to me (and all other visitors to the city) at check-in, allowed for free use of public transportation, including boats, and I made a plan to ride closer to the Lake Geneva’s water jet, and explore other attractions.

A strangely archaic construction in a little park under my window attracted my attention. It was decorated with Gothic columns and sculptures, and “guarded” by mythical griffons. As I’ve learned the next day during my city tour, this copy of the 15th century mausoleum in Verona, Italy, was built in the 1870s, and contained the mummified remains of the infamous Duke of Brunswick Karl II, whose rule was severely criticized not only in his native Germany, but also in Paris and London. A corrupt and inept ruler, the Duke had poor physique, questionable mental health, and suffered from a phobia of being buried under ground. Spending the last years of his life in Geneva’s Hôtel Beau-Rivage, he left his enormous fortune to the city in exchange for being buried above the surface. The Duke’s burial funds were also used to erect several cultural landmarks, like the Opera House and a music conservatory, where composer Franz Liszt used to teach.

As fate would have it, the same opulent hotel became a place of death for another royal person – a sensible, good looking, and popular with the people Empress Elizabeth (Sissi) of Austria. In 1898, an Italian anarchist fatally stabbed her in front of the hotel. Inside, there is a small memorial with her fan, gloves, and other belongings in a glass case.

The author of “Crime and Punishment,” Fyodor Dostoyevsky, had a sad stay in Geneva, where his newborn daughter Sophia, christened in 1866 Russian orthodox church with gold onion domes, died in 1868. Even before this tragic event Dostoyevsky wasn’t especially fond of Geneva, and called it in his letters “a cold, gray, and silly Protestant city.” It’s a well-known fact that the great Russian writer wasn’t famous for his tolerance. Luckily, Geneva is. 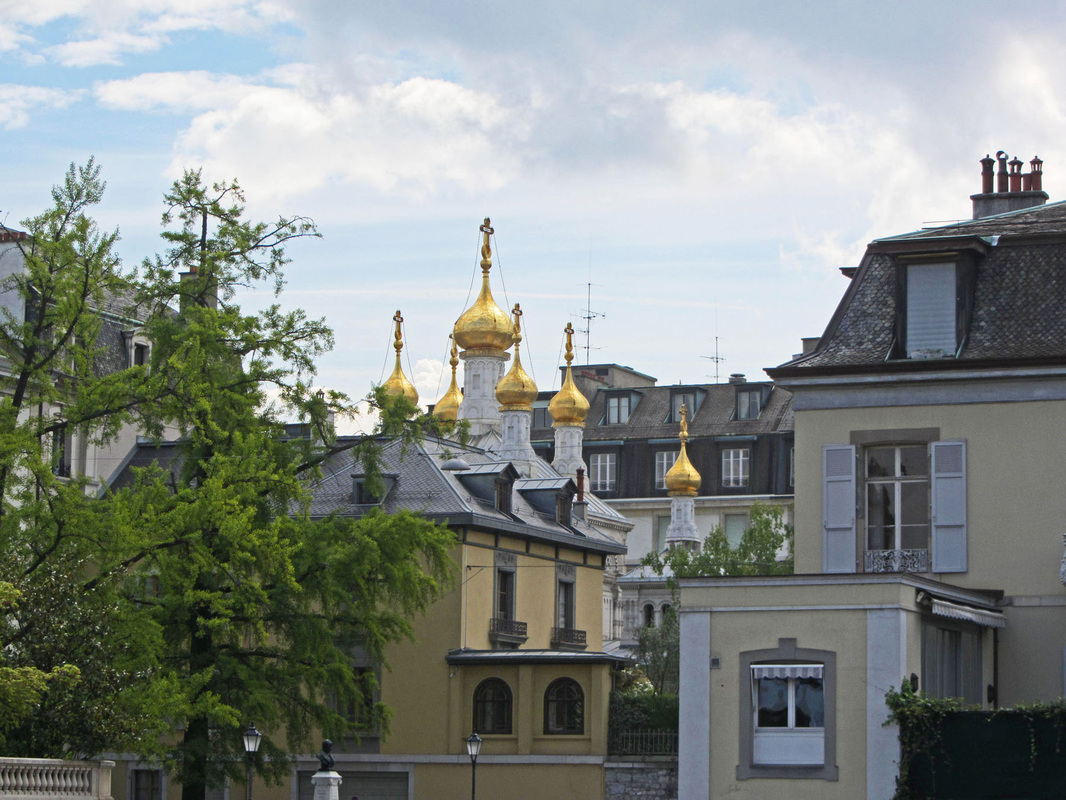 Humanism and appreciation for life have always been expressed in the views of Geneva’s prominent citizens. As many other places in the center of Europe, Geneva has a long and complex history, ridden with conflicts and conquests. The major difference lies in the fact that history lessons aren’t taught in vain here. In 1815, after the Napoleonic Wars, a diplomat and a state official Charles Pictet de Rochemont came up with an idea of Switzerland’s permanent neutrality, and in 1863, after the Second Italian Independence War, Jean Henri Dunant founded the Red Cross. In 1907, after a series of historical religious conflicts and political turmoil tied to the city’s transitions from French to Italian to German rule, and from Calvinism to Catholicism and back, Geneva adopted a law separating church and state, followed by the most progressive nations of the world.

As a result of its continuous policy of tolerance and neutrality, Geneva became the largest home for international organizations, and a prospering business and financial center. It’s “green” not only because there are 50 parks and wild life preserves in Geneva, but also because it rejected the use of nuclear power, and directed its efforts to the development of solar and hydraulic energy sources and the use of natural gas instead of coal.

All these and other amazing facts I’ve learned during the walking city tour which took me to the Old Town around the St. Peter’s Cathedral with its 157 steps to the top of the tower; the Reformation Wall – tribute to Europe’s reformers in a magnificent park with old chestnut trees; the largest in Switzerland modern art museum MAMCO, and Quartier des Bains – a contemporary art district with 12 galleries and five larger cultural institutions, and to the Flower Clock that shows the exact time of day in live blooms.

In the city with the centuries-old tradition of watchmaking, I took a tour of the Patek Philippe Museum filled with the wrist watches, pocket watches, pendant watches, brooch-, ring-, and fan watches, enamel miniatures, and musical automata created by the most prestigious brand, founded in 1839.

Overwhelmed with the impressions of the day, I had a very traditional dinner at the 18th century Brasserie de l’Hôtel de Ville in the Old Town. My three-sausage dish, Trilogie genevoise was nicely paired with Calvinus beer… 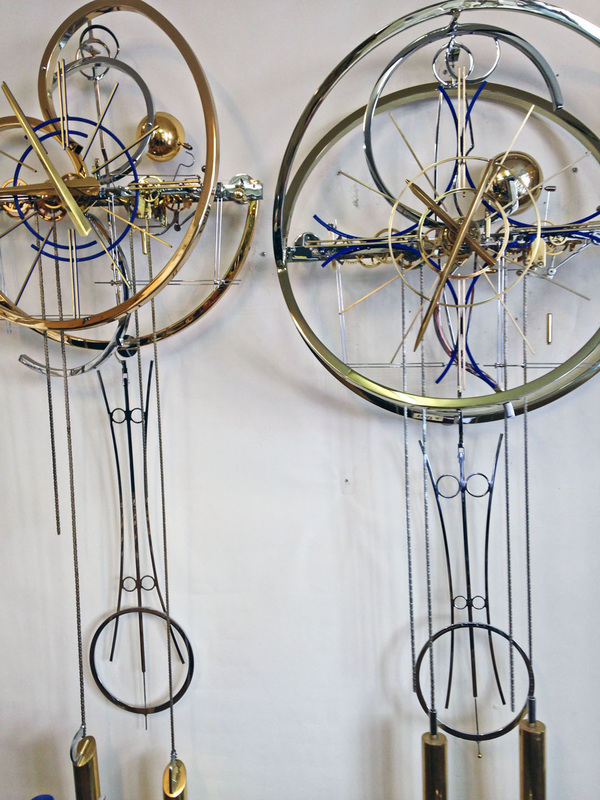 Next day I visited the 18th century Italianate village Carouge. My tour guide took me to an award-winning artist-watchmaker; antique furniture repairman; a bookseller of women authors; a fragrant bath products shop; a tea shop, and a hand-woven textiles shop. At the market, I marveled at the brightness of summer fruit and bouquets of roses, peonies, and lilac. 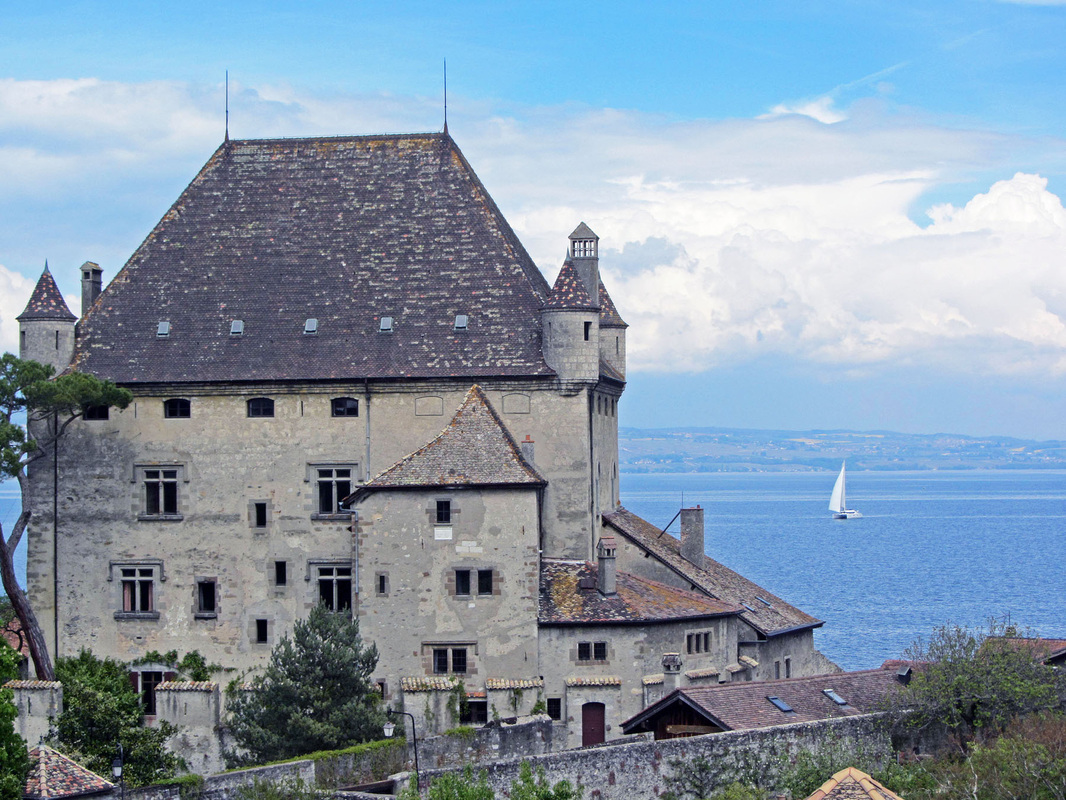 Then we boarded Savoie – a cruise vessel of SwissBoat on Lake Geneva, and rode to France! Thanks to no-visa passage between the countries, we had lunch in Yvoire – a medieval village with an old castle and cobblestone streets overflown with ivies, climbing roses and begonias.

And yet, the best lunch I had in my hotel, Le Richemond, where the chefs were trained by the world-famous celebrity Alain Ducasse. On an open terrace of Le Jardin restaurant, I enjoyed market-fresh salad with edible flowers; burrata ravioli in asparagus sauce with tomato confit, and a decadent chocolate macaroon. As if that wasn’t enough to make me feel happy and totally in love with Geneva, a plate of petit fours arrived, containing more chocolate and raspberry treats, and meringue cookies, a.k.a. “kisses” (la bise in French). More information at: http://www.geneva-tourism.ch.