In the city of Inverness the historic castle is used today for government business. It is a focal point of the pretty city, strategically placed long ago on the promontory over the River Ness. Traveling from Inverness toward the Isle of Skye in the western Highlands of Scotland, we came around a curve near the village of Dornie and pulled into the Lay-by for a picnic lunch and were surprised to view a large castle not far away at the convergence of three sea lochs: Loch Duich, Loch Long and Loch Alsh. Then we discovered we could tour this enormous dwelling! We were delighted, and my childhood fairy tale dreams of Sleeping Beauty and Cinderella sprang to life.

EILEAN DONAN CASTLE was first inhabited in the 6th Century and finally fortified in the 13th century. Because of many clan feudal uprisings it has been partially re-built in four different versions since then. In 1719 The Jacobite uprising destroyed this castle, which lay in ruins for the next two centuries. In 1911 Lieutenant Colonel John MacRae-Gilstrap bought Donan island, since it was part of his MacRae heritage, and spent 20 years rebuilding it to its former iconic image and added a footbridge to connect it to the mainland. There are forty National Scenic Areas in Scotland, and this is in the Kintail area.

The part of the castle open to tourists is furnished with historic pieces and very interesting information about this clan’s history and the castle. The castle furnishings are beautiful and the docents explain the way of life of the centuries past. One of the most amazing rooms is the lavish grand dining room, but perhaps the most memorable is the huge kitchen in the lowest level where manikins and an array of “foods” are set up as if the staff is busy preparing a banquet. It was very, very interesting and worth the price of under 10 pounds, depending on your age.

Members of the large clan of several living generations still come here on holidays and keep part of the castle for their private use. They are insistent that no one take photos, so we reluctantly complied. The family was in residence while we were there, and as we left I saw two very Scottish men dressed in Kilts and the full and genuine Scottish garb of their clan. I asked them if we could take a picture, and they said, “Sure, two crusty old chaps, but we need a Rose between us old thorns.”  They must be members of the MacRae Clan, but I did not ask.  There are many steps to climb, so the Visitor Center offers an excellent video for the convenience of those who cannot climb.

From the 13th century the castle belonged to Clan Mackenzie and Clan Macrae. Today Eilean Donan Castle is owned by the Conchra Charitable Trust, which opens the castle to visitors from whom the money collected goes to preserve and maintain the historic edifice. The Trust was established in 1983 and the Trustees have personal and family connections with the Castle and the area. Historically the MacRaes are hereditary constables of Eilean Donan Castle.  Mrs. Marigold MacRae is president of the Clan MacRae and her daughter Baroness Miranda Van Lynden is head of the MacRaes of Conchra.

DUNVEGAN CASTLE on the rocky shore of Loch Dunvegan is a MUST SEE in the southwestern area of Isle of Skye. It is the oldest continuously inhabited castle in Scotland and has been the ancestral home of the MacLeod Clan Chiefs for over eight centuries. The elegant rooms are high-ceilinged with magnificent furnishings, priceless paintings by masters, incredible tapestries 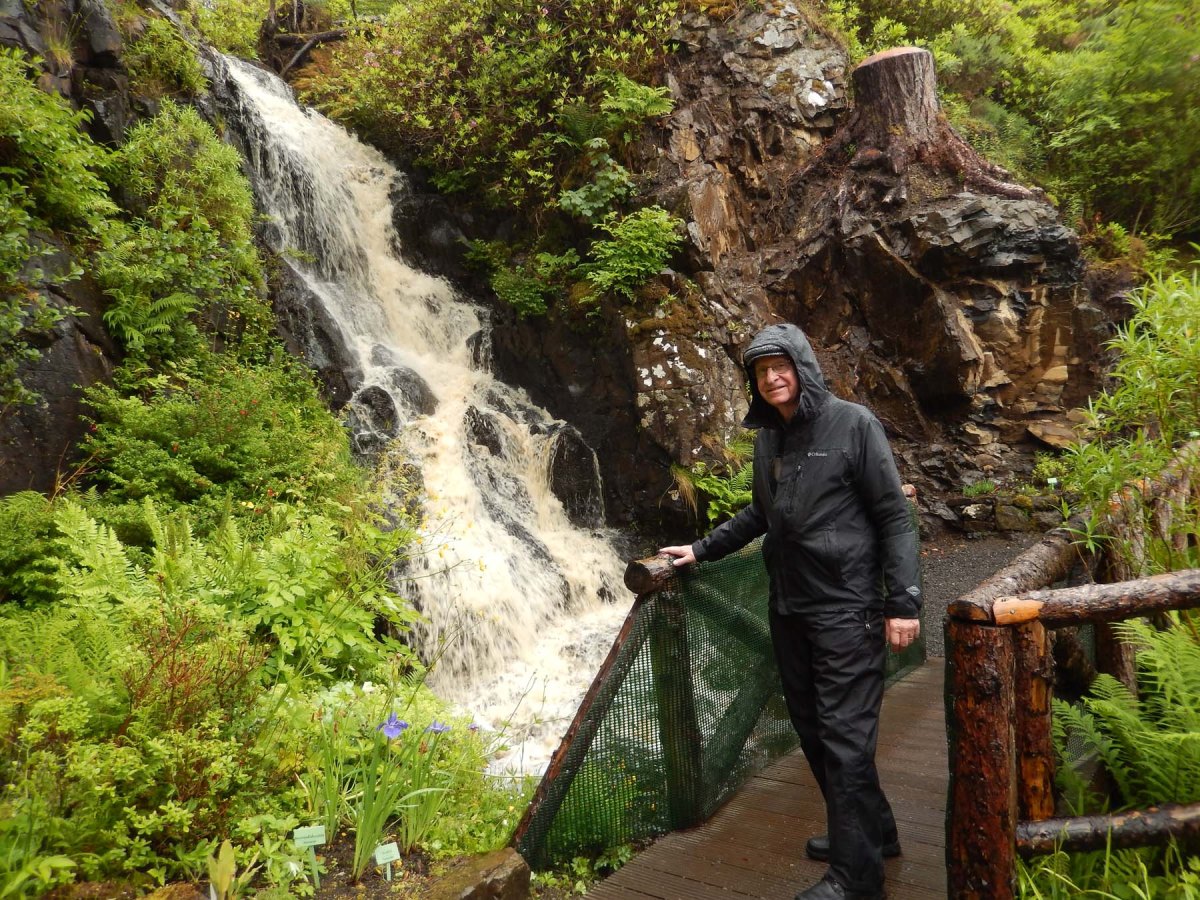 This impressive castle has an amazing five acres of formal gardens, dating from the 18th century and well-maintained to charm visitors with its unique beauty. The gardens were designed as many unique areas. These include the Walled Garden, Woodland Glades, Waterfalls tumbling into gurgling pools and Streams flowing to the sea just beneath the gardens. The Water Garden is set with ornate bridges and islands planted with a large variety colorful species. Even in the rain we enjoyed wandering through these and the formal Round Garden. Our eyes delighted in the diverse range of plants and flowers and the cool water lily pond.  There is a seal colony and a boat to take visitors to view it. You can rent lovely holiday cottages on the property, or take a clinker style boat on a day fishing excursion. And you can choose one of four restaurants in which to dine. Many distinguished and noble guests have visited here, including Queen Elizabeth II. And you can too!

Be sure to purchase your Clans and Castles Heritage Pass before you go to Scotland for a discounted price to tour many of these amazing historic places.  The passes are not available in Scotland.