In the early years of man on the continent, an expedition took place that is now called “The Worst Journey in the World.”   In 1911, three members of the Scott party undertook a separate mission, in the name of Science.  While the rest of the party was hunkered down, Apsley Cherry-Garrard, Bill Wilson and Henry “Birdie” Bowers traipsed all the way across Ross Island in search of Emperor Penguin eggs from the rookery at Cape Crozier, in the dead of winter.  It was dark almost the whole time, it got as low as -70 F and they had to manually hall all their gear.  They lost their tent (it was later recovered) to a huge storm and only miraculously survived the ordeal. The whole account was later penned by Cherry-Garrard who eventually made it back to England.  In the account, titled The Worst Journey in the World, Cherry-Garrard tells that one of the biggest problems was lack of sleep and that they would often fall asleep while marching and bump into each other.  Part of the problem for Cherry-Garrard was that he was severely near sighted, but could not wear anything to correct that because his goggles kept fogging up.   It was too cold and too harsh to fall asleep – what a nightmare.

I sometimes had trouble sleeping. Sometimes it was too hot in my room; the central heating was turned up too high and I couldn’t adjust it.  Sometimes my roommates were snoring too much or setting their alarms for too early.  Sometimes when I came in for my lunch hour to have a 59-minute nap my roommates were already there, watching TV while having their lunch.  Sleep was hard to come by even though I was often very, very tired.  Do you think Cherry-Garrard would have had sympathy for my plight?

The US Antarctic Program has two other main bases (apart from McMurdo) in Antarctica as well as various field camps and research vessels. There is the Amundsen-Scott South Pole station, named in honor of the two expedition leaders of the “Race to the South Pole.”  One of the two (Scott) not only lost the race but died in the process.  Talk about a bad year.  Another base is located on the Antarctic Peninsula (the South America side of the continent) and is named Palmer Station after Nathaniel Palmer, an American seal hunter who was one of the first people to ever see Antarctica.

I don’t know much about those bases because I did not visit them. I know that at the South Pole they need to conserve water and are limited to only two-minute showers.  I know this because longer showers were a popular topic for Pollies (inhabitants of the South Pole base) returning from months at Scott Base.  I know that at the South Pole it is cold (duh), averaging between -18F in the summer and -76F in the winter.  Palmer, on the other hand, is much “warmer” with a temperature range of 36F in the summer and 14F in the winter.  I know that the other two bases are much smaller with Palmer having about 44/20 inhabitants (summer/winter) and the South Pole having about 225/80.  I also know that the South Pole station has a radio.  I assume any base in Antarctica has one but I know for a fact the South Pole does because I called them.  When I went to Happy Camper School one of the exercises was to figure out how to work the emergency radio.  As a test, we called the South Pole.  Lacking another question or reason to communicate with them, we asked them how the weather was.  Not surprisingly, it was cold.  Other than that, I know little about the other bases. 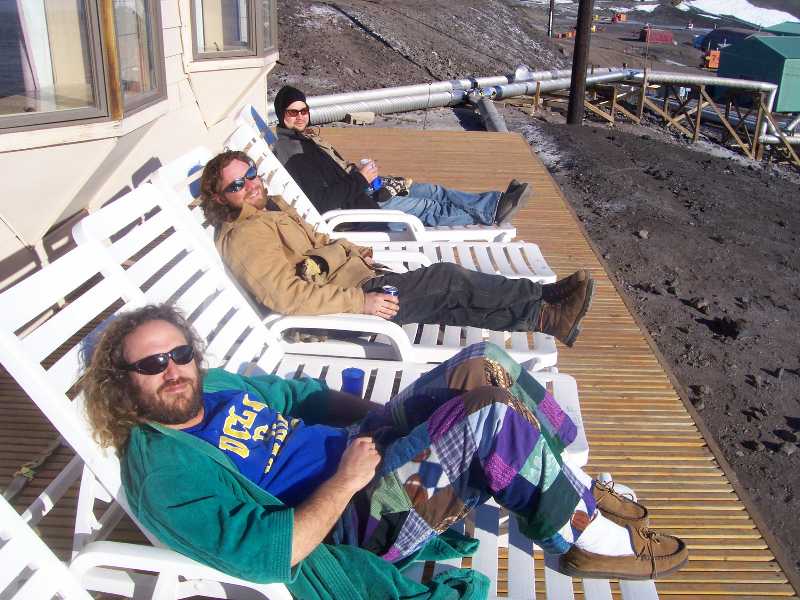 McMurdo, where I lived, is a downright metropolis in relative terms. Approximately 90 percent of USAP participants reside in or pass through the base.  Essentially it is Downtown Antarctica.  As a result, the bulk of the American facilities are located at McMurdo.  Again, I cannot really comment on the other bases but I think McMurdo has the widest array of activities.  The base has many distractions from the cold, bleak continent.  The continent itself is huge and should offer plenty to do and see.  But in reality your average worker gets to see so little of it and is mostly confined to base, hence the distractions.

Sometimes in order to break the monotony, to stop the insanity, you just had to laugh. Anything to take our minds away from the doldrums of cleaning was welcome. You had to do something silly or off-the-wall to make yourself not go crazy- stir crazy, I guess.  Every so often, at our daily 15-minute stretch break, Anna would unofficially lead us in the fake laughing exercise.  The theory being that if you start out fake laughing in a group it will eventually turn to real laughing and real laughing is good for your overall health.  It worked, well the turning to the real laughing anyway.  I really don’t know if it helped my overall health.  The funny thing about Anna leading it was that her disposition normally was (and before I say this, let me say that liked her a lot) well……..bitchy or grumpy, I can’t decide.  But it was part of her image, I think, and I didn’t hold it against her.

Also sometimes in order to get yourself to smile you had to do what Roxanne did one day. She had read that a smile helps your overall mood, even a fake smile.  The brain can’t tell if the smile is real or not.  So she decided during a particularly taxing day of work to walk around with a pen in her mouth forcing the corners of her mouth up.  She hoped that by doing so all day, she would force a smile even if it wasn’t real.

One day Jared and I decided it should be silly hat day. We were in charge of buffing the hall near the gear issue room.  That day some Recreation Department workers were doing an annual cleaning of the room and Jared and I peaked in to see what was up.  Because among other things gear issue was a costume shop, Jared and I saw what we needed to brighten our day.  He put on an oversized top hat (like the mad hatter) and for me it was a Viking hat.  We finished buffing the floor with a smile and we brought smiles to others passing by in the hall.  As I said, if you didn’t go a little insane, you risked going insane.

So the Recreation Department was responsible for a lot of what we had to do down there. However, a lot of our activities were self-created.  Some of the things to do we created on our own are as follows:

I don’t really have all the details on this one but it was an excuse to drink. Janitor Travis produced some ice near the end of the summer and said it was really old and that we should drink with it.  I was sold, and didn’t really listen closely for the rest of the details.  One of the main research projects down there that year was a company called Anadrill.  Their goal (I think) was to drill deeper than had ever previously been drilled (by someone other than Harry Stamper/AKA Bruce Willis-while saving the planet from asteroids) in hopes of obtaining cores that would give them some sort of information about something, or possibly something else.  Like I said I really don’t have the details about the project.  They did give a few lectures, but as you will see later I never really got into the science down there.

All I knew is that Travis showed up with baggie full of ice (not a drug metaphor) that he said had come from deep, deep down. It had been frozen before Christ was born and that seemed pretty cool (pun not intended).  So what else do you do when you are given something so old, other than pour scotch over it and drink it?  Shane, Gretchen, Joe, Travis, a few others (I can’t recall) and I proceeded to get nicely sauced on Scotch and old ice.  Incidentally it was the first night I noticed that Shane and Gretchen had at some point gotten together.  It was like that down there, new couples popping up all the time but not always advertising it.  If you wanted to know such things you had to really keep up with your gossip or pay close attention to the subtle clues.  That night, the Scotch chilled by old ice, made Shane and Gretchen a little less subtle and I realized they had a little thing going on.

We tried to get Freezing Man going but it never really took off. In the summers of 2005 and 2006, (before the Ice, but actually seven times total) I attended the popular festival in the dessert of Nevada called Burning Man; the same festival that I told Oliver about on the plane.  There were about 10 (that I discovered) or so other “Burners” on the base and we tried to get things going to have a mini festival on the Ice.  The event is so unique that many people around the world have smaller events throughout the year that emulate the festival.  The events are in an effort to pass the time until the next year’s festival and they are called “decompression” events.  As far as we could tell, there had never been a decompression event on the Ice and we tried to get the ball rolling for one.  Coincidently, at Burning Man they do have a gathering for all people that have been on the Ice, which I attended in 2008 and 2009.  We even had one planning meeting for our Freezing Man but only a few people showed up.  It never really got off the ground, for one main reason I think.  The finale of the week long Burning Man Festival is the burning of a 50 foot tall image of a man, made of wood.  We had little hope that we would get permission to even burn a 50 centimeter tall man on the base and it sort of crushed the project.  I don’t know why we didn’t think of it, but it has since been pointed out to me (by my mother) that we should have simply built a Freezing Man of ice and allowed him to melt.  In the winter of 08/09 I heard some people did actually have enough motivation to get an event off the ground.  Good for them, I wish I could have attended but its sort of hard to fly in to McMurdo for the weekend.

Brian Birkenstein’s book “Cleaning up After Science” was published in August 2015 and is available on Amazon.com.