If you ever have even the slightest urge to commit a crime, visit Philadelphia’s Eastern State Penitentiary (ESP) first. I guarantee you, you’ll walk away a model citizen.  Maybe wandering through the crumbling cellblocks and examining individual concrete cells, punishment cells, and Death Row, will do that to you.  Yet at the same time, the prison walls radiate a haunting message of amazing mystical beauty and dignity.  It almost makes you think that there might be more stories buried away yet to be told. 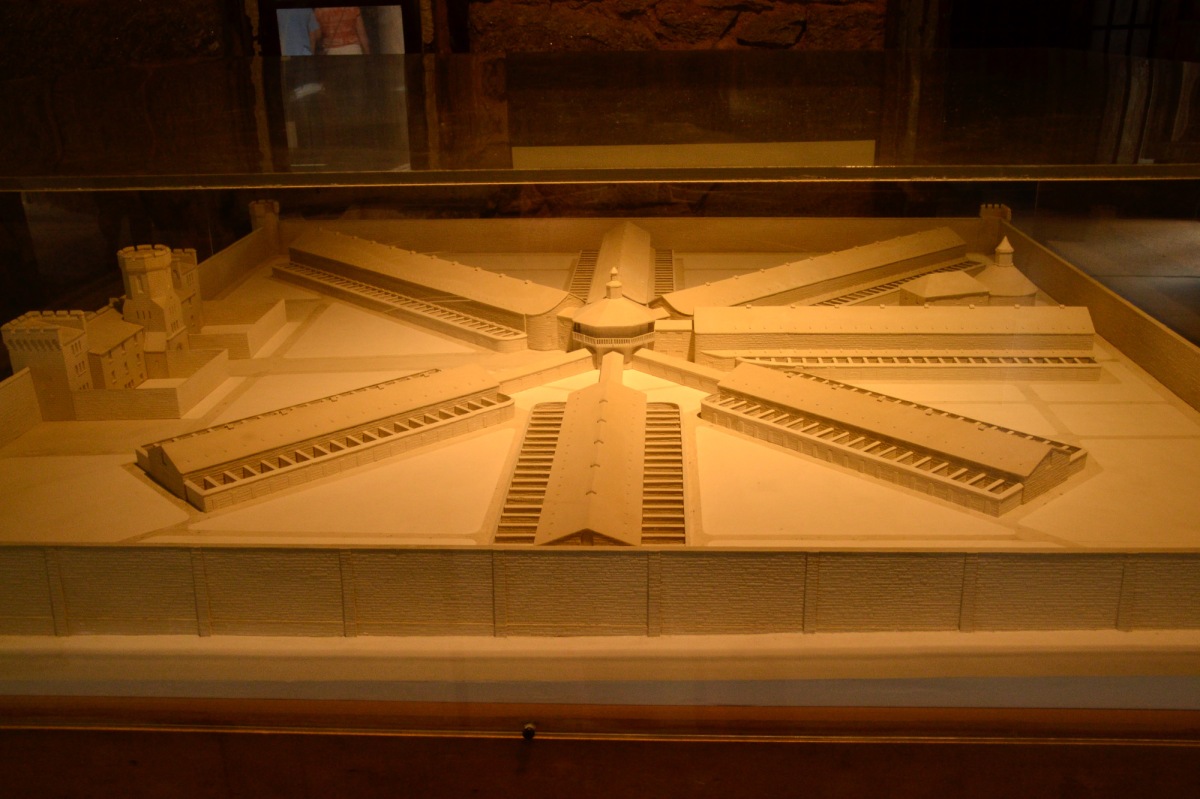 Eastern State Penitentiary opened in 1829, built to inspire inmates to feel shame and regret for the crimes they committed. The purpose of ESP was to abandon corporal punishment and help the criminals focus on spiritual reflection and change. 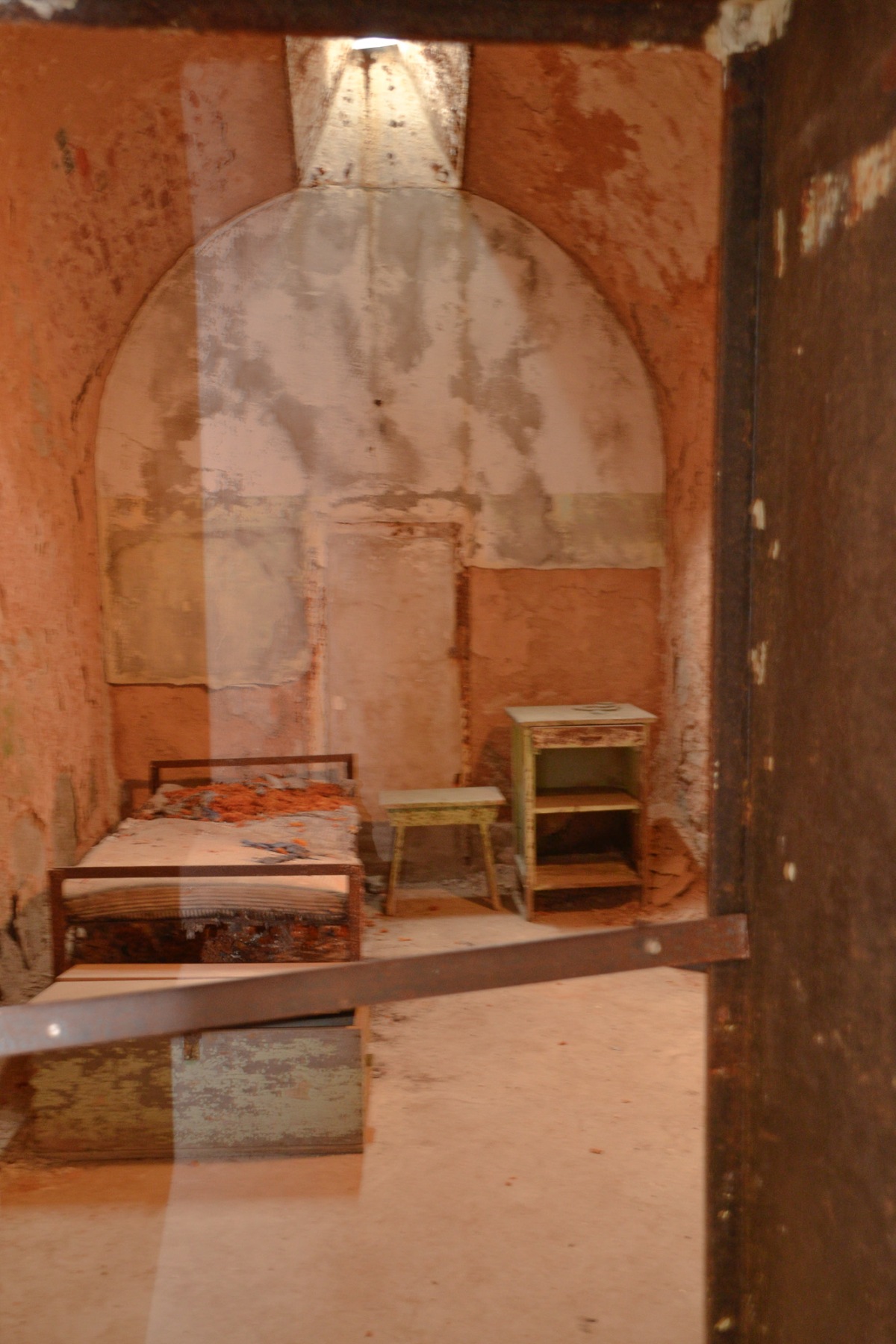 This Quaker-inspired method included isolating prisoners from each other. ESP originally had seven cellblocks that were spread out like the spokes of a wheel. Hallways had catwalks and skylights.  Each inmate had his own vaulted, sky-lit cell, centrally heated, with running water and a flush toilet immediately inside the cell doorway.  Adjoining each cell was a private outdoor exercise yard enclosed by a ten-foot wall guaranteeing that prisoners couldn’t talk to one another.

In addition to not being allowed to talk to other inmates, prisoners were also not allowed to read books, receive visitors or speak to the guards. Their meals were delivered to them in their cells by guards through “feeding doors.” Living and working in solitary confinement was meant to help each prisoner become “penitent,” hence the word penitentiary.

Controversy followed as to whether isolating prisoners worked. Finally in 1913, the Pennsylvania System of solitary confinement for ESP prisoners ended.  More cellblocks were added and each cell housed two or three prisoners. Cells that had a door to an exercise yard were sealed closed.

In 1956, Cellblock Fifteen or Death Row was the last major addition to the prison. Apparently, as death row inmates at that time awaited execution for their crimes, Pennsylvania System prison officials no longer thought that prisoners could become “penitent” or capable of redemption.

Al Capone’s stay at the ESP from 1929 to 1930 is most visibly remembered because of the gangster’s comfy digs. The infamous Chicago boss was sentenced to eight months for carrying a concealed, deadly weapon.  According to news articles written while he was incarcerated, he lived in luxury, housed in the “Park Avenue” section of cells during his time at ESP.  One article said he shared a cell with convicted embezzler Bill Coleman, while another claimed his cellmate was a forger.  Capone’s cell was said to have been furnished with antiques, rugs, a French dresser, oil paintings, a smoking stand and a cabinet radio.  Not bad for life in prison.  But ESP administrators always insisted that Capone never received special treatment.

Another criminal mastermind, bank robber Willie Sutton, made headlines during his eleven year stay at ESP. He participated in a doomed tunnel escape in 1945 with 11 men.  “Slick” Willie and his prison gang dug a one hundred foot underground tunnel; several prisoners escaped, but Sutton was recaptured immediately. Sutton’s additional claims to shame included over 50 bank robberies and 3 successful escapes from prison.

My vote for the most interesting olden times crime and criminals at ESP goes to Joe Buzzard and his brothers. According to ESP records, horse theft was at one time the number one crime at the prison. Joe, the youngest criminal in his family, was considered one of the top horse thieves in the country.  The five Buzzard brothers, Abe, Ike, Jacob, Martin and Joe were all prisoners at ESP at some time during the late 1800’s to the mid-1900’s.

The list of noteworthy criminals and their crimes range from armed robberies by William “Blackie” Zupkoski, the self-proclaimed “Toughest Man in Philadelphia” to first degree murderer, Victor “Babe” Andreoli. Women joined the list of unforgettable prisoners as well.  Freda Frost was sentenced to 20 years after murdering her husband.  And Leo Callahan, imprisoned for assault and battery with intent to kill, was the only one out of 100 inmates to attempt to escape from ESP who didn’t get caught. In 1923, he and five other prisoners escaped over the East wall of the Penitentiary with a makeshift wooden ladder.  All five men were eventually captured. Leo was never heard from again.  (No need to panic. If he were alive today, he would be over 110 years old.)

We couldn’t possibly have a story about a dilapidated, abandoned prison, without a few haunting ghost sightings. In the 1940’s, prisoners and officers alike described inexplicable images and unnerving experiences in the prison. Close to 60 paranormal investigation teams have found evidence of ghosts roaming around the almost 200 year old institution.

If you’re looking for adventure and thrills, visit the prison at Halloween. ESP’s Terror Behind the Walls kicks off a scary Halloween season by bringing the abandoned cells and ghostly inmates to life at night.  Each small group is led through six attractions inside the cellblocks, defenseless against the horrors of a dark, creepy prison, including being separated from the group, grabbed by a delirious “inmate” or tossed into a solitary punishment cell.

Today, the guard towers are empty and the cellblocks are crumbling. But a number of die-hard ghost hunters and paranormal investigative teams claim that the years of suffering endured by those who were incarcerated created an extraordinary energy that continues to linger in the cellblocks of Eastern State Penitentiary.

Terror Behind the Walls at Eastern State Penitentiary-see www.easternstate.org for fall schedule and prices.